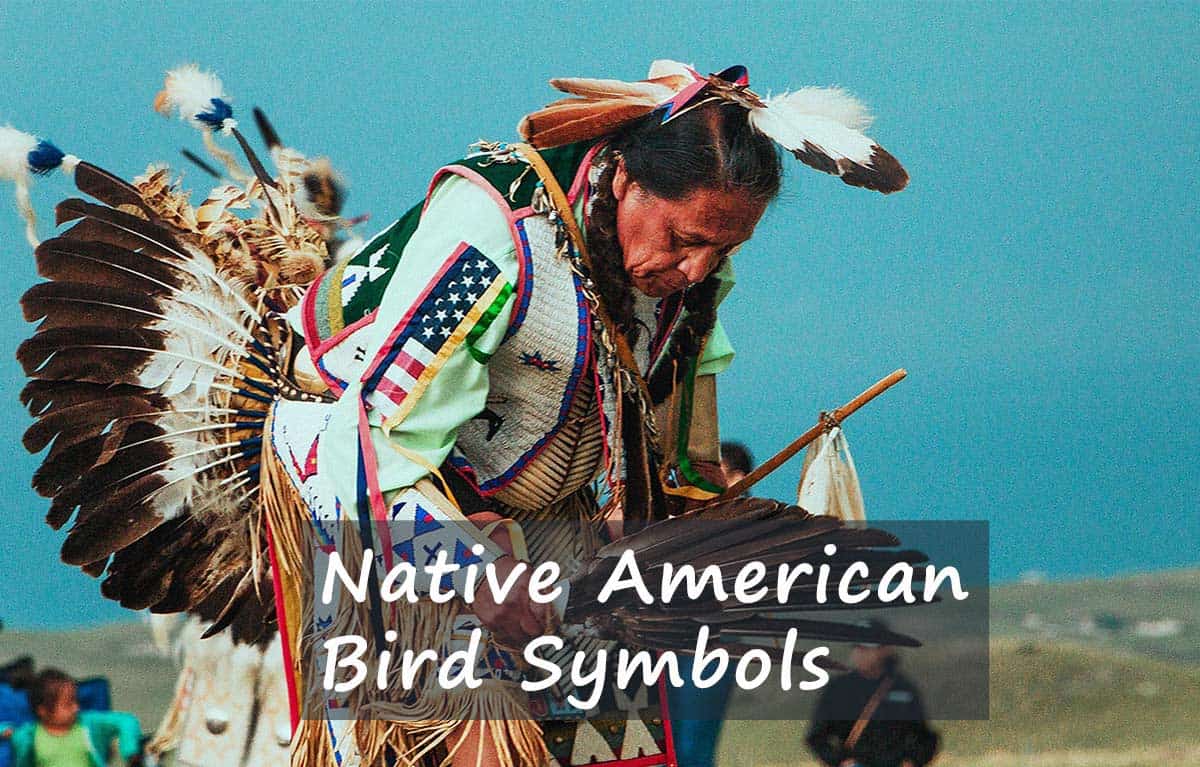 Native Americans used numerous animal symbols, including birds. A special meaning was given to those symbols and it was different in various tribes.

Native American Indians were deeply spiritual people and they communicated their history, thoughts, ideas, and dreams from generation to generation through Symbols and Signs. Their connection with nature was a part of their identity. Birds are probably the most mystifying symbols and many people are fascinated by them. Here we are going to answer some of the most common questions about Native American bird symbols and their meaning.

Symbols were used in Native American culture to pass down stories and events from generation to generation. Although different tribes attached different meanings to animals, including birds, they had some things in common. Animals represented spiritual guides and helpers in the material world.

Birds were considered to be the sign of ultimate freedom and connection to heaven. Birds have the ability to see clearly from above and represent the unattainable.

Some of them were symbols of change and a message from the spiritual world (incl. dead birds). Their feathers had a special purpose too, as it was used for rituals. Numerous totems representing birds were built by Native American tribes.

All kinds of birds, including songbirds and birds of prey, were a part of their symbol culture. Eagles and Crows are probably the most common ones, and they intrigue people even today, but also swallows, cardinals, or blue Jaybirds had meanings in their culture. Stories and legends were passed on about birds and their meaning in native American tribes.

The Eagle was one of the most used native American bird symbols. Depending on a tribe and culture, but also the specific situation, it represented war, protection, community connection, and even well-being. Eagle was a motive in many native American songs too. Eagle was a symbol of courage, wisdom, and strength.

They believed Eagles have the power of communicating with God and that it was capable to deliver messages from heaven to the people and vice versa. Feathers and bones were used for prayers. Eagles were believed to be the balance between the Great Spirit and the physical world. As an extremely high-flying bird, it had a special place in their culture.

Native Americans used this symbol on clothes and pictures too, not just totems. It shows the importance of a particular symbol.

Eagle also symbolized leadership and vision. He is connected to the eastern winds that represent spring and the renewal of life. He is a symbol of resilience and endurance. Eagles were there to inspire and make you overcome any obstacles, including yourself. They often represented victory and wealth.

Because Eagles had such great abilities, they were considered sacred among some tribes, and killing them, even for survival, was not permitted. In those tribes, it was believed that a person who kills an Eagle becomes a monster.

In some tribes, only the selected few could kill an eagle, and in some other tribes only during wartime. They all had in common that killing an Eagle was a huge deal. See also our post about the eagle feather meaning.

According to Native American legends, Phoenix is a bird that does not reproduce, it was here before any of us and it will be here forever. There was only one Phoenix, that originated from the beginning of Earth. Legend says that Sun shined upon its wonderful and bright feathers and decided that the bird has to live forever. Then the Phoenix became the victim of its own beauty, as it was constantly chased for its feathers. Not able to live like that, he flew far away into the desert. After hundreds of years, he became tired and old and decided to come back. He sang to the Sun but no answer was given. He wanted to be young and strong again.

Phoenix then made a nest upon a high tree and made an egg from myrrh. Sun finally heard his songs and shined bright. Phoenix transformed into fire. After the flames, the tree was intact and from the egg, a young phoenix emerged. He grew as tall and beautiful as his ancestor. He flew far away and he still flies today. Every 500 years, when Phoenix gets old and tired, he makes a myrrh egg and emerges from the fire as a new bird.

This legend is famous around the world and present in many cultures. The exact story varies from tribe to tribe, but the Phoenix represents fire and rebirth in all of them.

It is a connection between the Sun and fire, a symbol of strength and renewal. In a way, it symbolizes the Sun that sets every night just to be born again in the morning. Rebirth is an important part of nature. Water evaporates and then falls back again as rain, leaves fall off and grow again. There are numerous examples where the Phoenix myth can be used. And most important of all, it represents the rebirth of our own fallen spirit, every time a person changes for the better.

Among native American bird symbols, the Crow represents wisdom. Some tribes believed Crows have the ability to talk and that they were the wisest birds in nature. It was a sacred Ghost Dance symbol and it was believed that Crows guided ancient hunters. Dancers had Crow feathers as decorations during the ritual. Some tribes believed that during great floods, Crow feathers could lift them from the ground and take them to heaven.

The Crow was a symbol in numerous tribes and it is impossible to say just one meaning it had. Crows were a common symbol in totems and paintings.

Today, some people say the Crow represented death but it is completely the opposite. That is a common misconception about Crows in Native American culture. They were a sign of luck and a deep connection with Earth. They believed Crows were communicating with them and that they were conveying messages from nature to the people. Crows were considered to be keepers of natural laws.

Some believed Crows were able to shapeshift, from the spiritual to the material world.

All those seeking wisdom, at the crossroads in their lives, were influenced by Crows, who helped them find the answers they were looking for. Crows were able to bring inner peace, wisdom, and clarity.

Thunderbirds have a high place in native American bird symbols. It symbolizes power and strength and it is considered to have supernatural powers. The Thunderbird is a part of myths and legends in Native American culture. It is the most powerful spirit that has the ability to transform into humans by opening its head and removing its feathers. He represents a strong and protective natural force, able to produce thunders with his wings and lightning with his eyes. The Thunderbird lives high in the mountains and chases away anyone coming too close.

Thunderbird has the ability to create storms that bring rain for vegetation to flourish.

He appears as a symbol on numerous totems, always on top. The legend has it that Thunderbird requested that after helping tribes in need of food and water. Mostly he is shown with his wings wide.

Only the highest-ranking tribe members were able to use his symbols. We can find it in many pictures and native art pieces, even poetry.

Native Americans believed Thunderbird has a connection to the Underworld. It had the ability to connect all three worlds (Underworld, Upper world, and Earth).

[Video] Explanation of the Thunderbird as a Native American Symbol

Blackbirds were considered sacred among some tribes. Their symbols represented various meanings in different cultures. Some believed they are connected to the Underworld and that they are directional guardians.

Unlike previously mentioned native American bird symbols, Black Birds were not considered to have a great spiritual connection with humans. They were more of a mother nature sign to the people.

Native American symbols were used as bird tattoo motives, both in the past and today. As already mentioned, their connection to nature and the spirit world was a part of their everyday life. It represented who they were, and they expressed it by using symbols.

Except for displaying them on totems and paintings, sometimes they had drawings on their skin. Tattooing was considered to be sacred and spiritual. Symbols on the skin had deep meaning, and they connected the body with the mind, nature, and spirits. Tattoos were common for both men and women. Different rules applied in different tribes, and they limited the number of tattoos, symbols allowed, and tattoos permitted for people in different hierarchy places. Tattoos were made simple, usually consisting of dots and lines. Animal symbols were also used.

Birds had a special place in Native American culture, and they were used as tattoo motives in some tribes. For some, tattoos had only ornamental purposes, not spiritual ones. Tattoos were made on a person’s body during their whole life. First, they would be made at a certain age, and then after some accomplishments. Birds as tattoo motives represented the same values as they did as symbols on totems or paintings.

Birds had an important role in Native American culture. Many of their beliefs could be explained and passed through generations using bird symbols. The good and the bad, spiritual and physical, natural, and man-made, everything was connected by diverse symbols and myths about birds. Their ability to fly and see the world from above had a big role in creating symbolism. The beauty and mystery of it still remain intriguing to people today.