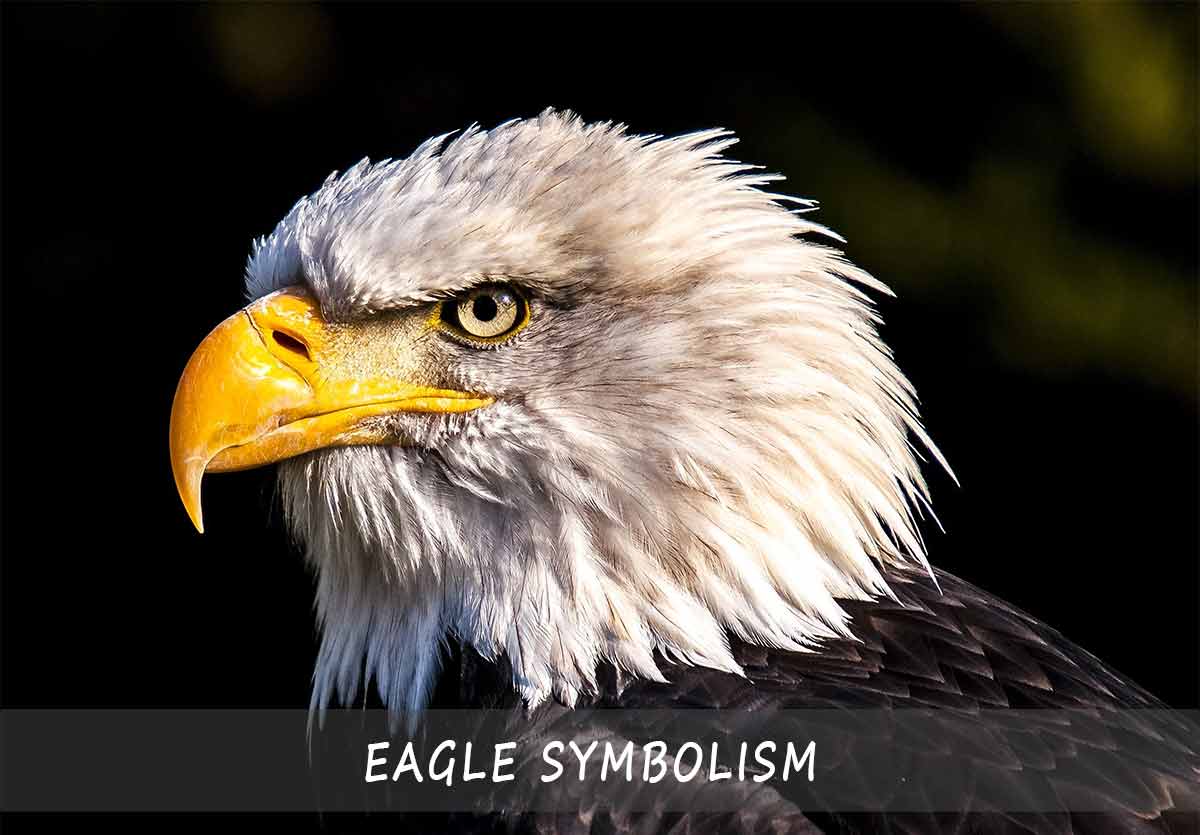 The eagle represents strength and is considered to be the chief among all winged creatures. It also represents a symbol of power and is associated with man’s relation to divinity. Getting to know about the same can help you to find the urge and drive within you.

This way, you can push yourself further, thus enabling you to reach greater heights. Also, you can view yourself and your life from a better perspective. You will also develop immense confidence in your abilities.

The eagle bird stands for resilience and power. Being the spirit’s message, it connects with your divinity. It also symbolizes dawn, rebirth, renewed life, and spring’s direction. People who experience difficult times can derive new stamina, resilience, and beginnings.

You may wonder what eagles represent as a spirit animal and spiritually! This spirit animal is mostly considered to be a powerful messenger. Being a powerful bird, it can soar great heights when compared to other birds. This means you need to look out for opportunities, identify genuine people and make progress constantly.

You may even dream of a double-headed eagle. If you do, it symbolizes power and dominion in heraldry and vexillology. This depiction is rather considered as a symbol of the eagle god. If you are born along with the bald eagle totem, then you may want to experience just about everything as much as possible. You may not hesitate to spread your wings to fly fearlessly in the sky and enjoy every project or adventure that you undertake. At the same time, you are likely to have one foot steady on the ground.

This bird can rise beyond unimaginable boundaries. It can be compared to people possessing the courage to achieve greater success and heights beyond comprehension. It also reminds us constantly that it is not possible for any bird to fly in the air forever. It needs to descend to the Earth at some point in time. It means, even after such magnificence, this creature has to come back to Mother Earth. It soars very high to touch the heavens. Similarly, it descends gracefully to reach its home on Earth. This means, although you enjoy greater achievements, you must remember your roots.

The eagle is regarded to be a spiritual animal by the Native Americans. These tribes were considered to be spiritual people. They passed their beliefs, theories, ideas, reflections, and thoughts to the next generations through signs and symbols. One Native American bird symbol is the eagle.

What does this animal symbolize exactly in their culture? The bald eagle or the golden eagle represents sacredness. These birds are known to fly the highest. Hence, the Native Americans are of the strong belief that these creatures are very close to the Creator.

In their culture, the eagle symbolizes courage, wisdom, and strength. It is also regarded to be the creator’s messenger. They also believe that it has strong connections with visions that one has in their dreams. People’s prayers are delivered to the Almighty Spirit who rules the Spirit World.

They hold the eagle symbol to be quite sacred such that as a custom they hold its feather aloft during prayers. Eagle feathers are also held by representatives in council meetings. This is taken as evidence of their telling the truth to the world about some occurrences or happenings. According to Native belief, even the eagle’s feathers meaning has a strong connection with the Almighty Spirit.

The Eagle in the Bible

Mentions on Eagle symbolism also has been made by Moses. He stated, ‘you have witnessed yourselves as to what happened to Egypt and how I used the eagle’s wings to carry you’. Moses describes how the Israelites were protected by God from slavery by escaping the Egyptians. God gives strength to people and provides them with eagle wings to gain strength and soar high as much as possible. God also makes it possible to carry the downtrodden as well as the weariest of the people to greater heights. He makes it possible for such people to achieve immense success and gain unimaginable prosperity (there’s also an Egyptian bird symbol).

The eagle is found to be steeped in Christian religious tradition. This bird in Christian art represents Christ’s resurrection. The reason is that the eagle in flight is considered to be a powerful one. It is stated to be an artistic symbol of St. John’s Gospel. It is also among the 4 animal symbols that were viewed by Prophet Ezekiel.

The German eagle symbol is associated with the National Socialist German Workers’ Party. The party symbol and flag had this powerful animal in it. The Germans referred to it as the Reichsadler. If the eagle is your spirit animal, then it is perhaps your calling to become courageous. You also need to stretch your limits.

The Reich’s national emblem displays the Swastika. An oak wreath encloses this Swastika image. On it is present an eagle having its wings spread wide! You may wonder what this symbol of the German eagle actually represents. The German Flag with the Bundesschild is rather an eagle present within the shield. It rather overlaps about 1/5th of the flag’s total length. Reichsadler is considered to be the heraldic eagle that has been derived from the Roman eagle. The Holy Roman Emperors were known to use this powerful spiritual winged animal as a symbol. It was also used in modern German coats of arms. It also included the Weimar Republic, the 2nd German Empire as well as the Third Reich.

Several cultures also consider the Eagle’s feathers to play a significant role. The Highland clan chiefs are known to use three eagle feathers to adorn their bonnets. It also showcases their ranks. Eagle feathers were also referred to with great reverence by the Native Americans. A feather was awarded to their warriors if they fought bravely in the war or won the battle. As the feather falls down on the earth, there is a strong belief in it carrying the bird’s energy. The natives also consider it to be a gift offered by the trees, sea, and sky. There can be unexpected arrival of feathers. However, there is likely to be some purpose attached to it.

The eagle’s feather is regarded with great respect and esteem. This bird according to Native culture is stated to be the bravest, strongest, and most powerful of all birds present. Hence, its feathers are respected a lot and symbolize what is the bravest, highest, holiest, and strongest. The feather also possesses strong medicine.

U.S. law recognizes the importance of its feathers as depicted in the Native American tradition, religion, and culture. U.S. law also protects this creature. However, Native Americans are allowed with some exceptions to pass down, possess, acquire and gift feathers of the eagle. But this is done within specific conditions.

Moreover, the feather is also presented to others to show respect and to honor the recipient. The feathers are then displayed with great pride and dignity, while managed with great regard. There are chances of the eagle feather falling down while dancing. If so, then before picking it again, there needs to be performed a special ceremony. The owner needs to be very careful to ensure the feathers are not dropped on the ground again.

It also adorns the sacred pipe as it symbolizes the Great Spirit. It is from this Spirit that power and strength flows. It is regarded to bless you with happiness, bravery, and prosperity if it is held over your head.

The eagle primarily is the emblem and the national bird of the United States of America. Hence, citizens of this great nation love to have the eagle as their tattoo on the different parts of their bodies. The eagle symbolizes focus, courage, strength, and power.

America’s Founding Fathers also found this powerful animal to be a great choice. It is also mentioned in several parables. The objective here is to drive high achievers to achieve greater heights and sure success. Besides representing power, this tattoo also has meanings that differ in various cultures and philosophies.

The eagle tattoo is rather used as a symbol of solid force, beauty, and purity. The tattoo is also sported popularly by the Native Americans. This is because they regard their spiritual power. Eagles, according to their culture are God’s messengers. This is because of their high flights. Thus by adopting this symbolic tattoo, they imagine connecting themselves with the Almighty Spirit (check out other bird tattoo meaning here).

Therefore we can state that Eagle symbolism is more about wisdom, power, and spirituality. Other cultures across the globe also have several interpretations of this symbol. The animal spirit offers guidance to people who believe in it. The eagle symbol also allows people to expand their limits, spread their wings, soar to great heights, and broaden their outlook and perceptions.

Some of the birds of the eagle species are endangered and almost extinct.

Also read here about: How High Can An Eagle Fly? In another post, we also compared the owl vs eagle. Also, the eagle made it on our list of animals that stand for loyalty.