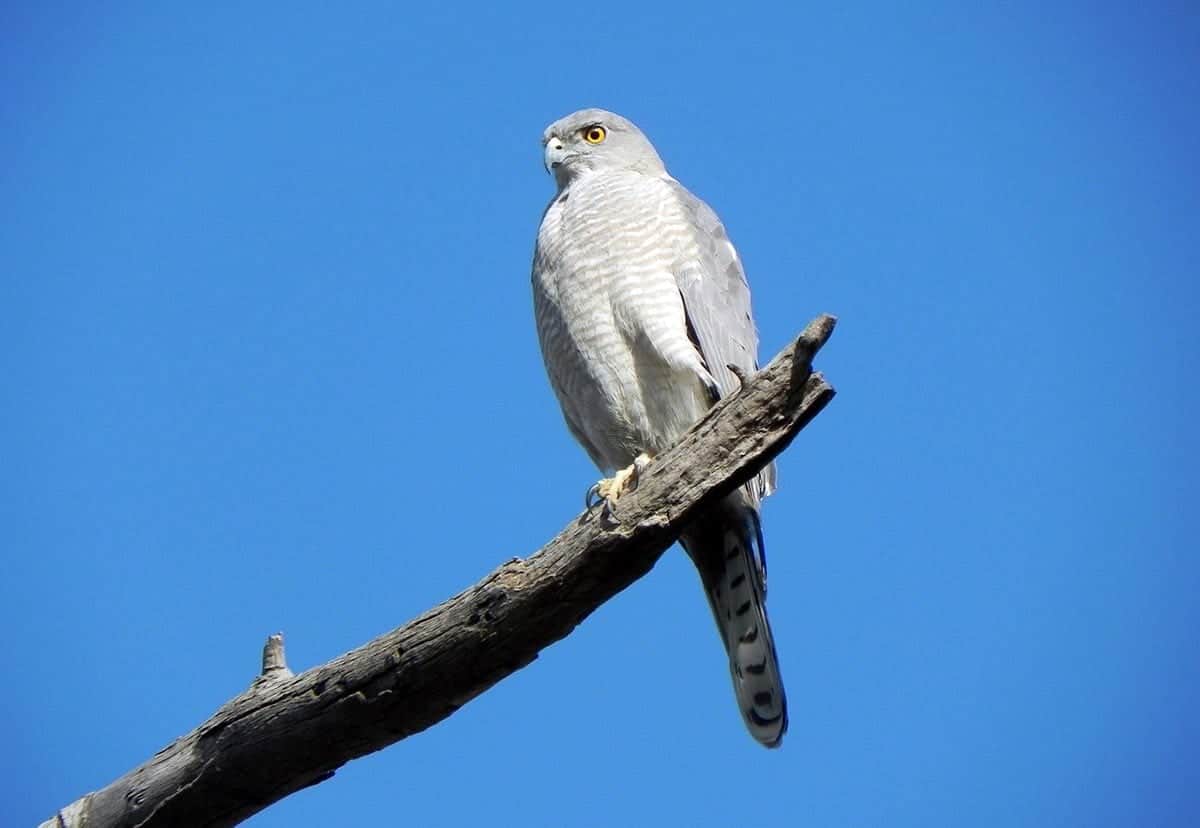 From the magnificent golden eagle to the less known elf owl, birds of prey come in all sizes. It is also good to note that these birds don’t necessarily have to feed on sizable mammals or reptiles to qualify as raptors. As a matter of fact, the majority of the small birds of prey covered in this post feed on insects. Moreover, because people focus on the larger raptors like hawks and eagles, the majority of the birds covered here are less known. All the same, these small birds exhibit interesting behaviors and are worth searching for when bird watching.

The elf owl is the world’s smallest and lightest owl. It is a small grayish-brown bird about the size of a sparrow. You will have better luck spotting it in the Southwestern United States, the Baja California peninsula, and central Mexico. The elf owl mostly inhabits the holes of woodpeckers but can also be found nesting in natural tree cavities. It is nocturnal and mostly feeds on insects.

This is yet another small owl native to North America. The Northern Saw-Whet Owl is considered the smallest owl species in North America. You will have better luck finding it in dense thickets or conifers. They mostly nest at eye level although it is not uncommon to find them 20 feet up. While they are raptors too, they are preyed upon by larger owls and other raptors. They are nocturnal and feed mostly on small mammals. Read more about the owl meaning here.

Black-thighed falconets are similar in size to the sparrow, making them a very small bird of prey. The bird is native to Brunei Darussalam, Thailand, Myanmar, Singapore, Indonesia, and Malaysia. It roams in Sri Lanka. The black-thighed falconet is mostly found around human cultivation, villages as well as near active slash-and-burn forest clearances. The bird lives at an elevation of below 4900 feet mostly by streams, rivers, and paddy fields. They feed mostly on insects and small birds and lizards.

The Shikra is a small raptor that is widely distributed in Africa and Asia where it is referred to as the little banded goshawk. This bird is very similar in appearance to the sparrowhawk species. They have a sharp two-note call and have a flap and glide flight pattern. Due to the ease of training, the Shikra used to be a favorite among falconers in Pakistan and India. They feed mostly on rodents and insects.

Size: 13 inches long with a wingspan of 25 inches

Also known as the northern sparrowhawk, the Eurasian sparrowhawk is a small bird of prey with a bluish-grey upperpart and orange-barred underparts. The bird can be found in any habitat in the temperate and subtropical parts of the Old World. They mostly hunt smaller birds including garden birds, finches, tits, and starlings. They breed in any suitable woodland and build their nests in trees using twigs.

The roadside hawk is a small raptor found mostly in the Americas. With the exception of dense rainforests, this bird is well adapted to a wide range of ecosystems. It is considered an urban bird thanks to being the most common species of hawk seen in cities. It is very aggressive when nesting and has been recorded attacking humans that pass near their nest. Roadside hawks feed mostly on squamates, insects and small mammals.

Also known as the African Pygmy Falcon, the pygmy falcon is the smallest raptor in Africa native to eastern and southern Africa. The adults are white below and on the face and grey on the upper part. Females have a chestnut back. Pygmy falcons have a low and undulating flight and feed mostly on insects, small mammals, and small reptiles. In Kenya, they are found in white-headed buffalo weaver nests whereas in South Africa they are found in red-billed buffalo weaver nests.

The American kestrel is also known as the sparrow hawk. It is the smallest and most common falcon in North America. It hunts in an energy-conserving fashion where it perches or hovers in the air, scans for prey, and ambushes. The American kestrel feeds mostly on grasshoppers, lizards, small birds, and mice. It nests in cavities in cliffs, trees, and buildings. It is used in falconry mostly by beginners.

Size: 13 inches long with a wingspan of 29 inches

Merlin is a small species of falcon from the Northern Hemisphere. Thanks to their small size, they are swift fliers and very skilled hunters. They prey upon small birds in the size range of quail to sparrows. They have for years been regarded as falconry birds. The population of merlin has increased in North America recently and some of these birds have adapted well to the city life to the extent that they never migrate.

From California to the horn of Africa to the far east, there is no shortage of birds of prey. To get the best experience in bird watching, you must study each bird’s habit first. This will help you know where to look. You should also bring a pair of binoculars or a camera with an amazing optical zoom.