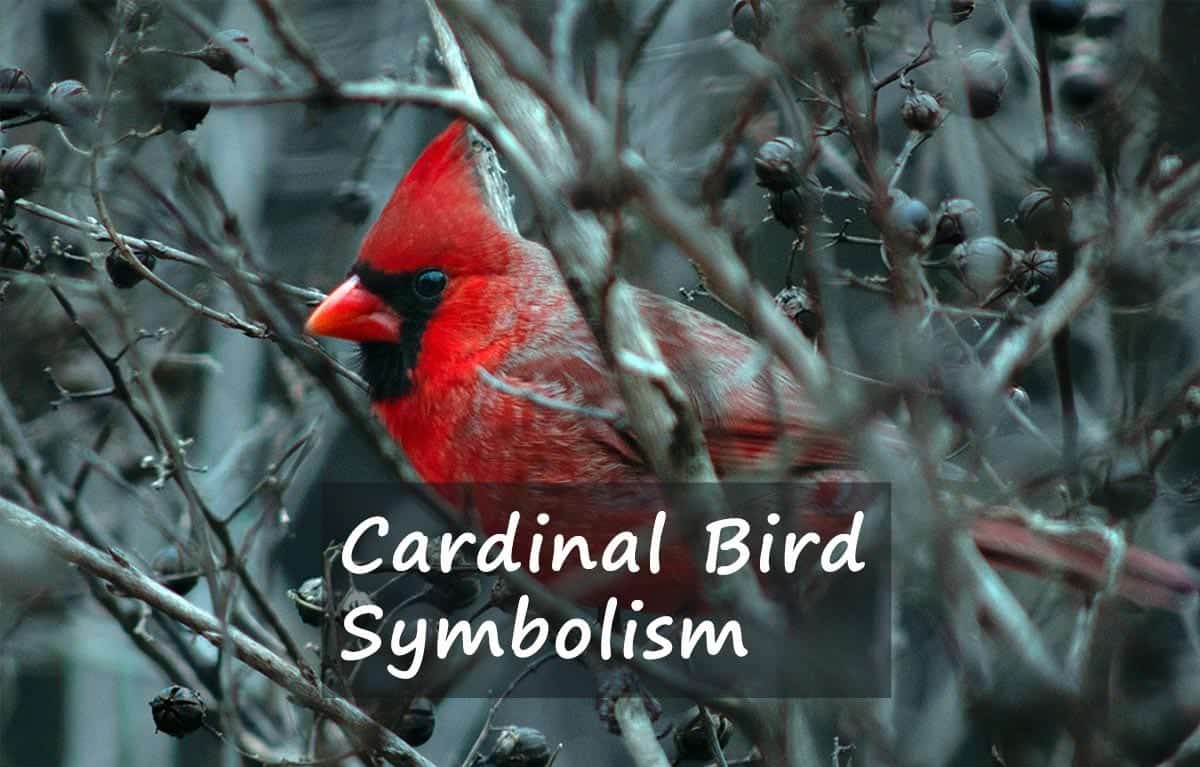 A Cardinal bird can represent intuition as in a little bird told me. A bird also represents spirit. A bird can be spirit and nature together. Spirit is masculine energy, natural feminine energy. A bird being spirit can also represent thoughts, ideas, plans going on within.

Whether you’ve lost a loved one or your confidence, the cardinal bird is a power animal and totem that possesses the spirit to reconnect you to them or restore your confidence. It helps you become your truest and most confident self. Cardinal symbolism involves cardinal birds interfering in our lives by sending to us meaningful messages in a variety of ways.

Whether is a red cardinal, female, dead, single or couple cardinals singing, a cardinal bird in your yard or even in your dream, they all remind you to be clear in your intentions.

Cardinal symbolism, lets you know that putting yourself first is key to helping yourself and others as well as signifying the perfect timing to start that project or execute your plans.

Cardinals have been surrounded by spirituality for centuries. High ranking Catholic figures are called cardinals and wear deep red robes. Native American cultures believe that cardinals are the daughter of the sun and if you see a cardinal flying towards the sun you will have good luck.

Let’s look deeply into cardinal symbolism and meaning to understand the significance of this Animal Spirit Guide and how it supports, builds, and inspires you!

As an essential part of our human experience, the red cardinal is a spiritual animal that connects Earth and Spirit as well as Past, Present and Future. It brings the wisdom of the universe close to us in the most beautiful and natural way possible. We just need to pay attention to.

The red cardinal is wrapped in just every tradition and myth and many of its symbolism and messages are meant for good health, goodness, fruitful relationships, self-realization and renewal, happiness, healthy relationships and many more. Looking closely at the life of these magical birds and what they have to offer can reveal the reason behind the many good things they are believed to offer. For instance, did you know that unlike many birds, the red cardinal isn’t polygamous but monogamous? This truly until-death-do-us-part couple lives and sings together all through life in a small area they protect so fiercely.

When people come across a red cardinal bird, their attention usually shifts to its stunning red feathers and unique crest, brightening their day. With the spiritually sensitive, seeing a red cardinal is seeing a spiritual messenger that comes with a good message from the spirit world. Its appearance is also a way through which spirits attract your attention. When did you last spot a cardinal and did you remember asking for spiritual guidance?

Because the cardinal has such a strong reputation for being a loving, faithful partner and an attentive, caring parent, much can be gleaned from sighting one of these beautiful, sweet songbirds. Whether you receive a visitor that serenades you outside your window, flies across your path, or even visits you in a dream, you can rest assured that the Universe is telling you something you need to know about the nature of your life.

Cardinals are sincere and truthful in their relationships, and having cardinals come into your life can indicate many possibilities related to their nature. They can be a sign that you are on the right track, that your efforts of being honest, kind, and loving are being recognized by the Universe and will be rewarded. Cardinal bird symbolism is a strong encouragement to keep up the good work!
Other times, their presence may be a warning, letting you know that someone you’re involved with isn’t being as truthful and sincere as they should be and that you may need to reevaluate any relationships you have.

Sometimes, though, the person that a cardinal is warning you about may just be yourself. This is an indication that you might need to examine your own thoughts and actions to see where you might have fallen off the path that has been laid out for you.

When A Cardinal Crosses Your Path

Sometimes, a cardinal simply crosses your way and that all you see. Does flying across your path communicate a message as well? When you experience that, know that the cardinal is assuring you that your mission to wherever you’re heading is clearer and sincere. That you just need to reaffirm it and have a clearer goal and it’ll be easily achieved. It might also be communicating the importance of taking the consequences of your intention and decision more deeply and diligently. If your situation doesn’t match with all of these, take the message as a call to take really good care of yourself.

In addition, the cardinal is symbolic of the living blood of Christ.

Both cardinals and blood have long been symbols of vitality, and in the Christian context, that vitality is everlasting. “By His blood, we are freed from sin to serve the living God, to glorify Him, and to enjoy Him forever.” Traditionally, the cardinal is symbolic of life, hope and restoration.

These symbols connect cardinal birds to a living faith, and so they come to remind us, that though circumstances might look bleak, dark and despairing, there is always “hope”.

There are several thousands of common beliefs when it comes to birds, and the most common among them is Red cardinal. Red cardinals are generally believed to be spiritual messengers connecting earth and heaven. (read more about the red cardinal biblical meaning here or the biblical meaning of seeing a Blue Jay here).

The word cardinal is derived from the Latin word “cardo”, which means hinge. Much like a door hinge, the cardinal is represented as an entryway between earth and spirit. They carry the message to and fro. Holy Spirit is described as red cardinal as He renders two elements, white light and red flames. White light depicts the purity and peace in the light of the spirit, and red flames represent fire elements. Also, red cardinals are symbolized as the living blood of Jesus Christ. In the Christian context, both Blood of Jesus and Cardinals are used as the symbols of vitality, and that vitality is everlasting. Scripture clearly says “By His blood, we are freed from sin to serve the living God, to glorify Him, and to enjoy Him forever.” Red cardinal represents life, hope, life and restoration.

The female cardinal appears brownish and seeing it symbolizes that you’re getting spiritual support and the opportunity to explore and heal certain uncomfortable emotions in your life that you seem to have forgotten. It might be a means of getting in a state of reconciliation with a love one. The experience also encourages you to get back to living a happier and cheerful life with your family and friends.

The cardinal bird symbolism is so spiritually powerful that the sighting of it dead or alive has symbolism. Sighting a dead cardinal paradoxically symbolizes a fresh beginning from an end as opposed to simply an end. So, when a cardinal dies and you find the carcass, it has to make you reflect on the changes taking place around and inside you. It simply gets you to acknowledge your emotions, work on releasing that old skin to get your life more rejuvenated. Pain can only come if you resist the spiritual call to discard your old baggage.

Sometimes birds just die accidentally though, its just that, We had birds hitting our picture window and storm doors all the time. Right after we would clean them. I don’t know if the refection blinds them for a minute, or they think A rival bird is in their territory. Which ever, way I hate to see one of God’s creatures die. We, always buried them in the flower garden, One spring the most beautiful yellow bird hit our storm door, poor thing broke it’s neck. I had only seen canaries that shade of yellow, Maybe he was one who got free, even worse. A person lost their pet. We got a shoe box wrapped him up and buried him in the front garden. Nothing Bad happened to us after that. You may be confused, If a bird gets inside your house from outside, there will be some trouble in the family.

Seeing A Red Cardinal After A Death

If your loved one wants to inform you of their presence of something you should know, they might send animal kingdom messengers to you. Their common messenger choices usually include small, shiny-colored bugs, butterflies and birds especially cardinals. Creatures with wings attract our attention pretty much and all you need to do is, tune in and follow their lead and messaging to figure out their mission and their sender. Sometimes, they might just come to let you know that your beloved friend or family is around and thinking about you. Are you requesting the universe for guidance? That cardinal you see acknowledges that Spirit hears and guides you.

Though places, where the bible was written, had no cardinals, today’s Christian era has a connection with cardinals. As the name suggests, the cardinal is a prominent Christian title bestowed on highly influential Catholic Church leaders, making them eminent messengers of God over people in their churches and nations. Besides, Christianity calls four of the seven Christian Archangels as Cardinal Angels. These are Angels Michael, Gabriel, Uriel and Raphael.

Many people believe when a cardinal lands in your yard, an angel is near. Cardinals can remind you of a departed loved one and are known as the most notable spiritual messenger.

When the Roman Catholic Church makes its leaders cardinals, they become senior church officials who command a significantly high amount of authority. Cardinals don’t only lead dioceses alongside handling other very important duties, they are so spiritual and connected to God that they also advise the pope. It’s from them, that the next pope comes. If you sight a cardinal bird, it may be an indication that the timing is right for you to speak to an authority figure on a concern you hold dearly and it could even be a major project.

There are many unique interpretations of a bird tattoo meaning because it can represent lots of things. However, the tattoos reflect the cardinal bird symbolism. It mostly depends on who the tattoo is, its style, and placement. However, when it’s the highly significant red cardinal, the meaning gets wrapped in positivity like love, hope, passion, family, nobility, renewal, and grace. Vitality and Energy; these are two words that come to mind when the song of the Cardinal echoes from your backyard. There is nothing demure or coy about these birds; they make their presence shine through even the chill of a winter’s day.

Most cardinal tattoos appear natural, however, you can also find a few variations out there that come in abstract and watercolor styles.

A cardinal bird tattoo with a realism route is interpreted as displaying your family pride and territory.

Make sure you give your idea for a cardinal tattoo a thoughtful moment about the cardinal symbolism you want it to display and the position it fits well.

The Cardinal Symbolism is deeply respected in history and cultures as it has played remarkable guiding roles in people’s lives, connecting Earth and Spirit. In many unique and mysterious ways, the bird continues to influence human civilizations with wisdom from the spirit world. As many say, it’s a meeting point between our human world and the world beyond. If you sight any, pay enough attention and decipher the message it brings to you.

Here are some more interesting facts about the red cardinal bird, what cute birds they are: