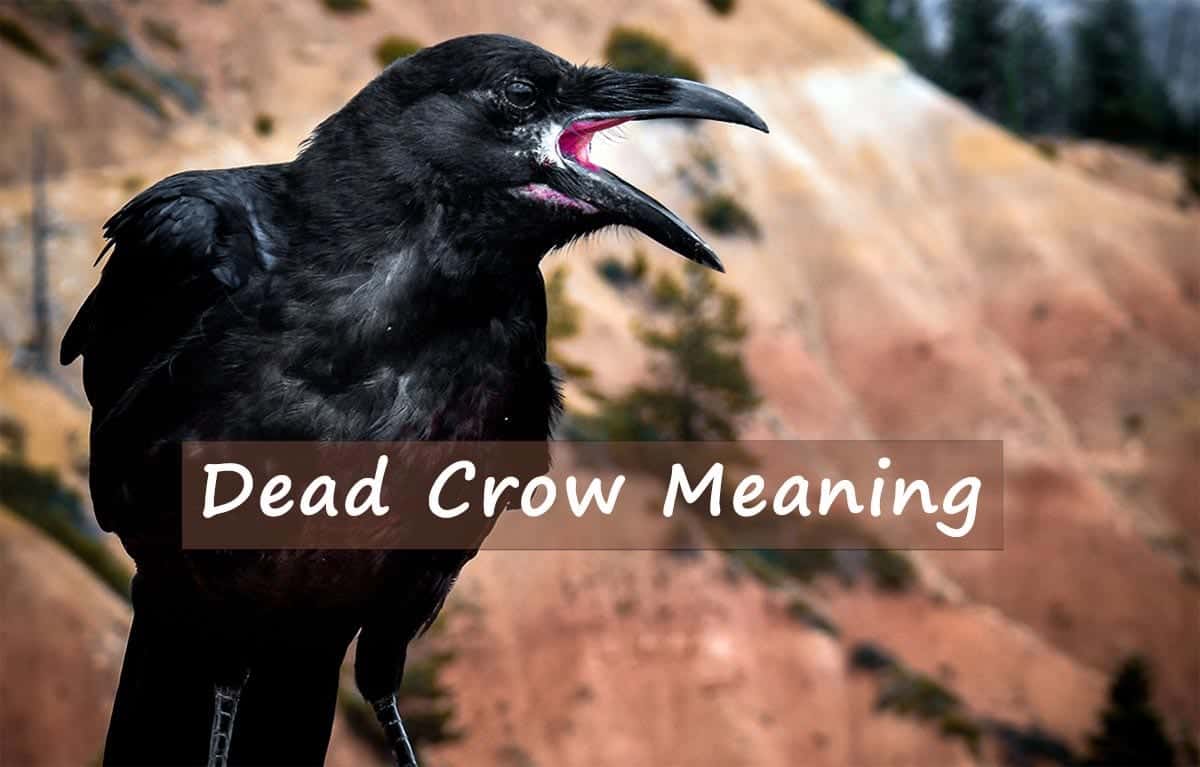 Crows are commonly associated with death and misfortune – a black colored bird that portends doom. However, this is the crow symbolism when alive. The dead crow meaning is thought to suggest the opposite, potentially bringing good news and positive change to those who see it. Though different people and belief systems hold many varying ideas, it is the crow’s connection to transformation and change – of a good or bad kind – which seems to remain a common theme.

Birds are simply geniuses and bird symbolism is a vast topic but it seems to be agreed that the meaning behind seeing a dead bird depends on what type of bird it is. We’ve already mentioned the fact that a crow’s death might suggest positive outcomes for those who see them, yet there is also a belief that dead blackbirds, including crows, point to an unresolved tension deep inside someone. This is because the color black represents that which we cannot see.

A white bird depicting purity, peace, and goodness – such as a dove – is tragic and ominous in death. They might forbode the loss of something special, or an approaching conflict, depending on the happenings in an individual’s life. If the bird has positive associations when alive, it makes sense that its death would have a negative meaning.

Since songbirds represent communication, their death should encourage us to ask ourselves if we’re hiding something: perhaps we’re not speaking up, or we’ve lost touch with someone in our lives.

Another factor that changes the meaning of seeing a dead bird is the location. If a dead bird falls on your doorstep or in your garden, you must expect that change is coming soon, whether you want it or not. It’s best to change your habits and not resist this change. If it hits your window, this means you are confronting an obstacle that must be overcome or removed. Lastly, if it comes inside your house, you need to look inwardly since the change going on is inside yourself. The consistent theme is one of transformation and change, whether that’s in a positive or negative way. The important thing is to not resist the change that is happening but find a way to adapt.

Dead crow meaning: they are considered to be the messenger between the world of the dead and the living, their presence acting as a warning. They’re also thought of as a guider of souls to the afterlife. This existence between the two worlds gives them superior knowledge, explaining the respect we have for these particular birds.

Read here about the Crow Mythology.

A bird’s ability to fly puts them closer to the heavens and elevates them above the human world, giving them a special role in religion. Some types of birds came to represent parts of the Christian soul and the Saints themselves. The white dove was particularly significant, representing the Holy Spirit and indicating a blessing from God. On the other hand, dead birds were considered to show failure – a warning to prepare someone for the challenges ahead. They might also be a sign of a loved one passing away.

Dreams about birds are usually considered to be good signs, therefore, dreaming of a dead bird should prepare you for the bad news. However, due to the crow’s ambiguous and mystical nature, dreaming of a dead crow is thought to be more hopeful than a live one. A flying crow might indicate future hardship or bad news, such as the death of a loved one; it could also foresee a great change in your life – one not to be resisted but accepted. However, dreaming of a dead crow says that bad days are gone and better days are on the way. It suggests that you are out of some previous danger and are feeling great relief.

Symbolic Meaning of the Raven in Native American Indian Culture

The raven symbolizes a change in Native American Indian lore, just as crows do in many other cultures. For some tribes, these transforming qualities are something to be celebrated, but for others, they make the raven a deceitful and tricky creature. Like the crow, the raven is an extremely magical bird – a bringer of messages from beyond our world. Furthermore, the native American Indians used this magic in healing rituals, showing that the raven’s transforming qualities were thought to give life as well as bring death. Its intelligence and ability to see the truth make it a highly respected animal, used to show humans the truth where we cannot see our own secrets. As we’ve seen, the dead crow holds many meanings and symbols, acting as an omen of death, but also a messenger of positive change. The key features of the bird for symbolic purposes are its intelligence and transformative powers, able to move between the world of the living and the dead. Since its meanings are so ambiguous when alive, they are similarly mystical in death, calling for self-reflection and an ability to change with the world.

Crows are highly intelligent creatures, some experiments have revealed that American crows never forget a (human) face—even for nine-and-a-half years and counting. Also, they’re calling to each other, gathering around, and paying special attention to a fallen comrade is common among the highly intelligent corvids, a group of birds that includes crows, jays, magpies, and ravens. Check out the video below.