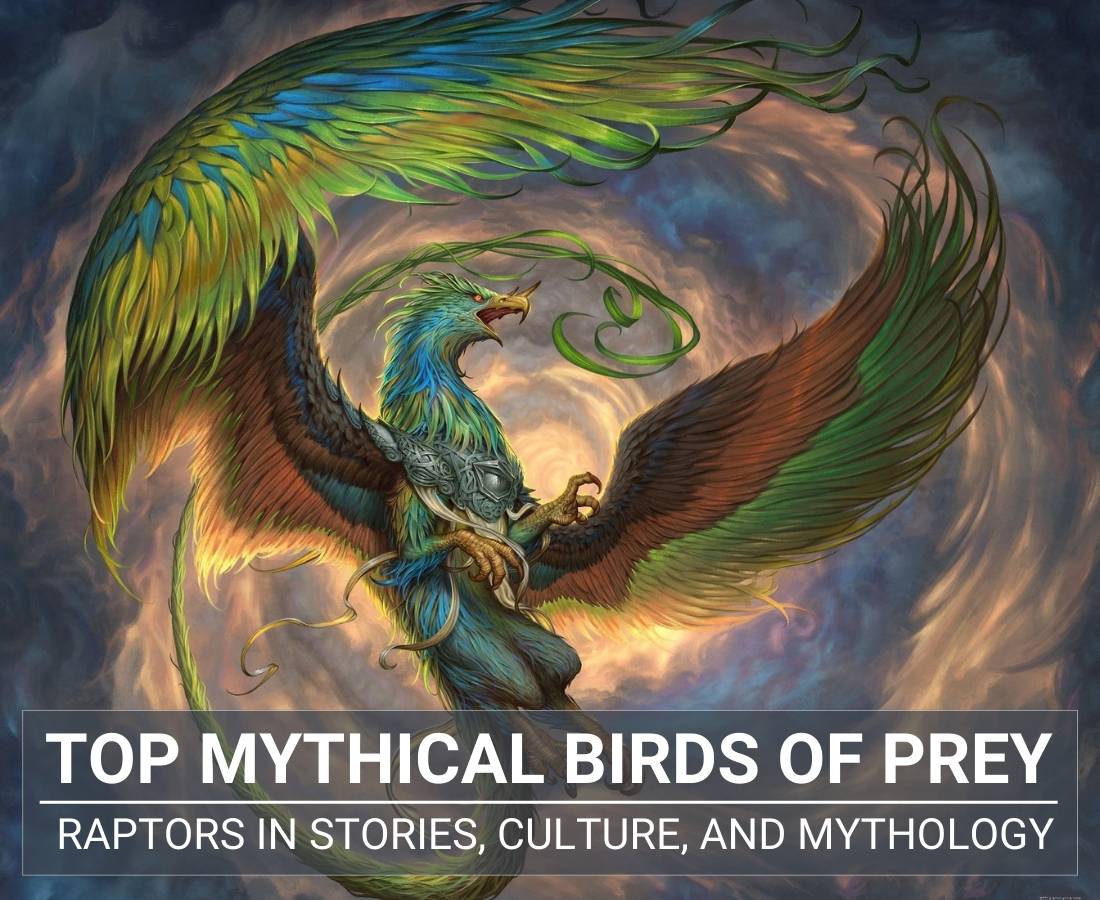 Birds of prey are predatory birds that feed on other animals. In certain stories, cultures, and mythology, there are depictions of mythical birds of prey that carry many of the same characteristics as common birds, such as the hawk, vulture, and their own.

Due to their mythical nature, they are much more abstract and fantastical than birds of the real world.

Do you know what a harpy is? Mythical birds of prey come in all shapes and sizes, but they all have one thing in common: they’re deadly predators. In this blog post, we’ll take a look at some of the most famous mythical birds of prey and explore their origins and symbolism. Whether it’s the harpy from Greek mythology or the Thunderbird from Native American legend, these creatures are sure to fascinate you!

There are many origin stories for griffins, with some cultures believing that they are the offspring of eagles and lions, while others believe they are simply celestial beings. Regardless of their origin, griffins have long been associated with strength and power.

In ancient Greece, for example, griffin statues were often placed outside of temples as a way to ward off evil spirits.

A hippogriff is a mythical bird of prey with the head, beak, talons, and wings of a giant eagle and the body, hind legs, and tail of a horse. It was said to be the offspring of a mare and a Griffon. The Hippogriff was considered a very powerful creature and was often used as a symbol for the god Apollo.

Check out this video for more information on the Hippogriff!

Harpies are mythical creatures that are part woman and part bird. They have a woman’s head and torso and a vulture’s wings and talons. In Greek mythology, they are the daughters of Typhon and Echidna.

Harpies are known for their terrible screams, which can paralyze their victims with fear. They also have a habit of stealing food from others. In some stories, they are also said to be able to transform themselves into other animals.

Harpies are usually depicted as evil creatures, but there are some stories in which they help heroes on their quests

The Turul is a mythical bird of prey from Hungarian mythology. The Turul is described as a large, powerful bird with glowing eyes.

It is said to have red eyes and black feathers and is often associated with fire. The Turul is also a symbol of strength and power and is often seen as a protective spirit.

Rocs are said to be huge, with a wingspan reaching up to 100 feet. They are also said to be very powerful and able to carry off elephants and other large animals.

Some stories say that rocs are friendly birds, while others say they are fierce and dangerous. Rocs usually live in mountains or cliffs, and their nests are very difficult to reach.

It is also said to have a large wingspan to block out the sun. The Roc is native to the Arabian Peninsula and is said to live in the mountains.

This bird is considered to be a very powerful creature and is said to be able to crush a human with one hand. It is also said to be immune to all weapons. The Roc is feared by many people and is often used in stories as a symbol of terror.

The Thunderbird is a mythical bird of prey that is said to inhabit the mountains and forests of North America. This powerful creature is said to have the ability to create thunder and lightning and is often associated with storms.

The bird is often described as very large, with a wingspan reaching up to 12 feet. The Thunderbird is also said to have a very loud and powerful cry, which sounds like thunder.

The bird is typically associated with storms and bad weather and can control the weather by flapping its wings. The Thunderbird is also said to be able to transform into a human form and is often depicted as a powerful warrior.

Poukai(s) are large, mythical birds of prey that are said to inhabit the mountains of New Zealand. The Poukai is usually large and black, with sharp talons and beaks. They may also have wings made of fire or feathers that can cut through flesh.

They are very aggressive, and their cries sound like human screams. Poukai is also said to be able to kill with just a glance.

Some believe these creatures may be based on real birds, such as the harpy eagle or the Andean condor.

Whether or not they exist, poukai are integral to Maori mythology and culture. They represent strength and power and are often seen as omens of death. For many, the poukai is a feared and respected creature.