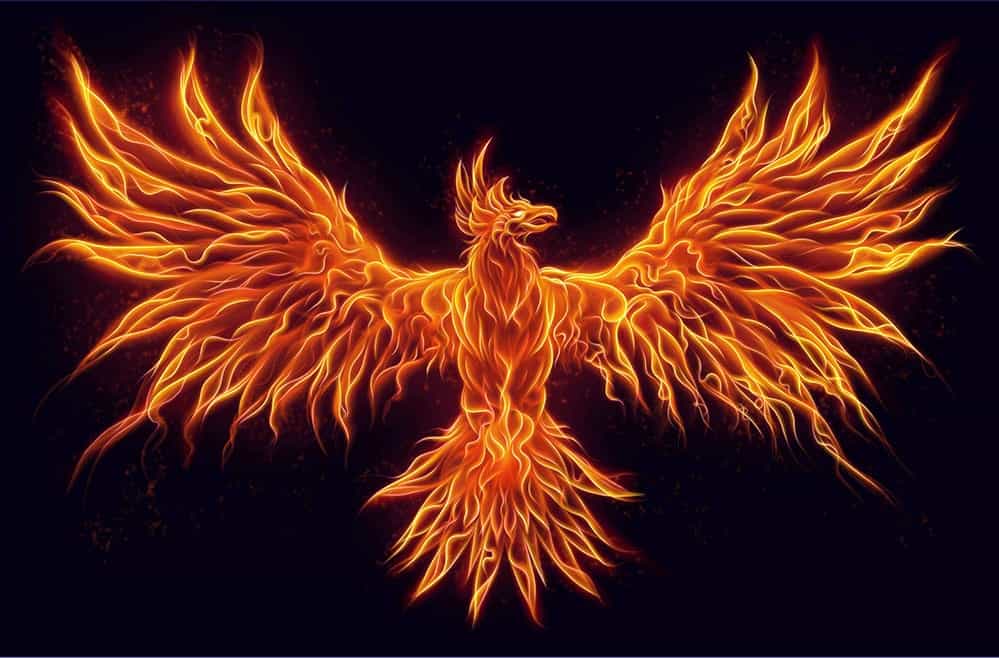 The Phoenix – Deconstruction, Rebirth and Renewal

The Phoenix is always consistent as an awesome being which is large in structure and wingspan. And undergoes differentiated versions of destruction, rebirth, and renewal. But the consistent parallelism is that the Phoenix is always the symbol of undying perseverance, inspite of the expected opposition and blockade towards its goals. It goes on, gallant and confident. Unwavering in its struggle towards the accomplishment of its mission.

It experiences a temporary setback, wherein, because of old age, around 500 to 1000 years old, it has to go back to the City of the Sun, Heliopolis, to retire to its funeral pyre of a nest of herbs. Where, with a clap of its wings, the nest catches fire and is burned to its death.

But because of immortality, it emerges from the ashes, a new bird, better than its old self. The new reincarnated self is better equipped to pursue its mission again. And this cycle of renewal, rebirth, and destruction goes on and on.

The mythical Phoenix spirit totem is the keeper of the fire in all creation. The fire represents transformation, death, and rebirth. The Phoenix is the ultimate symbol of strength and renewal due to its being a powerful spiritual totem.

The Phoenix spirit totem inspires a confused and lost person with the following traits so that he can DIE in his old desperate self, be REBORN into a new, upgraded, and improved self and be TRANSFORMED into a confident and future looking human being willing to take up all the challenges.

The Phoenix spirit totem encompasses varying versions in different cultures. From the pyramids of Egypt, to the deserts of the Middle East. Down to the annals of the Jewish faith and into the quiet cultures of the Orient in China and Japan.

The Phoenix is transformed into different variants in these diversified societies.

The Phoenix is a legendary bird mentioned broadly in both Greek mythology and in the Talmud of the Judaism faith. In the ancient Greek language, it is referred to as pho&icirc;nix. In Latin, the term is fenix for this ornithological figurehead.

The Phoenix is a bird with long life. It regenerates or achieves rebirth by going through a cycle. Its resurrection or new life is obtained by rising from.the ashes of its predecessor or ancestor.

The Phoenix spirit totem has an Oriental counterpart called the Fenghuang in Chinese or the Hou-ou in Japanese. They are also birds mired in mythological folklore, and in East Asia, they are respected to be the superior bird over all other birds.

This Oriental Phoenix is divided into the male called feng and the female called huang but the distinction between genders had been blurred through time which resulted in the final belief that they are female so they can be paired with the Chinese Dragon which is strongly male.

Phoenicia does not exist today but it was a civilization which thrived in present day parts of Syria, Lebanon, and Israel. The words Phoenicia and Phoenix appear to have the same root so Phoenix may mean the Phoenician bird or the purplish-red bird.

It is hinged on the Sun. Ancient folklore depicts the beauty of a magical bird, stunning and glistening, with a very long life span of hundreds of years (to the envy of humans and even turtles). It self destructs in a nest which it builds itself. Then from the ashes it emerges, to start another long, colorful life.

It is a grand bird, massive in structure, comparable to an eagle or a peacock. It is imbued with reds, purples, and yellows on its feathers, inasmuch as it is strongly associated with the flaring sun and burning fire. Usually, a nimbus will surround it, and a halo will be on top of it, and is illuminated in the sky. A person should flinch and protect his eyes from the sun in order to catch a glimpse of the bird. Its eyes are colored blue and glistening like sapphires. It constructs its own funeral pyre or nest (usually with cinnamon twigs and other spices). The nest catches fire with a single clap of its majestic wings. In death, it rises with honor from the ashes and fly away.

What does the Phoenix symbolize?

As a powerful spiritual totem, it is the ultimate symbol of strength and renewal.

It is both a fire and sun symbol, wherein its whole life span is represented by a single day. It dies when it sets each night and is reborn when rising the next morning.

Other symbolisms and entities attributed to the Phoenix are its connection to time, the Roman Empire, Christ, Mary, and virginity.

According to Native American legends, Phoenix is a bird that does not reproduce, it was here before any of us and it will be here forever. There was only the one Phoenix, that originated from the beginning of Earth. Legend says that Sun shined upon its wonderful and bright feathers and decided that bird has to live forever. Then the Phoenix became the victim of its own beauty, as it was constantly chased for its feathers. Not able to live like that, he flew far away into the desert. After hundreds of years he became tired and old and decided to come back. He sang to the Sun but no answer was given. He wanted to be young and strong again.

The Phoenix is considered immortal, because even though it dies, it always reincarnates, again and again from its ashes.

The Powers of the Phoenix

Of all supernatural creatures, the Phoenix is one of the strongest.

Why the Phoenix Concept never dies

There are famous people throughout the centuries who have never tired of retelling the Phoenix myth or have even used the Phoenix motif or symbol. They are Herodotus, Lucan Pliny the Elder, Pope Clement I, Lactantius, Ovid, and Isidore of Seville. At present, there are Phoenix hobbyists. People who purchase any item or replica even loosely connected to the bird. Just for their collection to stare at every day. Or even Phoenix scholars who still study every stitch of evidence which will eventually prove that the Phoenix is still living today.

Naming a city as Phoenix simply means this idea will never die. Today, Phoenix in the state of Arizona, USA, is one of the largest metropolitan areas in continental North America. It has earned the nickname Valley of the Sun because it is so hot most times of the year. It was named Phoenix by Philip Darrell Duppa (owned the oldest house in Phoenix) in 1870. He describes it as a city reborn from ruins of a former civilization. A perfect parallel to the bird myth.

The Phoenix was made a study in comparison to undying Rome, to propagate the idea that the Roman Empire was indestructible. The Phoenix appeared on the coinage of the ancient Roman Empire. It was a symbol of the Eternal City.

In an emergent Christianity evangelization, the ideas about the Phoenix were appealing to the proponents. The Phoenix was considered to be an allegory of resurrection and life after death – which are central principles of Christianity.

In myths of the Islamic faith, the Phoenix is compared the anq or the morgh, a large and mysterious bird (perhaps it was a heron) that was created by God with all the perfections but converted into a plague and perished.

The Phoenix is reflected by the Celts through the Garuda or Sunbird. It was said to be the only creature to be allowed to fly into Paradise. With a life span of 500 to a thousand years, only one Phoenix is alive at any point in time, and at the moment of death of the parent, a beautiful new bird was born through Star Fire and Sacred Flame. Of all birds, it has the sweetest song and its tears have miraculous healing properties. With every reincarnation, in Celtic myth, the Phoenix is reborn at a higher level.

Meaning Of The Phoenix Tattoo

This fiery bird design on skin is one of the more popular tattoo designs today. The essence is that if one were to wear a tattoo, it should not send a message that is just temporary or trending at present. Since it will be imprinted on the skin, it should send a permanent message.

The Phoenix tattoo conveys that permanent message. It is a strong symbol of renewal, rebirth, and reincarnation. It also represents grace and virtue. It is the victory of life after death, portraying immortality.

Although the Phoenix is usually depicted as a colorful bird, there is no general consensus on this. Some say that it looks like a peacock, others describe it with red legs and some say that it has golden scales. Talk to your tattoo artist about your individual interpretation and they will be able to help you to find the right colors to suit your design and your skin tone.

Both men and women wear the Phoenix tattoo proudly on their skins today.

The Phoenix Meaning In Your Dreams

A Phoenix dream is a good sign. Since it represents rebirth to a higher level, expect good times ahead.

If you see a Phoenix changing shapes in your dream, expect some positive transformation in your life. soon, you might have a promotion in your job. In your health, your doctor will soon pronounce to you that your cancer has not been spreading, In starting a family, that a pregnancy will bring joy to your loved ones.

If a Phoenix is in flight in your dreams, it means you have been doing well in communicating your message, but you should research and reach out more so that there will be action done.

The appearance of a Phoenix in your dream may mean also that your past continues to bother you. It is telling you to confront the past, settle whatever insecurity you have with it, and then face life with renewed vigor.

The Phoenix In Alchemy

There are five birds in the alchemist’s book. The Phoenix is one of them. It is described as fiery, regal, and unafraid. In alchemistry, the bird is the symbol of the Philosopher’s Stone which is the completion of the Great Work.

In the laboratory, the Phoenix is the red sulfur, which completes the Great Work at the fourth stage called Rubredo (or redness). This process cleanses and transforms the sulfur into fire.

Paracelsus, the famous 16th century alchemist, coined the term Alchemical Phoenix. This refers to the union of salt, mercury, and sulfur – known as the tria prima or the three principles in alchemy.

The Phoenix As A Positive Message In Life

If you need some reinforcement when you lack self confidence or lack the will power to pursue something worthy to the end, try putting in your pocket a lucky charm or a picture of the Phoenix.

The Phoenix will impact you that it is time to renew your mind, body, and spirit. To shed off your negative old life and confront head on new challenges. Do not be afraid because you will emerge stronger and more attractive from the ashes of your old self. This empowers you to upgrade to new heights. The Phoenix reminds you that anything beautiful could be hidden, but is just waiting to be unearthed by you. And you have time on your side.

Take another look at the Phoenix in the picture. Put it back in your pocket and proceed with your beautiful life.