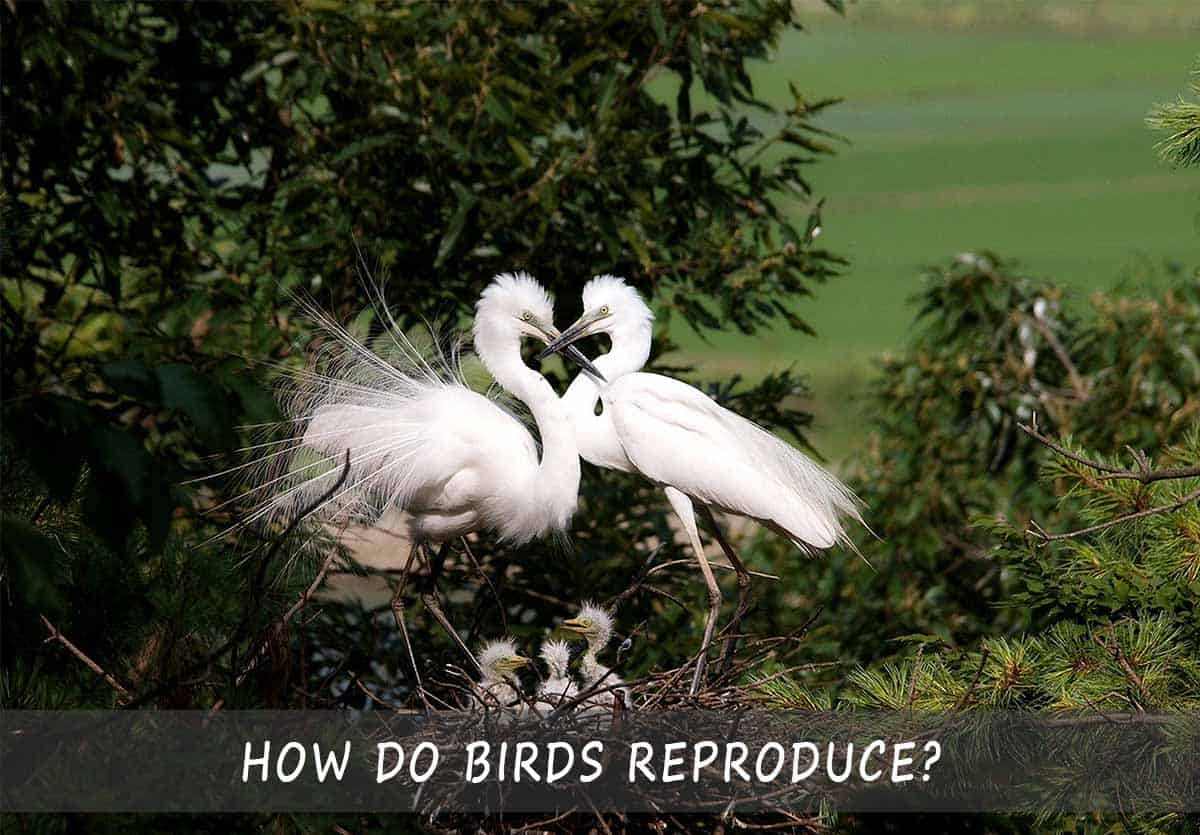 Birds are a diverse group of animals that have evolved over millions of years. They range in size from the tiny bee hummingbird to the huge ostrich.

Much like in humans, it all begins with one hello. Breeding is an integral part of a species’ survival which is why birds, in all their colorful sweet-singing and high-flying glory, participate in unique courtship and mating displays. Bald eagles are known to perform amazing aerial acrobatics during courtship while peacocks show off a train of fabulous feathers to impress a potential partner. Amidst the grand and distinct nature of these marvelous winged creatures (and yes, birds are animals), we really just can’t help but wonder: how do birds reproduce?

Perhaps it has something to do with the fine weather or flowerbeds naturally aplenty, but the mating season for birds happens in spring. Scientists observed that mating is typically initiated by the males, launching extravagant feather displays and performing garish dances to break the ice. The female decides which bird tickles their fancy by flaunting their brightly colored feathers, as a symbol of a partnership that only ends when one mate dies.

Spring, when food is abundant, possibly for energy, and the vegetation lush, probably for additional privacy, is the mating season of choice for these fascinating creatures. Although the sex act is brief, coming together to conjugate is vital in fertilizing eggs to raise young chicks, prompting pairs to engage in sexual copulation several times, adding spice to the notion that at spring break, the party never really stops.

This may all sound familiar, but wooing a potential mate with acts such as breath-taking flights, alluring songs, and dances, and an elaborate display of gorgeous plumage are all part of a bird’s courtship behavior. Often lasting longer than the physical sexual union, this period is when a male bird boasts of his strength and health towards a female, convincing her that he is the best possible mate in creating strong and healthy chicks.

Here are a few possible reasons why male birds do what they do whenever they woo:

Such courtship displays are essential for female birds as it enables them to assess their prospective partner. Since they invest a considerable amount of energy to produce and incubate eggs followed by protecting and raising their young, the demonstration of superiority by the males gives her the opportunity to choose whose game is best.

It is only when a female bird finally becomes friendly will the actual mating ensue. Unlike mammals, birds do not possess sexual organs. Instead, both the male and female have an opening called the cloaca that serves as an entrance for the male’s semen and an exit for their urinary and digestive waste, as well as their reproductive system. The cloaca is an internal chamber where a bird’s testes or ovary release their sperms or eggs.

When birds are of breeding age, their ovaries and testes produce sperms and ova, where males store it in their cloaca until they find a mate. In spring during mating season the reproductive opening of both male and female birds slightly protrude outside their body. A few worms and drinks later, the birds would rub their swollen cloaca together, allowing the male to discharge his sperm in the female’s opening where it travels up her chamber and fertilizes her eggs.

Short of a bird Kama Sutra, the most common position that birds assume when mating is for the male to carefully mount and balance on top of the female. With both birds facing the same direction, the female bows down and hunches or lowers itself to the ground. She will then expose her cloaca by moving her tail aside, allowing her mate to easily gain access to it. The male will try to reach her cloaca by arching or curling his body, rubbing them together just long enough for the sperm to be transferred. The balancing often takes longer than the actual “kiss” and several more copulations occur during this period, increasing the chances of successfully procreating.

Various bird species like ducks, swans, and geese do not have a cloaca. Instead, male birds insert a sort of penis identified as a phallus into the female when they mate. It is formed by an extension of the walls of the cloaca and is greatly helpful in allowing certain waterfowl types to mate in the water without having the sperm washed away due to an exposed cloaca.

Right after an egg is fertilized, the embryo gets activated and starts the developing process of baby birds. A tiny white spot on the yolk called the embryonic disc is what turns into chicks, with the amount of time until it hatches depending on the adult bird’s size. It typically takes a couple of weeks before the chick’s feather follicles and claws take form. It is also at this period when the egg-tooth, a tiny but sharp cap on the tip of the beak, begins to grow. This minuscule but essential structure helps the baby bird peck its way out of the shell, eventually falling off a few days after the hatch as it is no longer needed.

Birds remain near their nests after mating to raise their brood. It is of utter importance to them that they remain hidden, particularly from their predatory peers, for them to safeguard their young. Too much stress may cause the adult birds to abandon or move their nest altogether, which may be detrimental to the survival needs of their youngster.

So, how do birds reproduce? By laying eggs. Although the breeding process is similar to that of humans and other mammals, their ways are distinctly different. And even though birds are amazing, it is absolutely impossible for them to copulate while in flight. Unlike us humans.

Budgies Parrots Mating – Video about how do birds reproduce

How do birds reproduce sexually or asexually?

Birds reproduce sexually. It takes both a male and a female bird to make eggs. The male bird has sperm that he puts inside the female bird’s body when they reproduce.

How do birds procreate?

The cloacas of birds are usually hidden deep inside their bodies, but during mating seasons the male and female bird’s swelling cloacal openings protrude slightly outside. When they’re feeling frisky for each other, both males’ sperm which has been stored in his cloaca is deposited into the female’s when she rubs her swollen cloca against him. The journey up begins from there as it goes through a chamber to eventually fertilize an egg!

How do birds reproduce?

Many small birds use a “cloaca” system where they transfer sperm into an oviduct (a female organ that produces eggs). This may be accomplished with or without physical contact between two individuals, but most often it involves both male and female roles.