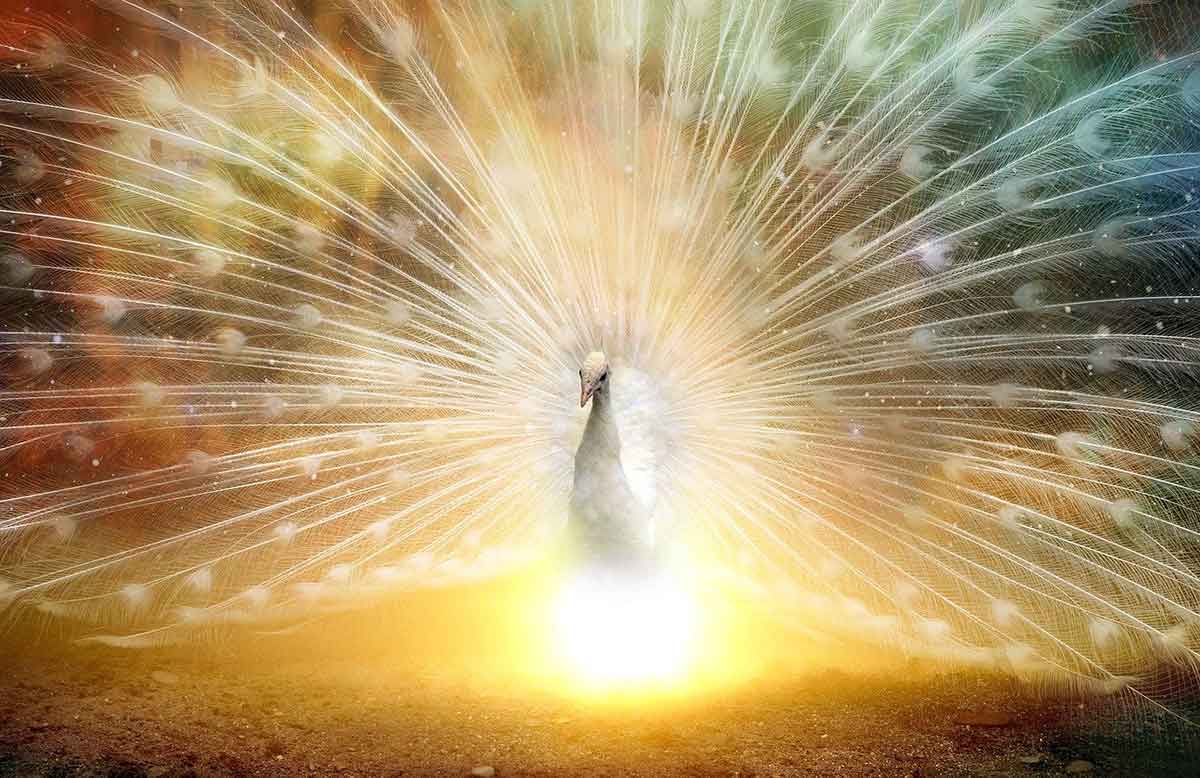 Luck From Above: How Even A Bird’s Poop Can Bring Luck

In many cultures, birds are seen as mystical creatures that carry with them the promise of good fortune and prosperity. From being spirit messengers to physically embodying fertility, strength, and protection, birds and their symbolism vary and are often based on their distinct species and kind. While birds remain a prominent symbolism in various religions, cultures, and art, the distinction of being chosen to bring back proof that the challenges of the great flood have finally ended leads us to break down the list of birds that bring good luck.

With their amazing ability to soar above the trees and among clouds, as well as their capacity to dwell on land and water, birds are perhaps one of the very few creatures that make humans envious. Regarded for their attractive and vibrant plumage, we relish in their soothing songs and admire their loyalty as most birds develop tight bonds that allow many of them to mate for life.

Often associated with the arrival of good news, here’s a list of birds that bring prosperity, success, and good fortune:

Spotted on almost all continents, these highly social birds are often seen in large flocks, making cranes a symbol of love for family, friendship, fidelity, and commitment. As one of the mystical or holy creatures in Japan, they are depicted as symbols of longevity for they are believed to have a life span of a thousand years. Characterized by their slender legs that seem to go on forever, these elegant and graceful birds often come swooping down into our lives to provide prosperity and abundance.

Unless your house is situated near marshes, rivers, or ponds, it is not every day that you hear a duck quack. While it may sound annoying for some, ducks are a symbol of abundance and the great progress that is coming your way, telling you that although you may be going through some rough patches at the moment, things in your life are about to change for you the better. Not only are these waterfowls known to symbolize encouragement, family, clarity, love, and devotion, but they are also known to smoothly paddle into our lives bearing the gift of prosperity, wealth, and good fortune.

Known to climb on higher surfaces to show its dominance over a territory before crowing, the adult male chicken (rooster) represents bravery, masculinity, strength, and observance. Notorious for its unique habit of waking everyone up just before the break of dawn, this enthusiastic and territorial bird is an omen of abundance, prosperity, and good luck, with the ability to chase away evil spirits from people’s homes (read more about the chicken symbolism).

Revered as a representation of wisdom and divination, the night-dwelling owls are believed to be messengers from the afterlife that flies into our consciousness bearing the gifts of clarity, attentive observation, and favorable luck. Although the Greeks saw these mystical birds as the symbol of Athena who is known as the goddess of foresight, intelligence, and war, the owl was greatly regarded as an animal guide of superiority, success, and victory. Check out our post about owl superstitions as well.

As the only mythical bird on our list, this magnificent bird packs a lot of heat when it comes to symbolism. Believed to have been reborn from its own ashes, the Phoenix is believed to be an embodiment of rebirth and purification, in which several Asian cultures associate their image with nobility, great opportunities, and better fortune. Regarded as the Red Raven in feng shui, this amazing bird represents hope, resurrection, immortality, grace, and solitude which makes many people believe that it is greatly a personification of Jesus Christ.

Typically spotted sporting plumage of black, white, and royal blue, this majestic-looking bird is well known in several Asian cultures as a symbol of lasting joy, love, and good fortune. While the Magpie’s impulse to steal food and adornments for their nests puts a tad of negativity in their image as it makes them a representation of craftiness and trickery, they are connected to a number of stories and myths that tells about the promise of a new and successful romantic relationship.

The story of the stork carrying babies may have originated from Greek mythology involving Hera and a beautiful queen that was transformed into a bird who was simply retrieving her child. Such a legend has made these birds which can grow up to five feet in height symbols of fidelity, an expanding family, and fortunate opportunities. Brandishing long legs and large beaks that can ideally fit human babies, they are powerful representations of birth and new life, wherein these huge, and at times aggressive birds, remind us of new beginnings, spiritual awakening, and favorable luck. Read more about the stork symbolism here.

Typically spotted in forests and habitats with lush vegetation and humongous trees, these small birds are popular or notorious for their unusual behavior of using their beaks rapidly and repeatedly to penetrate through tree trunks or branches. By resembling the tone of a drum which is greatly related to the sound of a heartbeat, they remind us to pay attention to what our hearts are trying to say, making woodpeckers symbols of good communication and new opportunities that may bring in good fortune. Read more about two distinct woodpeckers here: Downy Woodpecker Vs Hairy Woodpecker.

Much like most male species, these birds of amazingly attractive plumage use their asset as their leverage to get a girl. If that doesn’t sound eerily familiar, it is best that you wait for this imposing bird to show off its feathers and allow yourself to be captivated by its natural beauty. The peacock is acknowledged as a symbol of prosperity, good luck, and even royalty. This magnificent-looking bird is a vision of confidence, refinement, pride, and beauty which can be displayed if you are fortunate enough to see it flex its plumage.

Sporting a red or bright orange breast, this small bird carries powerful symbolism such as happiness, new beginnings, opportunities, and good luck. Legend has it that this brightly colored bird sang its sweet and melodious songs to Jesus while he was dying on the cross, in which the blood from his wounds was smeared on its breast creating the orange marking. Also a known symbol of Christmas, Robin birds largely remind us of hope and rebirth, as well as an indication of positive experiences occurring soon.

Having been long associated with myths and omens, our ancestors believed that our feathered friends are messengers from gods or at times, a representation of the gods themselves. Since most cultures agree that certain birds bring about good luck, having an encounter with these amazing creatures encourages us, at least spiritually, to keep our heads up as favorable days are just on the horizon.

Is It Good Luck When A Bird Flies Into Your House?

Created as the more dominant species, we tend to take the presence of birds in our daily lives for granted. Finding out just how many myths and beliefs there is that concern these winged creatures opens us to a world of superstitions that involves both good and bad luck. As various cultures believe that a bird flying into your home brings about an important sign, some would say that it symbolizes you as being trapped and struggling to get out. Whether it is in a toxic relationship or a dead-end job, a bird in your house could mean that you simply have to find a way to get out of your uncompromising predicament.

However, many ancient people believe that a bird flying into your house signifies that a very important message is on its way. Widely known as the messengers of the gods, the bird might be carrying a message from a higher spiritual being so it might be best to give it your utmost attention. While some would say that it could be an omen of a loved one’s passing, others see it as an indication of a physical or spiritual transformation. Read more about the meaning of a bird in your house.

What About If A Bird Poops On You?

For some reason, it happens just when you have your best shirt on and are about to go somewhere important. Although you may not think or feel so at that time, a bird dropping its lunch on you is regarded as a sign of good luck. Placed in the same regard as horseshoes and a rabbit’s foot, a bird depositing its poop on you is considered fortunate because of the rarity that one of the countless birds in the sky will drop its bomb exactly on you. Not to be confused with the luck brought about by stepping on poop, but since the chances of having it land on you from above are so small, it makes it a symbol of good luck waiting for you just around the corner.

While it might be hard to believe that something so disgusting can be quite rewarding, our ancestors believed that bird poop signifies good health, vitality, and abundance for it came from the fact that the bird was able to find enough food to get its digestive system to function. Using much wisdom, ancient cultures would attest that when a bird poops on you, it is simply sharing its affluence and prosperity, making you one extremely lucky person.

Before stepping outdoors to try and catch some of this luck, it is best to understand that birds are recognized as powerful and compelling symbols because of their ability to fly. These incredible creatures serve as our connection to the heavens since they can soar through the sky and communicate our prayers and requests to the gods. While there may be times when being lucky is not enough, the birds on our list can help take you a step closer to abundance, prosperity, and your dreams.