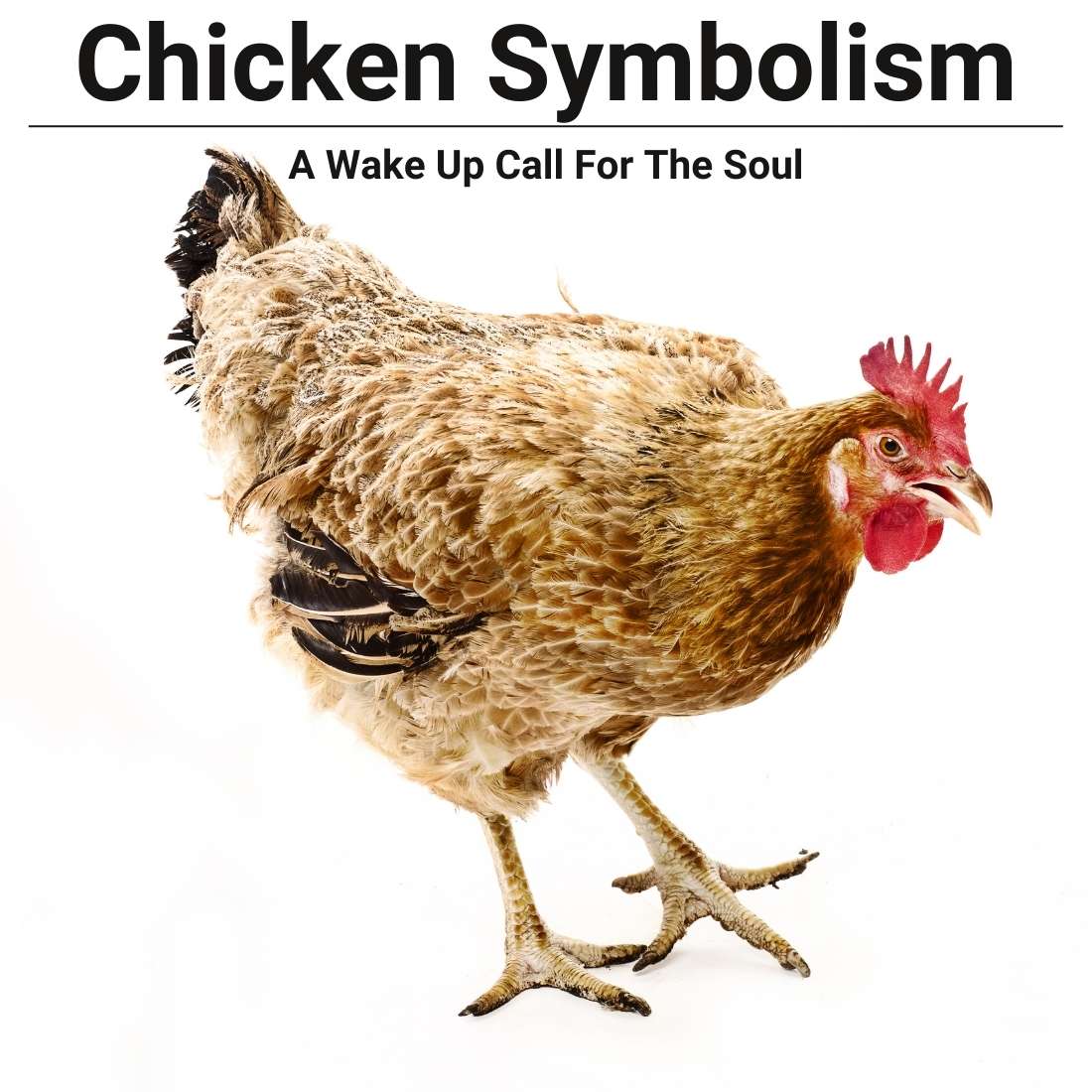 Chicken Symbolism: A Wake Up Call For The Soul

Whether on the farm or on your dinner plate, chickens bring wonder to our lives by simply gracing us with their presence. Known to have better vision than humans, these relatively laid-back creatures are admired for their ability to foresee impending weather disturbances. Generally agile, spirited, and brimming with vigor, they would often trot in to serve as our guide through the stormy times in our lives. A powerful and frisky spirit animal that can bring an encouraging message as early as 3 AM, let’s peck into the extraordinary meaning of the chicken symbolism.

“The key to everything is patience. You get the chicken by hatching the egg, not by smashing it.”

What does a chicken symbolize?

The chicken is a domesticated bird that has been around for thousands of years. It is most well-known for its role in the agricultural industry, but chicken symbolism and meaning go far beyond that. Chickens have long been seen as spiritual animals totem by many cultures all over the world. There are many interpretations of chicken symbolism, but some of the most common themes include new beginnings, fertility, and protection.

Recognized for their dust baths to rid themselves of parasites, as well as their peculiar trait of shedding feathers when stressed, the chicken’s image tells us to be on the lookout for events that seem unusually strange. Darting in as a reminder for us to be more cautious and vigilant, these symbolisms will prove that they are more than capable of just providing us with a nutritious staple for breakfast.

Apart from their ability to predict rain, the chicken’s more advanced eyesight allows them to identify ultraviolet light. While this may simply give them a heads up on sunrise way before humans can, it indicates our need to pay attention to the events as they happen. Gifted with strong impulses, this aggressive creature tells us to listen to our intuitions for they often bring the most basic yet effective solutions to certain problems.

Did you ever find the answer as to why the chicken crossed the road? If not, then maybe you really need to explore some more. Rarely seen standing on their feet in barns and the wild, these typically energetic creatures encourage us to wander further and to leave our comfort zones for this is the only way for us to realize how talented we really are. Although they are not known for flight, they appear in our lives stirring us to spread our wings and soar high.

Keeping an eye out

If you haven’t been living under a rock, I bet you have been asked whether which came first between the egg or the cock. While this age-old controversy requires you to be sharp, which coincidentally is one of the traits that the chicken stimulates in us, this protective bird inspires us to use our unique skills to create an awesome version of ourselves. Often found warming their eggs until they are ready to hatch, they represent our capacity to be protective of our loved ones and how we constantly aim to provide them with the things that they need and want.

A notorious early riser, there is only a handful of us who can boast about waking up before the chicken daily. Using coos and clucks as well as an early morning crow, it signifies our need to allow our voice to be heard as our opinions may end up being helpful to some. Not only can it inspire others to also share their ideas, but it also shows your trustworthiness and innate intelligence.

Revered for being the connection between the darkness of the underworld and the light of the heavens, several traditions believe that the chicken is a divine messenger that provides us with protection and good fortune. Its enthusiastic morning cry is a call for us to awaken our spirituality (if you’re interested we did a post about the best spiritual awakening movies on Netflix), particularly in times when we doubt our faith. Observed to have shown compassion and pity to chicks in distress, these warm-hearted creatures invite us to connect with others as it enables us to feel their worries, be concerned about their well-being, act with kindness, and be more sympathetic to the rest.

Using distinct sounds of various meanings, chickens have been observed to possess the ability to speak with each other. Indicating the good that comes from effective communication, these remarkable creatures teach us how reaching out and exchanging ideas can reduce conflicts and increase your chances of developing lasting relationships. Believed to have descended from dinosaurs, which probably explains their occasional aggressive behavior, the chicken scampers into our life to give us the strength and wisdom to face our daily battles and to relentlessly go after the things that we have long desired.

As chickens struggle to live with the unflattering label of being cowardly and fearful, many of us perceive that having them as an animal totem signifies our tendency to be apprehensive. However, while it is highly unlikely for us to see them protesting over our fondness for their meat, these fearless creatures give us the courage to stand our ground against the challenges of ever-changing weather changes. As a bird that sees the transition from darkness to daylight as a part of its routine, it symbolizes our capacity to gain enlightenment and to see things from a much better perspective. Add to that its distinct crow that occurs like clockwork, then we have an animal totem that urges us not just to be punctual in respect of the time of others but also the importance of speaking up and staying connected.

Inspiring us to trust our instincts even further, the chicken animal totem tells us how we should never ignore our instinctive thoughts for it almost always leads to amazing results. A symbol of our protective nature kicking in each time our loved ones are in danger, it reminds us of how we are capable of doing the most exceptional things to create a comfortable shell of warmth and contentment.

The chicken has been a symbol of family and unity for centuries. In China, it’s not uncommon to find the bird on Valentine’s Day or during certain holidays such as New Year because they believe that eating one whole serves an important purpose- solidifying connections within your community while also emphasizing how closely related everyone is by feeding each other with their own hands!

The hen symbolizes loving care and protection. The chicks, who are like human children but tend to wander off on their own adventures can be seen as representative of how Jesus viewed the Hebrew people during his time here on Earth – with respect!

Meaning of dreaming of chicken

If you dream of chicken, it could symbolize a variety of things. Chickens are often seen as symbols of new beginnings, fertility, and protection. So, if you dream of chicken, it could mean that something new is about to enter your life. It could also indicate that you are feeling fertile and creative. Alternatively, chicken symbolism could also represent your need for protection or guidance. If you feel like you are being chased by a chicken in your dream, it could be a sign that you are running from your fears.

Chicken dreams are also a signal of prosperity and good fortune. They can also symbolize your potential to be reborn, an opportunity for self-rediscovery that will lead you towards greater happiness in life.

The chicken is perhaps one most popular animals associated with dreaming because it represents new beginnings; how we should embrace change if only so changes happen around us too! The way people view this bird tells much about themselves – what do they want from their future?

While chickens may seem like any other bird, learning about the messages they bring shows that even the oddest among us are capable of performing extraordinary things. Although many of us see them only as perhaps the most well-known pedestrian whose origins remain in question, the chicken and its symbolism can no doubt bring nourishment and flavor to our body, heart, and soul.

1 thought on “Chicken Symbolism: Chickens As A Spiritual Animal Totem”