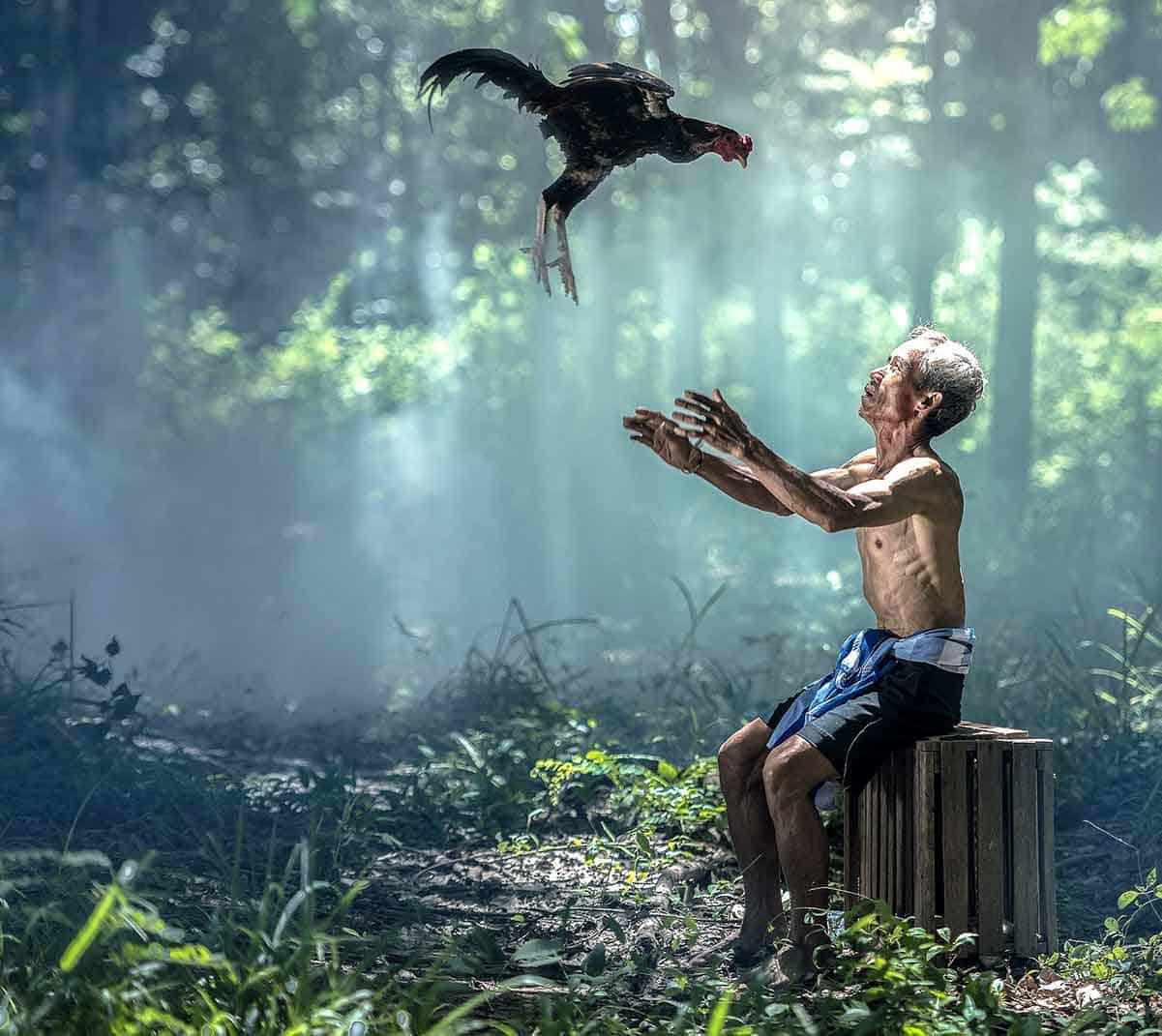 Rooster Symbolism: Interpretations That May Ruffle Your Feathers

Regarded by most as nature’s morning wake-up call, the rooster’s close relevance to sunshine has long associated it with time and punctuality. From the symbolic fanning out of its feathers to the distinct thumping sound created as it flaps its wings, this highly sociable bird can teach us tons about life if only we took the time to scratch and dig a little deeper. Known to be flamboyant and a tad excessive in confidence, this bird of bright combs and a dangling double chin can help us achieve enlightenment, making it all the more interesting to peck around and learn about the rooster symbolism.

Symbolic Meaning Of The Rooster

Because of the events leading to Jesus’ death, Christianity has always given the rooster a negative connotation. As the signal of one of the apostles’ final betrayal of Christ, the only bird in the Chinese Zodiac calendar has become a symbol of our vigilance against evil. Originally referred to as a cock or cockerel until a rude connotation sprung, the vibrancy and diversity of its plumage is a known spiritual encouragement that tells us about the benefits of fanning out with brilliance. It reminds us that by showing the world our personality, traits, and talents, we encourage others to be more confident and brave.

While most cultures see the rooster as a symbol of illumination, the Celtic and the Nordic describe it as a messenger of the Underworld, calling out to the fallen souls and screeching out warnings. Believed to ward off all the evil spirits that lurked about during the night with its crowing, the people of Ancient Europe saw the rooster as a symbol of dominance, pride, and courage. Greatly associated with good fortune for centuries, having the bird’s image in your home was perceived to bring in abundance and prosperity.

In Portugal, a land ironically famous for their Peri-Peri Chicken, legend has it that a rooster once saved a pilgrim’s life after he was wrongfully accused of a crime. Declaring that the roasted bird would prove his innocence, the supposed dead rooster sprang back to life and crowed out loud, sparing the man’s life. Known as the Rooster of Barcelos, these overprotective and aggressive birds became a symbol of protection, justice, and luck.

Fearless and steadfast, this unflinching barnyard fowl of magnificently coloured plumage has been observed to strut around to watch over and protect its flock. The rooster’s ability to perform a fun and entertaining dance called tidbitting to let other chickens know about the availability of food is proof of its immense intelligence and its role as a great provider. Such traits have made the Chinese believe that it is the perfect embodiment of responsibility, courage, kindness, confidence, and marital fidelity. Not only does this amazing bird’s association with dawn makes it a symbol of constancy and punctuality, but Feng shui experts also believe that by painting a red rooster on a house’s wall, it acquire protection from fire, while a white bird drives away demons.

As this bird’s loud annoying screech may have wakened you more times than you can remember, it is perceived by some cultures, particularly in Zoroastrianism, that its crow is a cry of victory over the evil and darkness of the previous night. Although people of Ancient Greece associate the rooster with the goddess of the Underworld Persephone, its shriek at dawn was seen as a salute to the sun as it rises each morning. It is said that while the bird has always borne a connection to the concept of darkness and death, the rooster’s affinity to the rising sun has made many people see them as a symbol of new beginnings, hope, and resurrection.

The apostle Peter’s denial of Christ, thrice before the rooster crows, left the world’s first Pope emotionally and spiritually broken and heavily repentant. This biblical event made Christians believe in a very powerful message that tells us about God’s capacity to extend his pardon to sinners who atone. While reformation is often expressed in times of a broken spirit and emotional distress, the popular Christian image of Peter sitting on his chair accompanied by a rooster is an indication of forgiveness and redemption.

Known as the closest living relative of the ferocious Tyrannosaurus Rex, this relentlessly territorial bird comes into your life to help correct the mistakes of your past. By providing you with a clean slate no matter your failures and anxieties, the rooster helps enhance your level of confidence, enabling you to power through certain difficulties and challenges. Adding to your self-esteem, this impressive-looking bird of vivid multi-colored feathers builds up your ability to catch the attention of your peers. It encourages you to speak your mind freely and to find a group where you can express yourself fully without hesitation, as it guides you towards a life without the fear of being judged.

By enhancing your self-acceptance, not only does the rooster spirit animal improve the way you see yourself, but it also empowers you to share your views and opinions without fear. This remarkably courageous bird will invite you out of the shadows to share the positivity within you with your community, all while teaching about the importance of integrating your physical and spiritual realms.

Turning you towards optimism, having the rooster as your spirit guide gives you the ability to remain enthusiastic about your goals and to find humor in even the most daunting situations. Bear in mind that by welcoming the confidence of the rooster into your life, you will be able to take advantage of every opportunity without needing to rely on others. The bird’s innate capacity to keep track of time could be an indication of your need for a wake-up call to straighten out both your physical and spiritual life.

Allowing the rooster into your spirituality awakens your mind to what the spirit realm offers. Not only will your mind be sharper but it also entices you to stay on high alert to ensure that no one can take advantage of you. Providing you with unmatched focus and attention to the events of your life, this magnificent spirit animal reminds you about the importance of taking short breaks, for even the strongest and the most confident cannot survive a constantly hectic life.

Appearing in times when you need a confidence boost, the rooster spirit animal struts into your life to give you the courage to spread your wings and fly out on your own. By removing the pressure of blending in with others, you get to focus more on your goals, making all options easy and possible. Resourceful, vigilant, and masculine, the rooster spirit animal is telling you to let go of old habits that may be affecting your growth. It serves as encouragement for you to work harder and to reform yourself as you take the role of flock leader.

Whether it is a sign of an approaching weather disturbance or a sense of an oncoming predator, a rooster’s crow is not exclusively reserved for dawn. Known to be diurnal creatures as well as a symbol of the sun, a rooster crowing at night would no doubt incite a range of metaphors. As a known symbolism of death, loss of faith, or the darkness within our souls, the period from dusk till dawn is an indication of suffering and hopelessness.

Crowing at twilight, it could mean that unexpected news is slowly creeping its way onto you. To make certain that such a message, good or not, won’t come as a complete surprise, the rooster goes out of its way to give you a heads up. Known to thrive particularly well during the day, hearing the distinct yell of this flightless bird is said to be an implication of the presence of death or a bad omen. It may be the rooster’s last best effort to scare the unwelcome omen away, or to at least warn you of its potential harm.

Much like the gladiators of the past, roosters were first domesticated not for the purpose of creating Buffalo wings or nuggets but for making them fight. While it is a popular symbol of a new beginning, good fortune, and wisdom, its imposing stance towards hens and its flock has made it a representation of masculinity and vigilance. With its image finding a spot on the arms and helmets of Celtic warriors, they were at times defined as a fighter and symbol of war.

The bird’s temper and territorial nature as well as its fondness for fighting made it the perfect animal to tame and eventually train to what became cockfighting. Along with such a long history, it is easy to see that fighting is actually in the rooster’s blood for they are also revered to represent competitiveness and bravery. Often fighting to the other’s death, these extremely tenacious and resolute warriors can teach any aspiring soldier a thing or two about real courage.

Standing for pride, hope, and resurrection, this fascinating bird has no doubt tickled the minds of those seeking to break down its various interpretations. Although it spends its entire day scratching and pecking around the barn, it is best to decipher the messages behind each rooster symbolism.