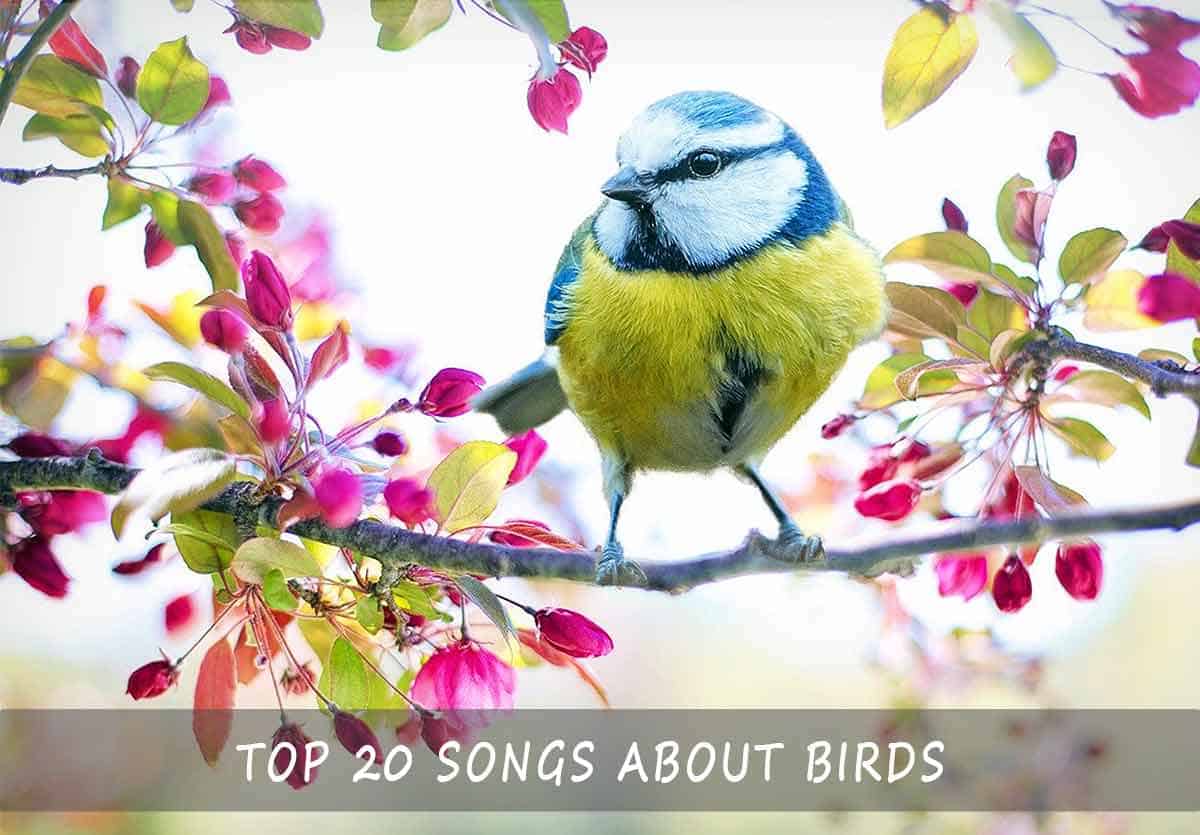 It could be that you love nature and prefer the sweet calls made by different types of birds. There are several songs created on birds that have become huge hits. Popular singers have sung melodious songs on birds to celebrate the freedom, strength and joy which they symbolize.

It was considered to be 1984’s haunting rock ballad that became a smash hit. The Rolling Stone Magazine had voted it as among the 500 best songs of all time. It was also counted among the top 500 songs to shape Rock & Roll’ by the Rock and Roll Hall of Fame. The song is about the lover having just ended his relationship and wanting to know the reason for his rejection. The dove represents peace as well as hope and anguish. Prince had two pet mourning doves at his home named Divinity and Majesty. However, they stopped singing after the death of the singer in 2016.

Bluebirds are known to symbolize joy and happiness. The narrator in this 2019-based country song makes a statement using a perky bird about her resilience. With age, it is essential to stay competitive in a career. Also, it is essential to deal with issues arising in love life. She tries to have a positive attitude in this song.

Sia had penned this self-empowerment anthem, but got turned down by Rihanna and Adele. Hence, she went ahead to record this song herself in 2015. The song is about trying to escape a toxic love relationship. Here, she considers herself to be a broken bird having clipped wings. She felt maimed due to the cruelty she had to face in her relationship. It was like she was unable to sing as she struggled on the ground. But she tries to fight back, realizing that it is not necessary to be perfect. The fact is she sings for freedom, love, and most of all for herself.

This 2018 electro-pop tune is about a bird trying to construct a nest. He feels optimistic and packs his bags, eager to find an ideal nest on an empty ground, window box or porch. He sings aloud and celebrates this beautiful day since he is almost halfway home (read more about owl symbolism or the wren symbolism).

This 1992 song is about a couple in a long-term relationship. Here, they are compared to two loving birds. They are hopeful, fragile and share together a song of happiness. They are also faced with different challenges in life like jobs, children, personal losses, mortgages, etc. It beautifully describes different stages of their lives ranging from ages 15-83, with them trying to brave the storm. Read more about Sparrow symbolism here.

If your relationship has become history that does not necessarily means there are no feelings about him/her. This 2019-based pop is about a man who reminisces his failed love affair. He wishes the relationship to be warm. He feels that both lovers may take different paths to end up becoming strangers. He compares it with birds that fly in different directions. He also concludes that everything is short-lived, but with a hope of getting reunited again.

This 1997-based country tune is about a woman who is in deep love with an abusive man. Even others around her find their relationship to be very painful. But she stays on with the hope of her partner changing or being sorry, allowing her to continue living with him. Crying becomes the narrator’s habit and her spirits breaks-down similar to the bird suffering from a broken wing. She is faced with harsh words. But she escapes her tormentor to enjoy freedom.

‘How shall a Sparrow fly’, Ryan Bingham

This 2018 song features lonely vocals along with strumming mandolin. This song was featured in the picture ‘Hostiles’. This haunting song is played when the tired travelers stop to get rest at night. The tune is quite sorrowful and searching asking rhetorical questions concerning the welfare of the bird suffering from a broken wing. It symbolizes the indigenous people.

This 2010 pop is about a woman who is rejected by her lover through a letter. She along with her rugged happiness bluebird tries to fly away. She was also rejected before and hence, understands what steps to be taken next. She pretends to be fine and flies away with her bluebird. She also is determined to leave her failed romance behind.

This 2019 ballad sent across a message in the form of a happy sparrow that soars high and wins the world. This song offers confidence, encouragement and hope. Emile describes the sparrow’s strength of purpose and courage.

This 1694 song is meant for children and appears in the Walt Disney classic movie ‘Mary Poppins’. It is about an old woman earning some extra income by peddling bird crumbs at St. Paul’s Cathedral’s steps.

This 1990’s song was sung by Leonard Cohen. Here, the birds’ images are used to convey the narrator’s emotional experience as he lives dangerously. He expresses his love, but at great cost.

This 1991 track was considered to be Billboard country chart’s last solo for ‘ole Watasha. It symbolizes the powerful eagle. Being a peaceful person at heart, the narrator tries to be himself even as he is provoked by something or someone. He warns others not to underestimate him.

This 2000 Grammy award-winning song is about a restless young woman. She informs her partner of leaving him someday. Although her love for him is true, she feels that at heart she is more of a nomad. She just like the bird needs to fly away one day as there is no permanent home for her.

Vultures feed on carrion and at times dying and severely injured animals. Mayer compares the executives in the music industry to these scavengers. This 2005 pop song is about the dark side that comes with fame. On achieving two Grammy Awards, he felt drained spiritually, physically, and emotionally by the pressures that come with fame. He also regards himself to be in treading waters and being tested personally by the world. According to him, the uncaring executives in the music industry only wanted much more from him. He rather felt like a cornered prey. Read more about vultures symbolism here.

This 1958 Rock and Roll went on to become a major hit. This sweet song is concerning a robin that spends its days on Jaybird Street in treetops. The Robin along with Raven, his girlfriend at night joins their avian friends to flap feathers at the ‘bird bandstand’.

Mockingbirds never seem to stop their calls even during nights. They are known for their hyper singing habits and are used in ‘Hush Little Baby’, a traditional children lullaby. This 1974 pop is based on this lullaby. In this song, both partners seem to have agreed to have another mockingbird with a sing-or-else assurance. In case, the birds fail to sing for the beloved one, then they are likely to produce diamond rings or gifts. But being noisy birds, rings and other contingencies are not essential. Hence, the song concerns several empty promises made by the singer that does not have to be fulfilled. Check also our post about the mockingbird symbolism.

With this 1993 pop song, Annie Lennox started going solo after playing with the Eurythmics. This song is concerning a little bird just fallen out from its nest. Lennox labels herself to be a troubled soul, weighted to the hard ground. She self-pities herself and hopes the little bird to be blessed. She tries to make her dreams come true by emulating the bird.

It is perhaps a mental problem or an existential crisis. This 2016 airy song is sung by Aurora, the Norwegian electro-pop singer. In this song, she uses diverse nature imagery with which she tries to connect with reality. She goes down by the river with frozen tears in her eyes trying to remind herself of the reason to survive.

This 1976 rock song has lyrics that suggest the desire to move ahead from the issues faced. It seeks to venture out of the current haunted surroundings into the wide-open sea. The eagle is considered to be the bird of hope, strength, and pride. It exhibits the desire to fly-through revolutions of change, carrying its spirit to freedom. It is also hopeful to come up with appropriate solutions to solve those earthly problems which are faced today.

Who’s ever going to top the Beatles? They will forever gonna be #1…

Getting to know the top bird song list is sure to allow you to hear to them during your free time.