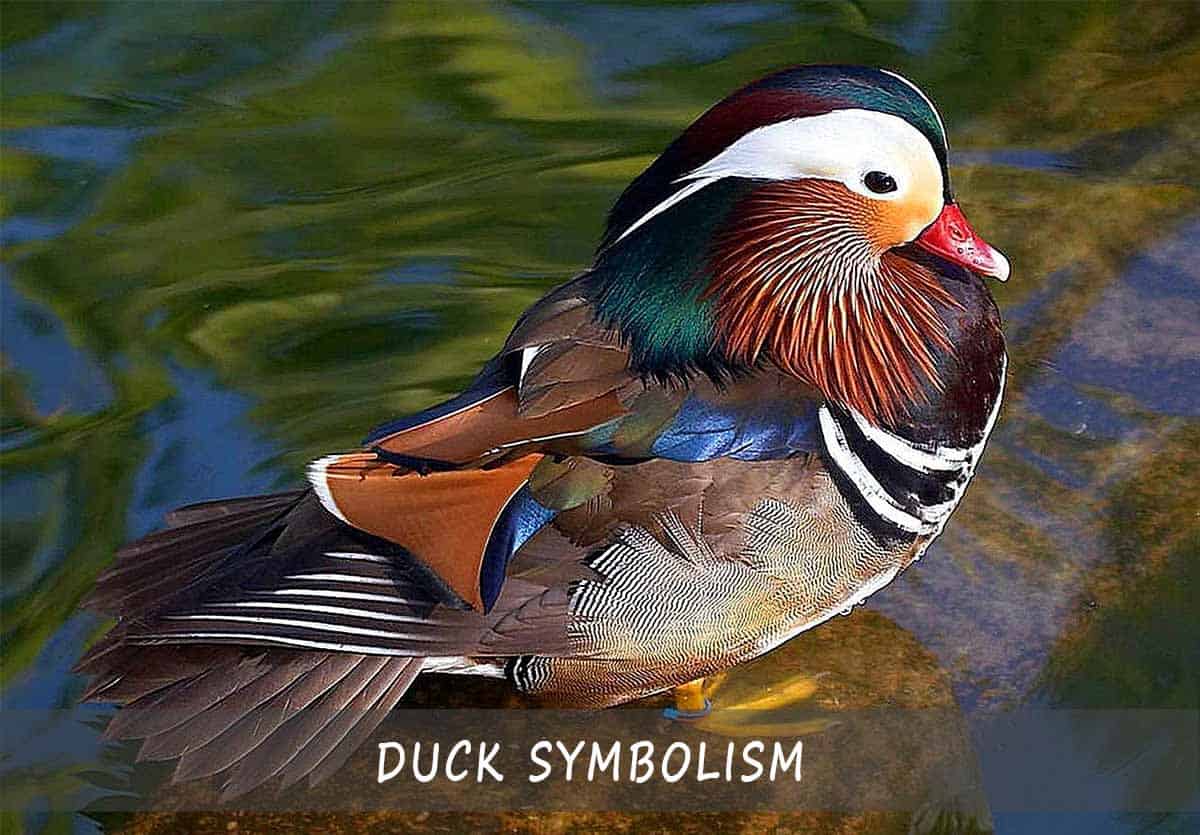 Ducks are some of the most common and recognizable birds in North America. They have a number of symbolic meanings, such as being seen as guardians for children and reflecting the calmness of water. The ancient Egyptians also saw ducks as symbols of fertility, while Native American tribes believed that they had healing powers. Ducks are found throughout many cultures with both positive and negative connotations: from love to sickness…

The duck belongs to Anatidae (waterfowl) family and includes many animal species in this group. Generally, ducks are aquatic birds found in both fresh and seawater. Females are called ducks and a male duck is called a drake. They are monogamous for just about a year or so. Long-lasting bonds are developed among larger species. The mothers take care of their young ones and nurture them. In case, the young ones do not hatch on time or develop properly, then they may abandon a few of them. However, some species are found to be nomadic, trying to seek better living conditions.

What Does a Duck Symbolize?

They symbolize water energy and emotions. They will enable you to trust in your intuition while providing inner guidance. In short, the duck symbolism stands for a few of your life experiences like:

There are different meanings associated with the duck totem. They are as follows:

Being your totem animal, you are likely to be more inclined and responsible for your community. You will be social and enjoy being in the company of acquaintances and friend circles.

You will also enjoy helping others, nurturing and take care of your beloved ones. You will also be a good adviser since you understand better human psychology. People in this group also seek comfort and provide to those who believe in you. You will also enjoy their closeness, such that you might block their progress unintentionally. You are sure to live a wonderful life in the ‘present’ and try to enjoy each moment spent. You will also be quite conventional and find the ‘status quo’ to be quite satisfactory. You will fight to protect your beloved ones and be willing to do anything for them. At times, you may be ready to sacrifice yourself to help others.

The Duck Symbolism in Different Cultures

Native American tribes in North America saw ducks as a symbol of fertility. Ducks were seen as being able to provide multiple opportunities for food and are also known for their calmness around water, which can be symbolic of peace or tranquility. However, they could also be seen as symbols that foreshadowed sickness because the death rate from disease (especially epidemics) was high during this time period. They believed that these birds had healing powers, so they brought an injured or sick person gifts such as food, clothing, and furs – but also live waterfowl at times.

In Christianity the Duck is a symbol of baptism. A duck was believed to be able to live in both water and air, which is symbolic of being baptized into the Holy Spirit (Matthew 28:19). The Christian Duck is also seen as bringing together opposites, such as light and darkness or life and death.

In Asian cultures, ducks are seen as symbols of love, fertility and prosperity. The Japanese word for “duck” is kamo, which shares a pronunciation with the word for happy (kangaeru) while in China they can be likened to children because their quacking sounds like the Chinese words for “mother” or “child”.

Ducks have been used traditionally in Asian culture on wedding day gifts such as paper lanterns shaped into duck shapes that would hang from trees lining routes between houses during weddings. In Vietnam, some newlyweds also release live ducks at the end of ceremonies to symbolize hope and happiness.

Perhaps, you may be dreaming about ducks lately. It indicates a strong connection with your subconscious content and emotions. If you dream of ducks swimming or even ducks on land, then it indicates you being vulnerable. It also depicts that you are trying to confront your emotions and move on in life. It also indicates your ability to adapt easily to some circumstances.

If you dream of flying ducks, then it can be a sign of spiritual freedom and spiritual advancement.

At times, dreaming about this totem bird may indicate the feeling of being someone’s target. It can also mean postponing some issues rather than confronting them with confidence.

If you dream about a drake, then it indicates positive emotions, experiences including a great future. On the other hand, if you dream of a female duck, then it may indicate negative emotions and experiences. It means you are likely to experience a difficult stage in life.

Again, if your dream involves a pair of ducks then it indicates the immediate need to be balanced emotionally. It also signifies the need to deal with repressed emotional issues and negative emotions.

Bird tattoos carry a lot of meanings and have become popular these days! You may want to have a duck tattoo etched on your body. Perhaps, doing so will take you back in time, where you saw cartoons of funny duck characters. However, you need to be aware of the symbolism and meanings associated with this totem bird tattoo.

Ducks are considered to be highly resourceful animals and can live comfortably both on water and land. They can adapt well to their surroundings. They also have developed the ability to stay protected from their predators.

If you are planning to have duck tattoos, then you need to take into consideration some symbolism and attributes.

The duck is an adorable creature due to its high adaptive features to the surrounding environment. They also appear graceful when swimming on the water, walking on land or flying in the air.

When duck tattoos are concerned, they may associate this bird with cartoon characters or hunting. The meanings that come with this totem bird are diverse much similar to their feather patterns. Some considered it to be good luck if you see ducks in your dreams. There are some who considered it to be a conservation symbol or a commitment to enhancing the environment. It also signifies preserving natural habits, allowing your future generations to enjoy the beautiful world. Some ducks are regarded to be symbols of male fertility. Its duck is used in Pagan cults as a unique symbol.

At the same time, the duck is regarded to be the symbol of transition, resourcefulness and adaptability. The tattoo of ducks in water also signifies persistence, migration and resilience.

Thus, getting to know the meaning, the Duck symbolism can help you to know how it impacts your life. This way, you can have a better and well-balanced life that you can enjoy to the fullest.

Ducks can be symbolic for many different things. They represent fertility, love and being loved, peace in nature or even a sense of safety. Ducks are also often used as symbols of unity because they always travel together in large groups with their families. The meaning behind the duck will depend on what type you have, but we typically see more ducks used to symbolize happiness than anything else! Some people believe that having one inside your home is good luck or protection from evil spirits.

There are lots of meanings attached to this animal so it’s important to know which kind you’re choosing before naming them something specific like “Ducky.”

Video: The Duck Spirit Animal And Its Graceful Wonders