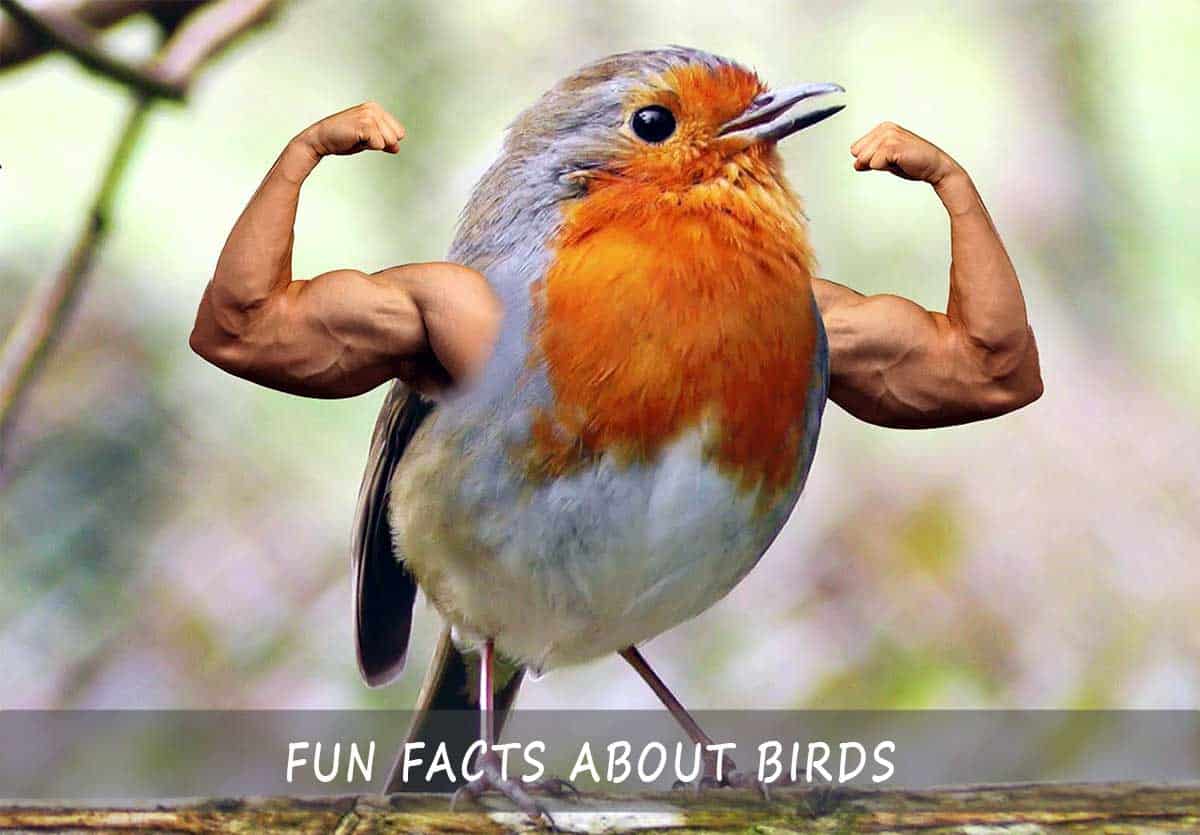 Birds are the most diverse class among terrestrial vertebrates and over 11,000 different species of birds are currently known. They are social animals and communicate with visual signals, voice calls, or singing.

These are some of the fun facts about birds

2) The only poisonous bird in the world is found in Papua, New Guinea. Her skin and feathers are poisonous.

This attractive-looking bird, whose Latin name is “Pitohui dichrous” was discovered in Papua New Guinea by an American scientist when he was bitten while trying to catch her.

When I tried to take the bird out of the nest, it scratched my hand with its sharp beak. I was in a lot of pain, so I put my hand in my mouth and licked the wound. Then my mouth started tingling and burning. Only when the same thing happened to another researcher, we sat down and started thinking about that, and the locals told us that that happened because those birds were poisonous.

3) Birds are the fastest breathing animals, due to maintaining a high level of metabolism during flight

4) Unlike other birds, storks do not have a fully developed singing organ, or vocal box, and are generally considered quiet and rarely heard.

5) The largest flying bird is the Albatross. At the same time, the wingspan of the Albatross is the largest, at 3 meters from the top of one wing to the top of the other; This amazing bird arouses fascination and admiration with its size. It weighs up to 20 kg and is about 140 cm long.

When it comes to flying, there is almost no bird that can fly that much. The albatross is so powerful that it can fly several thousand kilometers without a single movement of its wings. Precisely by this way of flying, the albatross stands out from other birds. Albatross doesn’t have to flutter his wings to fly, because he is simply carried by the current of the wind. Besides, the albatross is known for being able to land and take off with extreme ease, but also to make incredible turns during flight. It is a real pleasure to watch this bird fly.

7) The heaviest bird to fly is the Australian Bustard, which weighs from 10 to 18 kilograms.

8) The bird with the longest beak is the Australian Pelican. Its beak is about 50 centimeters long and it makes up a quarter of its entire body length

10) The penguin is the best diver in the bird world. It can dive for 18 minutes at depths of 266 m Penguins can dive to a depth of over 400 m, the largest depth recorded so far is 565 m, Read more about the penguin symbolism.

11) Different species of penguins attract partners in different ways. Royal penguins sing long songs with their partners. Gentoo penguin males give their partners gifts that mostly consist of pebbles or stones. For penguins, a strong love’ bond is extremely important for raising young.

12) King penguins can form nest colonies of up to 10,000 penguins. Each penguin in the colony is at the same and exact distance from its neighbor.

13) Hummingbirds can fly in any direction, left, right, up, down, even backward (they are the only birds that fly backward).

14) The hummingbird is also the smallest bird in the world. Although their body does not weigh more than two grams, they can fly at a speed of 100 km per hour and swing their wings up to 80 times per second.

15) Hummingbird legs only serve as landing gear; he never jumps or walks with them.

Even when it just turns on a twig or moves an inch to the side, it uses its wings!

16) Ostriches are birds of unusual appearance. They can’t fly, but they are real champions in running, as evidenced by their strong legs.

Today, they are the largest, and in many ways the most unique birds in the world. Ostrich’s eggs are the largest bird eggs in the world. Ostrich eggs can weigh from 1 to 2.5 kg, have a length of 16, and a diameter of 12 to 14 cm. However, they usually weigh from 1,000 to 1,200 grams. One average ostrich egg corresponds to the amount of 12 chicken eggs, which is enough to prepare breakfast for one large family. Read more about the ostrich symbolism.

17) Flamingos are pink and orange, but some can be white, black, or even blue. The pink color comes from beta-carotene in crabs and plankton, which are eaten by flamingos.

18) We have all heard of large and cute ostriches, which can grow up to 3 meters in height. If we tell you that small, puffy balls, which weigh no more than 2 to 3 kilograms, and which are called the same as the delicious fruit – kiwi, also members of the ostrich family, will you believe us? These birds, with stunted wings, belong to the group of endemic species that inhabit New Zealand, of which they are also a national symbol.

19) They are rare species of the animal kingdom that we would describe as monogamous. When a kiwi finds its life companion, like a penguin, it can spend its whole life next to it. Scientists who follow and study them record couples who have spent two decades together.

20) The most famous pigeon in World War I was Cher Ami, who worked for the American army as a courier. His exploits include conveying 12 important messages that saved the lost 77th Battalion. The pigeon was wounded in the chest, but still delivered messages. Cher Ami was awarded for his bravery.

21) The most famous pigeon in World War II was G.I. Joe who worked in the American pigeon service in Italy. His most important feat is saving more than 1,000 lives in one Italian village. He flew for a full 20 minutes for more than 30 kilometers to convey the message. The delivery of the message to the allied forces that the British forces had already occupied the village prevented the bombing of the village that was planned. G.I. Joe is honored for bravery too.

22) The famous composer Mozart had a pet, a European starling, who was rumored to be able to sing the first few bars of his piano concerto in G-major.

23) The Roman emperor Julius Caesar trained vultures for battles to kill the homing pigeons of his enemies.

24) When finding food under the bark of a tree, woodpeckers can strike the tree at speeds of up to 25 beats per second; therefore, in one day, this bird can hit the tree almost a million times. Read more about two distinct woodpeckers here: Downy Woodpecker Vs Hairy Woodpecker.

25) Owls are carnivores and eat rodents, small or medium-sized mammals, nocturnal insects, fish, and other birds. After digesting food, they spit out solid debris such as teeth, bones, fur, feathers, and anything else they could not digest.

26) Archaeologists have found owl fossils as old as 58 million years. The largest owl fossil found was almost one meter high.

27) Owls can easily camouflage themselves with their surroundings. For example, the white owl can imitate a perfectly snowy environment with its white feathers, and the forest owl becomes almost invisible in its environment with brown, yellow-dark, and black feathers.

28) The owl’s neck has 14 vertebrae and is twice the size of a human neck. These vertebrae allow her to rotate her neck 270 degrees on both sides. This fact does not disprove the myth that an owl can turn its head in a full circle.

29) Unlike most animals, owls have three eyelids: one for blinking, another for sleeping, and a third for keeping their eyes clean.

30) It has been scientifically proven that a pigeon can recognize people in photographs. No wonder, because over the centuries, man has entrusted them with such important tasks as delivering military secrets, important sports, and financial reports. It is less known that pigeons, in addition to spreading messages in some countries, participated in rescuing injured people at sea.

31) Pigeons are among the most widespread birds in the world. It is estimated that there are about 28 million of them in Europe and that they are mostly distributed in cities. Their survival in urban conditions is explained by the lack of predators and constant access to food. Read more about the pigeon meaning here.

32) Researchers say that geese, ducks, and swans, which spend the winter in the swamps of northern Europe, are changing their migration habits due to rising temperatures. Finnish researchers have found that water birds delay their departure by up to a month compared to the past 30 years.

33) The grip of the eagle is up to 10 Times Stronger than Humans. They can usually lift prey that weighs up to a couple of lbs but the largest types of eagles can lift prey up to around 5lbs.

34) All ducks have highly waterproof feathers. A duck’s feathers are so waterproof that even when the duck dives underwater, the downy underlayer of feathers right next to the skin will stay completely dry.

35) Ravens are one of the smartest animals; when it comes to intelligence, these birds rate up there with chimpanzees and dolphins.

36) Crows go fishing using bait. The American crow is known to catch its own fish, for example, in some cases even using bread or other food as bait to lure fish closer, as captured in the video below.

37) The highest-flying are Eurasian cranes, flying over the Himalayas at altitudes up to 10,000 meters (32,800 feet) — that’s cruising altitude for jetliners!

38) Drunk Robins? Yes, Robins sometimes will flock to fermented berries. By ingesting large quantities, they appear to be drunk and exhibit behaviors such as falling over while walking.

40) Hawk species are known for their speed, particularly when chasing prey. During the hunt, some species of hawks can dive 240 kilometers (150 miles) per hour through the air.

41) The color pink of the Flamingos feathers comes from beta-carotene in the crustaceans and plankton that flamingos eat. Zoo flamingos will turn white if their diet is not supplemented with live shrimp or flamingo chow containing carotenoid pigments.

42) Baldness sometimes strikes cardinals! Late in the summer, don’t be alarmed if you catch sight of a bald cardinal. Chances are, it’s a sign they’re in the midst of a late summer molt. Like other songbirds, they’re just shedding those old, worn feathers to make room for a fresh set. Cardinals just happen to lose all their head feathers at one time!