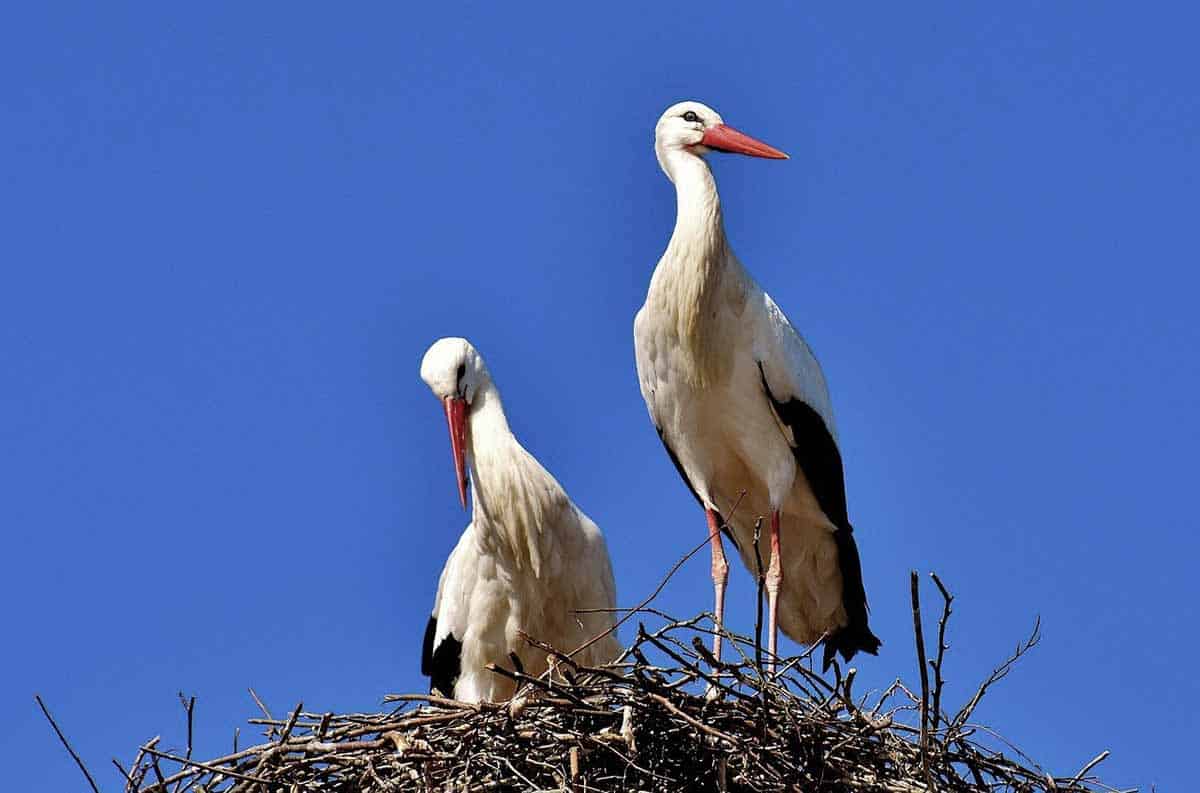 Baby Carrier: Understanding The Meaning Behind The Stork’s Epic Tale

Popularly recognized to bring babies to their mothers, storks usually thrive near bodies of water where they wade through to catch small animals like fish, crabs, and frogs for dinner. Known to build spacious and sturdy nests in high places where they settle for many years, these typically huge birds can be spotted soaring and gliding during a hunt, using their distinctly large wings that can impressively stretch to at least 10.5 feet. Greatly associated with several fables and folktales, let’s smoothly glide into a better understanding of the storied stork symbolism.

Symbolic Meaning Of A Stork Bird

As powerful symbols of birth and new life, these birds of often white plumage and black feathers have been identified with babies and families for centuries. Their affinity to building their nests atop chimneys, perhaps more for its height and the warmth they bring, have been read by many as a symbol of our thoughts passing through a funnel and carefully being led by our spirit guides. As a representation of our perceptions and prayers, the rising smoke is met by the stork and subsequently directed to the realm beyond.

Being able to walk on land, wade on water, and take flight allows these symbolically adept creatures to take on the symbolism of all birds, making them a powerful representation of our Higher spirit. Regarded as our passport to the spirit world, it somehow embodies our immortality for it is these far greater beings that come and guide us when we go through near-death experiences. By providing us with a set of functions, our Higher spirits define our spirituality, making our divine presence lasting and perpetual.

Delicate and meticulous, these remarkable birds place their nests away from the dangerous and prying eyes of predators such as snakes, big cats, and humans. This clearly shows that apart from being a potent symbol of life and birth, storks also represent protection and motherhood, explaining perhaps the connection between this awesome bird, babies, and mothers. While the Greeks see this diurnal and non-territorial bird as a symbol of a mother’s love, particularly for its younger babies, Germans further demonstrate this bird’s particular characteristic through a classic tale. Legend has it that when a German woman nursed a wounded stork back to health, the bird showed its gratitude by giving her a lightning stone, in which during that time was a known symbol of a seed or an egg – both closely associated with motherhood and birth.

Known to be highly sociable creatures, the stork’s fondness of using maple leaves as a lining for their nests has made the bird and the leaf indications of love and the coming of a new child in the home. As the favored flying creature of the Greek goddess Hera and her Roman counterpart Juno, these carnivorous birds are an embodiment of safety, protection, and the constant warmth that we feel and long for whenever we are at home. Using their huge and imposing wings, they scare off potential predators from even thinking of getting near their chicks. Largely established as monogamous, they stick to one mate over their lifetime, making them excellent symbols of trust, loyalty, and fidelity.

Believing that these birds can grow to a ripe old age, Chinese wisdom interprets the image of being in the presence of this bird as a symbol of long life and prosperity. The stork’s practice of diving into the waters and coming out with a mouthful of fish symbolizes prosperity and good luck in most Asian cultures, wherein its search beneath the water’s surface results in the finding and uncovering of hidden treasures.

A natural at catching snakes for their meal, storks are known to represent purification, not only because of their typical white feathers but also because snakes and serpents are considered as the manifestation of the devil. Since storks consider such slithering creatures as an appetizing course for their meals, eating and getting rid of the snake is akin to redeeming the world from sin.

Brimming with symbolism, the stork comes into our lives often bearing messages such as renewal, rebirth, and the coming of a new life. Serving as our reminder to reinforce the safety of our community and our homes, this fascinating bird asks us to remain respectful, particularly of our elders and ancestors, for it is through their wisdom and teachings that we become well-round human beings.

Bearing offerings of spiritual beginnings, storks have long been a powerful symbol of life and rebirth which greatly associates them with newborns. Considered a source of life, these somewhat intimidating creatures offer fresh spiritual beginnings as well as guidance as we go through particular stages of growth. As a spirit animal, they are known to carry the wisdom of a Higher Spirit that encourages you to enjoy life at its purest. By allowing the stork to lead you through a process of purification, you learn to relish and appreciate life’s simple joys.

Highly revered for their unique ability to exist in silence, this marvelous bird does not screech, coo, or squawk, setting them apart from their peers. Using such means of communication as bill clapping and body gestures, the stork spirit animal teaches us about communicating through symbols, allowing us to better understand the meaning of our dreams, visions, and perceptions. Their capacity to live close to humans highlights their adaptability, which in turn teaches us about the importance of being able to adjust to a range of situations.

The stork’s habit of migrating in spring shows how much this spirit animal values nature, serving as our constant reminder about the importance of taking care of the environment and that a healthy planet is a fortune in itself. Spending most of its time in the water in search of food, at times even plodding in the mud, signifies the struggles that you sometimes need to go through for the realization of your dreams. Having the stork spirit animal by your side, you are assured of a strong spiritual presence that will make certain that you can surely, albeit slowly, walk through these struggles.

With the guidance of the stork, you will eventually achieve those that you long for, making your troubles and challenges an essential part of your spiritual progress. This incredible bird teaches you to be courageous and to believe that the lessons of even the most stressful situations could be used to lift you to a place of better spiritual understanding. As protective as it is with its eggs and its young, ensuring that the nest it builds offers sufficient security for its family, the stork spirit animal signifies the amount of importance that you give for the safety and protection of your home.

Typically observed to breed in spring, the more aloof and solitary black stork builds nests on trees or cliff ledges, while making sure that they are always in the vicinity of a body of water. Performing less elaborate flight displays during their entertaining courtship rituals, this extremely rare stork species makes faster wing beats to prepare themselves for flight. Able to produce various whistling sounds, this more striking but less vibrant game is an indication of a new life according to European folk legends. These giant birds of particularly dark plumage are known to be symbols of new beginnings, whether spiritually or physically, that is about to take place in your life.

Although less attractive compared to their light-colored plumage peers, these birds carry new ideas that inspire and encourage you to take on new ventures. While they are still physically massive and intimidating, the black stork’s spiritual value remains positive and uplifting. As fierce guardians and defenders of their nests against predators, these dark-feathered creatures are great representations of creativity, endurance, and provision.

A Stork Is A Bird That Delivers Babies

Widely recognized as messengers from heaven, birds are often employed by the gods to deliver important life-altering information. As the story that we usually tell kids when they ask where babies come from, the image of an almost gigantic, long-legged white bird carrying a newborn baby bundled in white cloth and on its way to deliver the child to its excited parents persistently pops out. Going all the way back to Ancient Greece, the story tells of Hera, the Queen of the Gods, growing jealous of a mortal queen named Gerena for she was described by many as a woman of flawless beauty. Rumors of an affair between Hera’s husband Zeus and Gerena moved the goddess to turn the beautiful queen into a long-necked stork. Unwilling to leave her newborn child believed to have been fathered by Zeus, she picked up the infant, safely wrapped him in a blanket, and flew off with the baby hanging off her beak.

While this may be the origin of that amazing story, the idea of storks delivering babies becoming widespread has inspired various versions, in which some are science-based rather than fiction. In Pagan Europe, most couples get married on the day of the Summer Solstice to honor the sun, prosperity, and fertility. Since storks were believed to coincidentally migrate at about the same time, returning nine months later just when honeymoon babies were due to arrive, the belief towards the myth and its popularity became not just more prevalent but believable.

By providing an alternative story on how babies came to be, it is only fitting that storks would symbolize birth and new beginnings. Being practically voiceless, communicating only through gestures, rapid wing flaps, and dances, breaking down the fabled stork symbolism is hands down epic.