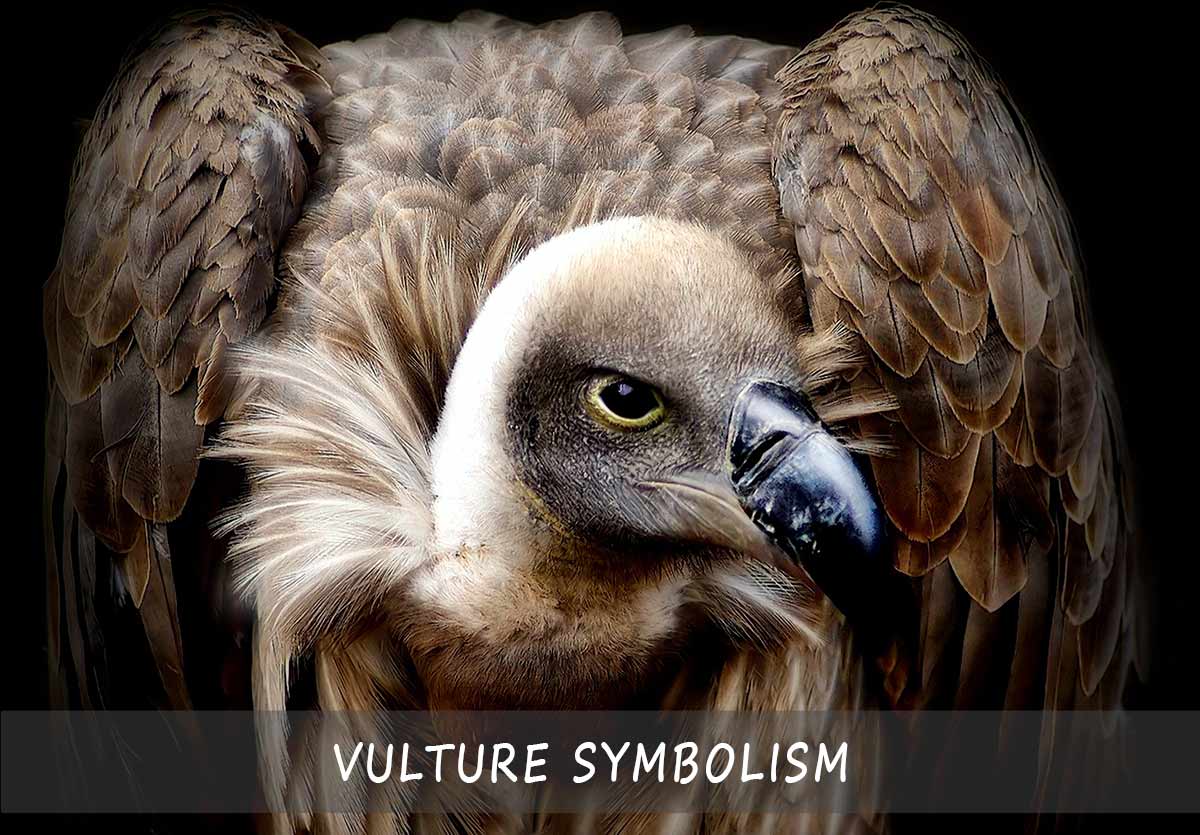 Vultures are scavengers, feeding on dead animals. They are often seen circling high above the ground looking for a meal. Vultures have been known to carry diseases and bacteria that they pick up from their food sources such as botulism and necrotizing fasciitis (flesh-eating bacteria). The bird’s bald head is not due to old age or disease (and it the only bird with a bald head); it actually helps keep them cool while in flight by reflecting sunlight away from their eyes. This blog post will discuss what vulture meaning and symbolism means, including what you need to know about these fascinating creatures!

Vultures are the most righteous of birds: they do not attack even the smallest living creature.

Birds of any sort, shape, or form are an integral part of our ecosystem. From the mid-level consumers like the goose, cockatoo, and parrot to the top predators such as eagles, falcons, and buzzards, they help maintain the population level of their species, providing critical resources as scavengers and decomposers. Known as one of the more popular predatory birds and as the sanitation committee of the wilds, vultures prey on the sick and dying animals and are often seen feasting on carcasses saving all of us from the rot and smell. With a role that typically casts them as intimidating and troublesome, let’s take a close look at this unloved bird and vulture symbolism in particular.

Vultures Pee on Themselves

Notorious for peeing on themselves as a means to cool off and to remove the bacteria from their food, these ominous looking birds can grow to about 3 feet and weigh around 8 pounds and they possess wide and strong wings that they use to glide and circle their prey for hours. Their bald heads are perceived to be as such so they can keep themselves looking clean while partaking of rotten meat while a cast iron immune system keeps them well even after devouring a great number of spoiled eats. Needless to say, like many birds are geniuses, so are the vultures.

Recognized as prominent survivors, vultures radiate endurance and durability. They are often perceived in movies and television as a huge bird that quietly sits atop a branch, strategically planning and waiting for their turn on a downed animal. In this case, vultures are a symbol of patience instigating you to stay on your path as you carefully plan your next steps towards your goal. The presence of these meek winged creatures invites us to take our time before making decisions that can otherwise alter our lives in big ways.

Vulture symbolism serves as a reminder that we should have faith in each of our senses as we navigate through the most difficult circumstances and how we can transform these predicaments into situations that are highly beneficial to us. They are a symbol of reassurance to trust in the gifts that were given to us by higher beings to overcome tests that are occasionally thrown on our track.

Vultures symbolize birth and death, with both presenting as an indication of a new beginning. It represents positivity each time it makes its presence known to you, encouraging you to shun the negative and focus on the positive of the situation in front of you. When it appears, it invites us to look and listen carefully as it will open us to insights on what might happen in the near future.

Vultures as animal totems represent the patience and positivity that we need to overcome life’s shortcomings. As vultures utilize our planet’s energy to ride the wind and soar high, they teach us to carefully think everything over and use the calm to our advantage before swooping down to take action. As spiritual guides, they serve as reminders that our difficulties are all temporary and are required for us to gain and understand a greater purpose.

They radiate a sense of community as they are known to not mind sharing their catch with other vultures. Their unmatched resourcefulness and intelligence allow them to find the perfect spot to score the perfect meal. Such attributes are what the vulture wishes for us to emulate since these same virtues can lead us to an enlightened life.

People with the vulture as their spirit animal know how to use their energy efficiently. They show incomparable amounts of patience, simply riding the wave of those around them while remaining passionately protective of those who are most dear. This spirit animal provides us with a good grasp and keen awareness of most situations, allowing us firm control of every circumstance.

Vultures provide us with the wisdom to know when to grab hold tight and when to finally let go, displaying the need for greater awareness and sensitivity towards those around us. This unique trait makes persistence and deep comprehension extremely essential as this spirit animal circles mid-air with patience as its most potent weapon in the arsenal.

The Vulture in Different Cultures

Vultures are seen in different parts in a variety of ways. While some recognize their importance, they are highly recognized as a symbol of greed, sloth, and filth. They are closely associated with war, death and, decaying flesh, seriously affecting their integrity including our views and appreciation towards them.

Their ability to rid the people of ancient Egypt of their carrion, as well as their connection to mother goddesses and maternity, earned them a high place of honour during this period. Egypt’s hot climate may have contributed to this since flesh rots quickly, deeming their uncanny ability to withstand such an ordeal important to the Egyptians’ health. Vultures were valued in Egypt as spirit guides that serve as a connection between life and the underworld and were believed to carry off all that might contaminate their land and to clean their nation of everything impure and rotten.

The Greeks thought that vultures bask in filth and foul smells. They believed that these birds cannot survive flesh that was thoroughly anointed with perfume and that they themselves dislike their smell, explaining the frequent sunbathing behavior to air away from the odor. As a spirit guide, the ancient Greeks saw them draw powers to predict death and slaughter as they often appear in places where battles happen. Philosophers saw them as spirit guides that provoke people to take advantage of the weaknesses of others, savagely desecrating whomever they set their sight on.

The taboo surrounding these foreboding creatures is evident in the early Christians, as vultures were considered as bad omens that bring destruction, punishment, and sin. They are revered through their keen eyesight and presumed to announce the coming of the Messiah.

These cultures share the varying ways that we see the vulture, particularly its role in life and death. Its importance signifies the need to grasp the symbolism that vultures offer to further reconcile us to their role as spirit guides.

In Africa, vulture meaning and symbolism is primarily seen in the Aka culture. The people of this tribe believe that death should not be feared, but instead embraced as a part of life. Vultures are viewed as messengers from the afterlife who bring joy to loved ones by delivering their souls back home.

In Asian cultures, vultures represent death. They are seen as messengers of karma and omen of impending doom.

In Hindu mythology, Garuda is the king of birds and rides on a vulture named Jatayu in order to rescue his mother from imprisonment by Ravana (the demon-king). In some stories, he carries Brahma’s message for humans who break their dharma obligations or commit sins against nature: “vāñchati mam īśa pāpmani bhūtani na kariṣyati” meaning “O Lord! Thou art not pleased with any evil deed done by men.”

In ancient Egypt, the goddess Wadjet was often drawn with wings and the body of a hawk but she had the face of a woman wearing the protective uraeus (cobra). She is represented as one-winged solar disk on top of another to represent her role during creation when she would fly high in order for Ra’s light to pass over Earth and bring life. In this position, Wadjet could be seen as both sun god Horus’ mother and wife because he emerged from her egg after it dropped into Khepri’s hands before being laid back down by Isis who raised him while his father Osiris ruled below ground. When an Egyptian person died they were mummified so their souls could go meet up with

In Chinese culture, vultures are seen as a symbol of death. The bird was thought to be the only creature that could see both heaven and earth so it was an omen for those who were about to die. For this reason, they would often carve images of them on their tombs in order to do their part in the journey from life to death.

They encourage us to choose paths that uphold our higher consciousness and understanding, a course that fills our hearts with joy and contentment. This bird spiritually stimulates you to dig deep into your past experiences to face present challenges and difficulties from a different angle. Their presence is an affirmation that provides you with the courage and strength to freely choose your path while being flexible to the trials and woes that may arise as you move forward.

A vulture is a very powerful spiritual guide as it offers a deep connection with the love of the Mother goddess, opportunities to grab onto new visions, and most importantly, utmost protection.

Don’t play dead with a vulture. That’s exactly what they want.

The vulture is a scavenger bird that feeds on dead animals. It generally has an ominous meaning in dreams, often indicating impending death or destruction of some type. This may be related to how the ancient Egyptians believed the wingspan of vultures was equal to the distance from earth to heaven and outstretched its two arms as far as possible, representing Osiris’s span over all creation when he ruled in his kingdom before being killed by Seth (god of disorder).

When dreaming of vultures, it is common to see them in a negative light. The scavengers are seen as harbingers of death – usually, the person who will die soonest or at least an intimate acquaintance or close relative. Vulture dreams can also represent painful emotions such as guilt for not helping enough during someone’s time of need and being unable to face one’s own mortality

The meaning behind that flock circling high overhead could be interpreted several different ways depending on your situation; you may just want some alone time which is represented by their solitary nature, they might be reminding us about the unpredictability of life with how often they feed off carrion, or maybe there is something going on up above we cannot see.

Is Seeing a Vulture a Bad Omen?

The origins of this superstition are not clear, but some speculate that seeing a vulture is an ill omen because they represent death. Others say it has to do with their diet – feeding on dead animals and carcasses. Seeing a single vulture could mean someone will die soon; if you see two or more together, the group may signify impending death for many people in your community.

Top 3 Points to Use the Vulture Symbol in Your Life

The Vulture Symbolism represents purification and rebirth. Contrary to its image, its unparalleled positivity provides us with the energy to soar high in search of the good things in life. This bird as a spirit guide serves as a constant reminder to patiently and calmly weigh everything before swooping down for the kill.

[Video] Vultures – Photographing the Antiheroes of Our Ecosystems