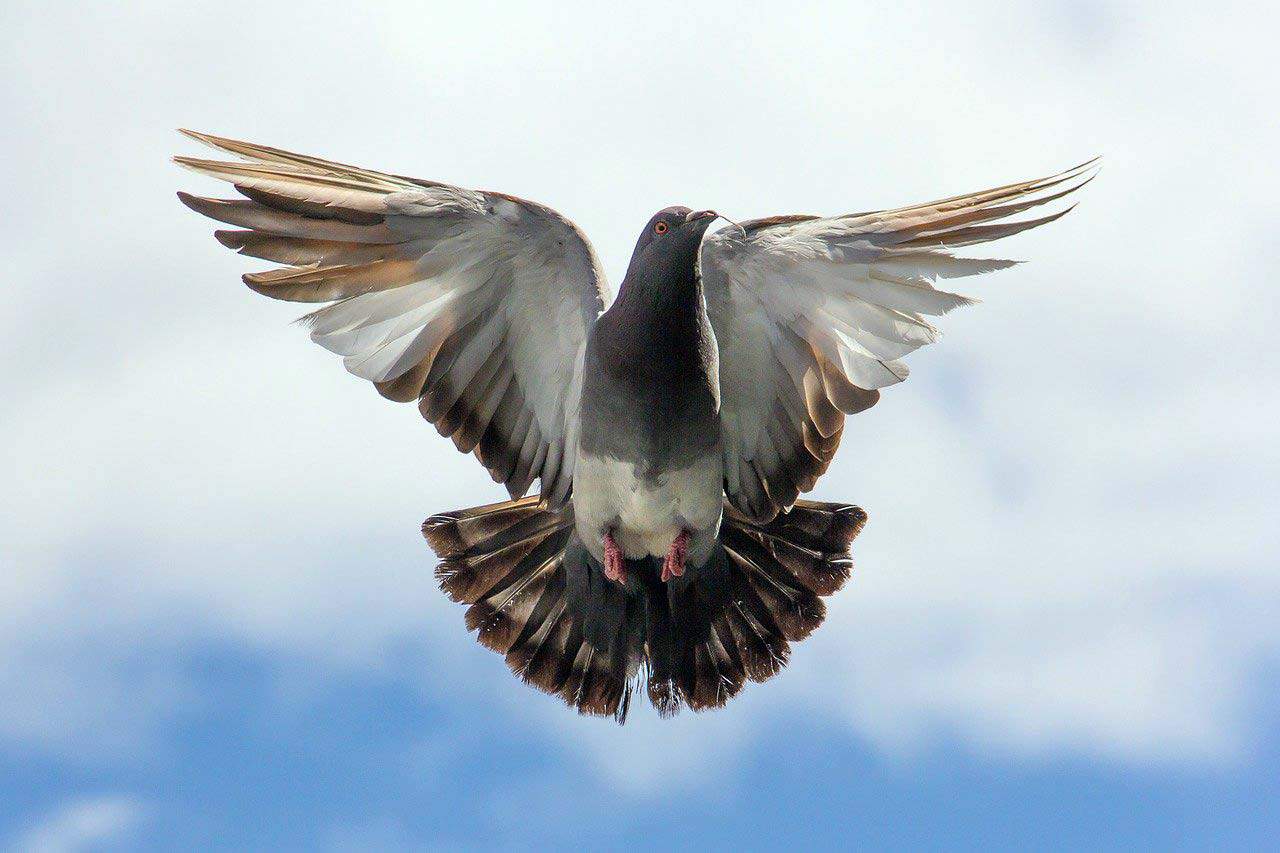 Despite being referred to as “flying rats” due to their unhygienic and messy nature, pigeons are more complex and intelligent than most of us realize. As one of the first birds tamed by man, these awesome creatures have lived in our company for centuries. Their speed and inclination have allowed them to thrive, even displaying their natural acumen by performing tasks such as reading, delivering critical messages, and an awareness of the concept of space and time. Pigeons have played a major role in human history and symbolism. They were even used to carry messages during World War I!

Much like rats, these incredible creatures are everywhere. But the next time you see them, it would be nice to give these birds a little bit of feed and respect for you to understand the fascinating pigeon symbolism.

What Do Pigeons Symbolize?

One of the more remarkable traits of pigeons is their immense ability to adapt. Their capacity to easily adjust to their environment allows them to flourish anywhere in the world. Pigeons are a symbol of strength and flexibility. Their presence serves as our guide in overcoming the most difficult of odds, providing clout to survive even in foreign terrains and at times, even in the harshest of conditions.

These powerful creatures equip us with all the weapons that will allow us to shine even when placed in the most difficult and challenging situations. Pigeons do not only signify survival and that your chance of doing so is far better than those of your peers. They are also a symbol of victory, reminding us that in the end, through all the hardships and adversity, you will come out unscathed.

There may be times when many would underestimate your capabilities, thinking that you are not strong or talented enough to make a difference. After all, pigeons are not the most dominating creatures in the sky, even seen as complacent and timid. However, it does not necessarily prove your weakness. Instead, it is a representation of the inner strength you possess that only a few people know. That behind an easy-going and calm personality is vigor and determination and that yielding in front of the greatest obstacles is never an option.

Known to be highly social creatures, pigeons are often seen performing graceful and captivating aerial displays with their flock. This implies that the pigeon symbolizes your impeccable social skills and that you are a person who does not shy away from conversations. It is an indication of your ease to fit in any social circle and your willingness to mingle even with people you are not familiar with. In addition, pigeons portend that you don’t have trouble communicating and expressing yourself, promoting your innate ability to befriend and attract.

Pigeons are extremely fertile animals, raising a number of broods each year. They are also known to mate for life, making them an appropriate symbol for any marriage ceremony. White pigeons symbolize peace, love, and honor, all of which are essential characteristics of a happy and prosperous marriage (check the white owl meaning in contrast).

Although some see a solitary white pigeon sitting on a chimney as a symbol of death, it is also believed to be a symbol of the Holy Spirit and the Virgin Mary in Christianity. White pigeons are also used in politics as a symbol of peace, often contrary to war and violence. Setting them free during a funeral represents the flying off of the deceased soul or spirit to the next life. Four white pigeons symbolize the Holy Trinity as they lead the departed into the heavens, while ten or more are manifestations of angels who will travel with the spirit to his final destination.

Often depicted as gentle and pure, white pigeons are also known as symbols of loyalty, happiness, prosperity, birth, and new beginnings wherein their release has long been related to celebrations, rituals, and ceremonies.

As a spirit animal, pigeons have become a representation of many good things. Their most common interpretation links them to peace, love, piety, beatitude, and harmony. Pigeons have always been believed to bring good fortune. They are also believed to be messengers of tranquillity and peace. They are associated with kindness, forgiveness, and mercy and are used as literary or artistic motifs. Here are a few representations of the pigeon as a spirit animal.

Pigeons are among the most affable birds in the world. They do not cause harm to other animals as well as the environment they dwell in. Folks that employ this bird as their spirit animal are regarded as warm-hearted, and as people who easily extend kindness and help. Pigeons are not selective as they lend a hand even to those they don’t get along with, often disregarding boundaries and differences to spread charity and righteousness.

As simple and uncomplicated as they look, pigeons are difficult to mislead. They remain aware of their surroundings way better than most creatures within their vicinity. This trait allows them to see past other people’s intentions which makes catching them off-guard impossible. Shrewd and intuitive, identifying a person who is going through stress, anxiety, and sadness is not a problem, enabling you to show kindness and compassion.

One characteristic that makes pigeons a welcome animal spirit is an attitude that just won’t quit. Even through difficult tasks that are beyond their capacity, these birds never give up. The commitment of this animal guide never grows weak. Alongside a strong and wilful determination, pigeons remain unyielding even in the face of great adversity.

The strong sense of devotion that pigeons display makes them perfect life partners. A person guided by this spirit animal will remain dependable and trustworthy no matter what. Pigeons take on the responsibility of bringing compassion to others, delivering excellence in everything that they do as well as carrying out sensible actions in order to keep a person’s trust.

The symbolism associated with pigeons as a spirit animal indicates the goodness of a person and his ability to be loving and kind. These birds, as unappealing as they are to some, are beautiful spirit animals that may help find your true life mission and purpose.

Pigeon As A Totem

Pigeons represent love which makes people with this bird as an animal totem loving and kind with a good grasp of life and the problems that others might have. They are also a manifestation of sacrifice, making those born under this totem greatly committed to their goals and their loved ones, often willing to go to extremes to ensure their happiness and the fulfillment of their dreams.

These birds are a representation of being strong-willed, serving as guides for you to not be disturbed easily and to lead harmonious and peaceful lives around the most significant people in your life. Such disturbances tend to overwhelm us, questioning the very firmness of our stability. As your totem, pigeons provide calm and a sense of stillness that allows you to remain positive through any form of predicament.

Also, pigeons are known to be highly perceptive birds and as an animal totem, they’ll share with you this trait, allowing you to easily adapt to various social groups and life situations. It also provides you with a better understanding of things that are happening around them, advancing one’s awareness and versatility.

Poems like to have a destination for their flight. They are homing pigeons.

The Symbolism of the Pigeon in Different Cultures

Traditionally, the occult claim that a pigeon’s coo is a depiction of mourning that reflects hidden sorrowful emotions. Some cultures believe that the appearance of a pigeon indicates the need for us to examine our lives, particularly our relationships at home, to better assess the severity of the situation.

Pigeons have become symbols of many good things. As such, they are now present in a handful of traditions, religions, and cultures. They have been closely identified with a range of concepts and ideas, each with varying interpretations.

Birds are generally seen as a symbol of freedom and pigeons are no exception. They embody the most brilliant and natural idea of forgiveness, serenity, and well-being, going beyond the boundaries of the greatest civilizations.

What Does It Mean When A Pigeon Comes To You?

When pigeons allow their presence to be known by you, it may be a sign of a divine message that is coming your way soon. It is heeding your undivided attention and is expecting you to deliver and share this information with great enthusiasm. Simply allow the message to convey naturally and let the heavens communicate through you. Knowing that the sounds pigeons make are quite faint, hearing them is a symbolic message that is asking you to observe and prepare since, for you to have a firm grasp of the pigeon’s message, you need to keep a receptive mind and an open heart.

Meaning of Pigeons in Dreams

In dreams, the presence of a pigeon symbolizes that you are open to new opportunities. Pigeons represent self-confidence and creative thinking in your waking life. They also represent intelligence and integrity. You can use these qualities or try out new things!

A dream about pigeons suggests that you should be optimistic about what will come next in your career or personal life. Maybe it is time for a change? Think outside of the box with this bird by using its symbolism as an inspiration!

A pigeon tattoo can symbolize a variety of things. It can represent innocence, peace, and love because the pigeon is often associated with these ideals. Pigeons are also historically used to carry messages for humans, so they might be connected to communication or other types of work that require hard work but little recognition (such as being an office worker). The simple design makes them perfect tattoo designs for first-timers who want something small for their backs or sides.

Contrary to popular belief, pigeons are not male doves. They are a symbol of love, peace, and harmony, often bringing hope to the discouraged. Despite being reviled for generations, the pigeon has proven over time that they are more than just scorned and dirty pests.

The purpose of the pigeon is a symbol for peace. This bird brings hope and protection to people who need it most, such as those in war-torn countries or natural disaster zones. Pigeons are also used by police forces all over the world because they can fly at great speeds and carry messages quickly during emergencies. They have been known to be “civilian heroes” that helped save lives after terrorist attacks on September 11th 2001 when their warning cries alerted firefighters before more buildings fell down. These birds may not always bring us joy but they do make our world better one day at a time! What other ways might pigeons be making your life easier?

Click to read about the dead pigeon meaning or the pigeon feather meaning.

1 thought on “Pigeon Symbolism: The Meaning and History Behind the Bird”