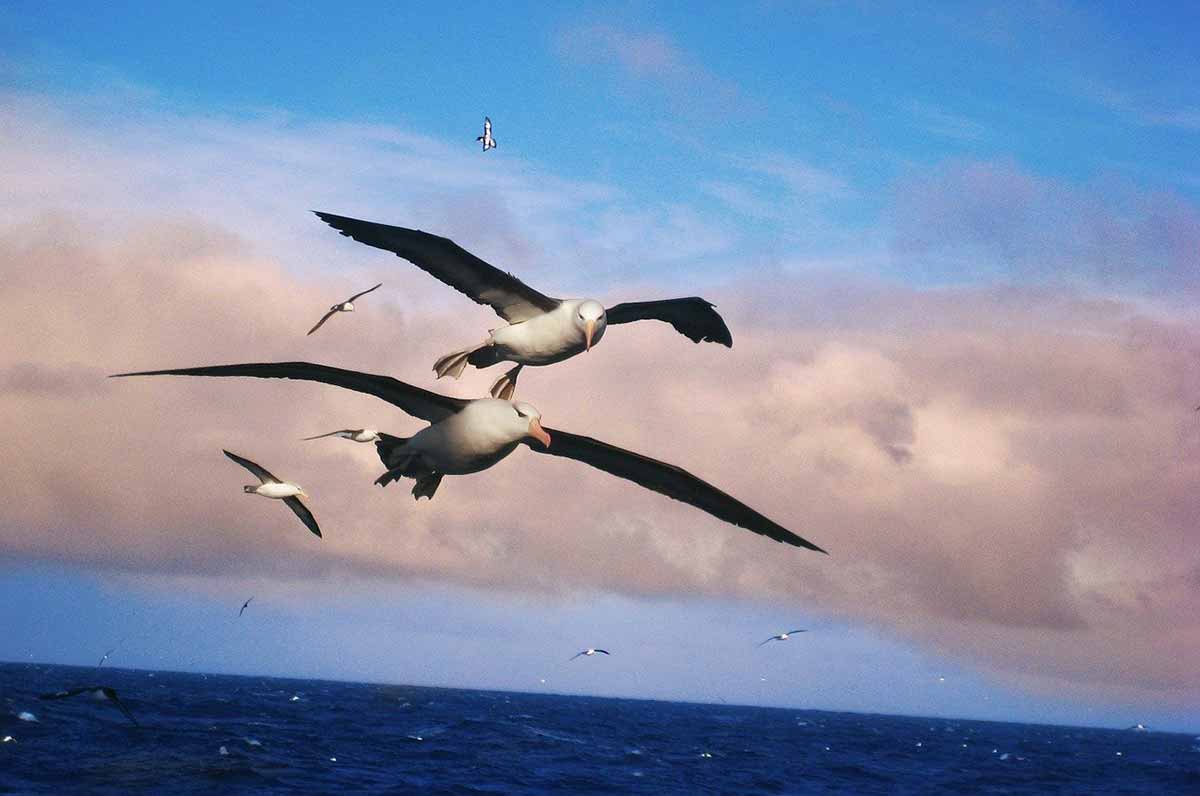 And The Tall Tale Behind These Towering Birds

The Albatross is a mythical creature that symbolizes many things. It’s most common interpretation is death, but it also means fortune and good luck in some cultures. In this blog post, we will discuss the meaning of the albatross and its symbolism for us all.

Known to spend much of their time soaring in the skies, the albatross is among the largest of flying birds. Using their large, strong, and sharp bills that are made of (giggles aside) horny plates, they are often spotted swooping down towards the sea to catch their meal of fish, squid, or krill. Unlike other sea birds, their strong legs enable them to walk well on land, allowing these towering birds that can grow up to 4 and a half feet to effortlessly come ashore and build their nests. With an impressive wingspan that can at times stretch as wide as 12 feet, their unique ability to take flight and to thrive on land has got many people from various cultures wondering about the albatross symbolism.

What Does The Albatross Symbolize?

While birdwatchers in the Southern and the Northern Pacific Ocean region can spot these huge elusive birds on a more regular basis, their fossils have also been found in the North Atlantic, which is a good distance of more than 10,000 kilometers. Such a tremendous range explains the varying interpretations about what these birds actually symbolize, shrouding these otherwise magnificent creatures in mystery and mystique.

Regarded as one of literature’s most celebrated symbols, the albatross’s affinity with the sea has made them a representation of mild and favorable weather. Sailors and sea dwellers of the past found its presence highly useful at a time when apps such as Accuweather had yet to exist. Since harming or killing them was considered to be a foolproof way of bringing bad luck to any voyage, seafarers of the past steered clear of these majestic birds, trusting that by doing so, the albatross would quiet the seas and guide them as they sail home.

Surrounded by folk tales and myth, these colossal birds belong to a group called Diomedea, associating them to the Greek legend where the companions of Diomedes were transformed into gigantic birds. This story might have inspired the belief that the albatross serves as the protector of the seas since they would often be seen flying alongside ships that are sailing through rough waters.

In western culture, an Albatross was considered to be a bad omen – attributed mainly because they were often seen following ships who then met with disaster or misfortune within hours of seeing one of these creatures fly overhead.” This superstition likely came from sailors who had been at sea for months on end without sight of land when suddenly spotting such a large-winged bird during their watchful duties at night might have seemed like divine intervention to them.

I might enjoy being an albatross, being able to glide for days and daydream for hundreds of miles along the thermals. And then being able to hang like an affliction round some people’s necks.

In ancient times, the word “albatross” was translated as a physical burden that makes you feel as if you were cursed. This bird’s amazing ability to glide through the air a few inches above the water using its large wings is believed to have the capacity to enhance our knowledge about love and our emotions. Revered as a symbol of good fortune to sailors, the albatross would often show its presence whenever giant waves would put ships in great trouble.

They are known to have the ability to send messages across both the earthly and spiritual realms, often appearing on days when it is extremely foggy, giving mariners and those lucky enough to have seen these shy and mysterious birds the belief that they are our connection to the spirit world.

As a spirit animal, an albatross is referred to as a symbol of grace, faithfulness (here check the swan symbolism as well), and loyalty. They are often attributed to positive traits such as independence, being calm and open-minded, as well as endurance and success. Highly revered as the king of ocean waves, it is known to provide us with an understanding of the various and constantly evolving human emotions, as the ocean is believed to spiritually represent the soul. Due to its vast knowledge of the ocean’s tides, the albatross possesses great wisdom of the wind, giving this awesome bird the flexibility to glide through our never-ending changes in our beliefs and our perpetual mood swings (also check out the similarities to the seagull symbolism).

The albatross’s ability to travel far and wide represents this bird’s capacity to spiritually teach us how to properly handle our emotions. As it soars in the sky, it shows how wonderful an air element it truly is and that by having this bird as your animal spirit, you gain the amazing gift of spiritual freedom. Through this, not only will the albatross serve as your guide but also a spirit animal that teaches you to have control of your thoughts that may lead to mental and spiritual harmony.

By having a connection with both spirit elements of air and the earth, the albatross displays kindness and faithfulness particularly to people most dear to them. Coming into your life as a spirit guide, these gorgeous birds teach you how to achieve balance in both your body and mind, as well as the grace to move freely despite all the many challenges in life. This allows you to uncover certain paths that will benefit you both physically and spiritually.

The Albatross Symbolism in Different Cultures

For Native Americans, the albatross symbolizes many things. It represents peace, unity, and good luck in some cultures. In others, it means death and mourning for loved ones.

Hawaiians believe that when an albatross appears on land or water near someone’s house, they are being given a message from their ancestors to take care of something important involving family issues or any relationship with one’s origination place.

In Christian Culture the Albatross is a symbol of Christ’s Passion. The albatross was used by the ancient Romans as an execution device, but in Christianity it is more often associated with the crucifixion and resurrection of Jesus.

In “The Rime Of The Ancient Mariner”, Samuel Taylor Coleridge uses this symbolism for his poem about being haunted by a vengeful Albatross after killing one on board a ship without cause. It also can be seen in paintings like Gustave Doré’s illustration of “Jesus Walking On Water” from 1869 where two birds are circling around him to show his divinity while he moves across the water just above their heads.

In Asia, the Albatross is seen as a good luck sign. In some countries, Albatross are considered symbols of wealth and prosperity because they only return to land for breeding or molting; the rest of their life is spent in the sky.

Albatross in Japanese culture represent long-lasting love. From ancient times these birds were used as wedding gifts with messages that symbolized “a thousand years” but today it has changed to representing everlasting happiness and perfect marital bliss.

Chinese people say an albatross represents someone who is very lucky and prosperous because this bird was thought to live on clouds without any need for earthly food sources like other earthbound animals so it could not be hunted by humans or die from famine or disease, which also made them symbolic of longevity

The Albatross As A Metaphor

Most people would say that an albatross actually suggests a person carrying an enormous emotional burden or a weight around their neck. Considered by water enthusiasts as a mariner’s friend, this bird represents good luck for navigators, and hurting or killing one can be extremely detrimental to your journey. Here are some of the most interesting albatross metaphors:

Regarded as the Prince of Waves because of its ability to know where to move and to predict the weather, they serve as our guide as we go through life’s numerous stormy seas. These fascinating birds teach us to stay calm even when we’re under constant duress, establishing our elegance by not getting affected by your storm’s strong and destructive winds. For sophistication also check the Crane symbolism.

Because of their capacity to travel great distances at breakneck speeds, the albatross has become a popular symbol of opportunity and independence. By covering thousands of miles in just a few days, they are widely seen as a representation of a life without any limitations.

Albatross Around The Neck Meaning

Derived from a 19th-century poem where a sailor shoots and kills the bird, an albatross around the neck indicates a heavy burden upon one’s shoulder. Since seafarers believe that harming these mystical birds can undoubtedly bring bad luck, it is interpreted as an affliction of such gravity that it significantly induces a great deal of guilt. As we tend to use simpler terms such as stress, anxiety, hassle, and tension, this idiom is rarely used in everyday conversation.However, for the more native speakers, these words mean much more than it seems.

Christians have meddled with the idea of having an albatross wrapped around one’s neck as a spiritual representation of Jesus Christ’s march towards Cavalry, believing that the challenges and difficulties we interpret as having an albatross around our necks are largely similar to the adversity that the Son of God faced during His passion. Much like Jesus, when he told the Father that He was ready to accept his fate, it is only when we accept our shortcomings and vow to completely change our ways that we get to finally rid ourselves of our heavy burden.

The Ancient Mariner And The Albatross

The relevance of the old poem “The Rime of the Ancient Mariner” indicates the numerous teachings that were intricately hidden within. The story takes us back to a cold and remote location near Antarctica, where the characters encountered superstitious imagery that concluded with life lessons presented through the image of an albatross.

The poem tells the story of an old man of the sea who blamed the mystical powers of the albatross as the one that brought the excessive amount of fog that was making their voyage particularly difficult. Little did he know that it was the same bird responsible for the strong winds that were filling the ship’s sails with the breeze that was pushing his vessel towards its destination. Out of frustration, he killed the albatross believing that it might alter their luck.

True to his word, their luck did change as the winds stopped, stalling his ship and breaking his crew’s spirits. As plagues afflicted the vessel, the sailors turned on the ancient mariner and forced him to wear the massive slain bird around his neck. It was only after the old sailor changed his ways and started showing more respect towards all the living creatures around him that their luck as a crew changed for the better. The poem, still read across the countries even after many centuries, stands as a reminder that our every action, no matter how small, may provoke unintended consequences to our environment and that it is best to respect and care for all the living, may it be human or otherwise.

Meaning of the Albatross in Dreams

When you dream about an albatross, consider the following meanings:

As our spirit guide, the albatross encourages us to be loyal as well as independent. Although this animal spirit’s affinity to freedom might make it a challenge for us to honor commitments, the sincere loyalty that this bird shares will show how much people can put their trust in us. Add to that an innate kindness and calm, then it wouldn’t be that bad to have the albatross as your spirit animal.