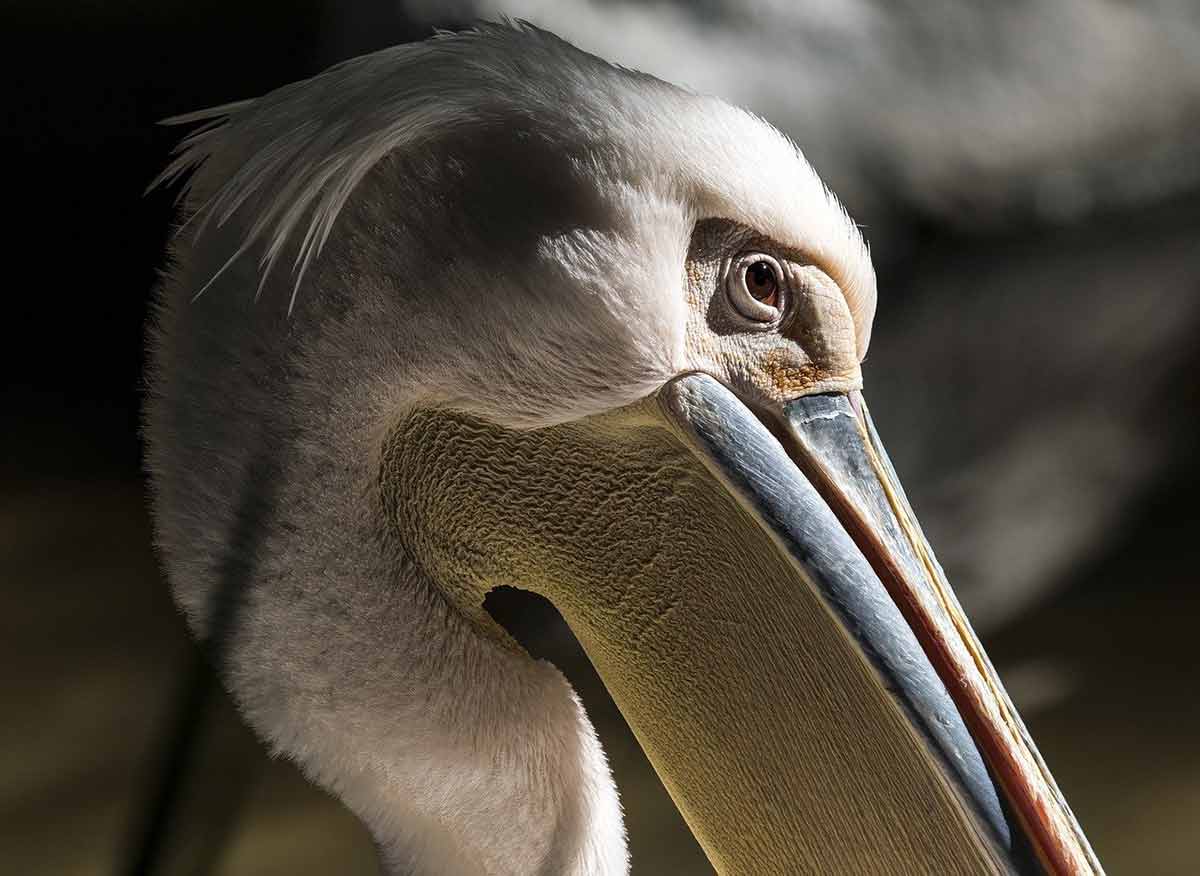 The pelican is a symbol of healing and renewal. The story of the pelican starts with the ancient Egyptians who worshiped this bird as a god, because it was believed that only the most magnificent gods had wings that were able to cover both their heads and their breasts. It was also thought that they would plunge into storms on behalf of sailors in danger at sea, saving them from drowning.

Birds are among the lucky few who were gifted with the ability to thrive on the ground, water, and the air. Known to be one of the largest birds on the planet, pelicans can grow up to four feet and a half tall and can be characterized by their imposing wingspan that can at times stretch to 11.5 feet. Popularly recognized for the unusually large throat pouches which they use for catching prey, these massive social creatures are often seen traveling with their flock filed in an impressively straight line. While this fowl of predominantly white plumage may stand to represent all birds as a spirit animal, we try to have a better understanding of the mystical and spellbinding significance of the pelican symbolism.

A wonderful bird is a pelican,
His bill will hold more than his belican.
He can take in his beak
Food enough for a week;
But I’m damned if I see how the helican.

What Does The Pelican Symbolise?

Often seen brandishing attractive, colorful yet very strong beaks, pelicans, like most birds, are believed to act as our guides on our spiritual journey. Their pale color gives them a higher symbolic meaning compared to their peers as white symbolizes purity and balance. Primarily a water bird, the pelican is known to be much closer to the spirit world since water, particularly the ocean, represents our soul and its spirituality. The huge pouch located near its throat is capable of storing fish and, in the case of animated films, is used to transport their friends and indicates wisdom and ideas, in which a pelican can be seen to feed large quantities of knowledge to its young.

Pelican symbolism reminds us about the importance of good family relationships, asserting that spending time with your loved ones as well as leaving a little time for you to take a breather and focus on yourself is essential, not just for our emotional development but also for our spiritual growth. These large birds tell us that occasionally, we still need to give ourselves the chance to seek within ourselves the wisdom to keep our professional, personal, and spiritual life balanced.

Ask for Help and Accept It

The pelican’s ability to float and glide through the air above water as it seeks its prey suggests that slowing down now and then, even in the most troubling times, allows us to float through life and our emotions with grace and calmness. Seeing this bird soaring in the sky points out that although life is full of challenges, there is no reason for us to take the time and enjoy each of its moments. Along with its mammoth of a wingspan, preceded by a lifespan that can go beyond 30 years, these communal birds remind us that although we may have the capacity to address our most pressing concerns, asking for help or tapping on a team can help accomplish the goals you have set faster and easier.

Found in every continent except Antarctica, the pelican owns a diversity of symbolism in various cultures, wherein these massive birds are believed to represent a person who was violently killed in the past that became a god. In Ancient Egypt, these birds were associated with the spirits who were responsible for guiding the newly departed souls from Earth to the afterlife. Depicted on the walls of tombs and in funerary texts, pelicans, which were often seen as a goddess, were believed to provide protection to those wandering and still confused souls.

Regarded as sacred in Judaism and the Kabbalah, where killing and consuming a pelican was forbidden, the people of medieval Europe saw these mystical birds to be overly attentive to their young. Believed to provide their chicks with their own blood by opening a wound in their breast when food was scarce, it is a spiritual symbol of sacrifice in which the goddess provides spiritual guidance to their followers much like the Christ Jesus. This interpretation was retained and was even associated with other mystical figures who sacrificed themselves for others, but not as much as how the pelican came to symbolize Jesus and His painful journey with the cross.

Nature does not compromise; a pelican is not a compromise between a crow and otter, it is just a pelican. Nature makes no compromises; any inefficient products are recalled to the manufacturer!

Having a pelican as your spirit guide implies your selflessness and how you put others before yourself. Although as a spirit animal, pelicans would remind you to also look after your own well-being, there is always such a natural kindness within that stimulates us to show compassion and generosity each time we can.

Known to glide and hover above the water, patiently waiting for the chance to catch its prey, people with the pelican as their spirit animal are perceived to share this trait. Established to be composed and of great endurance, they can calmly wait for the opportune time, even working with a large group, to ultimately accomplish their goals. Pelicans serve as our reminder that by learning to adapt to others, you are creating an efficient and productive working environment.

When the pelican spirit animal comes swooping down into your life, it passes on to you its amazing quality of being a good nurturer as it teaches you not only to be a good provider to your family but for you to care for yourself as well. They impart with you the ability to let go of the past and to focus on what is current as it adds worth to your purpose.

The pelican spirit animal often comes into our lives at times when letting go of a detrimental event in the past is difficult. They would also swoop down when loyalty and trust in the family become an issue. This is to remind us that nothing good comes out when you allow the past and lack of trust to completely take over. These awesome birds would come into your life to let you know that it may be time to step back, self-reflect, and let peace and motivation back into your flock.

The Pelican As Animal Totem

The animal totem of the pelican is a bird that represents healing and renewal. The story starts with ancient Egyptians who worshiped this bird as a god because it was believed only the most magnificent gods had wings that were able to cover both their heads and breasts; they also thought it plunged into storms on behalf of sailors in danger at sea, saving them from drowning. To some people, its beak symbolizes life’s ability to heal wounds while its large throat pouch symbolizes love or forgiveness.

In the wild, particularly during a hunt, these large birds with long, strong bills raise themselves in the most favorable spot before swooping down to catch their prey. Thanks to their bird’s vision, unmatched focus, and patience, these enable them to strike at the perfect moment, resulting in a successful hunt and great nourishment. As our spirit guides, pelicans swoop into our awareness to remind us about the importance of these traits. They tell us that for us to take full advantage of available opportunities, we need to perch ourselves on a spot where we can utilize our skills and resources to reap a host of amazing benefits.

Spirit of Generosity, Friendliness, and Teamwork

Since these fascinating birds are highly social creatures that rely on and give great importance to their groups, they are regarded as a symbol of social responsibility that provides the spirit of generosity, friendliness, and teamwork to those who are fortunate to have them as a spirit guide. And while hunting for them is always a group effort where each member of the flock plays a critical role, pelicans encourage us to build welcoming and supportive relationships to gain great abundance.

Controlled, calm, and confident, pelican totems help us balance our thoughts and emotions, enabling us to endure and hold a lot, much like these birds of large bills. By having them as your guide, you can feel safe in a group whom you trust to share your journey. Regardless of the challenges, anyone who has the pelican as an animal totem does not regress or isolate but instead, finds strength in numbers.

Also, a pelican animal totem indicates balance and reflection. They are an intimate reminder for you to stay still and remain calm no matter the situation. By doing so, you will find yourself in the guidance of a pelican, strong yet serene, which is a sign of great abundance that is about to come.

The Pelican Symbolism in Different Cultures

The image of a mother pelican feeding her babies is a legend that was passed on even before the birth of Christianity. The story says that faced with starvation, the mother bird wounded herself on the breast to feed her young with her blood. Varying versions say that the mother bird fed her dying chicks with her blood, in turn, losing her own life. Given the tremendous similarities, it is easy to see why the early Christians believe that pelicans symbolize Jesus who gave His life for our redemption through His Passion.

The image of the mother pelican feeding her young has become a symbol of charity, another virtue that the church neverfails to remind us about, making the image of the pelican a strong reminder of the Lord’s suffering and death for us to gain eternal life.

The use of the pelican as a symbol in Native American culture is less ambiguous than it was for Egyptian culture. The bird represents peace, harmony, and spirituality to many tribes today such as the Sioux, Kwakiutl Indians, and Seminole tribes. This may be because these cultures lacked natural enemies like birds of prey that would attack their nests so they could relate to this large waterfowl which only eats when it’s young are ready to feed on solid food. In other words, it represented hope for survival as well as parental care and sacrifice.

The Japanese use it as a metaphor for parents who sacrifice themselves to feed their children, while the Koreans say that if you see one of these birds alone on a shoreline with its head tucked beneath its wings then this is an omen predicting death or tragedy in your family (check here for animals that represent family).

In Chinese culture they are associated with longevity because they live up to 30 years (which is very long) and during olden times people used to believe that since only God could create life from his own feathers by plucking them from his body, then we should be able to achieve immortality through our actions without infringing on any divine rights.

The pelican’s ability to hold a great deal of water in its sac shows that as a spirit animal, they provide us with strength and calmness even in the face of great adversity and challenges. As mystifying and perhaps even confusing as it is, these amazing birds come flying into our lives as a contrasting reminder to never forget about loving yourself while being a part of a whole.

Check also our post on Stork vs Pelican – Similarities and Differences.