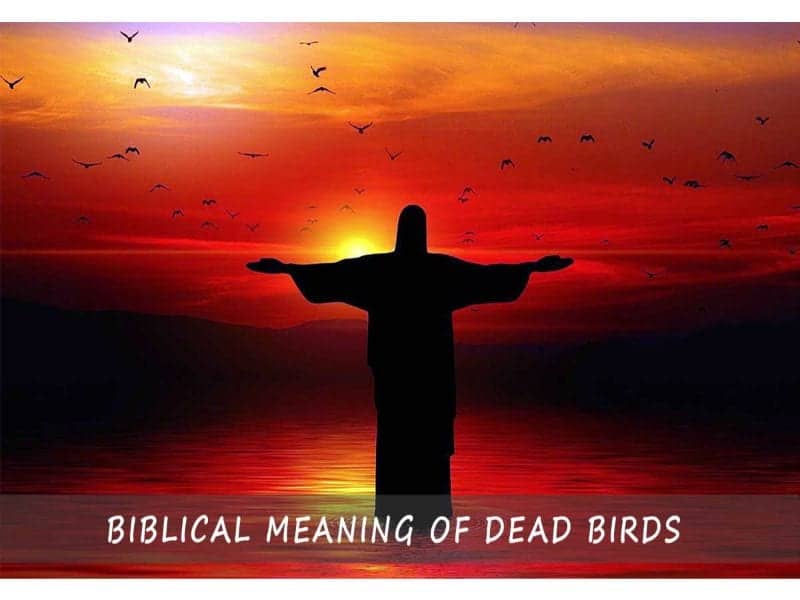 Have you ever wondered what the significance of dead birds is in the bible? Does it mean death or something else? In this article, we will discuss some biblical meanings of dead birds. We’ll cover everything from how they were used for sacrifice to how people would use them as omens. Let’s get started!

We know that a lot of folks are freaking out about what’s occurred… we get it… things look, well, apocalyptic – not only with the birds dying but with the global economic meltdown, the pervasiveness of war and evil, famine and disease… So, what is known about the biblical meaning of dead birds?

In general, there would be a ton to be worried about if there were not a wonderfully powerful God who passionately loves people and has a plan already set in motion to make everything right. In the Bible, birds taught us important lessons about our relationship with God. They are mentioned in the scriptures numerous times and for various reasons, citing them both literally and symbolically.

From Genesis on the day of their creation until they voraciously feasted on the fallen beast’s flesh in Revelation, birds are – from cover to cover – all over the holy book. Regarded as spiritual messengers from the heavens that often communicate ideas of transition, hope, and faith, let us dig deeper into the biblical meaning of dead birds. Read here about the general dead bird meaning.

Birds in the Bible

Birds have always been a powerful symbol in religion. With messages that remain relevant through thousands of years, their stories and symbolism continue to inspire and spiritually stimulate us, affecting the deepest parts of our consciousness. Bird symbolism is the manifestation of what the scriptures and our church leaders tell us. They are the epitome of hope and spiritual strength, appearing as honorable references, while at times as a crucial characters of a story.

Birds personify hope, mercy, and divine intervention among other things. Their presence in the bible, though numerous, resonates around those beliefs, pretty much summing up what God has always wanted us to perceive.

God sends these winged creatures as a symbol of trust that He is always with us. All it requires is for us to slow down and observe the birds as they may be the answer to our broken hearts and spiritual struggles.

Dead Birds in the Bible

Birds communicate with prudence; not only does this allow us to open our hearts for better perception, but it also motivates us to express ourselves freely and with utmost wisdom and sensitivity. Birds traditionally symbolize a new beginning and as omens of renewal, they would often represent the removal of obstacles or challenges that ultimately reveal something better in our lives.

Beginnings abound from endings suggesting that the pain of loss and sacrifice is required to starting anew. Death or loss reminds us that we are about to experience a period of renewal; that a cycle in our lives is coming to a close. Again, the story of Noah and the great flood is a fine example since the events that occurred after is a story of rebirth and forgiveness.

For some, dead birds may be a symbol of loss and misfortune. The passion and sacrifice of Jesus was a period of persecution and pain. But it then resulted in our salvation and our spiritual victory over sin and death. In this light, the scriptures have taught us that even though adversity is a necessary evil and that suffering can never be avoided, all it requires is for us to remain faithful, to be still, and to know that He is God.

People who are in touch with their spirituality look for signs from nature. It may be a message of awareness, a lesson that we need to learn, or an omen, but seeing a dead bird is an indication of something exceedingly important that is about to happen.

Dead birds denote a lot of symbolic value, wherein a white bird indicates spiritual unrest and a looming conflict, contradicting its color of peace and purity. Birds are regarded as a symbol of vision and knowledge. Therefore, images of its demise may translate to a lack of spiritual trust towards our spirit guides. It could also be a manifestation of our narrow-mindedness towards faith, spiritual beliefs, and religion. Various cultures portend birds as life-bearers, prompting them to interpret a dead bird as a representation of our diminishing faith, of our beliefs falling through. A dead bird’s image may be reminding us of our need to renew our faith and to strengthen our spirituality.

The Bible mentions dead birds in a number of different ways. They were often used as sacrifices to the Lord, and it was believed that they would be accepted because they had died for their sins. (Leviticus chapters 13-14)

In some places, especially those where people worshipped idols such as Baal or Molech, people would burn them alive to please these gods. This practice was considered sinful by God’s standards; however this didn’t stop many idol worshippers from continuing with this ritualistic sacrifice during worship ceremonies.

It is also believed that deadly storms are referenced when there are warnings about “deadly fowl” coming onto land, which usually means rainstorms or bad weather caused by god

Mentionings of Dead Birds in the Bible

Birds are considered as a messenger from God particularly in the bible. They bring us comfort and encouragement as they serve as our constant reminder that God is always watching us and that there is nothing to be anxious about.

Dead birds in your dream may represent disappointment and failure. It might be a warning to keep watch to prevent an unfortunate event from occurring. But it also serves as a reminder for us to have faith, a message that is sent to us through our dreams perhaps for us to be able to have a vision of what the Lord wants us to learn.

Some folks believe that it could also be a spiritual reminder for us to turn away from our actions that are making life difficult for others. It is possibly telling us that though we all go through a period of confusion, the Lord is not pleased that we are the cause of pain to others.

Is there a Dead Bird Curse?

When a dead bird shows up, people are quick to believe that it is not a good sign. Having the distinction as messengers of God makes it a horrible sight upon seeing these winged creatures being lifeless. People jump to the conclusion that something unfavorable is about to take place.

No doubt that out of all the omens, there is nothing similar to a dead bird as ancient cultures fascinated by the corpses of birds has always denoted a frightening representation in which images of birds falling dead from the sky indicate an imminent environmental disaster.

In Haiti however, it is believed that if a person finds a dead bird and picks it up by the head or feet, then they will be cursed. They believe this because you can’t see the curse coming-it just grabs you from behind, so in their culture picking up birds makes perfect sense.

God has some very strong messages in what Jesus said that He wants you to hear and apply to your life and what is the Biblical meaning of dead birds – They are found in Matthew 6:25-27 and Mark 1:17. Let’s take a look:

“Therefore I tell you, do not worry about your life, what you will eat or drink; or about your body, what you will wear. Is not life more than food, and the body more than clothes? Look at the birds of the air; they do not sow or reap or store away in barns, and yet your heavenly Father feeds them. Are you not much more valuable than they? Can any one of you by worrying add a single hour to your life?” ~ Matthew 6:25-27, NIV

So, what is God saying here? People are massively important to Him… You matter to Him so much that He has pursued a relationship with you! You matter so much to Him that He sent His Son to die in order to pay for all the wrong you have done or will ever do (John 3:16)! And then, He backed up His power and authority by rising from the dead!

The key is that you have to trust Him and what He has said!

Rejoice in the Lord always. I will say it again: Rejoice! Let your gentleness be evident to all. The Lord is near. Do not be anxious about anything, but in every situation, by prayer and petition, with thanksgiving, present your requests to God. And the peace of God, which transcends all understanding, will guard your hearts and your minds in Christ Jesus. ~ Philippians 4:4-7

Do you want certainty in these uncertain times? Trust in Jesus – accept what He did for you on the cross, then live for Him – If you do, you won’t ever regret it.

In case you’re interested read more about the red cardinal biblical meaning which is generally believed to be spiritual messengers connecting earth and heaven.  The common belief which has been traded from generation to generation is that “Red cardinal represents God”. However, when doing the reality check with the Bible there is no direct reference to it. Meanwhile, there are several instances throughout Scripture that mentions objects being crimson red like the blood of Jesus Christ and scarlet cord which the Rahab hung from her window to safeguard Joshua and his team in Jericho. However, these scripture references highlight the red color; there is nothing that refers directly to the red cardinal bird.

You might be also interested in the biblical meaning of seeing a Blue Jay, read more here.

Out of the approximately 10,400 known bird species, about 1,300 (13%) are classified as threatened with extinction, 9% as near threatened, and of the remaining 78% many populations are declining. There is a general consensus among scientists who study these trends that if human impact on the environment continues as it has one-third of all bird species and an even greater proportion of bird populations will be gone by the end of this century.

Human activity is the greatest cause of bird extinction around the world. The top human causes of bird extinction involve the increased human population, destruction of habitat (through development for habitation, logging, animal and single-crop agriculture, and invasive plants), bird trafficking, egg collecting, pollution (in fertilizers impacting native plants and diversity, pesticides, herbicides directly impacting them as well as the plant and animal food birds eat, including the food for their food source further down along the food chain), and climate change and global warming. Due to the increasing human population, people seek additional space from what was once wild. This is a major contributor to extinction.

Beyond the songs, the colorful plumage, and the awesome aeronautics, birds have made their presence known to us, making their absence or death distinctly obvious. A dead bird does not automatically mean certain displeasure or misfortune, it may likely mean the end of something, or a beginning. Although they may not always be a dominant figure, the message that they bear as well as their significance is, without exception, powerful.

5 thoughts on “The Biblical Meaning Of Dead Birds”