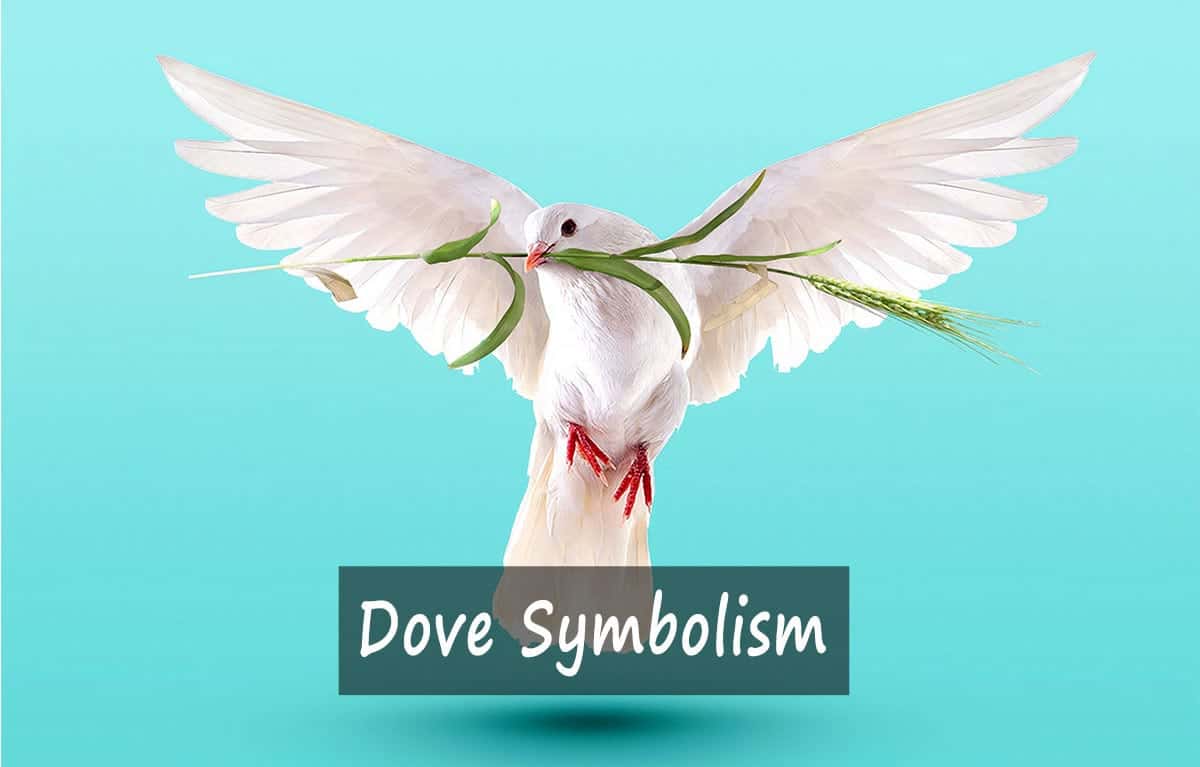 The dove is one of the most recognized symbols in the world and it has a long history. It can be traced back to ancient religions and cultures, but what does this symbol represent? The modern interpretation of the dove as a peace symbol comes from World War I when Allied forces released white doves at important celebrations. This article will discuss what each color variation of the dove stands for, as well as how you can use this symbolism to your advantage!

Doves have always fascinated people, and are probably the oldest domesticated birds. The ancient Egyptians cultivated them as early as 3000 BC, and later the Romans. In many world mythologies and religions, the dove symbolism stood for a universal animal symbol of harmony, peace, love, tenderness, and sublimated Eros.

Doves appear in the Bible, for example, when Noah released one out to see if it could find dry land. It also appears in many paintings and sculptures depicting Mary’s motherhood and her Son’s crucifixion.

Great ideas come into the world as gently as doves.

What Does a Dove Symbolize?

Doves are a very complex symbol. They represent messengers of peace and all good, so people usually wait for pleasant events after contact with these birds, and fortunately, they are right in most cases.

The dove can be seen as a symbol of purity and innocence often associated with new life or love; hence why its used in wedding ceremonies so frequently. In Christianity however, depictions show the dove as a symbol of the Holy Spirit.

We must combine the toughness of the serpent with the softness of the dove, a tough mind, and a tender heart.

The dove is a symbol of love and peace. It’s known to be a gentle bird that prefers staying within the confines of its home, unlike other birds which are more likely to fly away. The dove has been used as a symbol for the Holy Spirit since early Christian texts like John 1:32-34 and Matthew 3:16, where it takes on an important role in Jesus’ baptism.

The dove has been a symbol of love and peace for centuries. The Ancient Greeks believed the doves would bring messages from the gods. Christians use it to represent their belief in God’s unconditional, sacrificial love for humanity. In many cultures, seeing a dove means good luck is coming your way!

In wedding ceremonies, folklore, folk songs, proverbs, and fairy tales, the dove symbolizes the archetypal symbol of love and fidelity. That is why doves are associated with lovers, and some couples still have the symbol of white doves at their weddings.

The mourning dove represents spirit and communication with the spirit. It is believed that with the appearance of mourning doves, opportunities for development and growth appear. They were once believed to bring death, but only under unusual circumstances.

The song of this dove could bring rain. Several cults believed that this sad cry is heard when the soul leaves the earth. Others believed that mourning doves brought souls to heaven.

Mourning doves represent peace, love, security, piety, and friendship. They also symbolize forgiveness and liberation. This dove can be considered a beloved deceased who comes to a message of hope, grace, strength, peace, and love.

The significance of the white dove is present in many cultures, and all beliefs associated with it have positive meanings. White doves are symbols of new beginnings, peace, fidelity, love, happiness, and prosperity, and their release is a tradition that has been associated with ceremonies, rituals, and celebrations for centuries.

The white dove is a symbol of birth and marriage, so that, often during the wedding ceremony, the newlyweds release two white doves together. It is believed that the marriage will be happy if they stay together after takeoff. A white dove at the place of celebration is considered a very auspicious sign.

The release of white doves represents peace, prosperity, and success. That is why they attend every important event, such as graduation, religious ceremony, sports event, and concert.

Pablo Picasso’s famous lithograph “Dove of Peace” was an integral part of the Paris Peace Congress poster held in Paris in 1949. Later, Picasso developed this depiction of a dove into a simple drawing that was used as a symbol of hope during the Cold War and became one of the most recognizable symbols of peace. The lithograph was very interesting, playful in shades of white and grey. Picasso captured the essence of the dove shape and, besides its simplicity, created a powerful image of great liveliness. Unlike ordinary doves, his legs were completely covered with feathers and they looked exquisite and unusual. That dove became a symbol of peace.

The depiction of doves later became a common motif in the artistic work of Pablo Picasso. This proud bird is often depicted in merry flight carrying olive branches and flowers in its beak, wings, and legs. Picasso later developed a realistic image of a classic dove into a simple drawing that can be understood by all people, regardless of religion and culture.

The white dove often appears on drawings, posters, and signs of events that promote peace, such as the Olympics, protests against violence, and pacifist literature.

The dove has a significant place in the Bible, as it corresponds to the reputation and beauty of this bird.

When the dove completed the task and brought an olive branch in its beak, during Jesus’ baptism in the Jordan River, the heavens opened. The dove is also mentioned in Jesus’ words, when he told his followers, instructing them to preach his teaching. This bird is a symbol of spiritual purity, it means the soul of a preacher. That is why it is not unusual for a dove to appear in Christian iconography.

The story of Noah and the general flood in the Bible describes one of the earliest uses of the dove as a messenger. In the Old Testament, the dove is a symbol of peace, goodwill, and forgiveness, in the New Testament the Holy Spirit, love, and mercy of God. The seven doves represent The Seven Gifts of the Holy Spirit. Often the twelve doves symbolize the Twelve Apostles. The dove is depicted in Christian art when an angel announced to Mary that she would give birth to the Son of God.

Christian dove symbolism encompasses purity, inspired thought, peace, baptism, the scene of the gospel. The dove calls for the purity of God, and its light flight reminds us of the descent of the Holy Spirit into the soul. It is a beautiful painting, which lasts for centuries.

Spiritual dove symbolism includes spiritual values, healing, salvation, and resurrection. The dove has long been associated with motherhood and femininity. For example, the mother of the Sumerian goddess Ishtar often depicts holding a dove. The ancient Phoenicians associated the dove with Astarte, the goddess of love and fertility. In the ancient Egyptian tradition, the dove was a symbol of innocence.

In Greco-Roman mythology, the dove is a symbol of love and renewal of life. Thus, the Greek and Roman goddesses of love, Aphrodite and Venus, symbolically represented with doves. It also stated that the dove in Ancient Greece was associated with harmony and its symbol, the number eight.

Doves are in the Hindu tradition messengers of the god of the dead. The Indians believe that the killing of the dove was followed by an accident.

For centuries, the dove has symbolized loyalty and longevity in China. According to the basic rhythm of the seasons, which is the change of yin and yang, it is believed that in April, on the day of the spring equinox, the sparrow turns into a dove, and the dove into a sparrow where the dove is a symbol of spring.

In some traditions, the dove symbolizes your guardian angel. It is believed that a dove can warn a person about an impending accident. Killing a dove is a great sin because it represents a bird of God. Besides bringing pleasant news, doves flying nearby are angels and souls of loved ones who have left the physical world.

Doves on earth are aware of their environment and show a developed sense of presence. As beings of earth and air, pigeons are the link between intuitive thought and shared reality. They connect intangible knowledge with physical practicality. Doves represent the balance between thought (air) and matter (earth).

This connection between the higher mind and the practical level of your life makes the dove perfect for bird dream interpretation:

The dove represents peace, calms your anxious thoughts, allowing you to find renewal in the silence of the mind.

The dove is a messenger of the spirit and the mother symbol. It gives you an inner peace that helps you live peacefully and with purpose. Read here about the Dead Dove Meaning.

White doves come to good people. This bird on the window sill may indicate positive energy, which comes from the tenants and attracts. The dove proactively tells the homeowner about important news. Friendship with a white dove can be a guarantee of protection from various troubles.

It would be good if you make a feeder. The birds will soon show gratitude for this gesture. People where white doves stay, forget about fires, floods, and other troubles. But, if a feathered friend disappears and never returns, you should not ignore this, showing extreme caution.

Don’t be afraid of the dove staying for a while, look out the window, and fly away. This could lead to very important news soon.

An excellent sign is the grass in the dove’s beak – the messages will be positive.

The white dove is almost certainly a positive sign. A negative signal can be, for example, a bird hitting a window. But there are other versions. Every object in the beak is a symbol of money. You would expect a salary increase, bonuses on personal accounts, or lottery winnings. The white dove is a common sign because people often encounter these birds. White doves promise people important news, changes in personal life, and protection.

While a handful of cultures believe that the image of a dove’s feather symbolizes a period of mourning, the bird’s protective nature contradicts such a thought and instead tells us that our guardian angels are around and are constantly keeping watch. It tells us that though life does not always go as planned, our spirit guides will stay with us until the very end. Read more about the dove feather meaning.

2 thoughts on “What Does the Dove Represent Spiritually?”