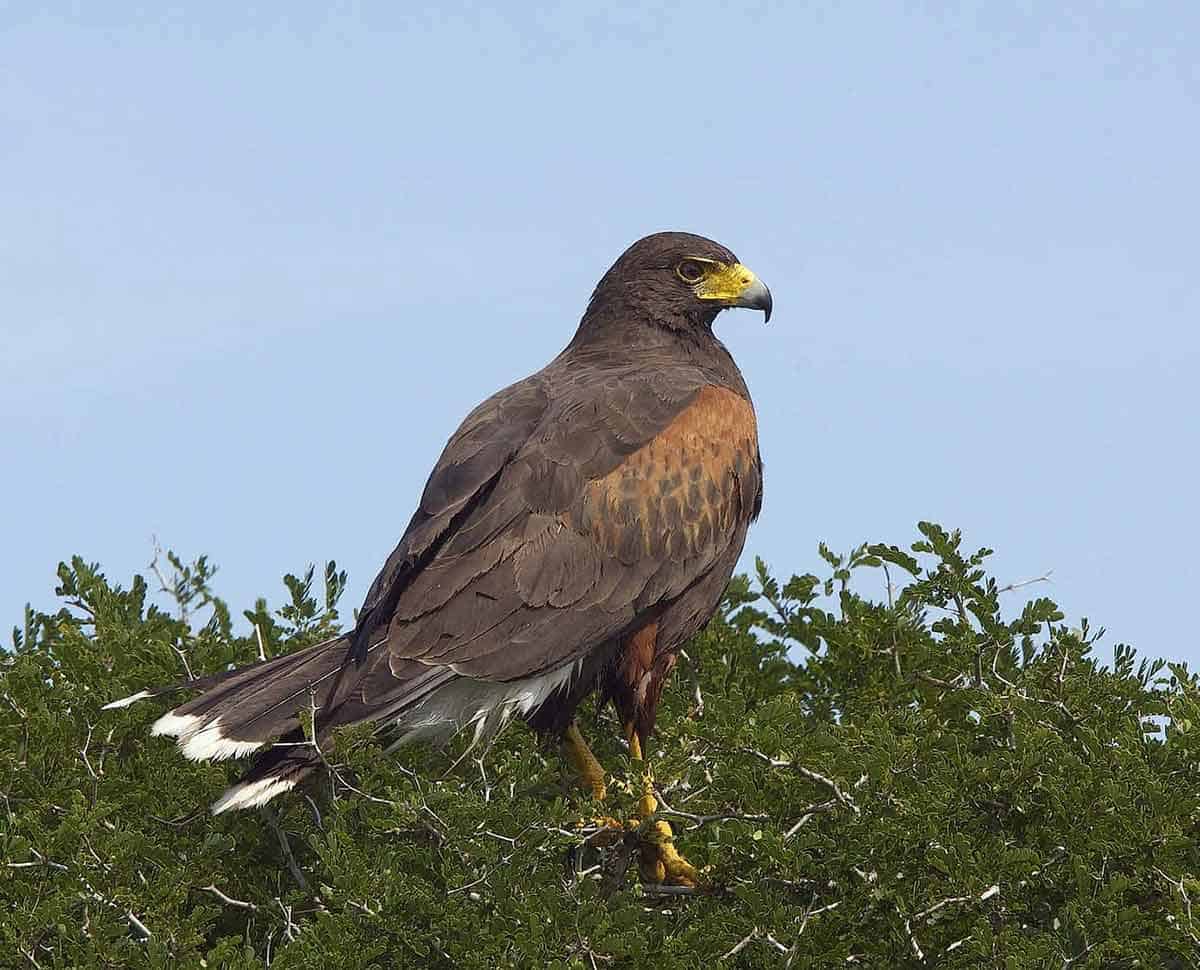 Also known as raptors, birds of prey are fascinating creatures that remain at the very top of the food chain thanks to their unique traits and capabilities. Being the largest state in the continental United States and being uniquely positioned in the migratory path of numerous species of birds, Texas has no shortage of raptors. The best thing is Texas has an amazing mix of birds of prey. Most of these raptors live here all year long while others migrate from the north during the breeding season. Let’s take a look at the top 10 birds of prey in Texas.

This is a very common bird of prey in Texas and North America. It is a year-round resident to the entire state.

The red-tailed hawk is one of the largest birds of prey in North America with a length of 17.7 to 25.6 inches and can weigh up to 51.5 oz. They have a wingspan of 44.9 to 52.4 inches. These hawks are easily recognized by their large size, red tails and shrilling screams. You will mostly see them perched high on telephone wires or treetops. Although common, they are a treat to spot.

You will mostly spot the red-shouldered hawk in the eastern and southern parts of Texas. These are medium-sized hawks with a wingspan of 37 to 43.7 inches. They weigh between 17.1 and 27.3 oz. The distinguishing feature is the reddish-brown breast and white or dark checkered wings.

Just like the red-tailed hawk, red-shouldered hawks perch high on wires and in treetops searching for small reptiles, mammals, amphibians and at times other birds to feed on. They return to the same nesting site every year.

The Bald Eagle is the national bird of the United States. It is not a permanent resident but arrives in Texas as early as August. You will spot the largest population of bald eagles from early October to late May. Bald eagles are huge birds of prey. They have a wingspan of 71 to 93 inches and can weigh up to 13 pounds and feed typically on fish. When fish is scarce, they eat small mammals and birds. Please check our post on the eagle feather meaning.

The Crested Caracara is a permanent resident of Texas. As expected, the male is smaller than the female. Together, they have an average length of 22 inches and a wingspan of about 4 feet. The females can be as heavy as 3 pounds whereas the males achieve a maximum weight of 46 ounces.

A unique trait about crested caracara is that they are not picky about what they eat. While their menu is made up of a wide selection of small animals, they never care if they catch their prey alive or dead.

Also known as the American Black vulture, the black vulture is a permanent resident of Texas. It is uniform black with silver patches on the underside of its wingtips. They have a bat-like flight style.

The black vulture is a large bird with a wingspan of up to 63 inches. It can weigh up to 4.6 pounds and achieve a height of up to 29 inches. Their diet is primarily carrion. They feed on the carcasses of dead animals of all sizes.

Golden eagles make the list of the best-known birds in the Northern Hemisphere. They live in Texas all year and breed from February to November. These are large birds with an average wingspan of 4 feet and a length of 31 inches. The females can be as heavy as 14 pounds. Needless to say, the females are bigger than males.

The golden eagles mostly prey on mammals. They feed on squirrels, marmots, prairie dogs and jackrabbits. They are a magnificent sight.

These are very common birds of prey in Texas. You will spot them as far northwest as Amarillo and as far south as Brownsville. While it is a small bird of prey, the Mississippi kite has a wingspan of about 32 inches and can be as tall as 15 inches. The female, which is larger, weighs up to 11 ounces whereas the male weighs a maximum of 9 ounces. These hard-to-miss birds feed mostly on insects such as grasshoppers, beetles, dragonflies, cicadas and katydids.

Northern Harriers are medium-sized birds of prey with a maximum length of 20 inches and a wingspan of 48 inches. Females can weigh up to 21.16 ounces whereas the males achieve a maximum weight of 13.75 ounces. These birds feed mostly on small birds and mammals.

The Northern Harrier is hard to spot bird especially in the summer months. You will be able to spot it from late August to mid-October or early April to mid-May. This is when they are migrating.

Ospreys are mostly coastal birds. They are not permanent residents and migrate to and through Texas from mid-March to late May and again in early September to mid-November. They are not very common. If you want to spot them during winter, you will have better luck along the coast.

On average, the Ospreys have a height of 25.19 inches and a wingspan of 68.50 inches. Females can weigh up to 4 pounds whereas the males achieve a maximum weight of 3 pounds. Ospreys feed mostly on fish.

Peregrine falcons are resident of West Texas. You will find them in the Trans-Pecos region. These birds of prey are quite common in certain times of the year mostly when they migrate to breed. They have a height of 18 inches and can weigh up to 3.3 pounds. The males weigh about 2.2 pounds.

The peregrine falcons are considered the fastest creatures on earth due to their ability to dive at speeds of up to 200 mph. They feed on birds.

Texas boasts a whopping 639 bird species and is possibly the hottest birding hot spot in the country. The Rio Grande Valley is the main bird watching hotspot. The large number of birds and butterflies attracts a huge number of visitors all year round. However, while birding is better along the state’s southern border, you still need to head north. There are plenty of other hotspots. The most notable ones are:

Don’t forget to wear comfortable clothes and bring your camera.

Check here also the birds of prey of Ohio and check our comparison on Osprey vs Bald Eagle.