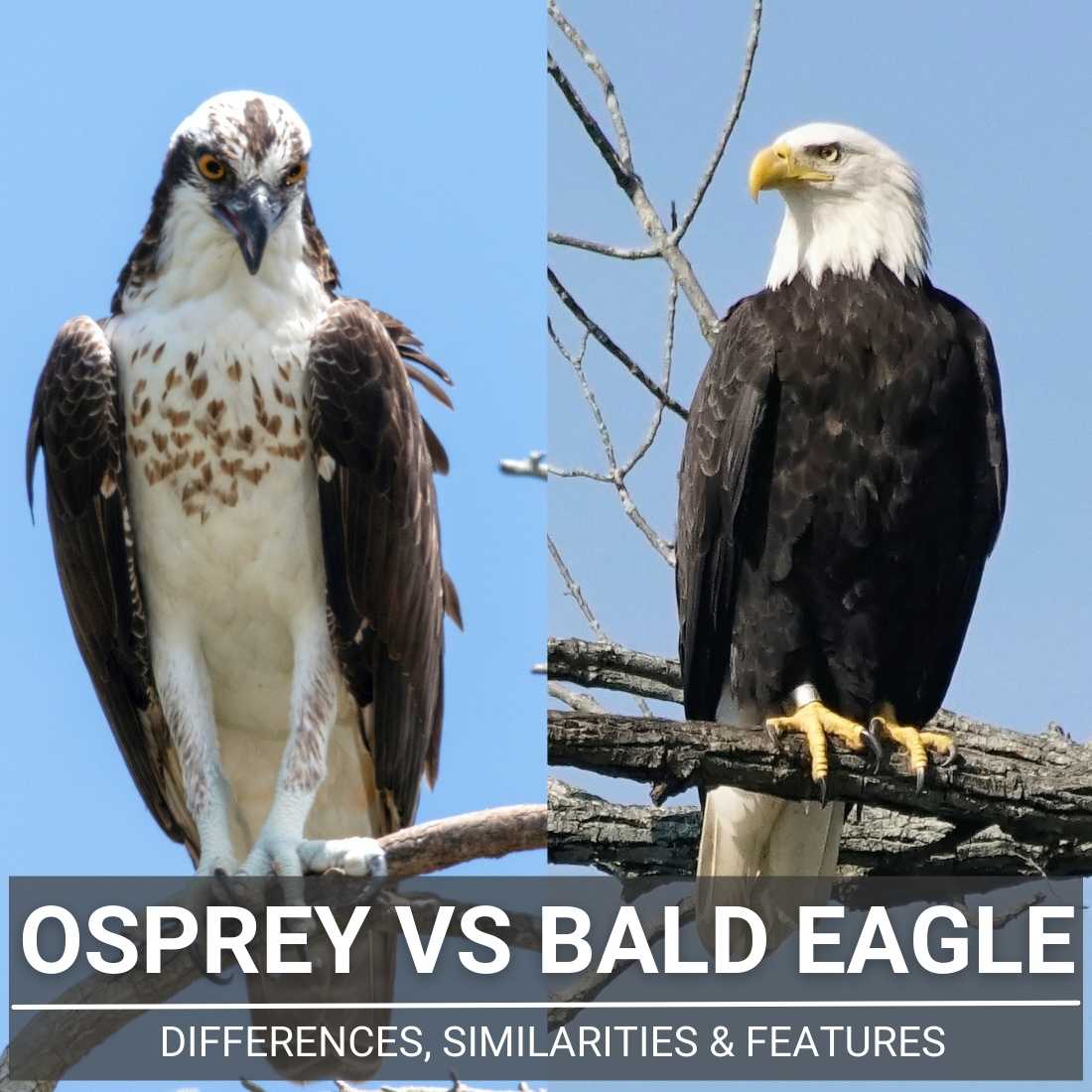 Raptors are furious and aggressive birds. They are the main center of attention for bird enthusiasts and avian scientists due to their unique anatomy and predators’ nature.

If you want to know the answers to these questions, you come to the right place.

Osprey and Bald eagle are the most common and unique of all raptors. These raptors are remarkably huge in size and belong to the same taxonomic order. Along with that, both these birds have razor-sharp talons and beaks; however, they have many numerous distinctions that differ from them.

Here is the overview of all the differences between the Osprey and the Bald eagle.

Differences between Osprey vs Bald eagle

The Osprey may be found on every continent, with the exception of Antarctica. In North America, they prefer to nest near coastlines and vast inland bodies of water. Ospreys survive the winter in various locations, from Florida through Mexico and even Southeast America. Osprey may be found around both fresh and saltwater, where enormous amounts of fish can be found in significant numbers.  Ospreys on their migratory route have been spotted far from water, even over the desert.

On the other hand, bald eagles are a bird species native to North America. Its range stretches from the Mexican border all the way through the United States and into Canada. It is possible to observe them throughout the year in Alaskan territory, along the East and West coastlines, in the Rocky Mountains, and along the Mississippi River. Along with that, you can also find some of the bald eagles in Florida.

Bays, lakes, ponds, rivers, and certain shores are among the bald eagle’s favorite habitats. In the winter season, the birds assemble near open water in long trees for the purpose of spotting prey.

The Osprey is a huge hawk with a long beak. This bird is distinguished by its white underparts and a kink in its slender wings. In the adult stage, the upper parts are dark brown with brownish-black markings on the wings and brown speckles on the breast. The head is white with a brownish cap and a brown stripe down the body.

The beak of an osprey is short and blackish in color. Osprey has a sharp beak that aids the bird in tearing fish apart for consumption. Osprey has talons that are exceptionally long, curved, and pointed, which aid them in grasping the fish they catch. Their white feet are covered with spiky scales. Their outermost toe is reversed, allowing them to retain their prey during flying.

While Bald eagles are distinguished by their white heads and tails, which contrast with their brownish bodies and wings, their legs and beaks are a brilliant shade of yellow. Immature birds have blackheads and tails primarily, and their brownish wings and bodies are speckled with white. Bald eagles’ beak is also hooked, which allows them to tear into flesh. They also have yellow toes on their feet.

Ospreys have typical wingspans ranging from 60 to 70 inches and weigh 4-5 lbs. Ospreys have extensive, slender wings with a distinct twist that gives them the appearance of an M-like shape.

They have long, slender wings with a distinct twist that gives them the appearance of an M-shape when viewed from below.  The bald eagle has a wingspan of 80-82 inches and a weight ranging from 7 to roughly 14 pounds.

The Osprey’s diet is almost 90 % composed of fish. Fish between 4 and 12 inches in length are the most common prey. They eat various fish, including flounder, smelt, tang, bullhead, sucker, and gizzard shad.

Bald eagles feed on other birds as well as small animals, snakes, turtles, and crabs, in addition, to live fish. Bald eagles also hunt on ospreys, stealing their prey. They are also known to devour carrion in large quantities.

In order to capture fish, Osprey can dive 3 feet deep into the water. They also can fly directly from the water, rather than needing to swim to the land first.

Osprey nests are constructed of corn sticks and creased with various softer materials. Most nests are around 5.5 feet broad and 1.5 feet deep in depth. Ospreys like to nest in open locations, frequently on trees or man-made towers.

Similarities between Osprey vs Bald Eagle

The Osprey and the Bald eagle are fascinating large raptors and belong to the same taxonomic order. Both have sharp talons and curved beaks. The diet of both birds mainly consists of small fish. Both have clear, sharp vision and prey with great accuracy. Finally, both ospreys and bald eagles fly at high altitudes.

Ospreys, also known as river hawks, fish hawks, and seahawks, are enormous birds of prey that live in rivers and lakes. Ospreys are comprised of a single species belonging to a single family, as well as four subspecies that differ in physical characteristics and are split geographically.

Here you can check all Osprey sounds

Up to 80% of eagles perish in accidents or from malnutrition before they reach maturity, but those that do mature can survive for 15 to 20 years.

Here you can check all Bald eagle sounds

The Osprey is a huge hawk with a long beak. This bird is distinguished by its white underparts and a kink in its slender wings. The head is white with a brownish cap and a brown stripe down the body.

Bald eagles are identified by their white tails and heads, contrasting with their brownish bodies and wings. Their legs and beaks are a brilliant shade of yellow.

Ospreys and Bald eagles have excellent vision and can catch their prey with pinpoint accuracy. Both ospreys and bald eagles fly at great altitudes and have talons and beaks that are razor-sharp.