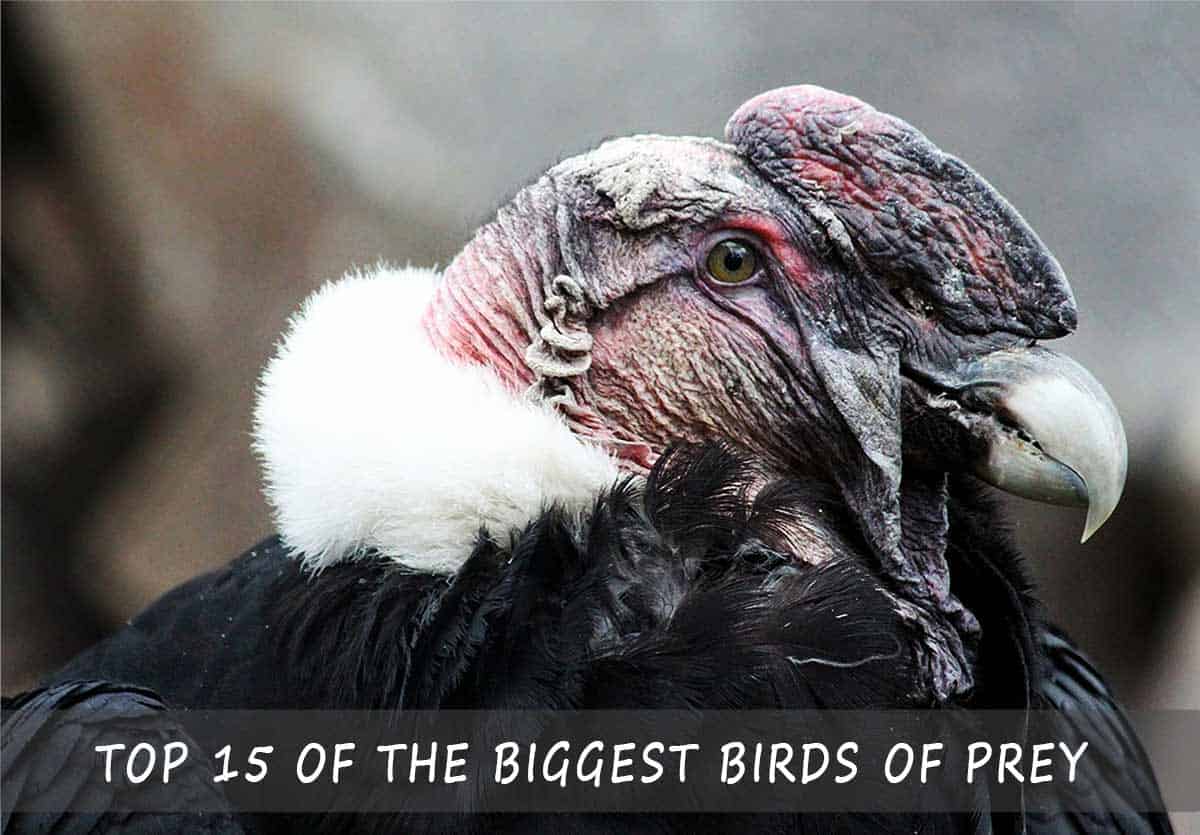 The heaviest and largest birds who had the ability to fight are now extinct. The largest and heaviest bird species living is in mountains, plains, forests, and riversides. These fascinating creatures are at the food chain top owing to their amazing capabilities and traits. The top 15 of the biggest birds of prey are sure to astonish you as they are the biggest birds on earth.

The ostrich is the largest living bird. Native to Africa, it weighs from 63 to 145 kilograms, and the male ostriches’ weight 156.8kg. The male ostriches may be 6 to 9 ft inches in height, and the female’s ostriches are from 5-6 ft 7 inches tall. Ostriches have powerful, large legs – it definitely stands tall with impressive agility (read more about the ostrich symbolism). They sprint up to 70km/h speeds, jog at 30mph, and stride covering 3 to 5 meters.

The Andean Condor is the largest bird with a wingspan of 9.8 feet and weighs 33.1lbs(15kgs) (it’s the largest but not the heaviest bird).  They live in mountainous regions that have abundant wind to help in flight with their body weight. The Andean Condor feeds on large carrion, it is a vulture. Check also our comparison: condor vs vulture or read more about the condor symbolism.

Lappet Faced Vultures feature a wingspan of 9.8 feet (3 meters). They weigh 30.8lbs(14kgs). It is in Arabia and African savannahs (read here about the top African birds of prey). These birds of prey kill flamingos, antelopes, and gazelles. This raptor is aggressive and is successful in keeping them away from carrion.

The Emperor Penguin reaches in height 51 in (130 cm) and weighs (49to 99 lb) 22 to 45 kg. It is the heaviest and tallest among living species of penguin. The female and male emperor penguins are the same in size and plumage. Read here about the penguins and their spiritual symbolism.

Bearded Vulture weighs up to 8 kgs (17.7 lbs). Bearded Vultures are in Asia, Africa, and Europe. They are scavengers and their wingspan is over 3 mts(9.8ft). They swipe up the carcasses of dead animals and break the bones by dropping them from heights. It feeds on the marrow.

The African Crowned Eagle is an aggressive raptor residing in the tropical Africa rainforests. This bird of prey has a 2 mts wingspan (6.5feet). It hunts animals weighing 77.1 lbs. (up to 35 kgs). This Crowned Eagle preys on small antelopes, chevrotains, hyraxes, and Guinea fowl.

The Northern cassowary is a large bird. Native to northern New Guinea, its average weight is 58 kg(128lb), while females weigh up to (154 lb) 70 kg. Males are smaller with a stocky build. This bird can sprint up to 31 miles an hour or 50 kilometers.

Greater Rhea on the American continent is the largest bird weighing (44-88 lb) 20-40 kgs. It has powerful, strong legs allowing it to run up to 56 km/h or 35mph. It is endemic to Brazil, Bolivia, Argentina, Uruguay, and Paraguay.

The Himalayan Vulture weighs 8 to 12 kgs (18-26 pounds). It is in Central Asia, in the Tibetan Plateau and Himalayan Mountains. Its wingspan is 9 to 10 feet (270-300cm). This bird glides above sea level to 5000 meters. They soar high in the air with minimal effort.  The Himalayan Vulture changes altitude relying on the season.

Steller’s Sea Eagle is in Japan and Russia. It is the heaviest eagle weighing up to 19.8 lbs(9 kgs). It has 8.1 feet (2.5 meters) wingspan. The bird feeds primarily on fish, it attacks baby seals and other large birds. This raptor is an endangered species and gets poisoned as they ingest lead while scavenging on the remains of animals.

The Eurasian Eagle Owl is in the Asia and European forests and mountains. It weighs up to 9.2 lbs/4.2 kgs. The wingspan is 6.5 feet and 2 meters. The prey bird is powerful among the owls. It is known to indirectly kill a human. This raptor feeds on feeder rabbits, rodents, and small foxes.