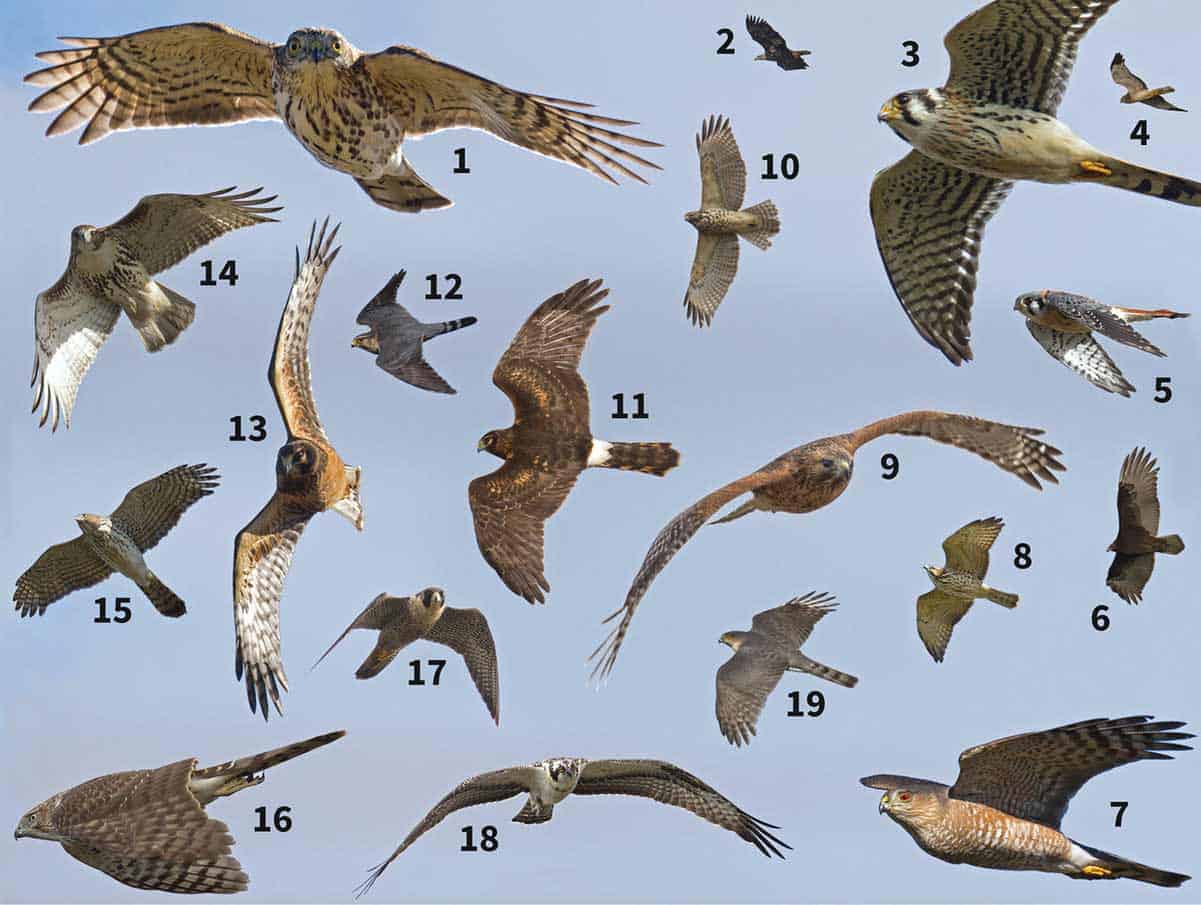 Colorado is popular for its mountains and is at its highest elevation. If you are looking for some of the best birds of prey in Colorado, this post is for you. These creatures have been around since the beginning of time and are fascinating to look at. You can find these raptors all over Colorado but there are a few places that attract them more than others; my favorite being the Rocky Mountain National Park which has a bird-watching station and a lot of space for them to fly freely. There are awesome birds of prey in Colorado that you can see all year long such as eagles, owls, and hawks.

The length of the American Kestrel ranges from 8.25- 12.25 inches. The wingspans are around 20-24 inches. This bird of prey in males is smaller than in females. It weighs around 2.82- 5 ounces and the female weighs around 3-6 ounces. It feeds on mice, insects, lizards, voles, and snakes.

The Bald Eagle is a very big bird and among the biggest birds of prey in Colorado. It reaches nearly 38 inches and has a nearly 8 feet wingspan. The female Bald Eagle is heavier weighing 14 pounds. The male Bald Eagles weight is approximately 11.50 pounds. Their favorite meal is fish and they easily eat anything that they catch.

The Common Nighthawk is all over Colorado state.  The length reaches more than 9 inches, while the wingspan is approximately 22 inches. The maximum weight is 3.5 ounces. The Common Nighthawk eats flying insects as the majority of meals. This bird is dark and tough to spot with the naked eye.

Cooper’s Hawk male and female birds are different in size. The males are over 15 inches in length. The females are nearly 18 inches. The wingspan is around 35 inches in both. The male weighs 14 ounces and the female close to 24 ounces.  The cooper’s Hawks are basically bird hunters.

The Ferruginous Hawk’s habitat can be found throughout the entire Colorado state. The raptor can reach 26 inches in length and has almost 5 feet wingspan. The average weight of a male Ferruginous Hawk is 37 ounces.  A Ferruginous Hawk female weight up to 43 ounces.  They eat medium-sized mammals and feed on small birds.

Golden Eagle is a resident of Colorado state. It has a length of 3 feet and the wingspan is around 7.5 feet. As the common practice of raptors, the females always weigh more than the males. The females are nearly 14 pounds and the males weigh 10 pounds as the maximum. Read more about the Eagle Symbolism here.

The Northern Goshawk is all year long seen in Colorado. They can have a 3-4 feet wingspan and is 19-27 inches in length. It weighs 1 to 3.5 pounds. They prey on the species as per the area they live. It includes shrews, mice, jackrabbits, raccoons, geese, woodpeckers, squirrels, etc.

The Northern Harrier occurs throughout entire North America and is also a resident of Colorado. Their wingspan is 4 feet and the length is 20 inches. The females weigh more than the males, weigh nearly 21 ounces and 13.75 ounces. Their majority of diet includes small mammals and ground squirrels or mice.

The Osprey is a hawk that passes or breeds through Colorado. They can be 25 inches in length and 5.5 feet of wingspan. The male raptors can weigh nearly 4 pounds and females weigh 4.5 pounds. The Ospreys mainly eat live fish they also eat birds, frogs, snakes, mammals, and crustaceans.

The Peregrine Falcon is the fastest creature on earth as they dive over 200 mph speed. There is a size difference between the male and female. The average height is nearly 18 inches. Females weigh about 3.3 pounds, while males weigh around 2.2 pounds.  These feed on other varieties of birds.

The Red-tailed Hawk is found in the whole state of Colorado. The length is around 23 inches and the wingspan are nearly 4.5 feet. The weight of the males is more than 2.75 pounds. The heavier are the females and they weigh over and around 3.25 pounds. The Red-tailed Hawks eat mice and rats in lots. Find an article about the Hawk Meaning here.

The Rough-legged Hawk is in the winters in Colorado. They reach 25 inches in length and 5 feet wingspan. The males Rough-legged Hawk reaches 3 pounds weight and the females are nearly 3.5 pounds. Their diet majorly and in bulk is voles and lemmings, besides birds and small mammals.

The Sharp-shinned Hawks are of length 9 to 13 inches. They have 17 to 22 inches wingspan. The males weight around 3-4 ounces and females weigh around 5-7 inches. Their diet up to 90% consists of small birds. They take other small mammals, such as frogs, insects, and lizards.

Swainson’s Hawk is in Colorado. It is the breeding season. It has a length of 22 inches, while the wingspan is 54 inches. The females weight 60 ounces and the weight of the males is smaller up to 33 ounces. They eat reptiles and also small mammals in early summer.

The Turkey Vulture is across America from Southern Canada. It is into Central America and South America, Mexico, and the continental United States. The weight and length of the Turkey Vulture vary. The length of 25-32 inches and has a 5-1/2 to 6-1/2 feet wingspan. It weighs around 2 to 4-/12 pounds. It feeds on dead animals. Read more about the Vulture Symbolism here.

The Barn Owl is the most common birds of prey and is found anywhere. These are native to Colorado and is found here year-round. They are to a length of nearly 16 inches and has a wingspan of a more than 4 feet. Their weight can get close to 25 ounces. Read more about the Owl Meaning here.

The Boreal Owl is in central Colorado. It is found in the United States and is found in New Mexico, Wyoming, Idaho, Washington State, Alaska, and north to Wyoming.  It is also found in Mongolia, Europe, and China, besides Russia and Scandinavia. The Borea Owl is of length approximately 10 inches and the wingspan is around 24 inches. The weight of the male bird is more than 4 ounces. The females are heavier and it takes more than 7 ounces. The diet of the Boreal Owl is mostly mice and voles. The Boreal own also easts shrews, small squirrels, and pocket gophers.

A general rule is to go to ecological hotspots, near shifts or close to water in landscape or vegetation. The hotspots in Colorado are the birding trails from the eastern plains, rocky Western Slope terrain top, and Rocky Mountains. The southwest and southeast trails also are exciting hotspots for bird watching.

Birds are mostly visible around dawn and dusk or after heavy showers. Birds are hungry in the morning and venture out. So, go with binocs and a camera in hand. Seasonality dictates the bird watching areas.

There are over 400 species that you can see your favorite Colorado birds such as the bald eagle, sandhill crane, cinnamon teal, western tanager, mountain bluebird, and calliope hummingbird. Birding adventure includes guided tours led by experts offering details on birds’ habits and take to better hotspots.

Birding in Colorado is throughout the year. The habitats and terrains include the short-grass prairies. The birds vary with the landscapes. With extreme weather, you can have a memorable experience. The rugged terrains, the semi-desert climate, along with the arid, provides a varied habitat for birdlife and is a hotspot for bird watching. Birdwatching near the Pawnee National Grasslands is a hotspot, a regular stopover during fall and spring for migrating birds. It attracts a random assortment of birds.

Check also the Birds of Prey – South Carolina or Texas Birds of Prey. Also, check our comparison on Osprey vs Bald Eagle.