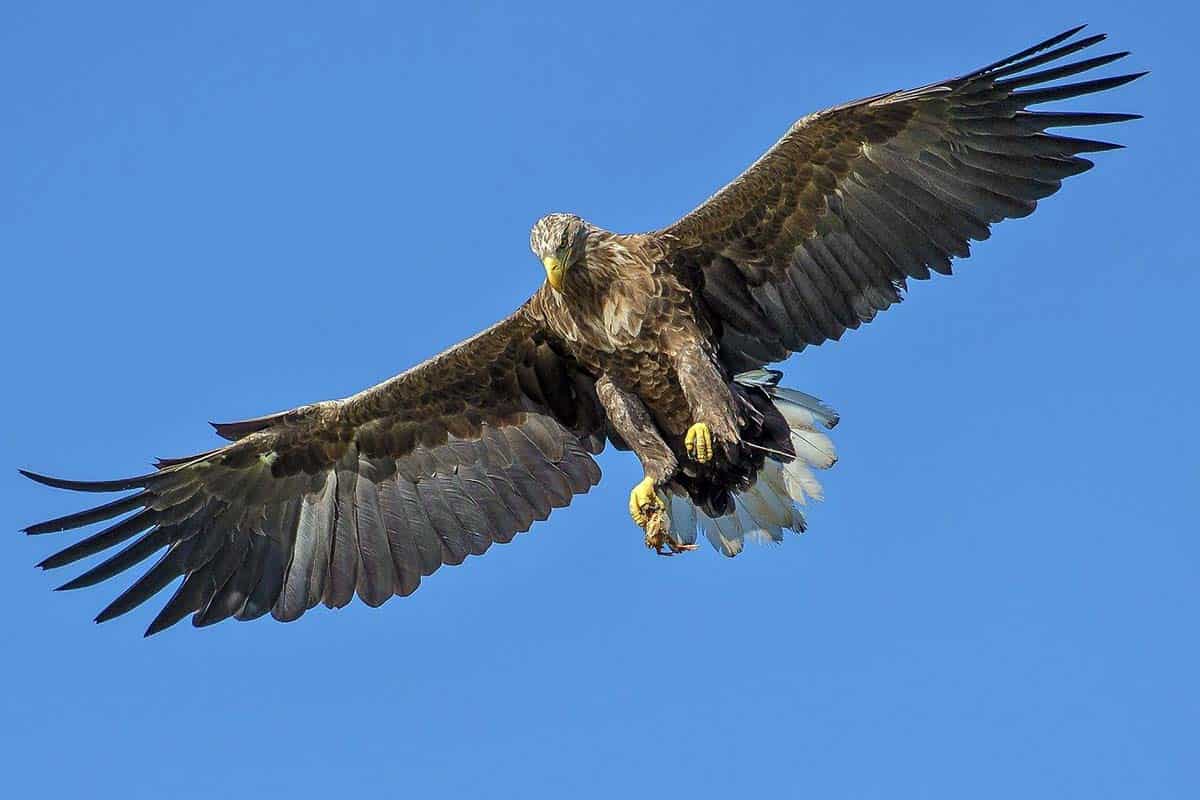 Raptors, also called birds of prey, have distinct features, i.e., powerful grasping feet having sharp talons, hooked upper beak, and fantastic keen vision. They are the hunters of the air as they hunt for their food. Some are live animal hunters, and some scavenge the carrions. We classify raptors into two taxonomic orders, Falconiformes and Strigiformes. Falcons, hawks, eagles, vultures, and some others are present in Falconiformes. They are characteristically daytime predators. Strigiformes include owls, which are characteristically night hunters.

Ranging from mountains to sea and bare land in between, South Carolina provides you with various catchy habitats for birds of prey. It has distinctively significant habitats just in a small compact area. Recorded sightings of 437 different species of birds are in this beautiful state. Hence you can have a lot of entertainment, just in a small place.

We will give a glimpse of some raptors inhabiting the state of South Carolina.

Eagles are commonly known members of the family Accipitridae. They have the top-ranked position in the food chain. They are apex predators due to their size and power.

The bald eagle is the only massive brown color eagle with elegant beauty having a white head and tail. It comprises of large yellow beak and yellow feet. Their beaks are massive. Bald eagles carry a strong meaning and are dark all over the body with irregular white patches.

A beautiful raptor easily identified by its striking pattern of black and white plumage. Its body possesses a long forked tail and slender body. Mostly it flies in small groups. They mainly select tops of the tall pine trees for nesting.

American Kestrel, scientifically known as Falco sparveris, is one of the most common and colorful raptors. It shows sexually dimorphic characteristics- males having bluish-grey color wings while females have brown. Falcon is a common name used for 37 members of the genus Falco. Falcons are famous for their high-speed flight due to their thin-tapered wings, which allow them to change direction rapidly.

Broad-winged Hawk is a small-sized hawk bearing short but pointed wings. It possesses a dark brown back and wings. Black and white bands give their short tail a beautiful look. The Hawk‘s breast is buffy with various brown spotting.

A nocturnal bird of prey, Barn Owl, lives mostly in solitary, have binocular bird vision and sharp talons. They have adapted their wings for silent flight. They possess ivory-colored beaks that look like a nose and have long feathered legs and toes. The fun fact is that their vocalization is like a scream and Owls have a stong symbolism.

They are scavenging birds of prey, dark with white patches near the tips of wings that are conspicuous during flight. They have a greyish bare head, extended feet, and short tail. Interestingly, Vultures don’t possess a voice box, so they make raspy hisses and grunts.

The scientific name of Peregrine Falcon is Falco peregrinus. Peregrine falcons are among the world’s commonest birds of prey. They have an average lifespan of 17 years. The size of there body is 14 to 19 inches and a wingspan of 3.3 to 3.6 feet. The weight of Peregrine Falcon ranges between 18.8 to 56.5 ounces. These falcons are formidable hunters that feed on other birds (and bats) in mid-flight. Peregrines hunt from above and, after sighting their prey, drop into a steep, swift dive which will top 200 miles an hour.

Augur Buzzard is commonly known as African Red-tailed Hawk (check here for the top African birds of prey). They possess the distinct ability to hang stationary as they face a strong wind coming off a hillcrest. They make their habitats in the mountains, hilly areas, and sometimes in grasslands. They have a compact body, long broad wings, and a fan-shaped tail. Their tail is rusty red resembling American Red-tailed Hawk.

Mississippi Kite is commonly known as Gray Kite or Lousiana Kite. It is characterized by a white to pale gray head, slate gray wings and back, medium gray body, and a blackish squared tail that are slightly notched sometimes—eye color shifts from brown to red as they age. An interesting fact is that their lightweight helps them give a buoyant, graceful flight.

Northern Harriers have a facial disk like an owl, long wings and tail, and head giving hooded appearance. They have different color plumage for both sexes; males with black wingtips and females with a streaked breast. Their males can be polygynous; a single male may mate with two or more (most ever recorded was 7) females.

Osprey is commonly known as Fish Hawk. These birds have dark-colored wings and back. Osprey possesses white feathers on the top of the head and under the chin extending down the belly. They give a scaly appearance due to white feather edges all over the back.

Hotspots For Birds of Prey Watching in South Carolina

These birds are elegantly beautiful. Everyone is captivated by their fascinating flight and charming colors. People love to watch them fly. Here are the best hotspots you must visit for birdwatching in South Carolina.

It is one of the best spots on the East Coast. More than 300 species of birds, including exotic species, have been sighted. You can see freshwater marsh impoundment as well as tidal salt marshes there.

It offers the best panorama for one of the best birding event-the annual fall raptor migration. It is not uncommon to see 300 hawks on a good day in September. Mostly seen birds of prey are the broad-winged hawk, bald eagles, American kestrel, Mississippi kites, and many others.

Here you will find a well-managed system. There are wetlands, open water, and hilly habitat. It is located on Lake Marion’s shore, providing a habitat to spend winters for significant numbers of migratory birds. The best times to visit this fantastic place are spring, fall, and winter.

It provides you with a combination of historical and natural panorama along the shores of the Catawba River. There are three trails; nature trail, canal trail, and eagle point trail. You can find nesting bald eagles, osprey, and many others.

South Carolina harbors a wide variety of birds, and most of the birds have habitats near water. You can watch there a large number of raptors and other birds during their migration season. Birding hotspots in South Carolina provide a fantastic view of the birds. Many birding hotspots that are near the water attracts the attention of flocks as well as their lovers. These birding hotspots captivates the heart of a large population during the migration season. Bald Eagle, Mississippi Kite, Swallow-tailed Kite, Broad-winged Hawk, and all other birds mesmerize their lovers with their lovely colors and captivating flights. It would be best if you visit your nearby eye-catching sites during the holidays. It would be great fun for you and your family to visit such places.

Check also the Birds Of Prey Colorado | Texas Birds of Prey. Also, check our comparison on Osprey vs Bald Eagle.