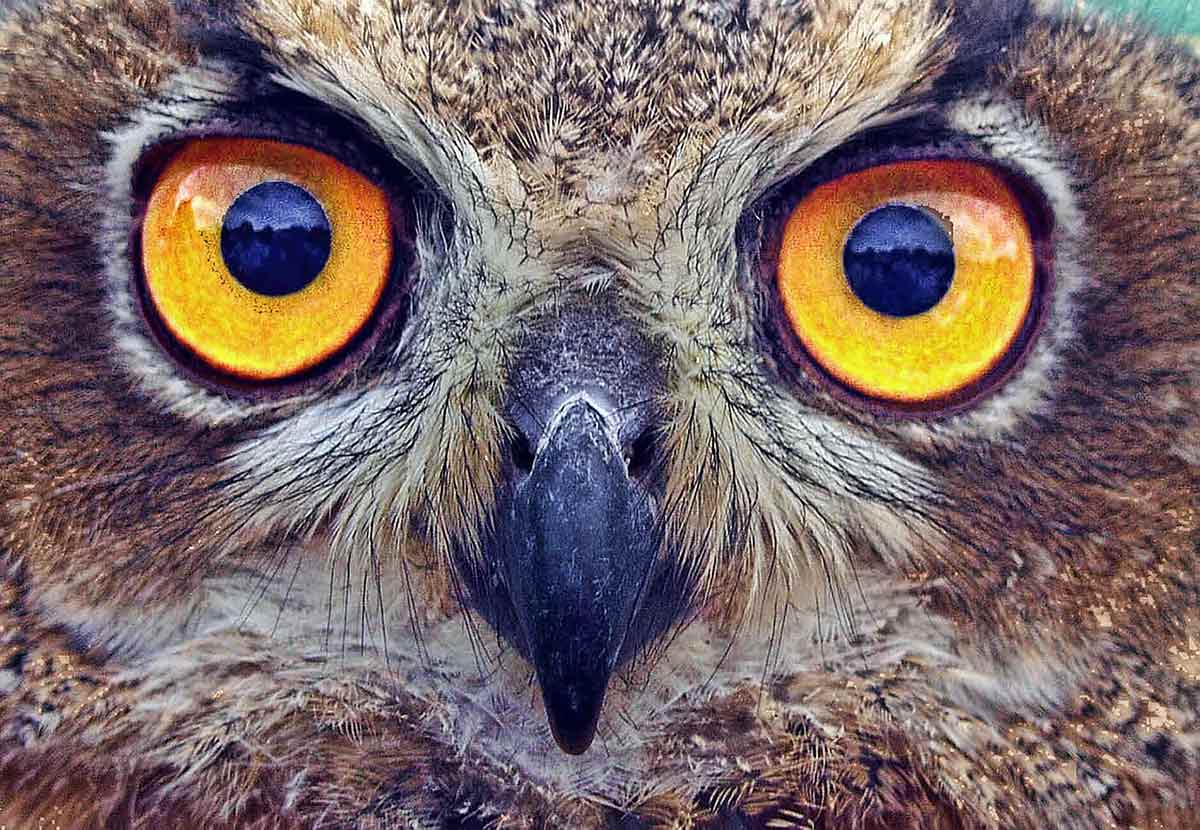 Vision is one of the most important senses in any animal, especially birds. This is because good and strong eyesight is required to have a safe flight. Birds have a lot of adaptations than other animals which enables them to have visual acuity which is better than most animals out there and of course, us humans. The pigeon has been rightfully described as the “Two wings having eyes” animal. The avian eyes of birds resemble that of reptiles. It has ciliary muscles which allow the shape of the eye lens to be changed rapidly and to a far greater extent than the one found in mammals. The eye size of birds is one of the largest found in the animal kingdom.

Birds have a third membrane along with the two eyelids which can be found in vertebrates. It is a transparent movable membrane that protects the eye along with additional functions adhered to it. This along with features present in their eye sockets enable them to see for longer than most animals. The term ‘Hawk-eyed’ has been used for ages to describe people who could see really well. In this article, we are going to talk about some interesting facts about vision in birds. They are capable of doing some really cool things with their eyes as you will find out soon.

Color Vision – What Birds see (and you can’t!)

Birds have superior vision as compared to humans, and that point must be pretty established by now. Birds are tetrachromats, which means they see only 4 colors. UV, green, blue and red. Whereas, humans are only trichromats. We get to see only 3 colors which are red, green and blue. Joe Smith, who is an ornithologist, says that birds have an amazing ability of seeing a whole spectrum of colors which might not be known to us humans. Some birds also have colors which cannot be seen by humans but can be seen by other birds, which are essential for their mating.

The eyes of birds account for 15% of the mass of their head, whereas in humans, it accounts for only 2%. Also, the retinas present in birds have no blood vessels. This prevents the scattering of light and provides them with far greater visual accuracy than humans have.

The answer would be a resounding no as birds see a greater spectrum of colors and we humans are colorblind as compared to birds.

Do birds have night vision?

Birds have adaptations for the night in their eyes. The large shape of the eye lens, along with the tubular shaped lens and absence of any cones gives birds an unique ability of seeing under low light environments. Birds also have colored droplets of oil in their eyes which can reduce the intensity of light it perceives. However, the retina has a reflective layer which increases the amount of light being received by each photosensitive cell. This allows the bird to see better than most animals out there. The best night vision in birds can be found in owls, followed by frogmouths, nightjars and even some species of hawks.

Night vision for some birds like the owl is a way of survival and gathering food as they are active only during the night. Some species of owls also see far better during the night, using their photosensitive cells which allow them to fly through obstacles with ease. Night vision in hawks has adapted throughout the centuries and they have greater night vision than accuracy than owls. They usually hunt large prey like deer and even cattle during the night, using their strong claws and of course, their excellent night vision. Some birds like the nightjars live inside dark environments and hunt their prey, which can be minute insects, at night. They have the ability to spot tiny insects on the ground from a range of as high as 20 meters.

Thus night vision in birds is much superior than us humans. In situations where one would need night googles or infrared vision, birds can see pretty much more with their naked eyes. Some birds like the German owls, were trained in WW2 to spot enemies in the dark!

What bird has the best vision?

Most birds of prey have excellent bird vision, which enables them to see through long distances. This allows them to spot their prey from far greater heights than what would allow the prey to notice any incoming danger. However, in this category, as we have mentioned before, eagles stand out the most. This is because they can see distances as far as 8 times longer than what humans are capable of seeing. This allows them to focus and spot in on rabbits, deer, and other animals at distances greater than 5 miles. While humans can spot a flame of a candle at a distance, a small animal hidden in the bushes would go unnoticed by us.

Eagles can also change their focus quickly. This allows them to zoom in on their prey from a distance. This works much like the lens of a camera or a mobile phone where you can swiftly zoom in and out at a subject. Eagles can also spot a wide range of colors than humans can. This enables them to spot small changes in the coloration of their prey and also see the UV light emitted by the animal if any.

The Crowned Eagle and the Golden Eagle have the best eyesight among all eagles! They thrive in extremes of weather conditions, high above in the mountains and valleys, where they can spot their prey like deer or sheep, far down below. Some eagles like the Steller’s Sea Eagle scoop down on their prey, usually fish, from heights as far above as 80m from the sky.

What is the best vision you can have?

Birds have extremely good vision. This is required for spotting prey far down on the ground and also being able to navigate under string currents of wind. Some birds such as the kestrel are famous for spotting tiny animals such as rodents, toads and even insects far from above the ground. One study found out that the American Kestrel can see insects of sizes as low as 2mm from a range of approximately 18m off the ground. Others like the Bald eagle can see prey from heights as far above as 50m to 80m. The Grey parrot is known for having an extremely good field of vision and can see very well from the corners of its eyes. The American Goldfinch has tiny eyes but can see 4 times as better as humans can. The Snowy Owl can see perfectly well in snowy terrain along with raging sunlight, which usually reflects off the snow and hurts human eyes, which makes us humans wear snow goggles or sunglasses. The Bar-tailed Godwit can stare directly at the sun without even flinching an eyelid!

Birds are not just known for having long-distance vision. Owls have night vision which enables them to move at high speeds at night and even fly through obstacles with ease. They can see just as well at night as they can in the day. Some species of owls see better at night due to their lens which has adapted to seeing at night. Ducks can spot predators who approach them from behind, just the same way they would see them coming up on the front. They have a wide range of vision and can see very well from the corners of their eyes. They can spot predators sneaking up on them from the corners of their eyes as well as they would see in front. How cool would it be if we humans had this ability?

Birds, therefore, are much reliant on their sense of sight for staying alive as well as finding food. Their eyesight has adapted to their need of finding small animals and also to tackle any adverse situations as best as possible. Their eyesight is therefore one of the strongest found in the animal kingdom. Now you must be wondering which bird has the strongest eyesight? Come in, Eagles! They have the strongest eyesight among all birds and can also see 8 times as far and as better as humans do. Pretty cool right?

Thus, birds are the clear winner among all species on earth, when it comes to eyesight. Their vision has evolved throughout the centuries and has enabled them to thrive in their own little world of survival and food. Recent studies have shown that birds see 10 more colors than humans, which can only be viewed under special lighting and glasses. There is a lot more to find out from our winged buddies and the future is vast and exciting and can lead to new innovations for human eyesight and eyeglasses. this article helps you to gain an insight into the vision of birds, with fun scientific facts. Read here more about another sense, the birds’ olfaction.