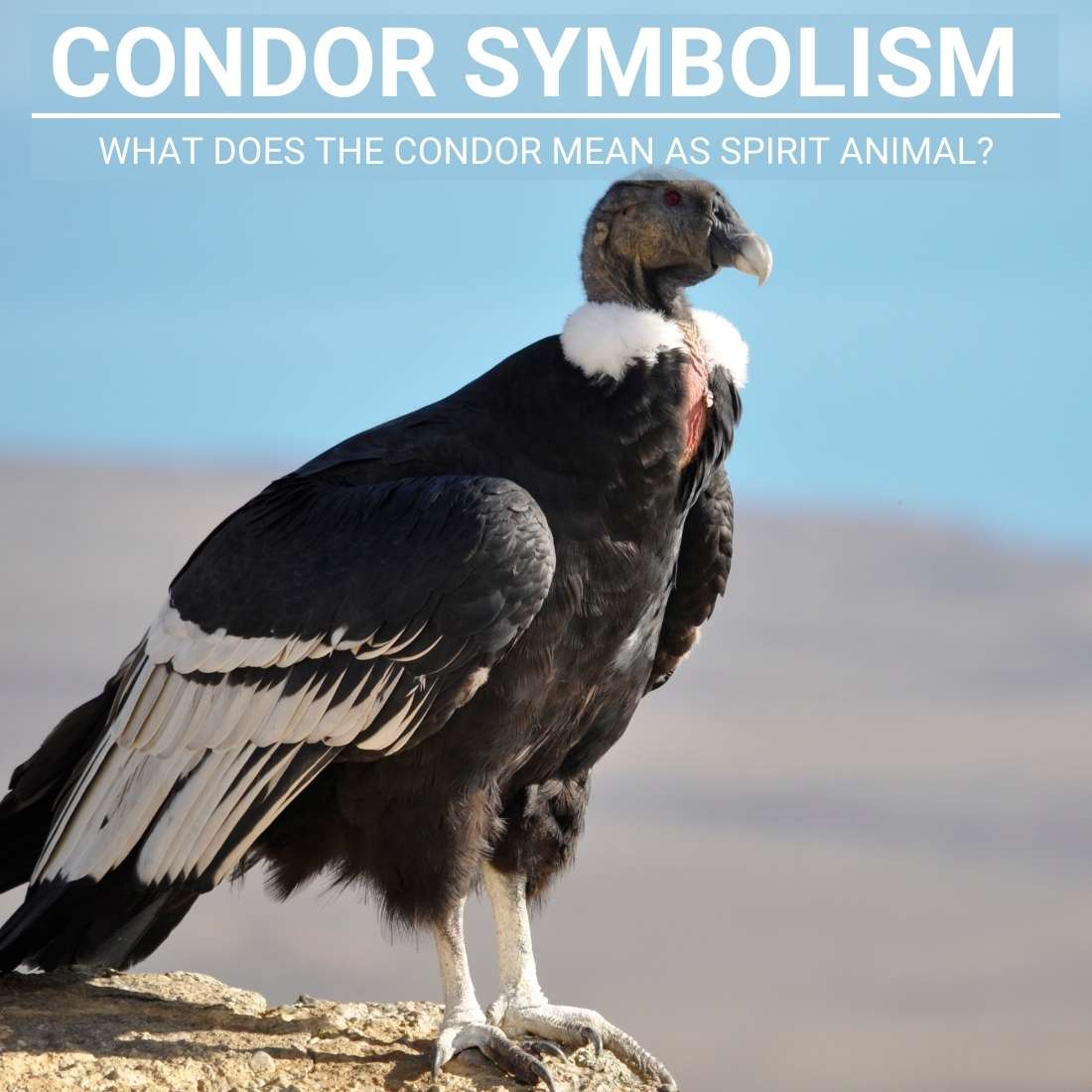 Bald And Beautiful: How The Condor Symbolism Teaches Us That Beauty Is Skin Deep

Known as one of the largest and oldest living birds, the condor is among the most massive flying creatures that are easily recognized for their unique yet intimidating features. Belonging to the family of vultures, these scavengers own the ability to soar for hours without even once flapping their wings.

Revered for being an ancient animal that swoops in with spiritual messages both fascinating and dismal, let’s dive into the interesting condor symbolism.

“A new chill from afar out whither the condor had flown as if my flesh had caught a horror before my eyes had seen it.”

What Does A Condor Symbolize?

Boasting an impressive wingspan that stretches nearly 10 feet, condors are often spotted perched atop the bare rocks of cliffs in high-altitude mountain ranges as they scour the ground for unsuspecting prey or animal carcasses. Majestically and menacingly soaring in the sky to awe and inspire, here is what tradition says about what a condor sighting symbolizes.

Condors are one of the largest birds in the world, and they are often associated with great power and majesty. Condor symbolism can vary depending on the culture, but there are some common themes that run through all of them. For example, condors are often seen as symbols of strength, courage, and determination.

They are also considered to be messengers of change and can teach us about the importance of adaptability in times of adversity. If you have a condor as your spirit animal or totem, you may have some of these qualities yourself.

The Condor is found in North and South America, and there are two species: the Andean Condor and the California Condor. This bird has a long history of symbolism and meaning, which can be traced back to the ancient Inca civilization.

Noted for having heads and necks that are bald and featherless, the condor represents our gift of enhanced creativity and vision. As the male of the species sports a fleshy crest on its crown, it shows our ability to be artistically inspired at any given time. Recognized as an essential part of life, keeping our minds stimulated not only improve our ability to focus but also provides us with ways to communicate and express ourselves.

Uniquely born with their eyes already open, condors indicate our ability see things from different perspectives and to reason with the utmost respect and dignity. From acquiring a knack for listening to your inner voice and feeling more content and joyful to realizing your life’s purpose, these curious flying creatures teach us to follow our instincts for they often make a huge impact in leading us towards a more righteous path.

Never hold your talent back

Frequently spotted regally sitting in the highest places, these enormous birds of prey make use of their exceedingly sharp eyes to catch sight of lunch that often consists of the remains of deer, cow, or sheep. While such a trait does not really promote an appealing symbolism, their presence invites us to be proud of our knowledge and skills for they can serve as an inspiration to others as well as help overcome hardships and adversities.

A flying creature that is widely believed to carry tales as old as time, studies show that condors were already around when saber-toothed tigers roamed and wandered about. Their ability to soar high has made a number of cultures believe that they are a messenger of the Divine in which they are instructed to enlighten us with messages of excellent judgment and wisdom.

While most people would suggest that such a high level of understanding is gained through life experiences, these unpredictable creatures’ presence tells us that it is absolutely easy to secure.

Monogamous in nature, condors stay with a single mate for life. Observed to amazingly share parenting responsibilities equally, their appearance reminds us about the importance of not just staying committed to our relationships but of being an ideal companion through all of life’s worries and discomfort.

Since most of us see loyalty as one of the most sought-after qualities in any kind of relationship, this highly social animal dives in to provide us with faithfulness, stronger connections, and mutual respect.

Regarded as an exceptional forager that can spot a meal from thousands of feet in the air, the condor’s image tells us to be more watchful and observant of our environment. Not only will this help us deter unforeseen risks and threats, but it will also help us grasp its remarkable spiritual messages.

Since they are mostly seen partaking of carrion with their peers, their presence implies our need to belong to a community that can help us handle life’s negativities. However, the manner in which they silently wait for their turn on an animal’s carrion teaches us how patience and serenity bring us success and prosperity.

While most birds are disadvantaged when coming across strong winds, condors remain undaunted and soar even higher because of their enormous and powerful wings. This incredible ability tells us how we too should strive to reach even greater heights when faced with challenges and adversities.

They serve as our motivation to never allow anything to hold us back and to keep on moving forward regardless of life’s challenges and unfortunate luck. Although the idea of a creature that relishes on the remains of dead animals is never viewed to be spirit animal-like, these meddling creatures are perceived in several traditions as a spiritual guide that helps us get rid of everything that is rancid and immoral in our life.

By simply looking at its sheer size and a wingspan that’s nothing short of amazing, it doesn’t come as a surprise that the condor totem represents leadership, bravery, and strength. As it shows a contemplative stance as it patiently waits for lunch, they motivate us to remain persistent and enhance our capacity to withstand the hardships that life throws at us.

Respected as an animal of great strength and wisdom, they provide us with the courage and knowledge to smoothly glide and manage the unpredictability of turbulent and rugged winds.

Flying in with a message of grace and resilience (also read: symbolism for resilience), the condor as an animal totem tells us how being adaptable and kind can help us be accepted by others with great enthusiasm and warmth.

They serve as a gentle reminder that regardless of our appearance and standing in life, presenting ourselves with decency, honesty, and behavior that is worthy of respect, there is no need to act in ways that do not really represent our true selves.

In Inca mythology, the Condor was associated with the sun god, Inti. It was said that the Condor would carry the sun across the sky each day, and it was also a symbol of power and strength. The Condor was also seen as a bringer of good luck and fortune.

The condor is a symbol of wisdom, justice, and strength in many native cultures. They are also seen as messengers that lead you to the afterlife when your time on earth has come to an end.

The Condor is a powerful and symbolic bird that has been revered by cultures all over the world for centuries. If you have a Condor as your spirit animal, you may be blessed with strength, courage, and determination. You may also be called to be a bringer of change and to teach others about the importance of adaptability. Whatever the case may be, the Condor is sure to guide you on your journey through life.

What does it mean to dream of Condors?

Condors generally symbolize good news, success, and abundance. Dreams about Condors can also be a sign that you are about to achieve something great or that you are on the right path in life. If you see a Condor in your dreams, it is a good sign that you should take flight and reach for your goals.

Condors are often seen as symbols of strength, courage, and determination. They are also considered to be messengers of change and can teach us about the importance of adaptability in times of adversity. If you have a condor as your spirit animal or totem, you may have some of these qualities yourself. The Condor is also an important figure in Native American mythology. In some cultures, the Condor is seen as a creator god, while in others it is seen as a spirit guide or guardian.

The Condor is often considered to be a sacred bird, and it plays an important role in many ceremonies and rituals. Dreams about Condors can also be a sign that you are about to achieve something great or that you are on the right path in life. If you see a Condor in your dreams, it is a good sign that you should take flight and reach for your goals.

Whatever the case may be, the Condor is sure to guide you on your journey through life.

While most animals live by the belief that there is strength in numbers, these marvelous creatures chose the unpleasantness of rocky mountaintops and roost away from others. By doing so, they put themselves in a place where they can fulfill their role as an effective messenger to the divine, as well as encourage us not just to overcome our fear of heights but to spread our wings and soar high.

Some condors are on the list of birds near extinction (in particular the California Condor).

1 thought on “Condor Symbolism: What Does the Condor Mean As Spirit Animal?”