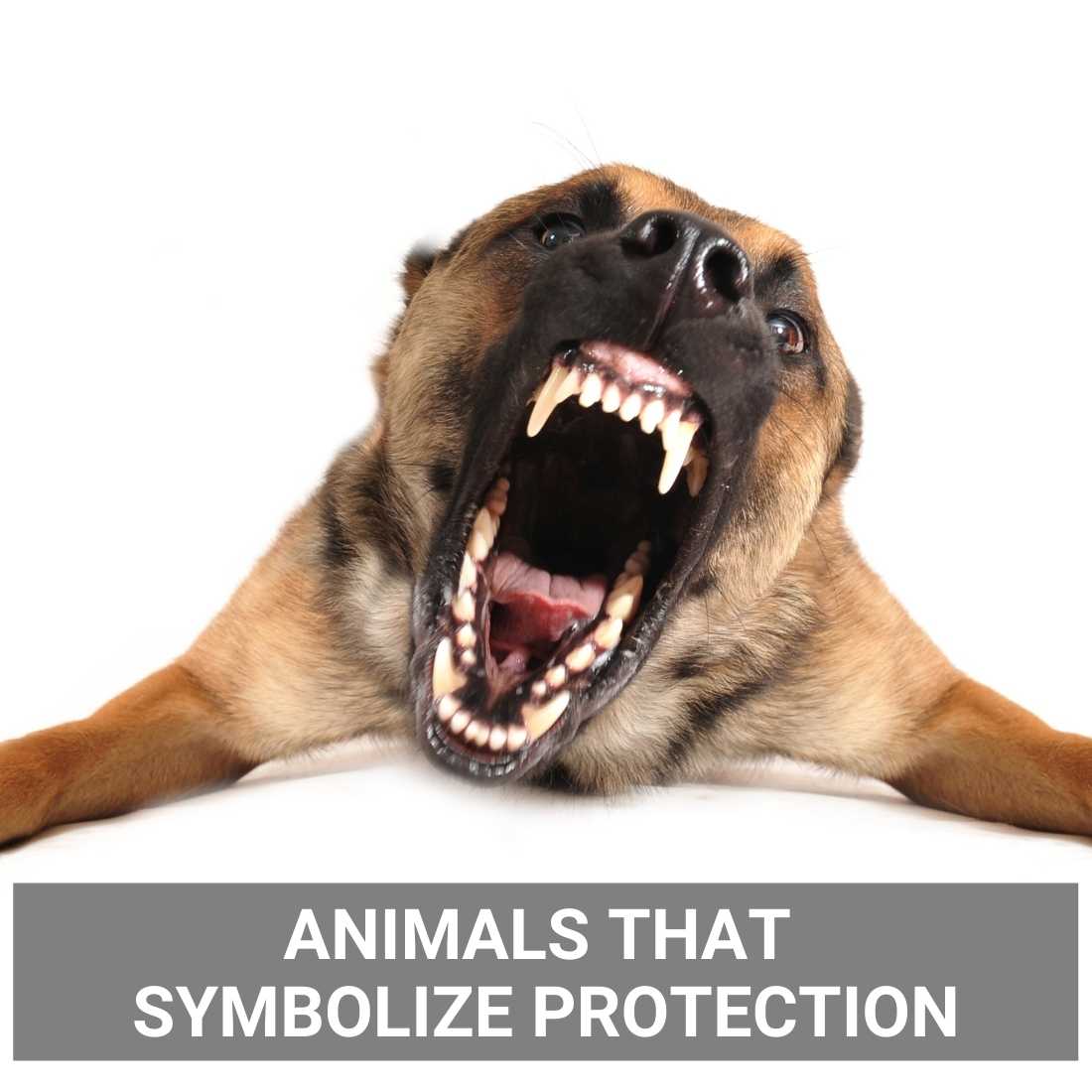 Throughout history, humans have always believed that we held a relatively clear understanding of an animal’s traits and behavior. While the drive to keep each member of the family, regardless of the species, is strong, there are several animals that we associate with the idea of safety, security, and conservation. Playing an important role in both our physical and overall spiritual well-being, here are the top 10 animals that symbolize protection.

Ask anyone who has had the privilege of having a dog for a pet and you’ll easily realize why these extremely lovable and friendly creatures are our top animal of choice to symbolize protection. Territorial, loving, and known for being loyal and protective of their owners, their instincts naturally tell them to keep their human family safe. An amazing figure of playfulness, unconditional love, and obedience, this calm and highly sociable spirit animal will never leave your side come hell or high water.

You can read more about why dogs can be overprotective of their owners here.

While the more common interpretations of this spirit animal are moving at your own pace towards your dreams, focusing on your journey, and being content with what you already have, the thick and sturdy shell that serves as its fortress of solitude easily makes it a popular image of protection. Known to retract into its protective shell in the presence of threats and danger, it symbolizes our need for a space where we can feel absolutely safe and secure. The tortoise is also an animal that represents wisdom.

Respected as one of the largest animals that thrive well on both land and water, this fearsome reptile carries with it some great spiritual symbolism that often appears in times when changes in our lives are about to occur. Featuring an exceedingly thick skin that serves as its protection from potential predators, it also shields us from the destructive and harmful occurrences that may turn out in our path. A spirit animal that owns an acute sense of perception, it guards us against people who hold adverse hidden motives against us.

Adorable, cuddly, yet strikingly dangerous, any attempts to snuggle up with a bear can undoubtedly be fatal. Offering a great deal of importance across various cultures, bears teach us to be strong and confident, as well as to stand up to the countless difficulties that may come into our life. Known to have the ability to respect a certain personal space, they would protect and defend a food source or a mate from any form of risk and intimidation, all while keeping its warm and charming appearance. Read more about the bear symbolism. Swarowski Symbolic Evil Eye Pendant Necklace
4.8
$115.00$75.76
Check on Amazon
The classic cross is among the most widely used protective symbols

A universal symbol of strength, courage, and royalty, lions are perhaps the most favored and respected animals on the planet. While they are known for their awesome hunting prowess, most of us tend to forget about the role these tenacious creatures play in keeping the members of its pride safe. Apart from going on hikes with its young at the break of dawn, it works exceptionally hard to keep away frightful threats such as cheetahs (see our post cheetah symbolism) and hyenas which make the lion not just the king of the jungle but also a wonderful symbol of protection. The lion is also on the list of animals that kill for fun.

A fascinating spirit animal that is often found in thick forests, this remarkably mild animal offers a contradicting symbolism as it can be tame and mild in one second then ferocious and cruel in a snap. Regarded as a symbol of our guardian angels who would often sit quietly and watch over us from a distance, these brave and skilled spirit animals have been recognized in many cultures as an image of a defender, protector, or savior. Also, check out the panther symbolism.

More often seen soaring high up in the sky, the hawk is regarded as a spirit animal that inspires us to be observant of the environment. While it teaches us to develop our gift of intuition as well as the capacity to appreciate the beauty of the environment, this calm yet tenacious bird turns into overly protective parents, particularly when nesting and defending its young. Flying into our lives to deliver important messages from the divine, the hawk spirit animal enables us to spot coming threats to help us dodge or sidestep. Find also our blog post about the hawk meaning.

Highly revered as one of the largest birds that can take flight, the eagle is adored by many as the king of the skies. Soaring majestically while carefully and precisely watching everything that is taking place under its feet, it has made these impressive birds an indication of the care and protection that we receive from the realm of the divine. Strong-willed, independent, and smart, an eagle would glide and drift into our lives to remind us about the importance of keeping our homes and families safe from peril and harm. We also have a post about eagle symbolism.

Perhaps because of their notoriety, snakes have developed a wide range of enemies. From raccoons and foxes to large birds of prey and coyotes, these infamous creatures have, in turn, refined several ways of protecting themselves. While they use their scale’s color to camouflage themselves or their speed to escape from a predator before ever trying to snap at them, snakes have found themselves as an unfamiliar symbol of guardianship and preservation. Huffing, hissing loudly, and rattling their tails to scare away predators from their eggs, these often misunderstood reptiles can be protective of their young much like most animals.

Here’s something about such over-protective snakes.

Providing an instant sense of happiness and delight each time it flies into our presence, we barely notice the protection it offers to plants as it helps keep away smaller insects that feast on the saps of leaves, young shoots, and flower buds. Attractive yet deadly, it is widely known that they emit a foul odor to ward off predators while their brightly colored spots and colors can make any hunter sick if they make the mistake of eating them. Such traits show our ability to avoid potential threats by using our spiritual talents and gifts. We love ladybugs, see our posts: ladybug symbolism, ladybugs in house meaning, dead ladybug meaning.

While allowing the power of our spirit animals to communicate, teach, and guide us opens a path to great wisdom and a better understanding of life, realizing when to become aware of the meanings and symbolism of each animal can be both physically and spiritually beneficial.

As we typically and understandably long for spirit animals that help us build our confidence and bring us to greater heights, the animals that symbolize protection on this list make certain that we reach our goals through their guidance and gifts of protection.

In case you are after even more protection, there are also many jewelry symbols that provide spiritual protection.