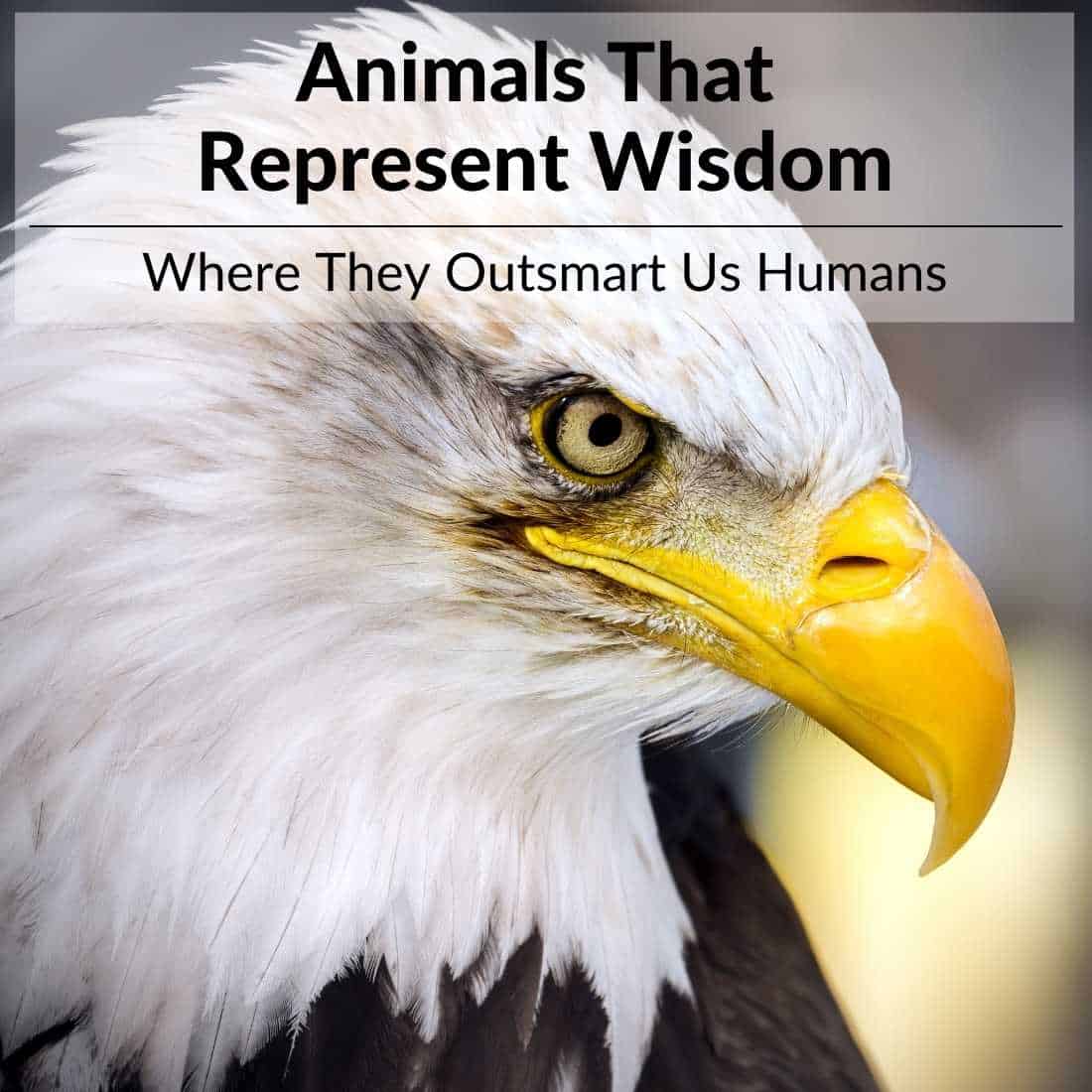 Animals are often used as symbols of wisdom. These animals represent a type of knowledge that can be learned and passed down over generations to new members of the same species. This is how humans have been able to teach one another for centuries, passing on information about how to build shelters, hunt food, and defend oneself against predators.

Experts suggest that these animal symbols emerged from early human cultures in an effort to understand their own world through observation and storytelling.

Just like the people who first invented them, many contemporary representations don’t carry any real meaning or significance anymore – they are now simply a way for us to identify with other aspects of our humanity through story-telling and symbolism. That said, some animals still retain strong symbolic value in modern times for representing wisdom.

Animals that are believed to represent earth wisdom

Any animal that is said to be a sage, or is widely respected for its wisdom, represents earth wisdom. Usually, long-living animal-like tortoises, elephants, snakes, and whales are thought to represent earth wisdom. These animals live a long time, just like the earth does, and they are also very wise.

The turtle is a symbol of longevity and endurance, perhaps because it has survived numerous earth changes through the ages. It is also considered an emblem of Mother Earth. The turtle totem is tough, patient, and enduring as well as adaptable with a sense of balance both in motion and at rest.

Turtles are often slow to anger, but when threatened they can be extremely aggressive. This animal is also a symbol of fertility because females lay eggs and the males (hatchlings?) are born from under the female’s shell.

Elephants do not have the greatest eyesight in the animal kingdom, but they never forget a face. They are said to be able to remember the face of every other elephant they have come into contact with for their entire lives. This would allow them to determine friend from foe, and even tell which elephants had a history of moving in the same social circles.

Elephant wisdom symbolizes balance, strength, and groundedness. They are having a deep connection to the earth and peaceful energies. Elephants are one of the most important animals in Asian cultures which represent strength, power, and dignity.

It is said that there are many things we can learn from the snake. It moves in a very unique way, unlike any other land animal. The snake’s slithering is a beautiful demonstration of harmony and balance, as it leaves behind a pattern in the sand – much like that created by our footprints. In some cultures, snakes are worshipped because they symbolize wisdom and beauty.

Snakes represent earth wisdom because they are also always linked to wisdom, immortality, and fertility.

If you want to know about long life, look at the great whales. The longest-lived mammals on earth are two species of Baleen whales (humpback whales and fin whales). Among baleen whales, they may live over 90 years.

This is one of the animals that symbolize wisdom because whales are believed to be very intelligent and know how to care for their children. They can communicate using deep low sounds that travel long distances under the sea, and they make songs that travel across oceans.

Baleen whales have a unique way of feeding by filtering plankton and small fish by straining seawater through special baleen plates in their mouths. They are also very special because they can hold their breath inside the water for a long time, even up to 90 minutes.

Mythical animals that represent wisdom include dragons, Sphinx, unicorns, Phonenix, Griffin, and Kirin. Some of these stories have been passed down for centuries or even millennia from generation to generation while others resurfaced in the 20th century as a result of various religious movements; however, they all share one thing in common: These animals that represent knowledge and power beyond that of their human counterparts.

In Chinese mythology, the dragon has been known as a symbol of strength and power for thousands of years. They represent wisdom because they are often said to be able to change into other forms or take on human characteristics. In some cultures, dragons are worshipped as gods and goddesses, while in others, they are thought to have magic-like powers that allow them to fly and control the weather.

Also, dragons are important beings, often representing strength, power, good luck, nobility, and wisdom. You can find a dragon in many Buddhist temples because it’s believed that dragons can protect people from evil spirits.

The sphinx was a creature that was known for being both very wise and also extremely intelligent. This creature is often compared to an owl because of its association with wisdom and knowledge, which makes it a symbol of intelligence as well.

In many different cultures, the Unicorn is often seen as a symbol of purity that also represents wisdom. Within religious and spiritual traditions, the Unicorn was thought to be one of only four creatures able to resist the temptations presented by a serpent which is why it is commonly associated with intelligence.

One of the most well-known mythical animals that represent wisdom is the Phoenix. This creature features a long history of representing intelligence in many different civilizations and cultures. In fact, there is an old saying that goes “sitting on the tail of a phoenix,” which can be translated to mean “attaining wisdom by learning.”

The Griffin is often depicted as a creature with the body of a lion and the head, wings, and claws of an eagle. This animal is also associated with strength, speed, and courage, which makes it yet another symbol of intelligence.

In mythology, the Kirin is depicted as an extremely intelligent creature that possesses wisdom and knowledge as well. According to legend, the Kirin was originally a weak creature that would only gain its strength after it bathed in the light of the full moon. It is also said that this creature can walk on water which made some civilizations consider it to be a symbol of intelligence as well.

You can find many different types of animals that represent wisdom in the Bible as well. In fact, some scholars believe that various elements within the stories of Genesis were actually inspired by mythology and folktales from other cultures.

In the Bible, there is a passage that includes some common quotes about wisdom and knowledge, which features an owl in it as well. Although this passage isn’t actually mentioning owls, many people have associated them with wisdom because of their symbolism in various mythologies and religions worldwide.

In the Book of Genesis, the snake is described as being wise and sly, which is why it is often considered to be a symbol of wisdom. Within mythology, snakes are also known for having been great teachers who were able to communicate with humans and provide them with immense amounts of knowledge.

In several different cultures, the crow is often said to be intelligent, clever, and sly. In fact, this creature has been seen as a symbol of wisdom in many different civilizations throughout history which is why it was included in the bible.

In Christianity, horses are most commonly associated with strength and bravery, but they can also represent intelligence at times. In fact, there is a passage in the bible that focuses on the intelligence of horses which is why these creatures are often used as symbols of wisdom.

One of the most well-known animals that represent wisdom in the bible is the lion. In fact, there are several passages in it that focus on how these creatures are intelligent and represent forms of knowledge. The Lion has been associated with wisdom for many centuries now, which is why it can be seen throughout history and even today.

Animals that represent strength and wisdom

In several different cultures, it is believed that horses possess both physical strength and the ability to think rationally, which is why they are often associated with wisdom. During the Middle Ages, many civilizations used horses as symbols of intelligence due to these similarities between them and people.

In Greek mythology, the rooster was said to be an extremely wise creature that could see through the darkness and recognize things for what they truly were. It was also used as a symbol of strength because of its ability to wake people up early in the morning, even when they were sleepy or tired.

As one of the oldest domesticated animals in history, the Bull is strongly associated with strength and courage, which is used to protect its herds from potential predators. However, this creature has also been seen as an extremely intelligent animal that was able to learn how to open gates or drink water from a bucket.

In some parts of the world, dolphins are known as extremely intelligent creatures that are capable of understanding and learning various types of skills. According to a myth in ancient Greece, the dolphin was also said to be extremely wise, which is why it can be seen on various objects throughout history.

Despite being a tiny animal, the mouse is one of the most intelligent creatures in the animal kingdom. In fact, they are capable of remembering up to 20 different places that they can find food as well as about 10 different types of dangers. This is why it was chosen to represent intelligence in Christianity and has been used quite often throughout history as a symbol of wisdom.

Animals that symbolize wisdom and experience

There are also several animals in the bible that symbolize wisdom and maturity. These creatures have been associated with both of these things throughout history, and each one has a form of symbolism related to them:

In some cultures, donkeys symbolize strength and maturity, which is why several stories reference them as a symbol of wisdom and knowledge. This is because these creatures are extremely humble in nature and can work long hours without becoming tired.

As one of the largest and most feared animals in the world, lions are often used as symbols of wisdom because they only make decisions after thinking about them carefully. In fact, it is believed that even their roar can be heard for miles around, which is why these creatures have been associated with wisdom for many centuries.

As a wise creature that is capable of hiding from predators, the quail has been seen as a symbol of wisdom in past civilizations. In fact, it was so intelligent that it would often play dead to avoid danger, which is why this creature can be seen on several religious artifacts and paintings throughout history.

Despite being seen as a creature that is associated with the night, bats are often used as symbols of wisdom and knowledge in ancient cultures. This is because they are extremely intelligent creatures capable of making their own decisions and understand consequences which is why they can be seen on various religious paintings throughout history.

There are many animals in the world that have been commonly associated with wisdom throughout history. However, some of these creatures have a strong symbolism related to them that makes them perfect for worship and reverence. When used as symbols, these creatures can be seen on paintings or other pieces of art that represent wisdom and knowledge, which shows how important they are to ancient civilizations.

These animals can be seen as a form of worship because they offer something that humans cannot. In this case, it is wisdom and knowledge or the ability to make good decisions without being influenced by emotions. However, these creatures are also seen as powerful symbols that represent strength and courage while using their special talents to achieve what they want in life.

Check our series of posts about animal symbolism: “animals that represent…”: