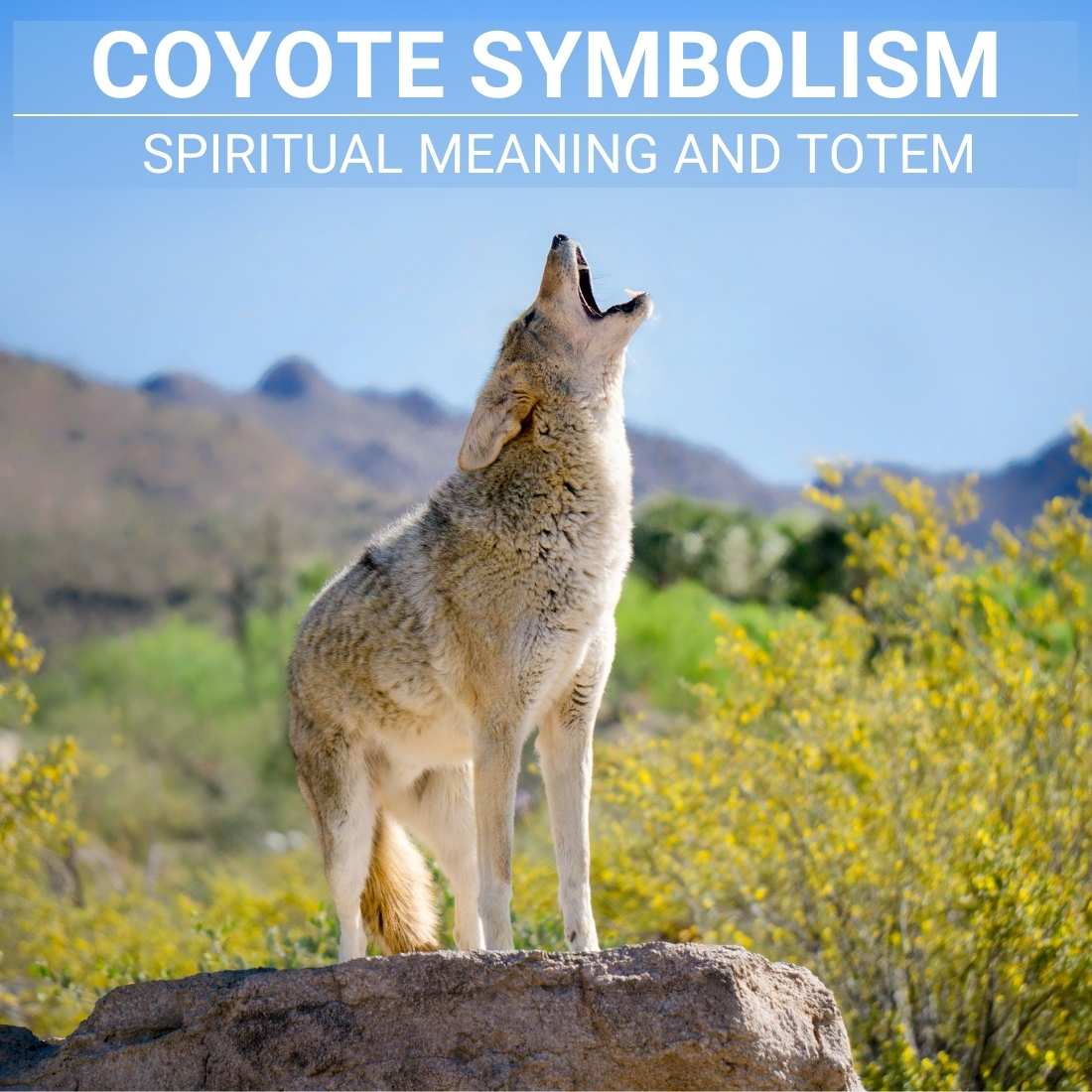 Coyote Symbolism: A Dog With A Few Tricks Up Its Sleeves

Exceptionally adorable as pups in their dens in the ground just to breed into an intimidating and, at times, aggressive adult, coyotes are cunning and highly adaptable creatures that are capable of dwelling alongside people. Measuring to about a medium-sized dog when fully grown, this relatively intelligent hound brings a host of spiritual meanings that may positively affect our spirits, body, and mind. A powerful and almost mystical creature that’s notorious for hunting livestock and pets such as dogs and cats, let’s dig in and find out if the coyote symbolism is indeed magical.

The coyote is a fascinating creature. It has been the subject of mythology and folklore for centuries, and its symbolism is rich and varied. Coyote symbolism can vary depending on where you live, but there are some common themes. Coyote is often seen as a trickster spirit, and as a symbol of transformation. He teaches us to be flexible and adaptable, to roll with the punches, and to find humor in life. If Coyote has crossed your path, it may be time to take a closer look at your own life and see where you might need to make some changes.

What does a coyote symbolize?

Perhaps the most complicated among the canine species, the coyote offers the perfect blend of playfulness, flexibility, and intelligence in its many traits and its meaning. Assertive yet extremely patient, here’s a bit of what these wily creatures symbolize.

Boasting their unique ability to stand and walk on their toes to avoid drawing attention, these naturally nocturnal creatures are viewed by some as a symbol of treachery and deception. While they perform this cunning habit to catch prey and steal food from humans, it is always best for us to stay on our toes each time we are in the presence of a coyote.

Known for using their wit and talent to survive the harsh conditions of the wild, the coyote inspires us to use our skills to realize our true potential. Highly resourceful and is willing to employ deceit to ensnare prey that is bigger than them, this imaginative pooch is no doubt a man’s best friend in times that wisdom and problem-solving abilities are called for.

Remember that test where you get more treats if you can resist devouring one for a few minutes? As one sign of high intelligence is patience, the coyote’s willingness to endure shows how brilliant these animals genuinely are. Taking their sweet time to stalk and pursue their prey until the perfect time to attack comes teaches us to wait for the most suitable opportunity before making our move for it almost always ends successfully.

Observed to be playful with its peers and its young, this complicated spirit animal strikes the ideal balance between having fun and making use of our innate wisdom each time the situation requires. Not only does this remind us about the importance of constantly being alert and ready, but it also points out the spiritual benefits of staying carefree like a child.

Typically regarded as a trickster, a coyote would often trot into your presence as a sign of your need to bring back the joy and laughter in your life. Known to bring about positive transformation, they leap into our consciousness to provide us with joy and contentment, particularly when things are not going very well. Carrying messages from a higher power, an encounter with this amazing animal spurs us to keep a positive mindset and to never lose hope for help is on its way. Highly territorial and protective of its family, these watchful creatures encourage you to be responsible for the path that you choose to take and to face all of its possible consequences. While judgments done without much thought would often have adverse effects, tapping on the coyote’s patience saves us from unfavorable situations and mistakes.

A master of tricks and deceit, the coyote has been observed to appear friendly until it wraps its toothy jaws around your food and steals it away. Such cunningness teaches us to keep our plans and secrets from others since disclosing everything leaves us exposed and defenseless from any form of attack. While these shy creatures do not usually grow into an enormous and frightful size, they instruct us to use our strengths to our advantage. They give us the courage to face our challenges no matter how big and disheartening.

As one of the very few animals to practice co-parenting, a male coyote is revered for having a good relationship with its pups. Those with this awesome hound as their totem animal are known to be committed and loving fathers who put the good of their family ahead of everything. A loyal creature that stays with a single mate for life, the presence of the coyote helps us become faithful and trustworthy partners that offer the kind of love and affection that never wane in the face of tests and trials. By finding joy in everything that they do, the people around them feel their happiness and warmth and are always willing to stay in their presence for long periods.

Sensible and joyful, this animal totem stirs you to take things lightly and to simply laugh and learn from your own mistakes. Noted for its patience and restraint, the coyote inspires us to lead a life of simplicity and to recognize happiness in the presence of our family and friends. As a power animal, this remarkable creature’s playful nature guides us in turning the negative aspects of our life into something more constructive and helpful. Cautious and shy much like a child, they serve as a reminder that by tapping into our fun-loving selves, we can face fresh starts as well as challenges with great ease and confidence.

While our instinct tells us to drop everything and run when we come across them in the wild, a good understanding of what a coyote sighting means might help encourage us to stay still and hold our ground. Although some cultures tell us that an encounter with a coyote during a journey is a bad omen that indicates danger and a need for us to turn back and restart, its presence may only mean that we should simply let go of all our fears and see life in a more positive light. An encouragement to enjoy things from a different perspective, the coyote’s presence signifies that we should enhance our awareness of the events that are happening around us for not only will it give us a better chance of attaining our goals, but also provide us with a more peaceful mind.

Gentle, shy, friendly, and at times strong-willed, Native Americans give their utmost respect to the coyote as they believe that it possesses otherworldly qualities. Trusting that this remarkable spirit animal represents courage, flexibility, intelligence, and foresight, the coyote’s image has been long held to bring progressive energy that offers good fortune, prosperity, and abundance.

The coyote symbolism in different cultures

Indigenous people of America have a different way to look at this animal. Some consider them crafty and intelligent, while others see them as stealthy or even calculator-like in their abilities! The Coyote was a well-known character in many folktales, acting as the trickster. He would teach humans valuable lessons through his actions (usually involving outsmarting someone). The Coyote is also considered a shape-shifter and is often associated with transformation. In some tribes, Coyote is seen as the creator of humanity!

The coyote is seen as a hero or an arrogant, reckless character. Coyote medicine is prevalent among the Pueblo tribes and they are often thought of in terms that have to do with tricksters who bring bad luck but also creativity because it takes imagination for these people who live off hunting other animals like rabbits -to survive on their land so long without being destroyed by humans.

The coyote symbolism in Mexican culture

In Mexico, the Coyote is known as El Coyote and is often seen as a negative figure. He is considered to be a dishonest person who cannot be trusted. However, he is also associated with mischief and trickery. The Coyote is often depicted as being lazy and stupid, but he is also seen as being cunning and resourceful.

The coyote symbolism in China

In China, the Coyote is known as the “Wild Dog” or the “Wandering Dog”. He is associated with greed (read more about the symbolism for greed), gluttony, and laziness. The Coyote is also seen as a symbol of good fortune, however, and is sometimes worshipped as a deity.

In China, the Coyote symbolism is also known as the “Hundred-mile Dog” because it was said that he could run one hundred miles without stopping. Coyote was also said to be able to change his shape and appearance at will. He was often depicted as a human with the head of a coyote, or as a coyote with the body of a human.

In Hindu mythology, Coyote is known as “Bhagavan” or “the Lord”. He is associated with the wind and is said to be able to control the weather. Coyote is also seen as a bringer of good fortune and is often worshipped as a deity.

In India, the Coyote is also known as the “Lord of the Dance” and is often depicted as a human with the head of a coyote, or as a coyote with the body of a human. He is said to be able to change his shape and appearance at will. The Coyote is also associated with death and destruction and is sometimes seen as a bringer of disease or famine.

Meaning of dreaming of coyotes

Dreaming of Coyote can be a symbol of death, but it can also represent new beginnings. Coyote is often seen as a figure who brings change, so if you are dreaming of Coyotes it may be time to make some changes in your own life.

A dream with Coyotes in it may be a sign that you should limit the number of commitments in your life. Or, it could just mean some people will call you “chicken” if they see how fast things are going up for grabs!

Coyotes in dreams may be a sign of good luck, but they can also cause you some problems. These clever canines are adapt to stressful situations and their wittiness allows them to handle any transformation that comes along without so much as breaking an eyelash! If there’s one thing we know about coyotes it’s how tenacious this animal is- which means if something goes wrong or someone takes advantage? You’ll want these guys on your team because not only does his sharp wit help him get through tough times unscathed; having such diligence will make sure all other animals stay safe while hunting during roughest terrain too!

For some, the coyote is simply a wily creature that uses its cunning nature to survive the countless challenges that it encounters in the wild. However, these cautious, playful, and carefree spirit animals come huffing and puffing into our lives as a reminder that nothing can get rid of anxieties, hesitations, and doubt better than a good, straight-out-of-your-heart childlike laugh.