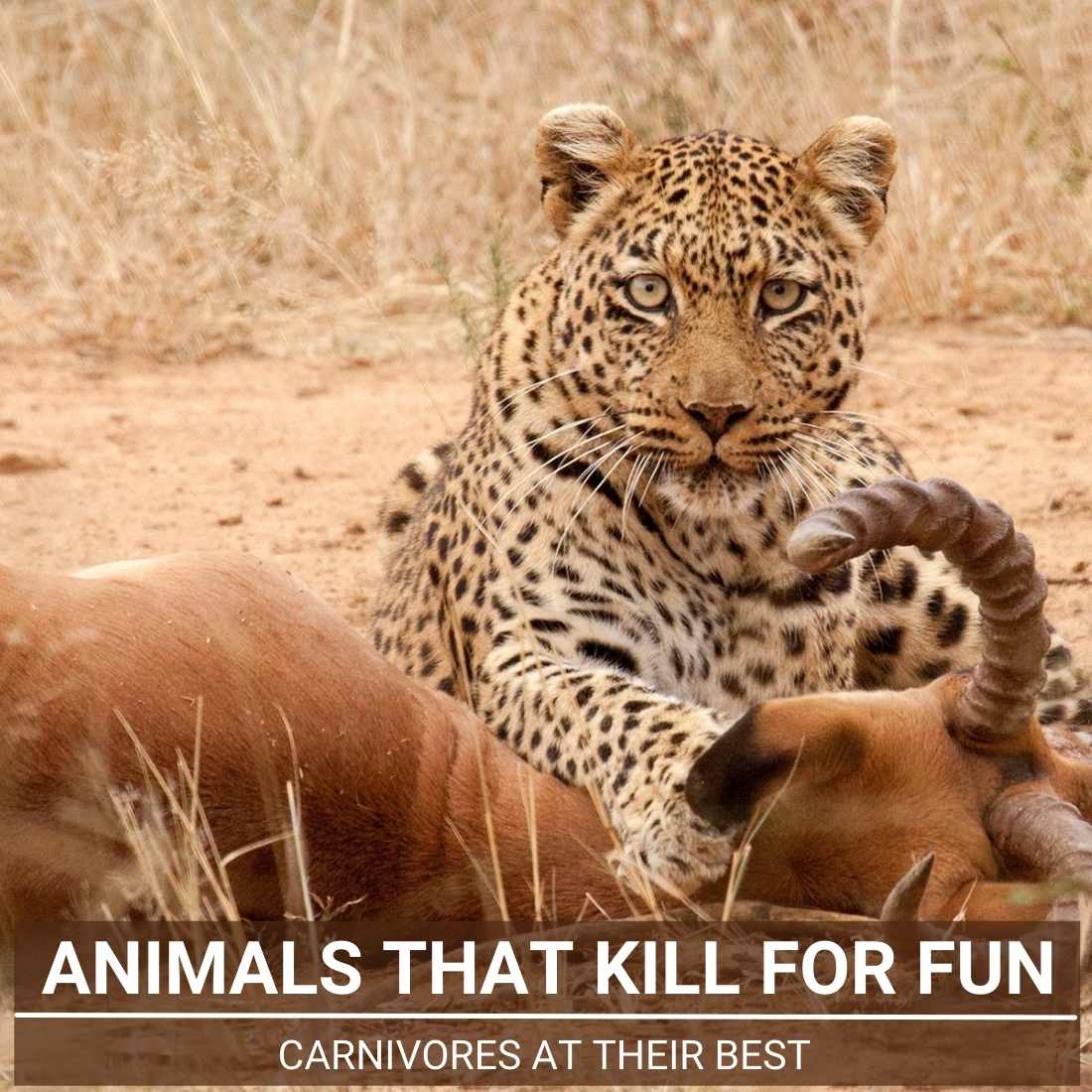 We all know that animals kill for food, but what about animals that kill for fun? These ten animals are some of the most ferocious carnivores in the world, and they take great pleasure in killing their prey. From lions to tigers to sharks, these predators will stop at nothing to get a meal…or just to have some fun!

For an animal to be considered a bona fide predator, it has to be one that hunts, catches, and then feasts on another animal. However, several animals would act as a beast of prey and kill just to acquire food for their offspring to ensure that they have a meal for when they need to eat again or to obtain some useful hunting experience. As scavengers are often frowned upon, particularly in the animal kingdom, let’s hunker down and scour for animals that kill for fun.

“There’s more to being a king than getting your way all the time.”

Are there any animals that kill for fun?

The short answer would be yes.

While hunting can be both risky and difficult, there are times when predators are observed to kill more prey than they need to eat. Commonly referred to as “surplus killing,” several animals would kill in excess not only to allow other members of their group to be fed but also to sharpen their hunting techniques. Although it would require predators to exert more effort to overwhelm prey in huge numbers, such a slaughter becomes a beneficial learning activity for the hunter as it enhances their skills for when the more challenging hunt takes place.

Treacherous and can at times be fatal, this habit of hunting for fun from even the most ruthless and anti-social animals is simply their survival instinct kicking in as it helps refine a predator’s snagging skills and ensures that they have a hidden cache to devour for later when food is insufficient.

Are mammals the only animals that kill for fun?

Whether it’s over a territorial dispute or a female insect eating a male before, during, or after they mate, many species would routinely kill another for reasons that go beyond filling a grumbling tummy. From bears, wolves, hyenas, and leopards to several birds of prey, this extraordinary hunting behavior is rife in the animal kingdom and is not exclusive to mammals only. While lions and non-human primates like lemurs and monkeys (read more about the monkey symbolism) rank at the top of the surplus killers’ list, many species such as sharks, spiders (see our post spider symbolism), and even the mantis are known to intentionally kill creatures of their own kind.

A common occurrence throughout the animal kingdom, battling over a mate, protecting an offspring, and the lack of available resources, it is generally known that creatures of the same or differing species would meet their end at the hands, claws, jaws, and teeth of a much stronger rival.

10 animals that kill for pleasure

From the most dominant mammal to the extremely cunning reptile, there are a handful of animals that kill for reasons other than food consumption. As most of us understand that everything that takes place in the animal kingdom has a purpose, it is quite a shock to learn that some would slaughter their mates for no substantial reason. Here’s a quick look:

Have you seen Walt Disney’s The Lion King? Not only is it one of the highest-grossing animated films of all time, but it also shows the nature of lions to try to get rid of the cubs of other males for reproductive purposes and to gain recognition (obviously the lioness defends the cubs fiercely). Known to strategically kill cubs of hyenas and cheetahs (see our post cheetah symbolism), research has shown that these enormous cats enjoy going on a killing spree when prey is abundant without the purpose of feeding on them.

Regarded as perhaps the most sociable and intelligent animal in the sea, these naturally sensitive and peaceful creatures are capable of putting together a group to gang up and kill other marine mammals. Rumored to be feared by sharks, they defend their territory with absolute firmness, all while flashing a smile and giving high-fives to friendly tourists.

A native only to Madagascar, these wet-nosed and wide-eyed primates could go as far as distracting their mates to create an opportunity to launch their offspring from a tree to ensure his hereditary line. Highly sociable but tends to become aggressive, this gutsy creature would go to such measures just to turn up the female in their species’ heat.

Considered as one of the most notorious serial killers of the animal kingdom, foxes are known for annihilating entire henhouses in search of the perfect prey. Generally friendly and are rarely a threat to humans and their pets, you need not worry about them jumping over your fence as long as they don’t sight your big fat hen. Also check out our post about fox symbolism.

While getting your young ready for a hunt is essential to the survival of animals, the orca is known to decimate groups of penguins or sea lions just to show their offspring how to efficiently get it done. Revered by ancient sailors as a whale killer, these playful and affectionate monsters of the sea got their monicker for hunting and preying on the much larger ballenas of their species.

A highly intelligent bird that knows a thing or two about mimicry and disguise, these sociable creatures are known to send eggs of other birds over to the edge of the nest and force the host bird to take care of their chicks. Refusal would often lead to the death of the host bird as the mother cuckoo bird is known to possess an infamous temper.

Fast and strong, this highly combative fish has the grit to overpower other water creatures in pursuit of its prey. Armed with many large, sharp teeth and aggression that just won’t quit, this destructive predator has been observed to kill small fish and squid just for the thrill.

Typically monstrous and are seen hunting with a pack, these territorial animals are more than willing to attack and kill gazelles, lions, and even other hyenas to protect their food sources. Much bigger and bulkier than a regular dog, they have been observed to physically assault and then leave injured animals to die simply because they can, which is really nothing to laugh about.

Much like most animals, leopards are known to kill prey for survival. However, these otherwise affectionate animals can get extremely aggressive in a snap and overwhelm large numbers of livestock and leave them untouched. Since its strength and speed make it seem effortless for them to devastate extra prey and drag them for later feeding, ravaging through weaker animals for no reason has turned them into frightening killing machines. Read more about the leopard symbolism and also check our post jaguar symbolism.

Playful, charming, and always ready to snuggle, cats are known for being mindless natural killers. Apart from their affinity for bright red lights, they get a knack from pawing, catching, and toying with a mouse until its death. With a sick habit of tearing a mouse open and leaving it for its owner as a present, it sure is a sign that an adorable serial killer is purring in your midst (if you came across a dead cat, read about our dead cat symbolism or read about the poor mouse symbolism).

Chimps are often seen as cute and cuddly animals, but these great apes can get very aggressive. Over the past few years, studies have shown that wild chimp’s favorite pastime is eating other chimps! One of the most common predators in Africa, chimpanzees are not to be taken lightly. These animals can kill with their bare hands, and they often do so for fun. They will take down prey much larger than themselves, and they enjoy the act of killing as much as eating the meat.

Chimps are a social species that live in hierarchies. When one chimp feels revenge for an open dispute, they’ll rarely stop until the other party is dead! Even baby chimps are killed and also eaten.

These small, weasel-like animals are not to be underestimated. They may look cute and harmless, but stoats can kill prey much larger than themselves with ease. They often do so for fun, and they take great pleasure in the act of killing.

Little penguins in Tasmania are being endangered by a single dog attack. 58 of them died and more than 100 were injured, some critically so it’s important to take care when your pet dies or you could be liable for their actions if they come back at night with revenge on their minds!

In the wilds of Australia, one fox was recorded as having killed over 74 penguins in just a few days. The creature ate almost nothing but its prey’s flesh and bones while it waited for them to die!

What a terrible tragedy! It is said that one leopard in Cape Province, South Africa killed 51 sheep and lambs within the space of just ONE INCIDENT. The devastated farmers are now looking to build bigger pens for their livestock as they try frantically trying to find ways to prevent any more losses from happening again.

Ranging from the lack of resources to territorial and mating purposes, animals need to kill prey for them to survive. While killing another animal for reasons other than food consumption puts a predator in a nasty and vicious light, many of them practice surplus killing for sport and to simply show their might. Although it is undoubtedly disgusting, unpleasant, and murderous, you just can’t teach a lion not to play with its food and expect to survive.