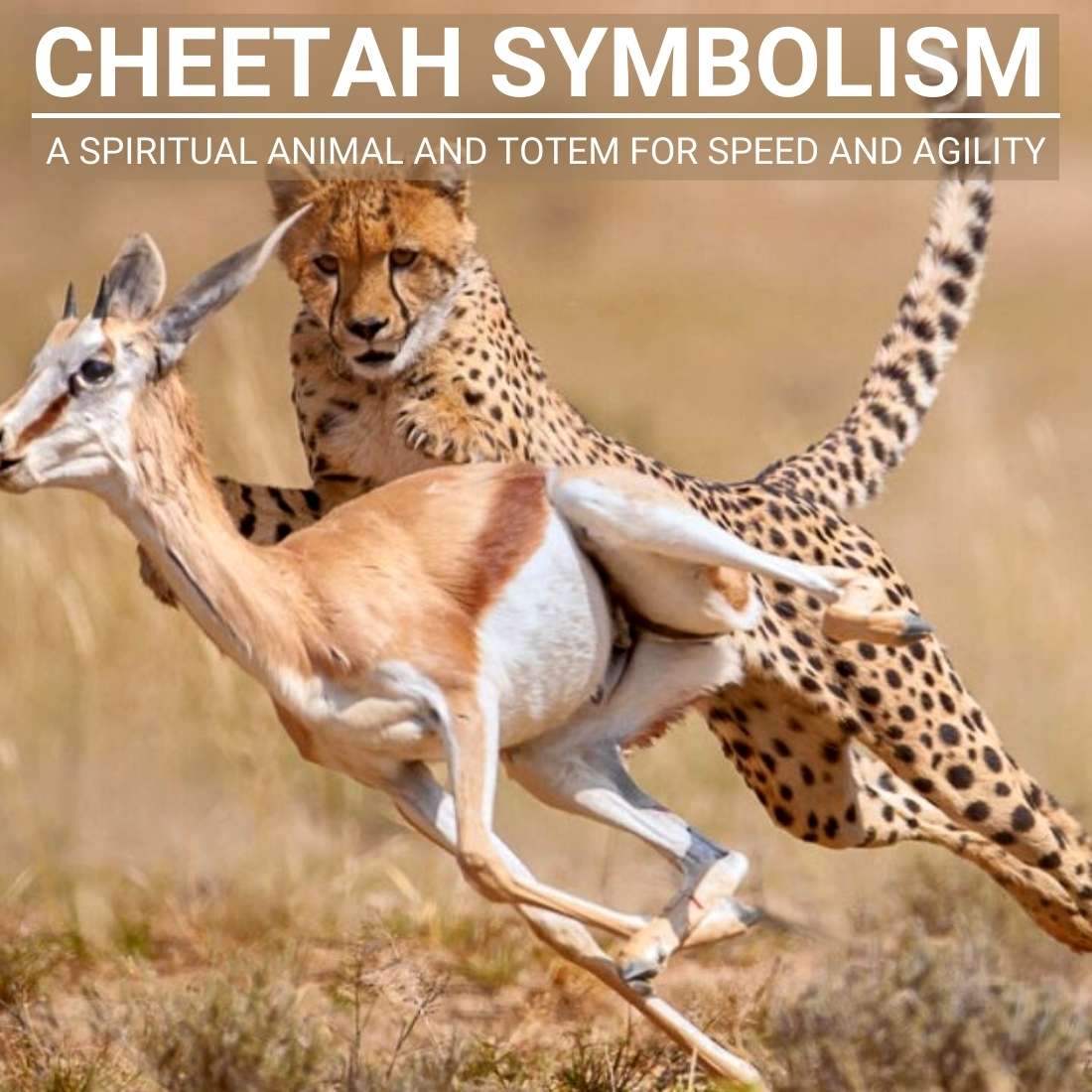 Cheetahs are one of the most fascinating animals in the world. They are known for their speed and agility, which is why they have long been considered a symbol of power and grace. cheetahs have played an important role in many cultures throughout history, and their symbolism varies depending on the culture. In this blog post, we will explore the spiritual meaning of the cheetah and discuss how this powerful animal can help us live our lives with more grace and agility.

Cheetah Symbolism – The epitome of speed…

Cheetah symbolizes focus, bravery, and control. It is one of the fastest land animals. The wild cat’s predatory instincts preach prompt, and the art of action. In short bursts of the sprint, it can chase down its prey. If the cheetah is your spirit animal, you develop patience and composure in demanding situations. As it injects a sense of control in you as you develop confidence in your abilities.

“Have the will of a tiger, the speed of a cheetah and the heart of a lion.”

What does the cheetah symbolize?

Undetected and making its move with undeterred stealth – the cheetah is one of the most elegant predators in the animal kingdom. It is the king of adaptability as it masters its environment. Over the millennia, the cheetahs have developed flexible spines and long legs for higher speeds. To fuel their short fast sprints, they have large lungs and nostrils. This allows them higher oxygen intake. Moreover, a cheetah can stay hidden with its camouflage for long periods. It knows when to make its move and lashes upon its prey with an element of surprise. If a cheetah is your spirit animal, you will find various traits in your character.

Embedded with rich black dots on its thick brown skin, the cheetah is known for its bravery. Without the slightest hesitation, the big cat runs at its prey with no fear. This certainty instills fear in its prey. If a cheetah is your spirit animal, you shouldn’t be afraid of taking challenges and facing things head-on. Moreover, if you are certain of success, you will always have an upper hand over your opponents.

Do you find yourself losing focus more often? The cheetah symbolism focus and deterrence with its unmatched composure. It chases down its prey in seconds with brutal acceleration. So, even if you aren’t physically strong, you can still get things done. Just like a cheetah relies on its speed rather than strength. Cheetah also symbolizes the importance of flexibility while at high speed. With cunning accuracy at speeds as high as 240 mph, a cheetah inspires you to develop quick thinking. Therefore, even if you are working around things fast, you should still revise your strategies if needed.

Stealth – an element of surprise

Beware of walking in the wild, there is always a cheetah right in front of you that you can’t see. As it perfectly blends with its surroundings due to its powerful camouflage. Using this, it quietly observes its prey and analyzes the odds. Once the right moment arrives, the cheetah unleashes upon its prey with an element of surprise. If the cheetah is your spirit animal, it’s a sign that you should learn when to take action. It also symbolizes doing the hard work in silence and not giving anything to your opponent. Working in silence can help you hide your weaknesses so no one can use them against you.

Be it a cheetah chasing its prey, or you chasing your dreams, it’s impossible to succeed without confidence. Cheetah symbolism teaches you to have confidence in your idea or dream. It inspires you to inject a sense of certainty into everything you do. This can help you have a strong belief in yourself. With a strong belief, you are much more motivated to achieve your goals in life.

A symbol of selectivity

With all its elegance, a cheetah is a choosy beast. It likes its food fresh. It’s also known to be selective with its friends. Mostly, cheetahs go hunting alone or in pairs. So, the cheetah symbolizes selectiveness with whom you share your secret. It also teaches you to be various of the people around you and who you trust.

Have you been seeing cheetahs in your dreams more often? Or if you are seeing cheetahs a lot in your life, it indicates that the Cheetah spirit animal is trying to reach out and provide guidance. So, what does the cheetah symbolize spiritually? And what does it want to convey to you? Following are some of the spiritual benefits of having a cheetah as your spirit animal.

A cheetah teaches you that your goals are important. If you want a great future, you must work for it today. As cheetah preys so it has enough food to survive. Likewise, being good at time and resource management is crucial to succeeding in life.

Holding onto the opportunities

With speed, accuracy, and the power of taking initiative, the cheetah symbolism inspires you to beat your procrastination. It tells you to stay motivated and don’t fall prey to laziness. A cheetah timely acts when it’s time for action. So, if you delay things, you might even miss your prey. Hence, cheetah spiritually empowers you to take action in life.

Taking a step back

Before storming on its prey, the cheetah maintains a poetic stillness. This is the calm before a storm. It is the strategy you should implement before going for anything big in life. Sit down, contemplate, devise a plan, and gather your energy. This will allow you to go much further without burning yourself out. It will give your opponents no chance to stand in front of you.

The cheetah totem spirit animal symbolizes speed and precision. However, it also symbolizes flexibility and adaptability. If you are all work and don’t give yourself a break, you can burn out sooner. Cheetah symbolism teaches you to get things done without going too hard on yourself.

Another prominent trait of the cheetah is independence. It doesn’t rely on anyone else to hunt for it. A cheetah is courageous and brave. It is independent of its needs. So, having a cheetah as your spirit animal means that you should learn to be self-sufficient. Although, there is nothing wrong with getting help, over-relying on others can hinder your growth.

The meaning of dreaming of a Cheetah

When we dream of a cheetah, it can symbolize a number of things. This animal is often seen as a representation of speed, agility, and power. Dreams about cheetahs can also indicate that we are moving quickly through a situation or period in our lives. The cheetah can also be a symbol of hunting and prey. If we see ourselves as the cheetah in our dreams, it may suggest that we are feeling predatory or dangerous.

Alternatively, if we see someone else as the cheetah, it may represent feelings of being hunted or preyed upon. In either case, the cheetah dream can be interpreted to reveal what is happening in our lives on an emotional level.

The Cheetah is a speedy and powerful animal. When you dream about this feline, it means that an enemy may be trying to take away your freedom or power- both physically as well mentally which will make them difficult foes for any dreamed opponent! However if one were able to win against the other in battle then they’ve overcome their personal obstacles to successfully defend themselves from harm’s way.

The cheetah is a powerful animal that can help us to access our own personal power. This creature represents speed, agility, and grace. When we work with the cheetah energy, we can learn to move through life with ease and flow. We can also use this power animal to help us to hunt down our goals and achieve success.

If you are looking for a new power animal, or are simply curious about what the cheetah totem can offer you, consider working with this creature in your meditation and visualization practice. Invite the cheetah into your space, and feel its energy enter your body. Allow yourself to be filled with the cheetah’s power, and then use it to achieve your goals.

Cheetah is the animal of high-energy moments. When you need a quick boost, Cheeta helps to get things done and then slows down so that your body has time for rest before taking on new challenges again!