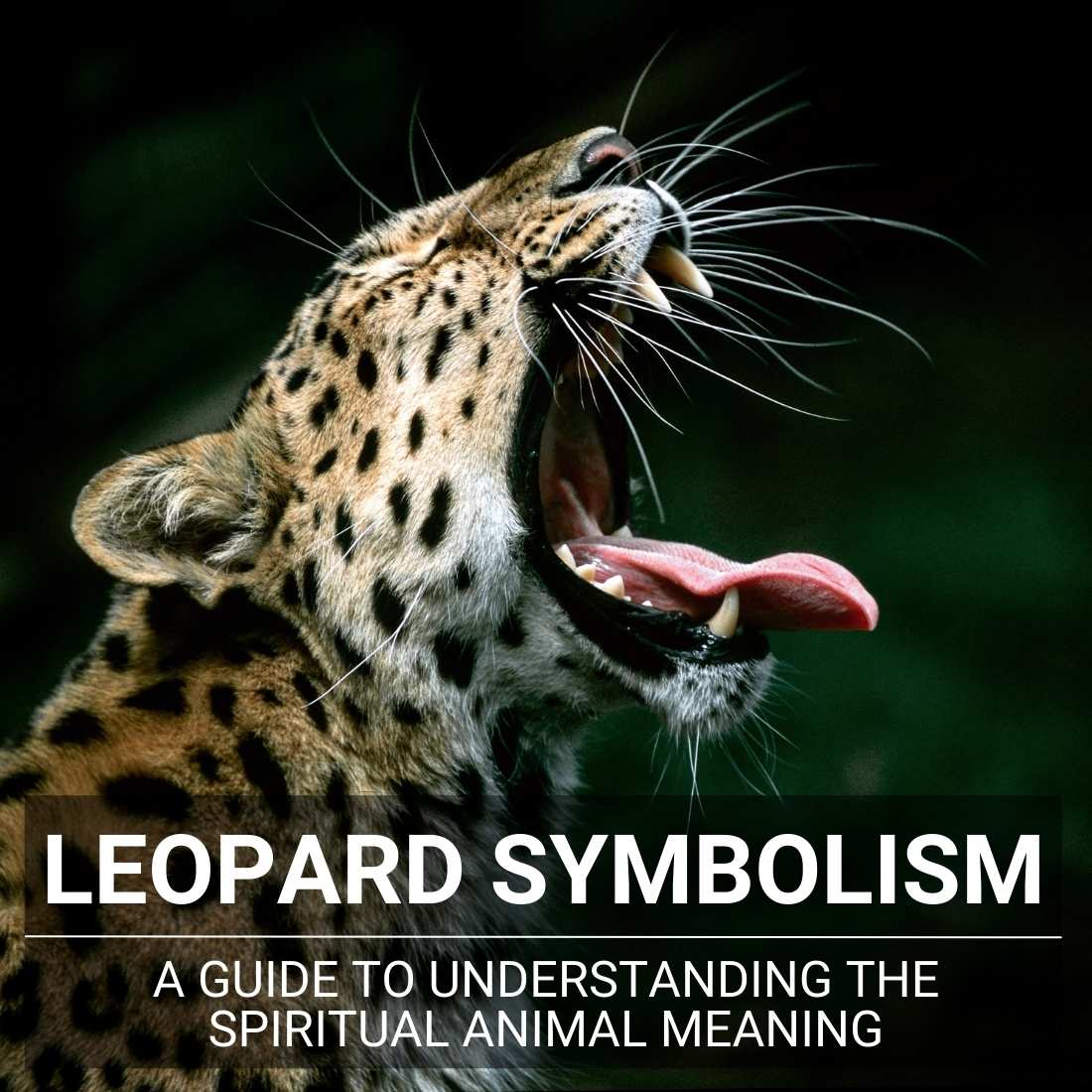 Why These Elusive Felines Are The Cat’s Pajamas

Known for the unique spots in their bodies and their relentless hunting tactics, leopards are among the big cats that carry spiritual meanings and messages that we can take advantage of to better improve ourselves. Considered as perhaps one of the most elusive and reclusive animals in the wild, these graceful predators are a perfect blend of strength and intelligence which makes them an extraordinary spirit animal to have in your life. An incredibly athletic nocturnal animal that possesses an amazing ability to climb trees and see well even in the darkest condition, let’s lurch into the fascinating leopard symbolism.

“A leopard licks its spots, black and white.”

What does a leopard symbolize?

Recognized as the smallest of all the big cats, leopards hold a certain charm for their awesome ability to climb trees and for their unusual spotted fur. Moving silently and with great caution before pouncing in on an unsuspecting target, these magnificent yet extremely dangerous wild cats dart into our presence with symbolism that will make you leap in reverence.

Capable of reaching speeds of up to 60 km/h, this secretive animal helps us jump in and out of certain situations that may bring heartbreak and sorrow if we are not careful. The leopard would often lunge into our presence to remind us about the importance of being watchful of the current situation that you are in, and that you simply need to rely on your God-given talents to lead you in the right direction.

Gifted with a phenomenal ability to easily climb the largest trees with prey securely locked in their jaws, it isn’t any wonder why these tenacious creatures are revered as a symbol of strength. Attacking and hauling prey that is often bigger than them, indicates our capacity to overcome challenges that we deem overwhelming at times.

Powerful and vigorous, the leopard can stealthily wait in the dark and swoop into action, making them an ideal symbol of flexibility, dominance, and energy. An expert hunter that uses its keen sense of sight and hearing to stalk and catch dinner, they signify the value of using the environment as well as our talents to carve our path towards success.

From its remarkable hunting techniques to the way it stays clear of danger, a leopard’s wit and intellect are essential for its survival. Since life in the jungle can be harsh and is not for the weak of hearts, these secretive and cautious big cats call for us to tap into our intuition and our ability to think fast if we are ever going to thrive.

Easily recognized for the gold and black patterns in its fur, the presence of a leopard is undoubtedly a sight to behold. Known to brandish spots that are never alike, it represents the unique grace and charm that each of us possesses and how we should wear them with elegance, poise, and confidence.

A well-known advocate of physically distancing yourself from the rest of your species, the leopards is the intensely territorial creature that claims their domain using urine, claw marks, and feces. Observed to sleep on the highest tree branches away from any disturbance, this relatively energetic and assertive animal encourages us to never be afraid to face our challenges albeit by our lonesome.

Labeled as the “Ghost of the Mountains,” the snow leopard lives and prospers in the frigid ridges of central Asia where temperatures can drop to as low as -40°C. Equipped with long thick fur, these elusive and solitary big cats bring along leopard symbolism and messages of freedom, courage, elegance, and focused silence. Exceptionally rare and, sadly, endangered, they create their sanctuaries in rugged caverns which makes their uncommon presence even more astonishing and attractive. Often seen sporting light gray fur with black spots that help camouflage them in their natural habitat, they inspire us to give great value to our capacity to be mindful and observant as it allows us to recognize the opportunities as they present themselves.

Equipped with a notably long tail which they use as scarves at times, they have been regarded in several cultures as a symbol of protection and self-reliance. Since they consider the peaceful mountains of the Himalayas as home, the snow leopard is believed to have a close relationship with the divine that grants them a stronger intuitive ability. An animal that represents mystery, determination, and silence, this intelligent creature’s nature of moving obscurely towards its prey tells us that we, too, are capable of keeping our heads low as we pursue our goals.

A lethal hunter endowed with speed, agility, and strength, leopards are no doubt an intimidating figure is seen in the wilds. However, these impressively athletic creatures are a force of nature to reckon with if you are fortunate enough to have them as your spirit guide. Using only their instincts to hunt and to keep away predators, the leopard instructs us to listen and to trust our intuition for it would often lead us to the safest and most beneficial paths. As they have the wonderful ability to survive in both dry and wetlands, they inspire us to be flexible and to adjust to the various circumstances that we may have to face.

Regarded as one of the most fascinating animals on the planet, the leopard’s almost rhythmic walk and one-of-a-kind pattern signify the natural beauty and elegance that you possess within. Not only does it remind us why it is important to embrace our particular traits and individuality, but it also serves as our motivation to constantly present ourselves with confidence, dignity, and pride.

Much like most big cats, the leopard symbolism inspires both strength and beauty. An image of courage, grace, and mystery, these insightful creatures inspire us to be conscious of the events that are happening around us and that we should always remain in tune with nature and the environment. Using their fur for camouflage, these well-disciplined creatures encourage you to trust in your instincts and to be comfortable and confident of your abilities and skills.

As a night-dwelling animal, the leopard tells us that we can get through the darkest phases of our lives and turn any difficult situation into something that is beneficial and favorable by patiently listening and heeding our intuitions. An unmistakable image of speed, power, and flexibility, your fondness for stealthy sneak attacks, and getting things done without catching anyone’s attention make it particularly necessary for everyone to keep a watchful eye on those who have the leopard as their totem animal.

What does the leopard animal totem mean for you?

If you have the leopard as your animal totem, it means that you are a powerful and adaptable individual. You have the ability to take on anything that comes your way. You are also a natural leader. People are drawn to your strength and confidence. When it comes to love, you are passionate and intense. You know how to have a good time and enjoy life to the fullest. If you have this animal totem, it is important to use your power wisely. Remember to stay grounded and humble. The leopard is a reminder that we should all live life with grace, strength, and power.

The leopard is a powerful animal that has been revered and feared throughout history. In ancient Greece, the leopard was associated with the god Dionysus. This god represented wine, fertility, and parties. The leopard was also seen as a symbol of strength in Roman culture. It was said that leopards could take down prey twice their size.

In Africa, where the leopard lives, the leopard symbolism means royalty. This is because leopards are one of the few animals that can live in both forests and deserts. They are also very adaptable creatures. African shamans believe that the leopard is a spirit animal that can teach us how to be successful in life.

The leopard is a powerful animal that many African people revere for its courage and tenacity in the attack. Only men of high social standing may wear the skin of this magnificent creature as their totem, which also makes it an ultimate symbolizing power because only those who possess great worthiness hold such privilege with having such markings on them!

The ancient Egyptians had a love/hate relationship with leopards. They associated the black panther-like animal as one that could bring them good luck or bad, depending on how you viewed it; but they also sacrificed these cats in order to ensure stability during times of war and chaos – just like what happened when Greece’s holy people did too! In addition, both Set (their god)and Seshat were often depicted wearing fur coats made from leopard skins which may have been why so many priestesses thought this would keep evil spirits away…or maybe not?

The Chinese also have a long history with the leopard. In Chinese culture, the leopard is seen as a symbol of good luck. The leopard is also associated with the element of fire. This is because leopards are known for their fiery temperaments.

What it means to dream of Leopards

If you have seen a leopard in your dreams, it may symbolize power, strength, and courage. Alternatively, it may represent danger, aggression, and violence. It all depends on how you feel about the leopard in your dream. If you feel scared or threatened by the leopard, then it may be a warning to watch out for dangerous people or situations in your life. On the other hand, if you feel drawn to the leopard, then it may be a sign that you need to tap into your own power and strength.

The leopard is a powerful animal that stands firm in the wild. It’s no surprise then, that when this majestic creature appears as part of your dream it can indicate to you just how fearless and successful we really are without relying on others for help or support!

When you dream of leopards, it can also symbolize your primal instincts. The leopard is a wild animal that is not afraid to show its teeth. This can be a reminder for you to trust your gut instinct and follow your heart.

Leopard symbolism also means transformation. The leopard is known for its ability to change its spots. This can be a sign that you are going through or about to go through a major life change. It may also be a reminder for you to stay flexible and adaptable in the face of change.

The next time you see a leopard, take a moment to appreciate its beauty and power. And if you see one in your dreams, take some time to reflect on what it might be trying to tell you.

A unique creature that flaunts incredibly attractive coat patterns, the leopard is one big cat that you just can’t ignore. Mysterious, stealthy, and elusive as it is, the leopard symbolism undeniably carries a pack of meaningful messages that makes these fearless, confident, and dignified large felines the cat’s meow.

The term panther is usually used to refer black or dark coloured breeds of leopards and jaguars (also check our post jaguar symbolism). It is not a distinct species, unlike leopards. So, click the link if you want to know more about the panther symbolism.