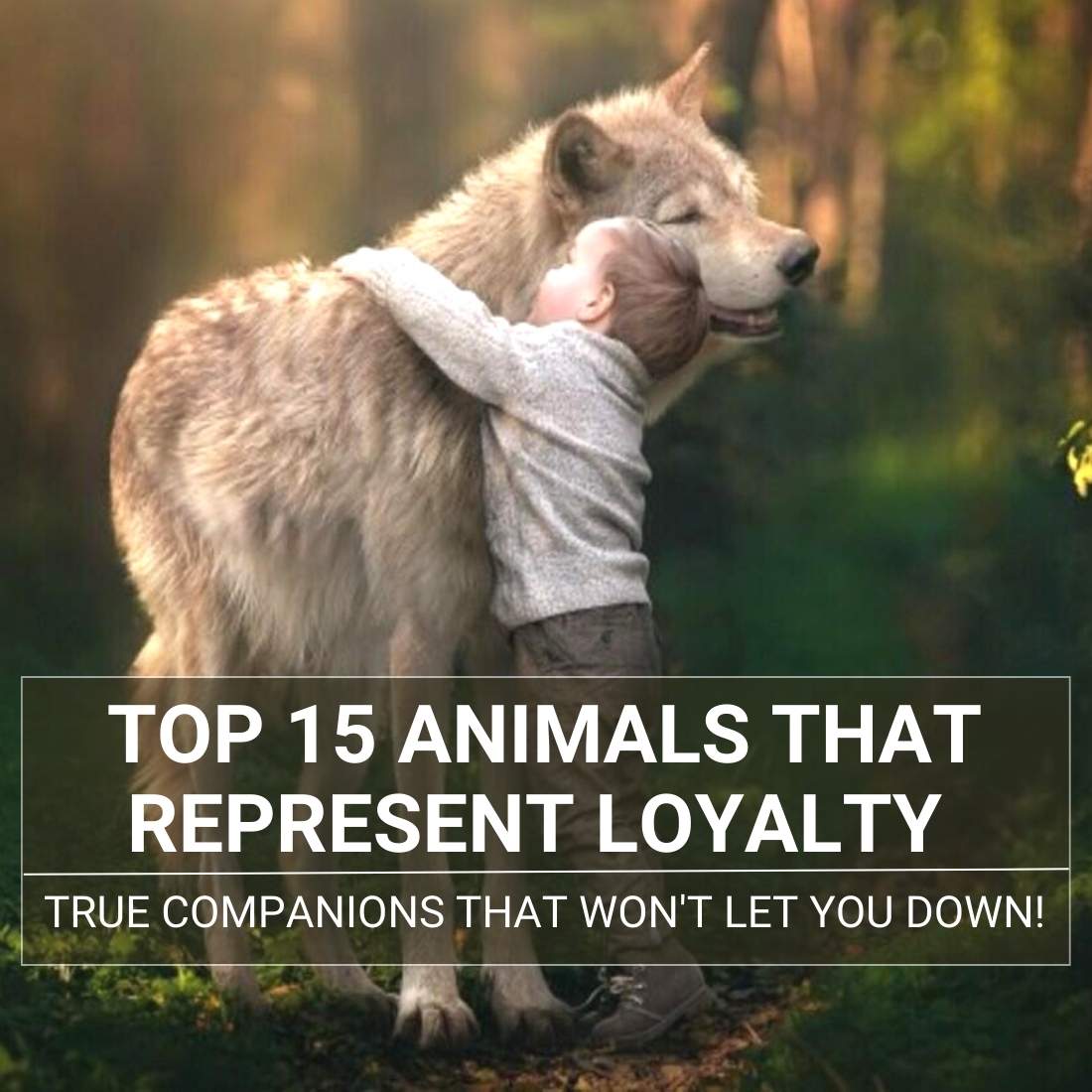 Loyalty and companionship can be expressed in many ways, and an example of a place to get this is through the animal kingdom. Aside from animals living in the wild and carrying out their everyday activities, animals that represent loyalty are especially the domesticated ones.

The act of loyalty expressed by some of these animals makes them good examples of sources of companionship. This article looks at the top 15 animals that represent loyalty and can serve as companions that won’t let you down. But before that, let’s examine why animals are loyal to humans. Sit back and read along.

“The only honest reaction and true loyalty we get is from our animals. Once they’re your friends, you can do no wrong.”

Why Are Animals Loyal to Humans?

Generally, people see some animals as loyal animals, and these animals also see their owners the same way. But the question is, “why are animals loyal to humans.” Can this loyalty be genetic, environmental, or influenced based?

Over the years,  have tried to answer this question, and some answers have been given. One of the primary reasons given for animal loyalty to humans is because we give them treats such as food and care. In return, animals become loyal to us.

Also, another study suggested that animals share some history with humans, and this long history of domestication and living together has made animals loyal to them, especially the canine family. This also makes them see us as a family. As wolves see members of their packs as their family, other animals also see us as their family.

Other reasons researchers gave for animal loyalty to humans include genetics, possession of empathy by animals for humans, and domesticated animals naturally feeling happy when they see humans around them.

Dogs are one of the most loyal animals. Bonding with us is hard-wired into their DNA—and we all benefit from canine loyalty.

Devoted dogs serve in the military, watch over our kids, chase away predators, and so much more.

The most loyal dog breeds have either spent centuries protecting homesteads or comfortably clinging to our laps. They’re often wary of strangers or ignore them completely, preferring you and only you.

Chimpanzees are also part of the animals found to have a high sense of loyalty. They are said to possess unique characteristics that make them loyal to the human race. These characteristics include empathy, respect for elders, love for fun and play, compassion, and resourcefulness. In displaying their loyalty, Chimpanzees have also been known to come to the aid of threatened humans.

“If having a soul means being able to feel love and loyalty and gratitude, then animals are better off than a lot of humans.”

Bees can be a symbol for the community. This symbolism comes from the idea that bees never work alone.

This idea of pitching together to imagine something bigger than ourselves is often called a “hive mind.” So, bees have long been seen as a symbol of unity in the community and commitment to the community. Read more about the bee symbolism here.

As tail wagging is to dogs, skittish body movement is to parrots. Parrots behavior is one of the most loyal bird species. They have been used as messengers before technological advancements like cell phones came about.

Parrots are great companions with different characteristics and behaviors. They are social animals that mate with one another for procreation. Thus, if your parrot doesn’t have a mate, you’ll be seen as its partner, making the parrot transfer all affection to you. As a result of this, they are said to grieve a lot when separated from their owners.

Read more about the parrot symbolism.

“I’ve seen people that don’t treat their animals well and yet their animals are still just as loving to them even though they’re not treated that well. It’s very hard to find that kind of loyalty and love and affection in human beings.”

Having a cat means you’ll have a faithful animal and companion waiting for you in the calm of your home. Cats can sometimes help you get rid of rats and mice. They are intelligent, friendly, and loyal animals, above all very fond of hugs. Cats will show you the meaning of true friend behavior.

Do you know cats even show their loyalty by bringing you a mouse? Yes, cats see us as children rather than parents and assume we cannot hunt for ourselves.

Therefore, they take matters into their delicate paws by bringing us dead meat as a sign of care. They also knead (that is, make biscuits) on us, a displaced behavior from their kittenhood to show they care.

Read more about the cat symbolism.

According to a study, horses possess excellent memories of people who have done them good at some point in their lives. The intelligence stretches as far as recalling human faces and their words. These beautiful creatures also possess the ability to solve strategies taught by their human companion.

Research performed by ethologist Sankey and her team further solidifies the claim that horses have a sense of loyalty to humans. The study says that horses trained without leashes or reinforcement kicked and bit researchers initially. However, as time passed, they got used to the researchers and wanted their presence more.

Dolphins have even been observed to save humans from drowning. Dolphins have lifted and carried humans to safety offshore when they’ve been stranded at sea.

Dolphins kept in captivity exhibit social behavior towards their human companions. They develop a sense of intense loyalty towards them.

There have been recorded cases of dolphins forming a strong bond with people that rear them. Read more about the dolphin’s spiritual meaning and symbolism.

Camels are known for their extreme loyalty to their owners. They will travel great distances and cross dangerous terrain to find their owner if they get lost. Camels also have a fantastic sense of direction, which helps them find their way back home no matter where they are.

These elegant beasts of the sky are symbols of loyalty, particularly when it comes to love and one-on-one relationships. They have a lot to show us about the importance of commitment and striving to maintain strong bonds with a partner.

In matters of love, the eagle pair encapsulates committed, life-long, and truly loyal relationships with a strong sense of pride and loyalty to family. Read more about the eagle spirit animal.

Wolves are known for the strength of their pack and the strong familial bonds they form with fellow members.

In the eyes of a wolf, the pack always comes first no matter what, and the needs of the group are put above the needs of the individual, hence why wolves fall into such a natural hierarchy within the pack formation

These fluffy fur balls sure know how to express concern for their owners. Rabbits are affectionate and social animals that enjoy spending time with their human companions.

Gaining a rabbit’s trust is relatively easy as long as you feed and provide shelter, and they repay you with their undying loyalty.

Goats are fiercely loyal. Once you have shown them kindness and love, they will never leave your side, ever! Loyalty is a unique quality in today’s often cutthroat world Aside from herding purposes, goats can be kept as pets because they form strong bonds. When goats are kept in isolation, they can easily get depressed. This is one of the reasons they are loyal to humans they have built strong bonds with after a long period of association.

Read more about the symbolism of the goat in our post.

Geese are loyal to an extreme, as self-sacrificing animals who will put the needs of the flock before their own.

As a totem or spirit animal, geese are one of the most loyal and community-minded animals. They put their friends and family first. This same act of loyalty is also being transferred to humans.

Geese also mate for life and take companionship seriously. As such, they can act as true companions to humans. Read more about the goose in our post.

Guinea pigs are also known for their loyalty. These animals form strong bonds with their owners, and they will often miss their humans when they are gone.

Guinea pigs love to cuddle and spend time with their people, and they will always be there to support them. They make great pets for those close to them and are very loyal.

Cows form strong bonds and friendships, spending much of their time with just a few preferred individuals. They even have best friends. When cows are with their BFFs (  Forever), their stress levels decrease, and when separated from them, their stress levels increase. Cows help each other, learn from each other and make decisions based on compassion and altruism. They even form grooming partnerships where they can do each other’s hair.

Read more about the cow in our post about cow symbolism.

What Kind of Animal is Loyal and Honest?

A loyal animal is what makes animal lovers happy! You can’t go wrong with a loyal animal! They do anything to protect people that care for them, which is also a sign that an animal is honest. Dogs, cats, and other honest animals that offer plenty of love are typical examples of loyal and honest animals.

In all, many animals prove loyalty to humans who are close to them, but we have chosen to give you fifteen out of them. Treat your pet kindly, and you will get the best friend in them.