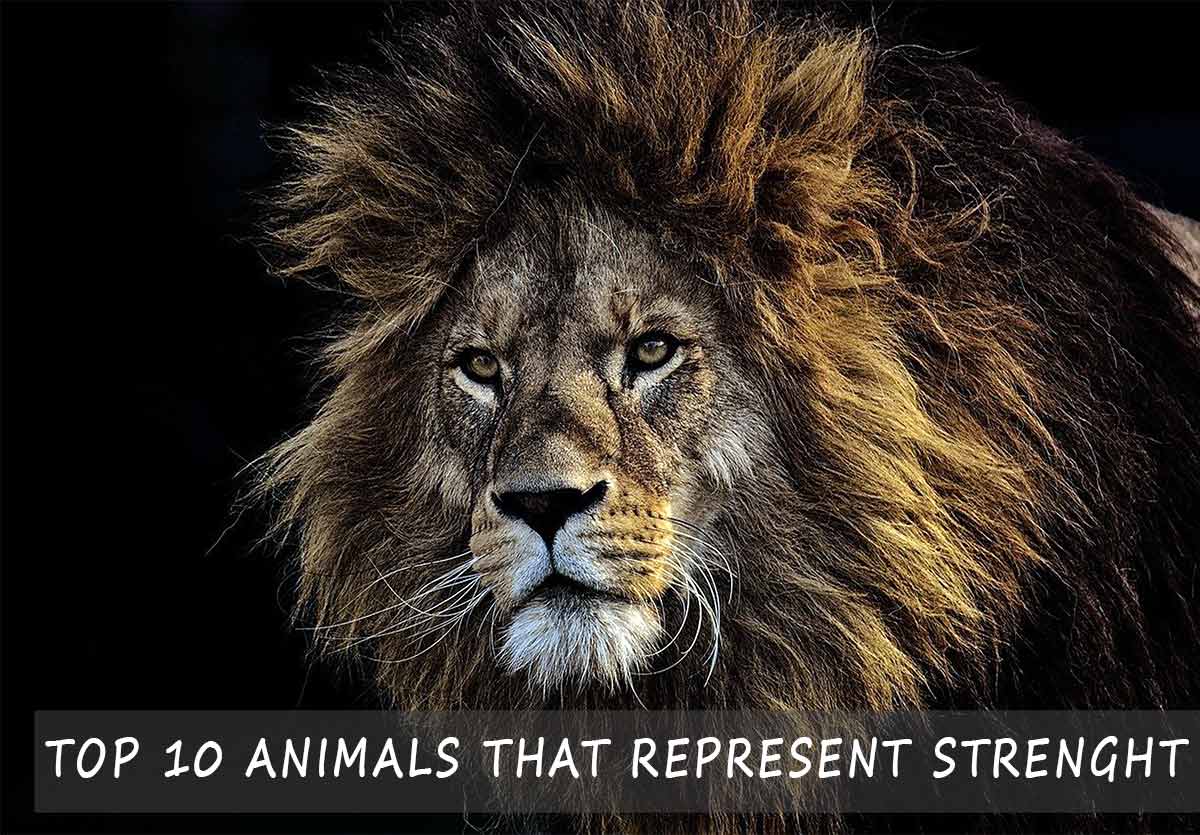 Animals are strong in ways that humans could only imagine. And though strength can be measured and defined in a variety of ways, numerous animals are considered to be symbols of strength and energy that we can tap on as our animal spirit guides us to strive towards becoming the best versions of ourselves. Prepare to be amazed as we talk about animals that represent strength. From the lion to the elephant, these animals represent a powerful image that is often associated with their respected traits. There are many more animals that represent strength, which you will learn about in this article!

Let us remember that animals are not mere resources for human consumption. They are splendid beings in their own right, who have evolved alongside us as co-inheritors of all the beauty and abundance of life on this planet.

Their ability to carry 50 times their body weight makes them one of the strongest animals on the planet. Physically, it is the same as trying to lift a truck that weighs a ton by using only your teeth. Ants are known to signify strength, diligence, stamina, determination, unity, patience, and loyalty. As a spirit animal, they possess great strength and a sense of accomplishment which reminds us that regardless of size, if you put in the effort, anything is possible.

Ants symbolize our innate ability and determination to keep everything in proper order by planning optimally and through self-control and honesty that will eventually lead to the realization of your dreams.

Regarded as the strongest bird in the world with lots of bird symbolism, eagles can catch prey that is several times heavier than them. With eyes that are eight times sharper than that of humans, they are considered one of the most potent predators of the sky.

Its presence represents courage which motivates you to go out of your comfort zone and extend your limits, attempting to reach greater heights and becoming more than you believe you are capable of. In periods of trials and tribulations, the eagles spiritually stimulate you to be patient and remain faithful that the future holds better possibilities that have yet to present themselves (check also our post about the eagle feather meaning).

Due to its power, the eagle also made it on our list of birds that represent strength.

It is believed that these enormous and powerful creatures can lift approximately 2000 kilograms, but in general, gorillas signify pride and the nobility within each of us. As spirit animals, they radiate honor, dignity, and a message of a non-aggressive leadership that exudes compassion, balance, understanding, and temperance. This reminds us of the importance of family, particularly spending quality time with them.

As an animal totem, a gorilla symbolizes stability in your endeavors, encouraging you to stay humble and grounded as you thrive to take care of your responsibilities while tapping on your inner strength. Read more about the gorilla symbolism.

As animals that also signify freedom, these strong, noble creatures represent elegance and endurance as well. Scenes of horses darting into the horizon could be awe-inspiring as Native Americans believed that horses are a combination of raw strength and the wisdom that one can find in the wind.

Although it is believed that to stimulate such power, the link among the mind, the body, and the spirit must be strong for it to grant us a connection with the spirit realm that would allow us the courage to take chances even in times of tremendous challenges and feelings of weakness.

As one of the most feared animals by humans and its peers, the rhino is regarded as one of the strongest and most dangerous animals since ancient times. Feared as they often display aggressive behavior, rhinos prefer to graze grasslands in solitude than to gore watchers and predators.

Boasting to be one of the biggest animals in the world, they represent peace, gentleness, and strength. The rhino’s presence exhibits warmth to both mind and spirit as well as an intimate connection to stability which enables you to gain a higher level of confidence, fortitude and, adaptability. Ancient shamans recognize the spiritual importance of a rhino’s horn as an object that encourages us to live, think, feel, and even love at a level that is more than the usual.

Not only do elephants represent immense and massive strength, but they also signify quiet elegance and wisdom. Although their sheer size would allow them to effortlessly crush everything around, they are more commonly associated with inner peace and being calm (read here about animals representing peace). Like most animals, elephants may resort to violent means when angered or threatened, but they are known to symbolize spirituality and wisdom.

Considered to exalt leadership, these gigantic, sacred creatures promote longevity, happiness, and good fortune. They are often associated with the Indian God Ganesha, a young man with the head of an elephant, making them a representation of an incredibly wise and gentle heart (read more about the elephant symbolism).

These gorgeous, multi-colored felines are fearless predators that prefer to hunt by their lonesome. Typically linked to enormous strength and power, tigers symbolize elegance and prosperity as well. As spirit animals, they are known to be ferocious dreamcatchers, not allowing anything or anyone to stand in the way between them and their goals.

Tigers promote unmatched endurance and longevity which tend to be highly ambitious and, at times, arrogant. Those who have a sense of connection with this brilliant and powerful spirit animal might end up feeling the effects and consequences of such a presumptuous attitude that often creates a rift.

Aside from those cuddly little cubs, bears are huge and terrifying by nature. Their strength, though raw and wild, is more often linked to the physical rather than the spiritual realms. This massive and imposing animal is known to grant their captors who would wear their fur the spiritual energy that transforms them into better hunters themselves. As spirit animals, bears characterize grounding forces and enormous strength since they have been worshipped as a powerful totem that inspires courage to those dealing with great adversity.

They are also a powerful guide that provides both physical and emotional healing and could be a great support in times of extreme difficulty. When the bear lets its massive presence be felt in your life, it is a sign of encouragement that it may be time to stand for your beliefs as it gives a stable base to face challenges in any form.

Bears stimulate fear and admiration due to their strength, but their presence also inspires respect. The power and stature that bears emulate are meant to guide you to fearlessly take the role of a leader not just in your life, but in the lives of other people as well.

Bear totems represent inner strength and confidence and an incredible sense of protection towards friends and loved ones, making you prone to fits of anger when they are threatened in any way.

Known as one of the more popular animals that represent strength, wolves are pack animals that are at their best when surrounded by their family. Often seen with their pack, they have the unique ability to retreat to loneliness and solitude without compromising their strength. They are a symbol of leadership and freedom as they channel their strength and cunningness from their pack, wisely protecting them with well-calculated actions rather than jumping to conclusions.

Identifying with this amazing creature automatically enables you to put your loved ones above all others even at the expense of your own safety and comfort. The wolf also symbolizes the moon, the night, and the world of spirits, which is why certain tribes in North America see them as a representation not only of creation but of death and rebirth as well.

Feared in some parts of Europe, wolves are a symbol of death and destruction according to Norse and German myth and are believed to gnaw through chains to eventually consume the sun at the end of time as told by the Vikings. They signify loyalty, guardianship, and spirit and are thought to be instructors that guide us in our daily lives to ease us from all our troubles and anxiety.

10. Lions -the King of Animals

Both majestic and beautiful, lions are referred to as the king of the jungle. Their presence bonds the concept of courage, pride, and strength, making them an imposing symbol of power, spiritual rebirth, and resurrection. Known as a mighty protector, identifying with this fierce creature awakens an inner dominance that nobody can control and silence.

As a spirit animal, lions are blessed with vivacious skills that prompt people to follow their lead, trust their wisdom, and feel secure by the lion’s strength. Contrary to their tough demeanor, they are highly social animals that are deeply linked with their peers.

Lions signify a positive time in our lives that often represents courage, wisdom, pride, strength, authority, and dominance. This relates the lion to counseling and an enormous understanding of how things would be if we are stripped off of our worldly possessions. As one of the few animals that were outlined in the bible, they represent a balance between the physical and spiritual realm, reminding us that even amid enormous dominance to never wander too far from our spiritual beliefs.

7 Ridiculous Feats of Strength in the Animal Kingdom

You’re probably already familiar with some of the more common examples of super-strong animals, like the crocodile with its powerful bite or the leafcutter ant’s impressive overhead carry. However, there are lots of lesser-known animals capable of amazing acts of strength.