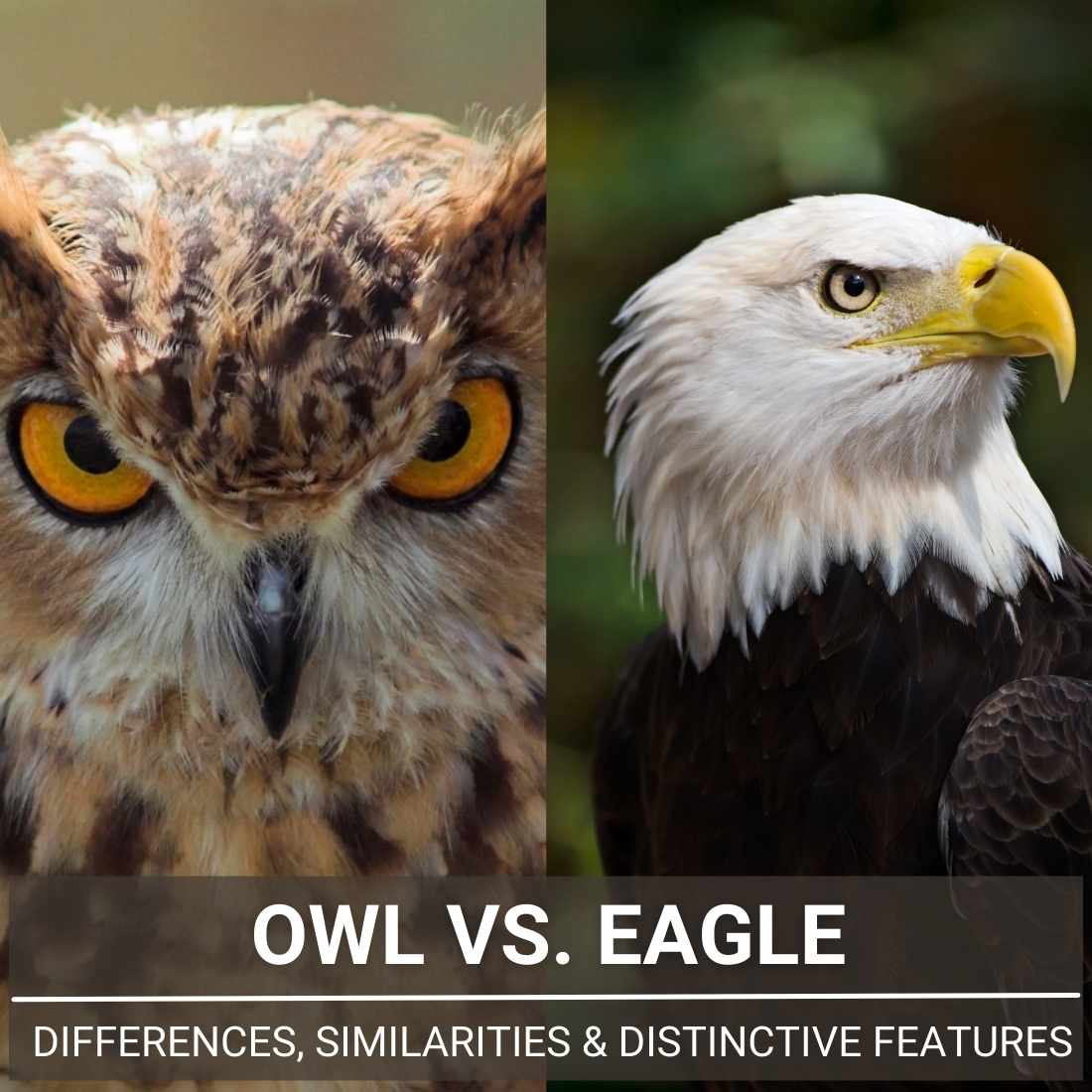 People have always been fascinated with owls and eagles, which haven’t changed over time. Both of these are aggressive birds that are known to combat and protect their territory. However, eagles are considerably more powerful and more sturdy than owls. Also, they are larger and weigh more than owls.

Take a look at the overview below to see how the Owl and the Eagle differ from each other.

Differences between Owl vs Eagle

Owls have a size range of around 6–28 inches and wingspans ranging from 1–6 feet in length. The majority of owl species are on the smaller side of the size spectrum. Their weight varies according to their species; however, it is often between 2-3.5 pounds.

Owls may be found on every continent, with the exception of Antarctica, and they have inherited several distant island groupings, such as Hawaiian Island, from their ancestors. However, they prefer to dwell in polar tundra, marshlands, deciduous woods, pine forest, dunes, and agricultural areas rather than other types of environments.

On the other hand, different eagle species may be found in different parts of the world. Golden eagles may be found worldwide, including Eurasia, Africa, and Central America, where they can be seen in large numbers. The range of this eagle’s population extends from Alaska to Mexico’s Central and Southern regions in the USA. On the other hand, these birds prefer to reside in grasslands, shrublands, woods, deciduous forests, and tundra rather than urban areas.

Owls are easily distinguished by their huge, spherical heads and large eyes, which are instantly apparent. They also have a beak that is angled downward, as well as soft, cryptically colored plumage. Males and females are typically identical in appearance, with the exception of the female being up to 25-27 % bigger than the male.

Eagles are distinguished by their white heads and tails and their dark brown bellies and wings. Eagles have enormous hooked beaks that are used to rend flesh off their victims, as well as strong, muscular legs and sharp talons. The beak of most eagles is generally heavier than that of the owl. The eyes of eagles are incredibly strong. Their limbs and bills are a brilliant shade of yellow. Immature birds primarily have blackheads and tails, and their brownish wings are speckled with white/brown. Young birds reach adult plumage after around five years.

A large number of owls are carnivores, meaning they consume meat. Many owl species feed primarily on small rodent-like animals, such as voles and mice, which are the major food of many owl species. Frogs, reptiles, snakes, fishes, rats, bunnies, birds, foxes, and other species may also be found in an owl’s diet, as well as other types of prey. Great Horned Owls may occasionally find skunks (see also skunk symbolism) to be delectable enough to consume them.

Eagles are believed to be at the top of the food chain, and the food of eagles varies depending on the species and the environment in which they live. Golden eagles are carnivores, and they prey mostly on small animals such as rabbits, foxes, raccoons, and marmots, among other species. Bald eagles are likewise carnivorous, and because they are renowned as fish eaters, their major source of nutrition is fish. However, small species of birds, bunnies, lizards, crabs, and amphibians can also be found in their diet.

Two-tone hooting is often used in owl mating rituals, and once a couple has been formed, they will remain together until death. Most owl species usually do not build their own nests; rather, they steal over the nests of other birds and make them their own. It takes the mother owl a few days to deposit from one to eleven eggs, yielding an average of six litters per year. The eggs hatch between 25-32 days after being laid. The chick hacks its way out of the egg and departs the nest after 3 to 4 weeks.

Eagles only mate once in their lives. The female golden eagle lays its eggs between February and May, and the incubation period is between 42 and 45 days, depending on the species. The babies hatch out at intervals of many days between each other. The golden eagles’ offspring are nourished by both the male and female of the species. The hatchlings remain in the nest for 47 to 80 days after hopping, walking, or falling out of the nest.

Additionally, most eagles are monogamous, meaning they only mate once during their whole lifespan of living together. When the couple has finished building the nest, females lay eggs and incubate.

Similarities between Owl vs Eagle

The Owl and the Eagle are both fascinating large birds to watch. To begin with, both of them have razor-sharp talons that they use to capture their prey. In addition to being superb hunters, both of these birds are also excellent flycatchers. Both these birds have razor-sharp beaks.  In order to find food, both birds depend on their exceptional vision and hearing. Both birds are carnivores. They are frequently successful in capturing their prey alive. The next similarity is that both birds have beautiful feathers.

Most owls have uneven ears of varying sizes and heights. They have a huge hearing capability, and they can find prey even if they can’t see it. Owls’ necks can rotate 270 degrees. When the neck moves, a blood pooling system gathers blood to fuel their brains and eyes.

Here you can check all Owl sounds

Eagles may be the natural predators at the top of their food chain, but that does not mean they will remain there indefinitely. Aside from weakening their talons, the beaks of eagles distort and bend as they get older. It would be difficult for them to feed if the shape of their beaks altered.

Other intriguing facts about the Eagles:

Here you can check all Eagle sounds

Asymmetrical eyes with small size and weight as compared to eagles. Owls have huge color variations, but the most common color is brown. Owls may rotate their head up to 270 degrees.

Both Owls and Eagles are fascinating predators, and sometimes they even battle for food. Eagles are bigger and larger and have the advantage of flying for more time at high altitudes.