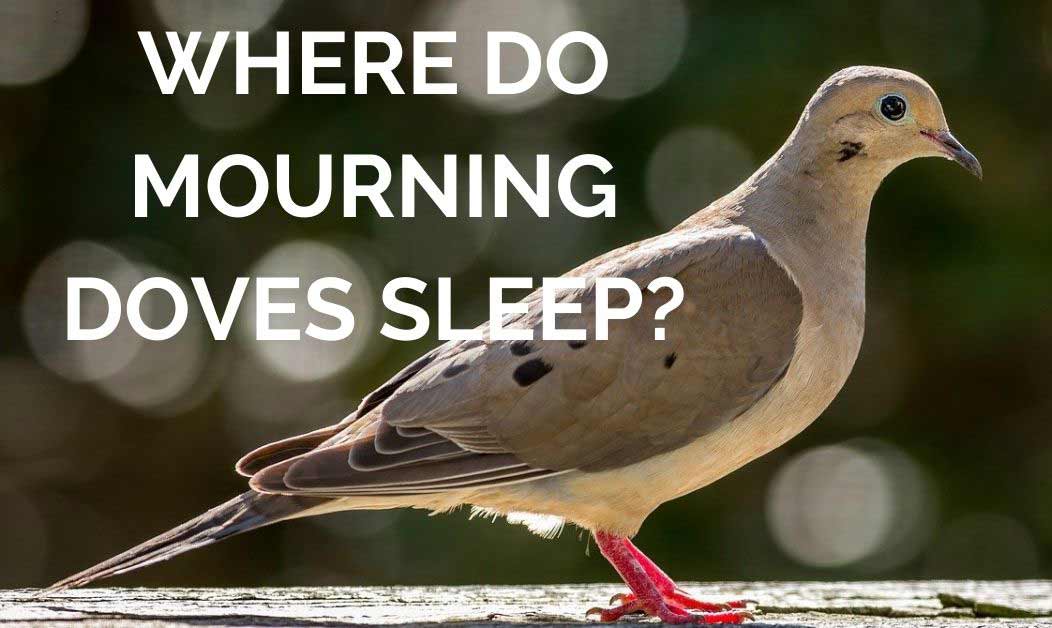 The mournful call of the Mourning Dove is a common sound in North America. The bird’s cooing, usually with two-syllable notes, often sounds like “coo-wheet” or “coo-whet.” It has been suggested that these calls are used to establish territory and attract mates. Some people find the birds’ song pleasant while others consider it an annoyance.

Mourning Doves can be found throughout North America from coast to coast and as far north as Alaska and Canada. They live in a variety of habitats including wetlands, forest edges and meadows where they feed on seeds, fruits, leaves and insects for food.

This blog post will discuss the habitat of mourning doves and where they sleep. I’ll also touch on some interesting facts about this fascinating bird such as why it’s called a “mourning dove,” how long they live in captivity, and why they aren’t often seen due to their secretive nature.

A mourning dove’s beauty is an understated one: the colors of its feathers ranging through various shades of gray and drab violet, often with a striking splash of turquoise around the eyes.

Why is it Called Mourning Dove?

Here’s a fact you may not know about these birds: mourning dove is actually called that because people once believed it was an omen of death when someone saw them before their time had come- hence the term “mourning” dove.” In reality, though, this bird species has been around since prehistoric times and has only become an emblematic symbol after many centuries as we’ve passed such deaths off as natural occurrences–even commonplace ones like aging or just being ill!

Others say it’s also called a mourning dove due to its soft call which sounds like it’s saying “mourning do-o-o” when heard close up. The name didn’t come from anything specific about their behavior but rather was likely used because they’re often seen during periods of sorrow such as funerals where people mourn the loss of loved ones who’ve died.

Sound of the Mourning Dove Call

Where Do Mourning Doves Spend Daytime?

The mourning dove is the most common bird in North America, but they are usually not seen because of their secretive nature.

They can often be found in open fields, scattered trees, and woodland edges. They only roost during wintertime in woodlots where they are safe from predators. Mourning doves feed on the ground of grasslands, agricultural fields, backyards, and roadsides with their favorite food being seed-bearing plants such as grains or wildflowers that have fallen to the earth’s surface.

Mourning Doves are a gentle species that feed on the ground and in the open – however, they tend to be shy birds that prefer areas with trees or shrubs for cover.

They peck or push aside ground litter, but don’t scratch at it to find food as other birds do. Males have favorite “cooing perches” they defend from other males while waiting for their mates to return with food; females will eventually join them there once ready. Members of a pair preen each other’s feathers around his neck during courtship rituals before moving onto more intimate ones like grasping beaks (not unlike kissing) and bobbing heads up and down rhythmically together. See video below:

How Do Mourning Doves Sleep

Mourning Doves have a distinctive sleep pattern that differs from other birds. Their head rests between their shoulders, close to the body rather than tucked under feathers on its shoulder as most birds do. This clould be a result of their lack of an oil gland which keeps other birds warm.

Where Do Birds Sleep

The difference between sleeping and roosting is quite confusing to most people. Roosting, which generally refers to communal birds that always remain together in large flocks such as Crows or Starlings, but it really just means a period of inactivity similar to sleeping. All bird sleep- they have periods of “quiet” sleep during which they peek at intervals; however, their eyes stay closed for the majority of time spent asleep and are considered active when awake because there’s no way you can tell if one might be pretending with all those feathers covering up its eye movements!

Many birds roost at night. They may perch on a branch or tree, climb into the fork of two branches to create an enclosed space for themselves, or even use their claws and beak to pull leaves together in order to form what is called a “roofless nest.”

Many different types of birds are known as nesters such as wrens, chickadees, martins, gulls and more.

In contrast with dove-like birds that make nests out of twigs while they’re sitting on them—most other species typically build their nests beforehand by gathering material like grass and feathers using their feet or bill (sometimes both). Some bird species will only sleep during the daytime because they simply cannot survive if they sleep at night. They are called crepuscular animals and they include owls, bats, opossums, and more.

Where Do Mourning Doves Sleep

Mourning Doves in particular have a difficult time sleeping during the night because of their sensitivity to light—they cannot see well at all but can still sense what is going on around them by sound alone. Doves use their sharp-edged beaks for several purposes: it helps break up food particles that would otherwise go down uneaten as well as defending themselves against predators such as hawks; males also use their bills when fighting with other male doves over territory or mates. When not actively engaged in such activities, the dove’s wings cover its head while it sleeps so that no one knows where they are located until the morning.

Mourning doves, like their fellow members of the dove family, sleep next to their mates for most of the mating season and through egg development. They roost in deciduous trees or conifers outside of breeding season. When the mating and nesting seasons come, they will choose a mate for life to nest with them.

Mourning Doves sleep on high perches or in trees and often fly to roosts at dusk – so they can avoid nocturnal predators. They are inconspicuous during the day because they spend most of it resting on tree branches or nestling among leaves. Mourning doves also rest with their wings tucked under them when not flying. Like many ground-dwelling birds, mourning doves have a poor sense of smell which helps keep them hidden from predators while sleeping.

In the morning they may gather together for safety as well before starting off again in search of food and water sources; this is called “mobbing.”

Click if you want to read about the mourning dove or check our posts: Turtle Dove vs Mourning Dove and dove feather meaning.