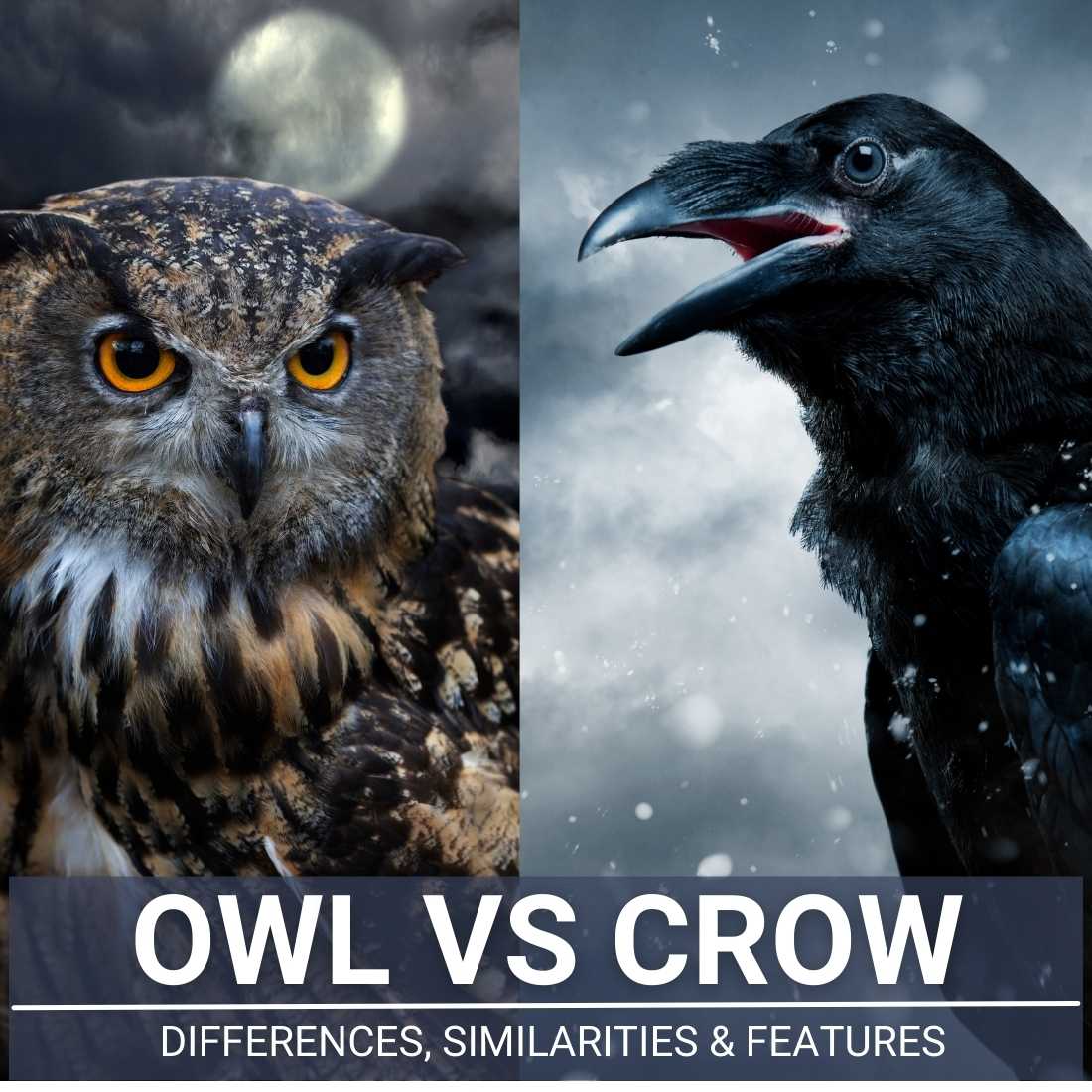 People have long been fascinated by owls and crows. These two birds are known to protect and combat each other’s territory. But owls are more robust and more complex than crows, making them superior hunters. They are also much larger and heavier than crows.

Look at this overview of the Owl vs Crow to understand them better.

Differences between Owl vs Crow

Owls live on almost every continent except Antarctica, and they are related to ancient humans who carried with them remote island groups. They prefer to reside in the arctic tundra, wetlands, deciduous woods, pine forests, marshy areas, agricultural zones, and in some other environments.

On the other hand, crows are widespread and may be found in almost any habitat. These remarkably adaptable birds may be seen in both urban and rural habitats. They can be found in woodlands, meadows, agricultural areas, ranches, hills, deserts, arctic tundra, and riverbeds.

The giant spherical head and wide eyes of an owl distinguish it from other animals. They also have a downward-pointing beak and soft, cryptic-colored plumage on their backs. Males and females are very identical in appearance, except that females are bigger than males.

While the crow is a large bird with a wide neck that some find intimidating, its wings are broad with wingtips stretched forward. Their tail is usually fan-shaped.

The colors of their feathers vary from purple to black, green to brown or blue to white, depending on the sunlight. A crow with brown, scaly feathers is molting, which is the reason behind it. They have dark, strong legs and feet and a black, hooked beak with bristles over the arch of their nostrils.

The vast majority of owls are carnivores, which means they regularly ingest meat. Numerous owl species rely heavily on tiny rodent-like animals such as voles and mice as their primary prey. Small rodents are the principal prey of many owl species, and they offer a large portion of their diet for many owl species. Frogs, reptiles, lizards, fish, mice, bunnies, birds, hedgehogs, and other mammals, as well as a variety of other prey, can all be included in an owl’s diet. Great Horned Owls may regularly find skunks (see also skunk symbolism) appetizing enough to consume in big amounts.

Crows consume various items while foraging on the ground or trees, including earthworms, ants, and other tiny critters, seeds, and fruit. Additionally, they feed on debris, carrion, and chicks taken from their parents’ nests.

During owl mating rituals, a two-tone hoot is regularly heard, and once a pair has been formed, they will remain together until death. When it comes to nesting, most owl species do not build their own nests; instead, they colonize and make their home in the nests of other birds. It only takes a few days for the mother owl to lay between one and eleven eggs, resulting in an average of six litters per year. The incubation period begins when the eggs are laid and can last between 25 and 32 days before hatching. But incubation period varies depending on the species.

On the other hand,  many crow species are solitary birds; they frequently forage in big groups. Others prefer to form huge groups in order to avoid being seen.   When one of the crows dies, the remainder of the horde forms a violent swarm around him. Rather than being solemnly dedicated to the departed’s memory, this funeral is more informal in nature. The crows get together to ascertain who or what murdered one of their own.

Some crows migrate; however, others do not migrate in the classic sense of the word. They will move to warmer portions of their own territory if this becomes necessary.

Owls range in size from 6–28 inches in length and have wingspans of 1–6 feet. The great majority of owl species are expected to reside in small to medium in size habitats. They range in weight from two to three pounds, depending on the species.

Crows come in various sizes because there are over 40 species of crow. The American crow stands around 17 inches tall. The fish crow is about 19 inches long. The common crow is significantly larger, at approximately 28 inches in length. Crows typically weigh between 11 and 58 ounces, depending on their species. They have characteristic wedge-shaped tails and a light-colored beak.

Similarities between Owl vs Crow

The Owl and the Crow are both intriguing tiny birds to observe in their natural habitat. The first thing you should know about them is that both of them have sharp claws that they employ to catch their prey/food. Both of these birds have razor-sharp beaks. Both birds rely on their remarkable vision and intellect to locate food, which they do with great success. The final similarity between the two birds is that they both have lovely feathers.

In order to keep her young owlets warm, the mother owl would often sit on them or brood on them after they hatch. The mother will also seek food and provide sustenance for the owlets until they are mature enough to care for themselves.

Other interesting facts about owls:

Here you can check all Owl sounds

American crows will stand atop anthills and let the ants crawl on them. The ants will be rubbed into the bird’s feathers at that point. This type of action is referred to as anting, and it is employed to fight off parasites. Because of the formic acid secreted from the ants’ bodies, ants can also induce birds to get drunk.

Other intriguing facts about Crows:

Here you can check all Crow sounds

The eyes of owls are asymmetrical and of tiny size and weight. Owls come in a vast range of colors, but the most frequent is brown. Owls can swivel their heads more than 250 degrees.

Crows make a steady caw, caw sound that is unique. It is possible to discern that crows have a primary black hue with feathers that are somewhat coarser in texture if you pay close attention to them.

The Owl and the Crow are both fascinating little birds to watch in their natural environment, and it’s a treat to see them both together. They both have strong claws, which they use to capture their prey or food.