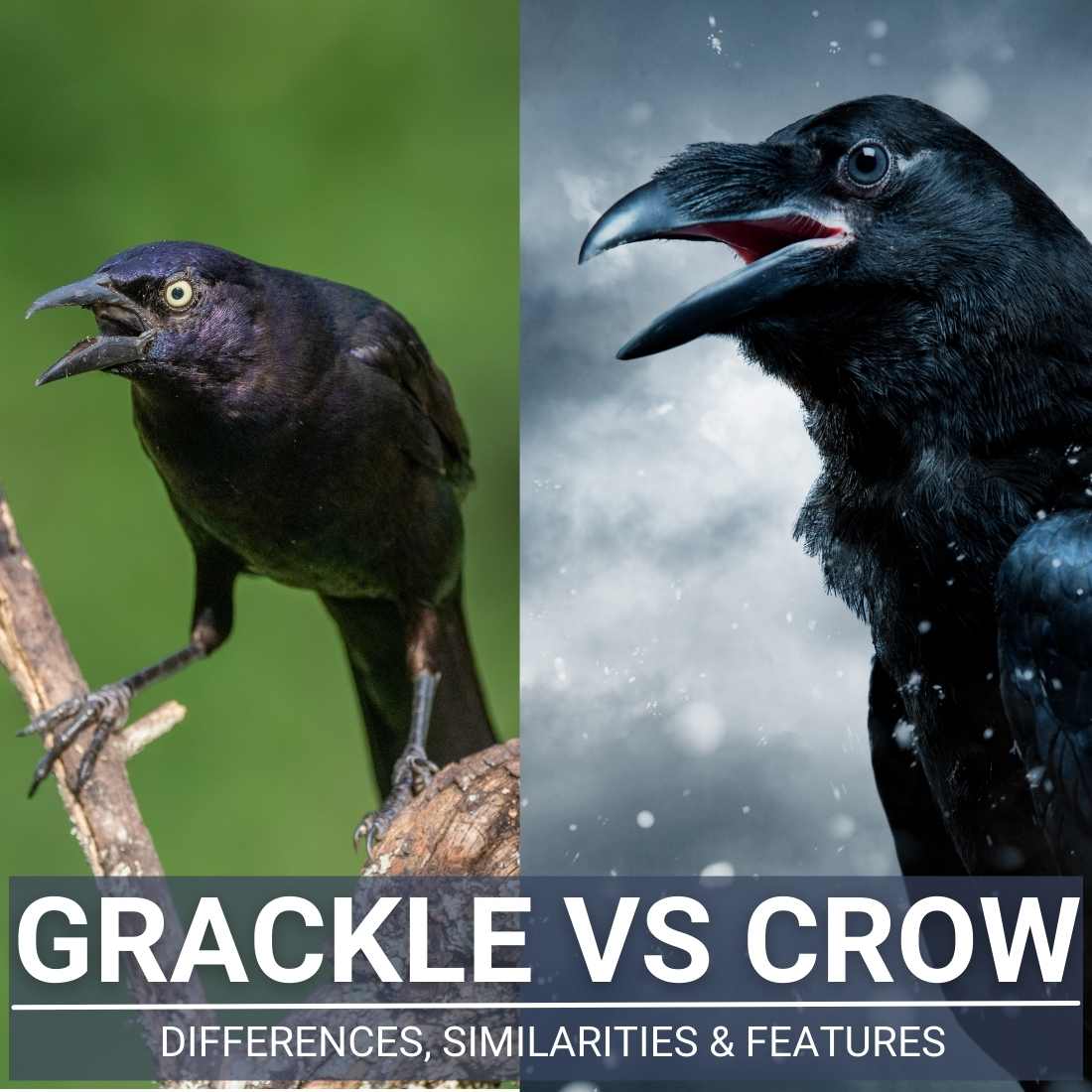 Grackles and crows have always fascinated humans. Distinguishing between a crow and a grackle may surely be difficult because both birds have many similar traits, including the same color, beak, body shape, etc. But they also have many differences.

Take a look at this comparison between the Grackle and the Crow to understand both species better.

Differences between Grackle vs Crow

Grackles are present in a wide range of regions with dispersed trees (ideally conifers), as well as in areas where humans live. Additionally, they are found in agriculture, orchards, and marshes. Because grackles have adjusted so well to human buildings, they are abundant in open places such as housing areas, municipal parks, and graveyards. Indeed, human modification of wooded ecosystems for farming has resulted in the growth of the range and population of Grackles.

On the other hand, crows are ubiquitous and may be found in practically any habitat. These astonishingly versatile birds are found in both urban and rural environments. They inhabit forests, meadows, agricultural regions, ranches, hills, dunes, polar tundra, and riverbeds.

Grackles are blackbirds of moderate size. Their feathers are black with shiny, iridescent glitter. Their heads, necks, and breasts are often glossy purple-bluish or blue-greenish. However, Grackles in various locations of North America have slightly distinct plumage colors. In New England, the Grackle subspecies have bronze-colored.

Grackles are distinguished by their long, pointed, black bills and golden eyes. Their tails are lengthy and formed like a keel.

While the crow is a massive bird with a long neck that some find threatening, its wings are broad and have forward-facing wingtips. Typically, their tail is fan-shaped.

Their feathers range in color from violet to black, green to brown, or cyan to white. The explanation for the brown color crow is that it is undergoing the process of molting. Their legs and feet are dark and powerful, and they have a black, curved beak.

The Grackle is a competent forager who eats a wide variety of diets. It eats a diverse range of seeds, including those from agricultural crops such as maize. Additionally, the Grackle will go into the water in order to grab a tiny fish, pick parasites off turtles, take worms from other birds, and on rare occasions, consume other adult birds. They have a hard portion of their beak to see open acorns, which is unique to the Grackle.

On the other hand, Crows forage for food on the ground or in trees, consuming various items such as earthworms, spiders, and other small invertebrates, seeds, and fruit, among other things. Aside from that, they consume debris and carcasses.

Grackles are pretty sociable. Even during the mating season, grackles stay together at night when they are not incubating eggs. These flocks can grow to be quite big. Their flock frequently contains other bird species, including blackbirds and cowbirds. Breeding partners may construct a nest apart from other birds or in colonies of up to 200 nests.

Grackles occasionally attack fellow grackles and other bird species despite their sociable nature. They attack by nipping, scratching, clawing, and flying at their prey. Grackles feed on the eggs and nestlings of other birds and occasionally kill and consume other adult birds. They frequently consume adult house sparrows. Grackles protect the area surrounding their nest with their lives. They do this by mobbing, pursuing, or diving at predators, which may include people.

On the other hand, many crow varieties are solitary, but some also form groups.  When one of the birds dies, the rest of the crow group swarms around him in a violent buzzing. Rather than being formally dedicated to the memory of the deceased, this is a more casual funeral. Crows gather in order to determine who or what murdered one of their own.  While some crows migrate, others do not believe in the conventional sense. They will relocate to warmer areas of their own region if required.

Adult Grackles range in length from 11 to 13 inches, with a wingspan of 15 to 18 inches, and weigh 2.7–5.0 ounces. Although grackles are less dimorphic than crows, still their sexes can be distinguished easily.

On the other hand, crows have a variety of sizes due to many subspecies. The American crow reaches a height of around 17 inches—the fish crow measures around 19 inches in length. The common crow is substantially bigger, reaching a length of roughly 28 inches. Crows weigh between 11 and 58 ounces on average, depending on the species.

Similarities between Grackle and Crow

Both Grackles and Crows have striking, black plumage, black limbs, and a matching black beak, and both have glossy feathers that reflect color in the sunshine. They also have strong claws, which they use to capture their prey or food, which is something else you should be aware of while interacting with them. The last resemblance between the two birds is that they both have beautiful voices.

The Grackle permits ants to slither over its body so that they might generate formic acid, which is considered to destroy parasites. This procedure is known as anting.

Other fascinating facts about Grackles include the following:

Here you can check all Grackle sounds

Crows may not appear to be friendly birds to some due to their looks and eating habits. They are commonly referred to as scavengers since they feed on leftovers and are thus found in filthy environments. Having an entirely black body, including the beak and legs, doesn’t appear to be particularly appealing to some people.

Other interesting facts about crows:

Here you can check all Crow sounds

They are little blackbirds the size of robins. Their black plumage is lustrous and shiny. These birds have long black bills and bright eyes with long, keel-shaped tails.

Crows have a distinct caw, caw cry. If you look closely, you can see that crows have a primarily black color and feathers that are rougher in texture.

Crows are gregarious, noisy, and entirely at ease in an urban environment; they certainly elevate the term “common” to a whole new level. On the other hand, Grackles are small, shiny birds that often live in flocks.