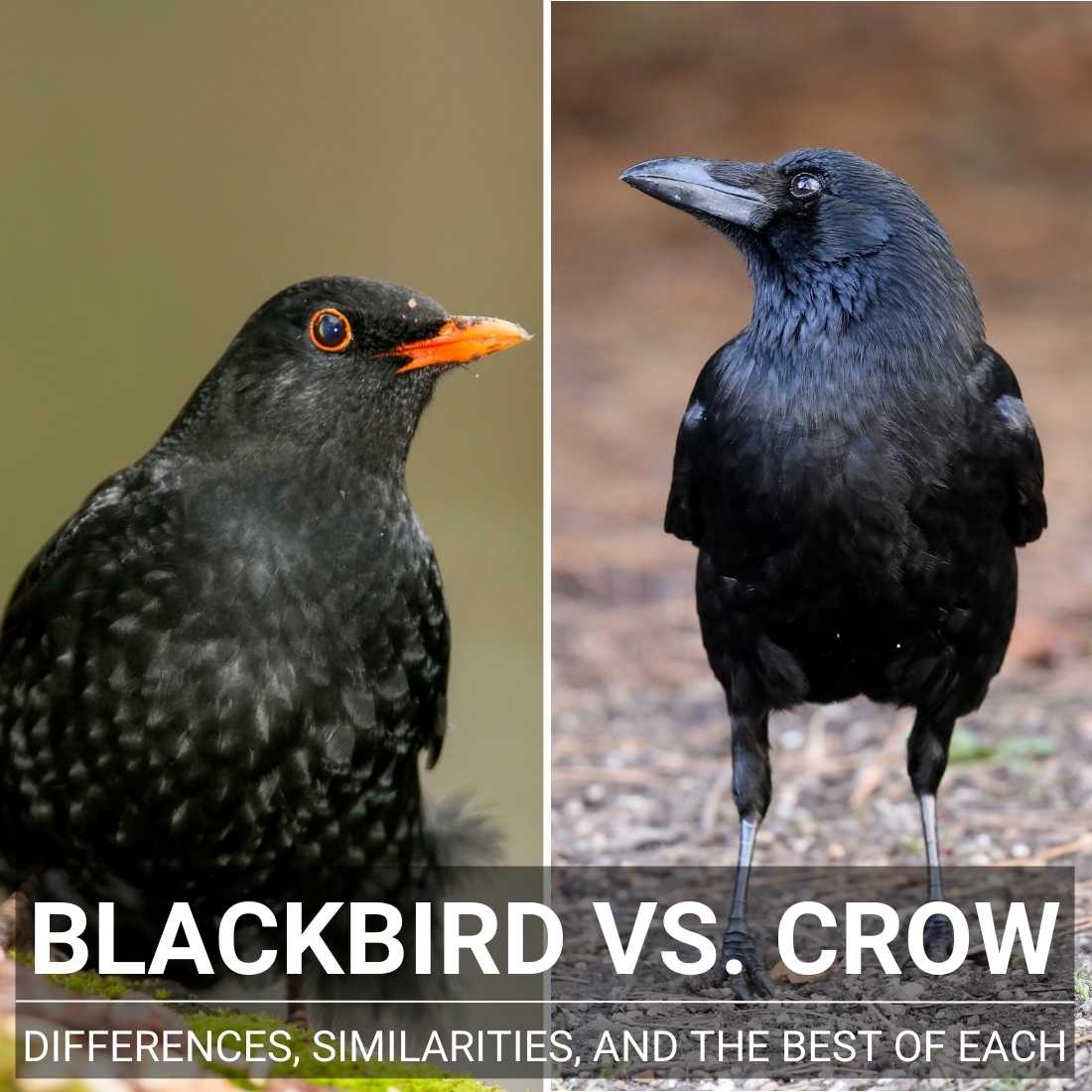 There are many different types of birds in the world, and each one has its unique features and habits. In this blog post, we will be comparing the blackbird and crow.

Both of these birds are common in North America, but they have some key differences in their behavior, diet, and habitat. Keep reading to learn more about these fascinating creatures! We will also provide some tips on how to identify the blackbird vs crow. So let’s get started!

Differences between Blackbird vs Crow

Blackbirds are much smaller than crows, with the average mass of a European blackbird being only 102g compared to 400g for an American crow.

You’ll probably find the blackbird more appealing to the eye since it has a variety of colors ranging from yellow/orange beaks to a bright yellow eye-ring (males only).

The American crow is a bird that consists of black feathers (though if you like shiny things, you might like the fact that crow feathers sometimes give off a glossy look to them). And if you ever see a young crow’s brown feathers and think hmm perhaps not all crows are 100% black, don’t worry, they’ll turn black after their first molt.

Crows prefer large open grasslands with nearby trees, where they can forage for food, breed, and roost.

On the other hand, Blackbirds tend to prefer a more urban environment than a rural one due to an abundance of food made by people. This doesn’t mean blackbirds don’t inhabit farmlands as well though, since they mainly build their nests in dense vegetation.

Crows are cooperative breeders, meaning some of the offspring won’t leave their nests and start their own families. Instead, they’ll remain at the nest to raise other young (known as helpers) that aren’t their own and defend the territory against predators.

Crows also engage in winter brooding, where they will gather in the hundreds or thousands in an area with large trees in the afternoon and all move to their permanent brooding site at night.

American crows, in particular, can also engage in a behavior called anting, which is when they stand on anthills and allow ants to climb onto them. They then rub the ants all over their feathers so that the crows can both ward off parasites, and get drunk from the formic acid released by the ants!

Crows are considered smart animals through their abilities to hunt and avoid capture.

Blackbirds, on the other hand, tend to migrate much further distances than crows, in part due to their need to escape disturbances like humans or dogs.

Blackbirds are monogamous and, although the female primarily builds the nest, both male and female will help raise the young.

Crows will eat almost anything smaller than them. This includes insects (plus their larvae), worms, fruits, grains, nuts, and even small rabbits! They sometimes also snatch eggs of smaller birds from their nests.

Blackbirds are a bit pickier in that they eat mostly fruits and grains.

Similarities between Blackbird vs Crow

If you’ve looked carefully at all the differences mentioned earlier, you can probably pick out a few things that are common to both blackbirds and crows. Other than their behavior, blackbirds and crows share similarities in almost every other category.

Blackbirds and crows are both, surprise surprise, mostly black in appearance. Other than their size difference and the minuscule colors found on blackbirds, it is very difficult to tell the two apart looking at them individually.

And finally, though crows have a larger palate than blackbirds, both enjoy the taste of fruits and grains. Also, because they both tend to inhabit urban areas, blackbirds and crows eat human-made food.

Are they the Same Bird?

Male blackbirds are unmistakable, for their yellow bill and yellow ring around the eye are easily identifiable. Females are a dark brown color, with streaking on the chest and throat. They can be easily found in parks, gardens, and grasslands, often listening for earthworms or feeding on insects and berries.

Crows are much larger than blackbirds, with long legs and thick necks. Unlike blackbirds, crows are black all the way (including the legs and bill) except when they molt, in which their old feathers can appear brown. Crows are more commonly found in open fields, woodlands, and forests, but may also be seen in urban areas such as lawns and parking lots.

Blackbirds and crows have adapted more and more to urban environments. If you happen to live in Europe or Australia, be sure to leave some apples or berries in your garden and you’ll surely be able to see for yourself!