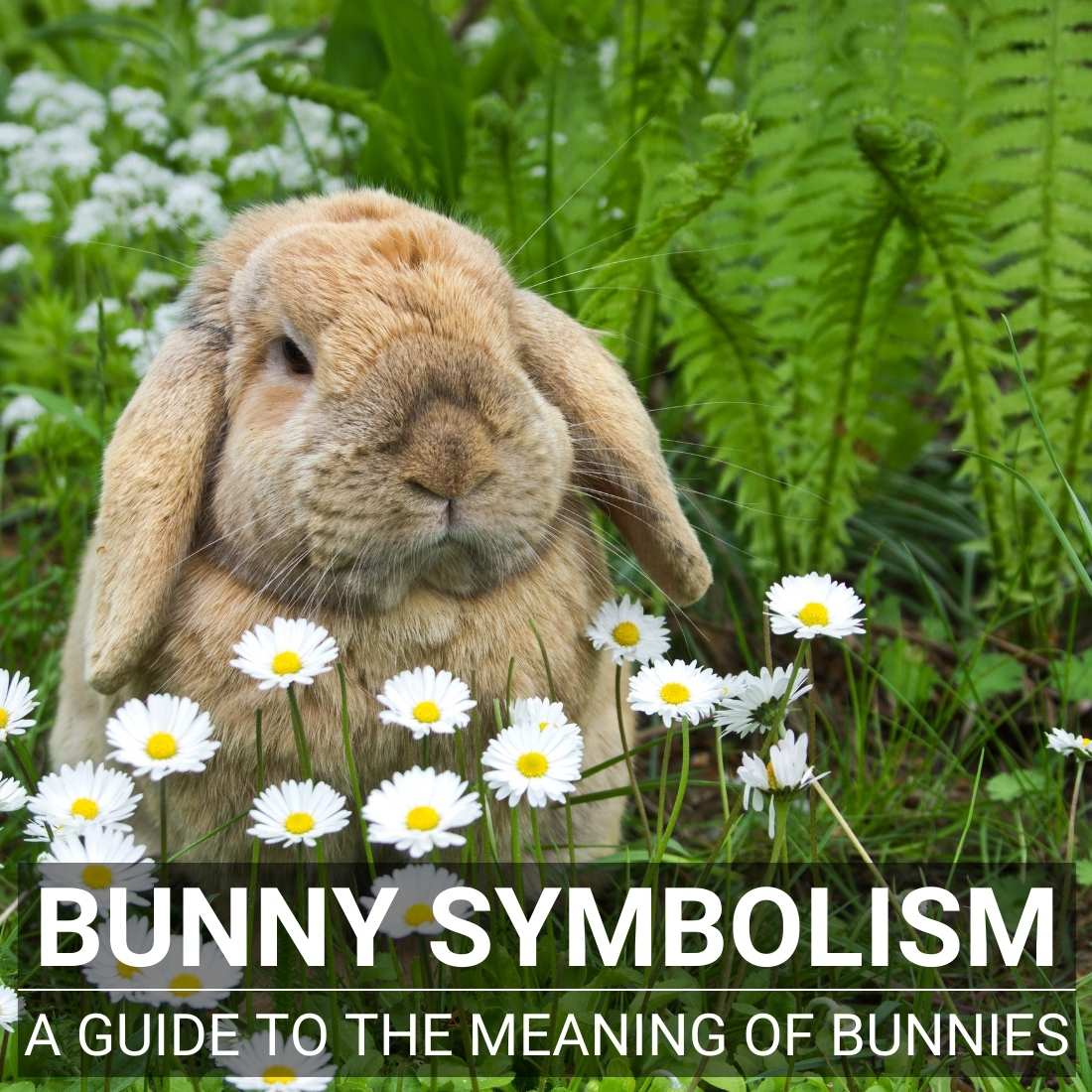 Hare-Style: The Symbolism Of The Bunny And Why The Playboy Logo Is Wearing A Tie

Adored for their extensive ears, fluffy tails, and the delightful way they hop, bunnies are some of the most wished-for pets in the world. A staple in petting zoos and yards, these big-toothed yet extremely lovable mammals are seen in various cultures to bring valuable spiritual messages and are revered as a symbol of good luck, fertility, and abundance. A significant and intelligent little creature that runs on cute, let’s hop in on the charming bunny symbolism to find out which ones can make you jump off your seat.

“Ideas are like bunnies. You get a couple and learn how to handle them, and pretty soon you have a dozen.”

What does a bunny symbolize?

There’s something special about bunnies. They’re cute, fluffy, and always seem to be happy. But what does a bunny symbolize? What is the bunny totem? And why do people consider them good luck? In this blog post, we will explore the symbolism and meaning of bunnies. We’ll discuss everything from bunny folklore to modern-day interpretations of these creatures. So read on to learn more about the symbolic bunny!

Perhaps because of its shy and gentle nature, we may often fail to notice a bunny’s symbolic meaning. However, this timid yet friendly creature springs into our lives with bold lessons that teach us how to be more protective of ourselves and the environment. Considered the lovable strong and silent type of character by many, here’s a look at what the cute bunny actually stands for.

1) A creature of high potency

Esteemed for their ability to produce up to 30 offspring in a year, seeing these highly likable creatures in the wild is a sign that you are ready to have children of your own. While they are known for their extraordinary capacity to copulate, the bunny’s presence could also mean that a litter of ideas are about to come flooding in and that you should be ready to act on each of them with great enthusiasm.

A fearful animal that never hops out of its den without a solid escape plan, bunnies are famed for creating complicated sanctuaries below the surface. Carving out a safe space where they store food for the frigid winter months, this remarkable trait has made these bashful creatures a symbol of prosperity and abundance, as well as a motivation for us to prevent waste for it ultimately helps us make it through periods of financial hardships.

As a small and gentle creature that lacks a formidable defensive feature, a bunny deeply relies on its smarts to recognize and avoid any possible threat. Since these animals are typically shy and fearful, they take full advantage of their impressive legs to leap into our lives and help us overcome our anxieties, all while remaining cautious and conservative.

Along with its capacity to build intricately designed retreats and escape danger only through its powerful legs and wit, the bunny uses its intelligence to detect predators and risks. These high-spirited creatures often come bouncing into our presence to remind us that our talents and skills are enough to resolve even the most daunting challenges and problems. Creative and undoubtedly clever, a bunny’s presence could be an invitation for us to tap into our artistic and imaginative side for it is a gift that was given to us by the divine.

5) Thinking outside the box

Using its keen sense and speedy nature, the bunny would instinctively dart off in winding and unpredictable directions to keep predators off course and aid its escape. This could indicate that the presence of the snoopy and analytical bunny is an encouragement for us to be more spontaneous and to try various strategies and ideas for they may bring fruitfulness and rejuvenation to what could be an uncertain situation.

What do Easter bunnies symbolize?

Much like Santa Claus at Christmas, the Easter Bunny brings loads of joy and delight to children who can’t wait to see what sorts of treats this fluffy and fabled creature left for them overnight. Since creating new life is considered one of their greatest strengths, the bunny symbolism has long been widely recognized as an indication of spring and fresh starts. After Christianity became more prevalent in Europe, the vernal equinox, or the period when the cold days of winter begin to fade, was connected to the death and resurrection of Jesus. Since the bunny is known for producing a large number of offspring, it doesn’t come as a surprise that it became an image of rebirth and restoration.

While the most popular image of Easter is that of Christ emerging from the tomb recovered and renewed, the bunny’s ability to create new life in great abundance reminds us about the importance of leaving behind the bitterness and pain of the cold and dark winter and to look forward to the happiness and warmth that the spring season brings.

What does the Playboy Bunny symbol mean?

Considered perhaps one of the most recognizable logos in entertainment, the Playboy Bunny has appeared on the cover of the world’s most popular men’s magazine since the 1950s. Chosen by the publication’s founder Hugh Hefner for the bunny’s sexual significance, Playboy features images of nude women to stimulate men to be more sensual. As the bunny appears to sport a tuxedo suggesting that it is a refined and sophisticated individual, it tells us that being playful, classy, and pure can help lead us to a world of satisfaction and pleasure.

In the wild, rabbits are seen as positive omens because they’re so cute and fluffy (as opposed to the dead rabbit symbolism). Having one cross your path is considered lucky for good luck in love or family matters too! Rabbits also have powerful spiritual totem animals powers with their abundant energy that can bring you closer to nature’s spirit realm – perfect if studying this semester gets tough 😉

So spiritual guides tell us that this creature is a symbol of good luck. The bunny symbolism is also associated with the moon and can represent fertility. In some cultures, the bunny is seen as a trickster spirit because of its ability to reproduce so quickly. But overall, the bunny totem is considered a positive force in our lives.

Do you have a bunny totem animal? Have you ever considered what this creature might symbolize in your life? The bunny is the perfect pet for those looking to have a little bit of fun with their life. The constant curiosity, eagerness, and willingness make them an awesome companion that will always keep you on your toes! Born under the sign of bunnies, you are always ready to have a good time. Your witty personality will get you in trouble one minute and then put your foot down on whatever issue comes up next as if it were nothing at all! You are also a natural-born leader that people are drawn to.

Meaning of dreaming of bunnies

Have you ever dreamt of bunnies? These creatures can represent a number of things in our lives. They may represent new beginnings, fertility, or even sex. Bunnies are also a symbol of springtime and rebirth. If you see a bunny in your dreams, it may be time to start fresh in some area of your life. Are you ready for a change?

The message of the bunny in your dream is one that inspires creativity and good fortune. These unlikely creatures can symbolize both successes as well as abundance, depending on how you look at them! If it’s positive then maybe today will be an excellent day to bring some new ideas into action- if not then perhaps count yourself lucky for having such great friends or family members who care about making sure everything happens smoothly without too much hassle.

The bunny symbolism has been a symbol of good luck and positive omens for centuries. In the wild, they’re seen as an embodiment of all things cute and fluffy. But there’s more to these creatures than meets the eye. Bunnies are also associated with the moon and can represent fertility. In some cultures, they’re seen as a trickster spirit because of their ability to reproduce so quickly. But overall, the bunny totem is considered a positive force in our lives.

Since people that call on the bunny totem to serve as their guide tend to be unpredictable and impulsive, the rabbit, which more or less represents the species as a whole, displays the more profound characteristics of a bunny. Boasting a vision that roughly covers 360 degrees, these vigilant and watchful creatures stir us to be alert and intuitive of the dangers that may lie ahead. Equipped with a pair of steadily growing front teeth which they constantly use for chewing, the rabbit represents our reflective nature, which we employ to nibble on and break down the details of certain situations to empower and help us realize our dreams and ambitions.

A positive symbol of wealth, fertility, and good fortune, these guarded yet friendly animals would often leap in with messages that help us remain still, gentle, and calm. While a great number of cultures believe that a rabbit’s foot can bring luck aplenty, all it really takes for us to gain a life of fruitfulness and productivity is to hop on the bunny symbolism.