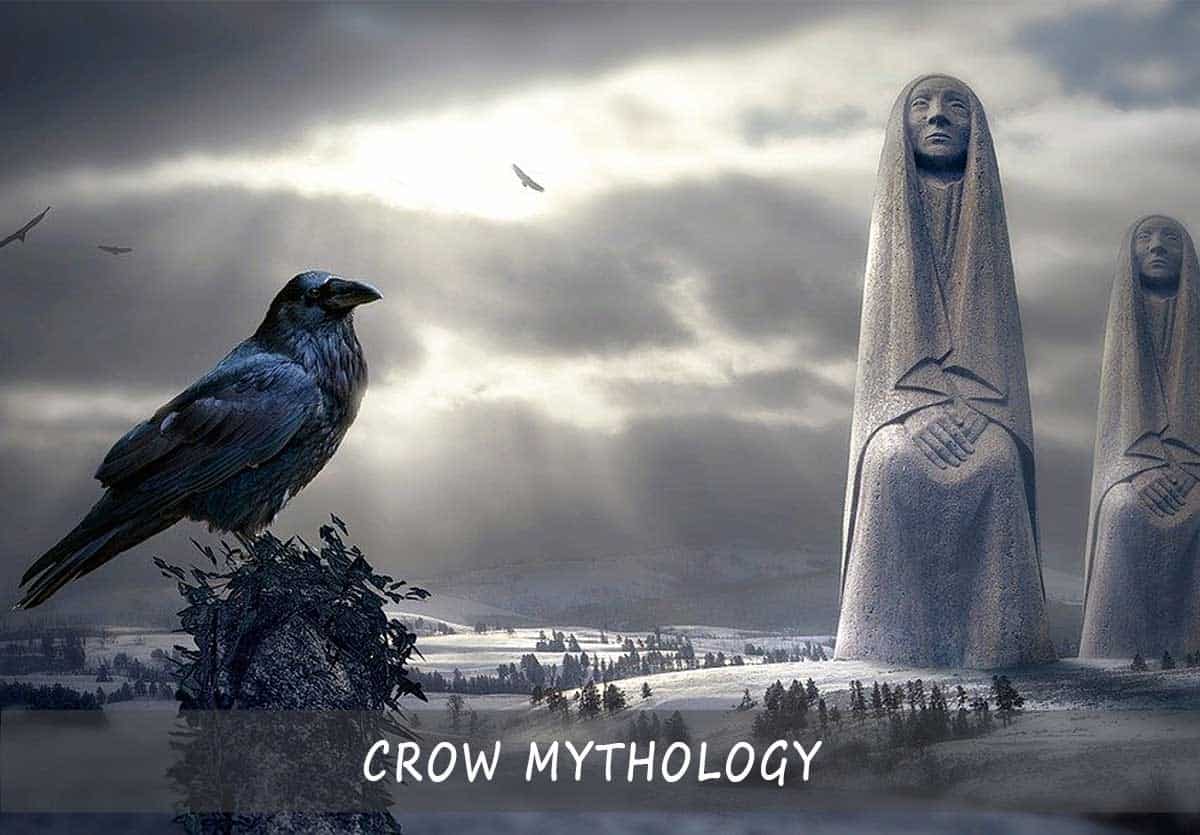 In Native American culture, the crow is considered to be a trickster among other things. It has been said that the Crow tribe was created when an old woman placed her grandson into a hollowed out log and he turned into a crow. Crows are the ubiquitous birds with black feather that are regarded as scavengers. These are variously considered to be harbingers of bad omen in some cultures while in others, these are viewed as representatives of the Divinity.

The stories about crows are plentiful, but what do they mean? In this post, we will explore some of the most common myths and beliefs about these fascinating creatures!

Intellectual is a parrot; wise man is a crow. One is repetitive; other is creative!

In Scandinavian legends, crows are a representative of the Goddess of Death, Valkyrie, one of the maidens of the Norse deity Odin who preferred that heroes be killed in battle and showed their souls the way to Valhalla. It is the crow that provides Valkyrie with important information, as can be seen in the Poem of Haraldr.
Two crows are found to be perched on the seat of the Norse deity Odin. Munnin, the Memory and Hugi, the Spirit. They represent the principle of creation. They are said to travel across the globe and bring back news of earthly events to Odin. They sit on the shoulders of the God. The Raven, a bigger version of crows, is regarded by Apollo, the Greek God, as a sacred bird.

The crow symbolism is incredibly significant in the Hindu ceremonies that are associated to ancestors. The bird has an important place in Vedic rituals.

In the Hindu epic ‘Ramayana’, it is mentioned how Lord Rama, during his 14-year exile, was staying with his wife Sita Devi and Laxman, his brother. Away from the society, they were roaming about in many mountains, jungles, and forests. Their lives were in constant danger during this time, and they were bothered by ghosts, demons, and wild animals.

One afternoon, Lord Rama was resting with his head on the lap of his wife. Suddenly, a large crow started bothering Sita Devi with its beak. The latter got startled, immediately waking up Lord Rama from her nap. When Sita told her what happened, he gathered his arrow and bow. He soon understood that this was not any normal crow, but Jayant – the son of Lord Indra disguised as a crow. He had come to flirt with his wife.

An angry Lord Rama proceeded to kill Jayant, who immediately begged for forgiveness. Taking mercy on the disguised crow, he gave a unique punishment that was also a boon. He targeted a magical arrow to Jayant’s eye.

From then on, the crow could use just one eyeball – and not both – at a time. But anything that could not be seen by any creature with two eyes could be visible for this bird. The crow could now see unsatisfied souls and ancestors. Anybody who fed the bird during Pitru Paksha, or the time of honoring ancestors, would be able to satisfy his ancestors. The bird also came to have a long life.

This story from the Hindu epic ‘Ramayana’, narrating incidents that supposedly occurred around 85,000 years back, forms the basis for the significance of crows in Hindu rituals that honor ancestors. Many other folk tales, legends and myths regarding crows can be found in many other parts of the Hindu epics ‘Ramayana’ and ‘Mahâbhârata’, as well as in many fables, poems, and classic pieces of literature in India.

The messengers of death are compared in the Indian epic ‘Mahâbhârata’ to crows. Time and again, the bird is found to appear at various sections of the epic as the messenger of death (read here about the symbolism of a dead crow). Many folk tales, legends, and myths regarding crows can be found in many other parts of the Hindu epics ‘Ramayana’ and ‘Mahâbhârata’, as well as in many fables, poems, and classic pieces of literature in India.

In India, there are myths regarding crows in India. According to a legend, crows got the power to foretell and inform humans about impending things. Thus, there is a belief in India that if crows land on balconies and start making noises, some guests would surely drop into your place uninvited or unasked. These birds try to make hosts know about the coming of an unwanted visitor or relatives by making annoying sounds. In some places in the country, there are quite a few superstitions regarding the cawing of crows.

The bird has prophetic functions in Celtic civilization. It is also sacred for the Celts and stood for flesh ripped off due to combat. Morrighan, the warrior goddess, often appears in Celtic mythology as a raven or crow or is found to be in the company of the birds.

These birds generally appear in Celtic mythology in groups of three. The presence of these birds is a sign that Goddess Morrighan is watching, or she is possibly preparing to pay a visit to someone.

Crow in Native American culture: According to many Native American tribes including Navajo Indians who live on Arizona’s Lakota Nation Reservation, there were two brothers which represented day and night as well as good and evil respectively. One brother would take over the world during daytime while his counterpart watched from below at night time; both ruling continuously for eternity until a crow, who could see in both worlds, stole a piece of the sun to make it into daylight. The brothers fought over this and created the crow’s black feathers as they tore at each other while trying to get back what had been taken from them.

In some Native American legends, crows are considered to be messengers to the other world where they carry messages for the deceased person’s family who have passed away. They also may bring healing medicines or food to those in need with their journey between worlds. These animals can allegedly foresee what is going on within human communities because they watch people closely; therefore, many believe there must be truth behind this myth!

The Klamath tribe in Oregon has many myths which involve crows as well. One story tells us that when someone dies, their spirit leaves as a bird to go up into heaven with the Creator’s other children (birds). The Crow was given this role because it could fly up high enough so it would not be afraid of falling off its perch.

Crows in Germanic and Viking Cultures

Germanic cultures believe that crows are psychonomes, meaning the act of guiding spirits to their final destination.

Crow feathers were highly valued in Viking Age cultures for use in ceremonial rituals and clothing. It was believed among Germanic tribes that a crow feather could cure up someone who had been bewitched or protected them from being hexed by another person.

In England, crows are mainly seen as a nuisance. They’re loud, they chase away other birds, and their excrement can be dangerous to health.

In ancient Greece, crows were considered to be the souls of people who have committed suicide. They are seen as both dark and positive creatures, often with a link to death or bad luck.

In ancient Greece, crows were considered to be the souls of people who have committed suicide. They are seen as both dark and positive creatures, often with a link to death or bad luck. When a crow was seen in the daylight it meant that death was nearby.

At other times, they were seen as a positive sign of good fortune because if you kill one crow and then find another before coming back to where your original encounter took place, this would mean that you will be rewarded for killing the first one! It is said that crows are also messengers from the gods who bring messages between them and humans across time or distance.

In some Greek stories, however, crows are considered to be evil creatures with human-like intelligence but black feathers instead of white ones. This is known as “crow magic.” The most famous story about a cunning Crow comes from Aesop’s Fables called ”The Fox and the Crow”. In the fable, a crow has found a piece of cheese and retired to a branch to eat it. A fox, wanting it for himself, flatters the crow, calling it beautiful and wondering whether its voice is as sweet to match. When it lets out a caw, the cheese falls and is devoured by the fox.

In China, the crow is a symbol of luck and is depicted with the crane. In China, you can find these two animals together on many pieces of artwork.

The Chinese believed that the crow was a caretaker for ancient sages who were masters in meditation and Daoism which translates to Taoism-the way or belief system. The crows would watch over them as they meditated so they didn’t have to leave their bodies unattended while seeking enlightenment.

In some myths, it is said that because there are three kinds of Crow—male, female, and mixed-gender—this means that has something to do with perfecting oneself through trial, error, and experience. And when one became enlightened all other birds would gather around him/her.

In Islamic cultures, the crow is considered to be a bad omen. In the Quran, it is stated that crows are one of four birds that should never be eaten because they eat carrion and other impure things – this includes vultures as well. It has also been said in Islamic folklore that if you see a crow on your right side, then happiness will come to you soon; however, if it’s on your left side, then sadness will follow shortly after.

At times, crows appear as a way of prophecy and divination. The birds were viewed in a few mythologies as signs of bad things to come. However, in others, these are regarded as gods’ messengers. In some legends and folklore, the bird often shows up as a trickster.

According to myth, King Arthur of the Round Table English tale did not die but was changed into a crow or raven by magic. According to some legends, in case the Tower of London is deserted by all the surviving Ravens, it will fall, and the English monarchy will meet a terrible end. Thus, the Tower’s “Beefeaters” pet a group of Ravens in the building – just to be on the safe side.

[Video] Ravens and Crows in Legends and Folkore

→ Check our comparison: owl vs crow.

1 thought on “Crows in Mythology: Best Stories and Beliefs”