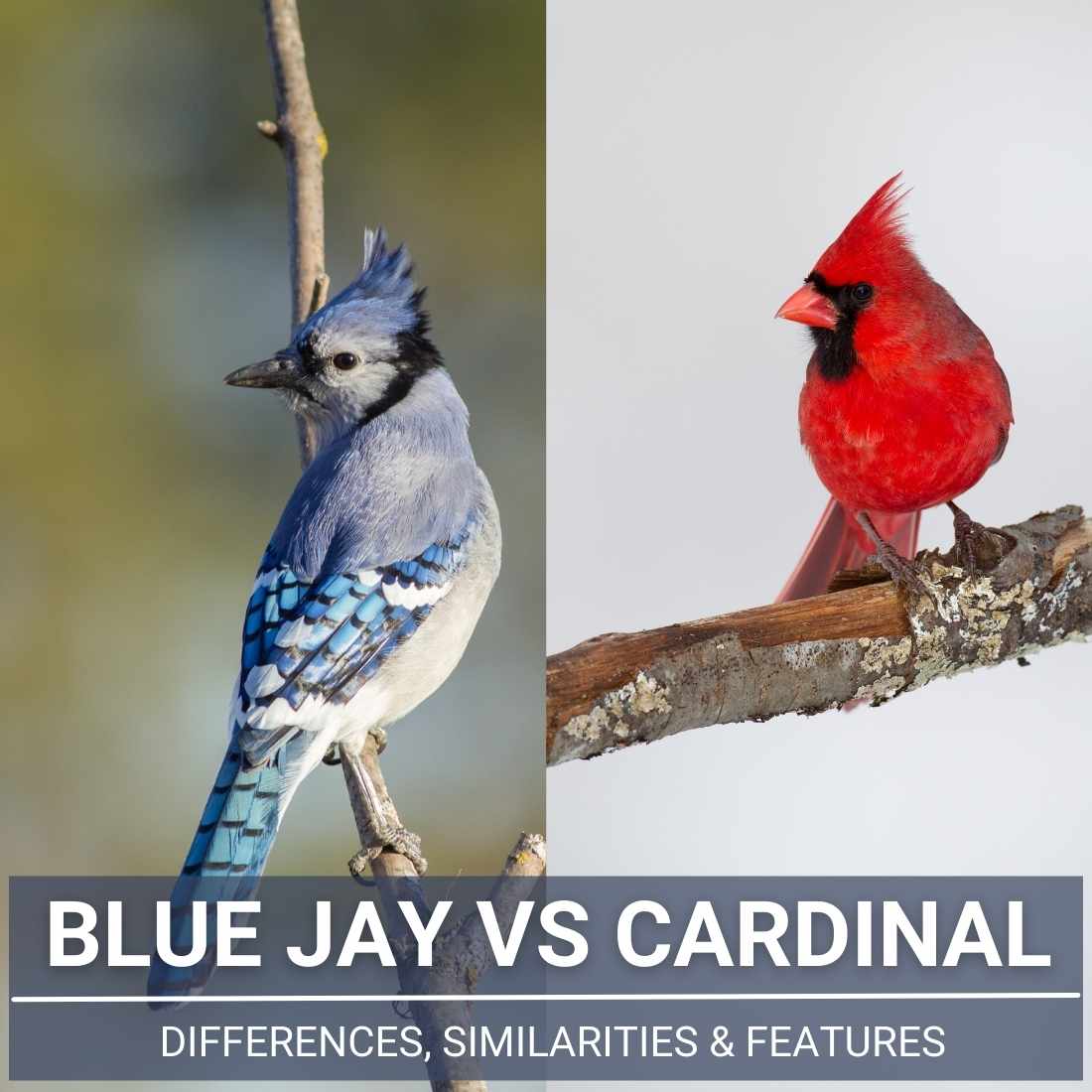 Blue Jays and Cardinals are both very beautiful birds. However, it is a fact that Blue Jays don’t get along with cardinals because of their high levels of intellect. They have the ability to manage and control events to their advantage, which is especially true when working in a group. So, they think other birds (especially Cardinal) are at a lesser level – intelligence-wise.

There are numerous other distinctions and similarities between these two birds. Let us discuss them all!

Differences between Cardinal vs Blue Jay

Cardinals and Blue Jays both have lovely patterns and coloration on their bodies that complement each other, but the red color is predominant in the Cardinal compared to Blue Jay, which has a dominating blue color (as its name suggests). The blue jay has a blackish-blue and a whitish belly, whereas the Cardinal has a red back with a whitish belly.

The blue jay has blue, white, and black patterns on its wings and tail. When the wings expand, you can see the inside of the wing is coated with white. This is one of the most distinguishing characteristics of these birds.  The back, wings, and body of the Cardinal have a dark red and brown coloration.

Both birds have a prominent crest that may be lowered at their relaxation. Although both have a little black on them, the distinction resides in where the black is concentrated.

The blue jay has a prominent black ring around its neck, which gives the appearance of a necklace. The Cardinal has a black band around its beak that gives the impression that it is wearing a mask.

Aside from the differences in coloration, patterns, and markings, the two species have a few other distinguishing characteristics. So continue reading.

While the average length of the two birds is around the same, ranging between 20-25cm, their bulk is significantly different. A blue jay typically weighs between 65 and 110 grams, but a cardinal weighs around 43 grams on average.

Both birds have a powerful bill, but when you look at them carefully, you can see that they are anatomically different. The Cardinal’s beak is small and thick, while the  blue jay has a bill that is straight and a little long

Contrary to popular belief, not only are the Blue Jay and the Cardinal members of separate genera, but they are also members of distinct families, as well. In scientific terms, cardinals are members of the Cardinalidae family, which is comprised of members of the cardinal order. The blue jay is a member of the Corvidae family of birds, which is formally known as the crow family.

Blue Jays may be found in various habitats, although they are most commonly seen in and around oak trees. These species are more common around forest boundaries than they are found deep in the trees.

Cardinals may be found in various habitats, including woodland edges, grassy lawns, trees and shrubs, back gardens, and well-landscaped areas.

Cardinals build their nests in dense foliage and look for platforms to sing from that are conspicuous and relatively high in the sky.

Even though both birds are classified as songbirds, their vocalizations are quite different. The blue jay has a mellower voice and almost sounds like a whisper compared to the other birds. The Cardinal’s song sounds just like someone is whistling if you listen closely.

Singing over a longer amount of time is characteristic of the blue jay, with a single song lasting as long as 2 minutes. The song of a cardinal is short, lasting just approximately 2-3 seconds on average.

Cardinal’s song comprises a long succession of clear two-parted whistles that are periodically accelerated before culminating with a progressive treble at the end.

The food of the two birds is perhaps the most noticeable distinction between them both. Cardinals are granivorous, meaning they eat grains, seeds, and fruits.

On the other hand, Blue jays are omnivores, meaning they eat almost anything. In addition to cereals, they eat frogs, mice, and nuts, among other things. However, the most remarkable aspect is that blue jays have been observed eating the eggs of other birds, which is rather unusual.

Some other notable differences in Cardinal vs Blue Jay:

Similarities between Cardinal vs Blue Jay

There are many similarities between Cardinal and Blue Jay, such as both birds belong to the same order, ‘Passeriformes,’ and that the males of both species are in charge of guarding their territories and their unborn eggs during mating season. Both of these birds are regarded as the most energetic members of their respective species. Both birds have lovely patterns and hues that complement each other on their bodies.

Aside from that, the Cardinal and the Blue Jay are both known to make quite a loud sound when they sing. Both of them have stunning vocals and enticing music. People throughout the world are enthralled by the beauty and incredible speed at which these two bird species fly.

Interesting facts about the Cardinal

One interesting fact about Cardinal is that it is one of the few species in which the female sings along with the male. A couple of cardinals may even exchange song phrases, which they may use to communicate with one another throughout the nesting season. Female cardinals will exchange songs with a possible suitor back and forth.

Other facts about Cardinals include:

Here you can check all Cardinal sounds

Interesting facts about the Blue Jay

Blue Jays can make a wide variety of sounds, and it is common to hear them imitate hawks, notably the Red-shouldered Hawk, in their natural habitat. According to ornithologists, they do so to lure hawks in the vicinity. In terms of appearance, male and female blue jays are identical. This is a somewhat rare thing in birds, and it is referred to as sexual monomorphism.

Other interesting facts about blue jays include:

Here you can check all Blue Jay sounds

The interesting thing about Cardinals and Blue Jays is that besides having huge differences between them, they both belong to the same bird order, known as ‘Passeriformes.’

We also compared the Bluebird Vs Blue Jay as well as Red Robin Vs Cardinal – in case you’re interested.