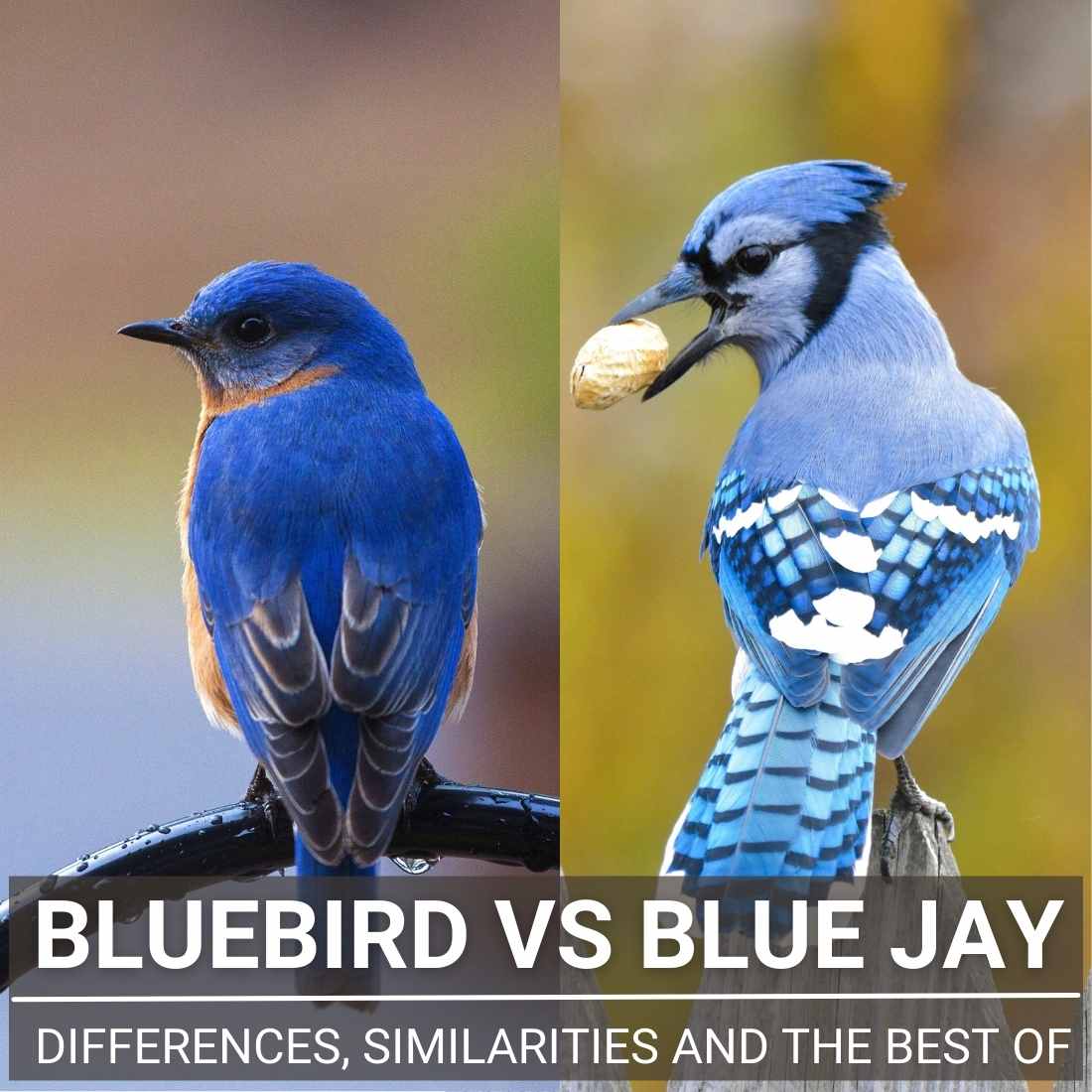 The human eye usually overlooks minute characteristics that identify one bird from another. This optical illusion sometimes mystifies people who watch birds in flight. The Bluebird and Blue Jay are two of the most usually misunderstood birds owing to their similar look. The objective of this post/article is to train human eyes on how to notice such minute distinctions and accurately identify the bird in front of them in order to develop into an experienced birdwatcher!

If you like the color blue, either of these birds will appeal to you (see more birds that are blue). The eastern and western bluebirds both have vivid blue plumage that contrasts with a reddish-brown breast, and both are considered to be endangered. The male mountain bluebird is distinguished by its sky blue body, head, and wings, as well as its white belly. Unlike the male, the female has a more subtle coloration, with a brownish tone blended with blue covering her whole body. The length of a bluebird is between 6.5 and 8.5 inches.

On the other hand, the blue jay is bigger, with a wingspan ranging from 10 to 12 inches. Unlike the Bluebird, he has a white or gray breast that is crowned with blue plumage, making him showier. His distinctive crest on his head also helps to distinguish him from the crowd.

The blue bird’s name specifies where he can be found; the eastern version can be found east of the Rockies, spanning from Canada to Honduras, while the western form can be found west of the Rockies, spanning from Canada to Mexico. The mountain blue bird’s range extends into the eastern and western blue bird’s territories.  The mountain bluebird may be found in agricultural regions and tree groves, but the western Bluebird prefers open forests. The Eastern Bluebird may be found in open land with trees and is prevalent in pastures, suburban parks, backyards, and fields.

Compared to all Bluebird species, the blue jay may be found throughout most North America, with its range steadily expanding into Northwest America. He may be found in woods — though he favors forest margins over the deep forest — as well as urban and suburban regions, according to his preferences. Oak trees and bird feeders are among his favorite landscaping features.

All bluebirds have the ability to mate more than once throughout the course of the year. The Eastern Bluebird lays two to seven eggs in a clutch, which hatches in two to three weeks and can live for up to three years. Unlike the mountain bluebird, which has a bigger clutch ranging from four to eight eggs, the western blue bird’s clutch ranges from two to eight eggs, depending on the size of the nest. When compared to its eastern cousin, the hatching time for their eggs is around two to three weeks. While t the blue jay only mates once a year and produces a clutch of two to seven eggs, which she will incubate for about three weeks before hatching them.

Despite their preference for insects, all three bluebirds will consume fruits such as blueberries, raspberries, and currants.  Spiders, caterpillars, beetles, and crickets are among the insects that make up these birds’ staple food. On the contrary,  blue jay has a reputation for being a thief of food; however, this is mostly incorrect in the majority of cases. Instead of stealing nests for eggs or nestlings, this chap likes to eat nuts and seeds, which he gets from various sources. He will consume insects such as grasshoppers and beetles, as well as other small invertebrates.

Some other notable differences between Bluebird vs Blue Jay

Similarities between Bluebird vs Blue Jay

Many similarities exist between the two species, such as the fact that they both have varying degrees of blue plumage and that they are both Omnivores, which means that they consume both plants and insects.

Furthermore, both the Bluebird and the Blue Jay are considered to be singers. They both have beautiful voices and appealing music. Both bird species have extraordinarily fast flying speeds, and people are fascinated by them.

Bluebirds, including the eastern, western, and mountain bluebirds, are distributed across North America. All bluebirds nest in cavities and will use a man-made nest box. For many years, habitat and nest cavities were dwindling, but bluebirds have made a remarkable recovery due to the installation of thousands of bluebird nest boxes across the country.

March to August is the nesting season of Bluebird. The female alone incubates the four to six eggs, which she keeps at 98 to 100 degrees Fahrenheit until hatching.

Here you can check all Bluebird sounds

Blue Jays can generate a wide range of noises, and it is typical to hear them imitating hawks, particularly the Red-shouldered Hawk.  According to ornithologists, they do so for one of two reasons.  The first is that the imitation serves as a warning to other jays regarding the presence of any lurking hawks. The second reason is that jays are attempting to deceive other species into believing that hawks are around.

Here you can check all Blue Jay sounds

Bluebirds and blue jays have significant distinctions. Bluebirds are well-known for their low-pitched, warbling songs, while Blue Jays are known for whispering tones, clicks, whirrs, chucks, and whines. The other important thing is that most blue jays have crests on their heads, whereas bluebirds have smaller beaks and tails.

In case you’re interested in further reading – we also compared the cardinal vs blue jay.