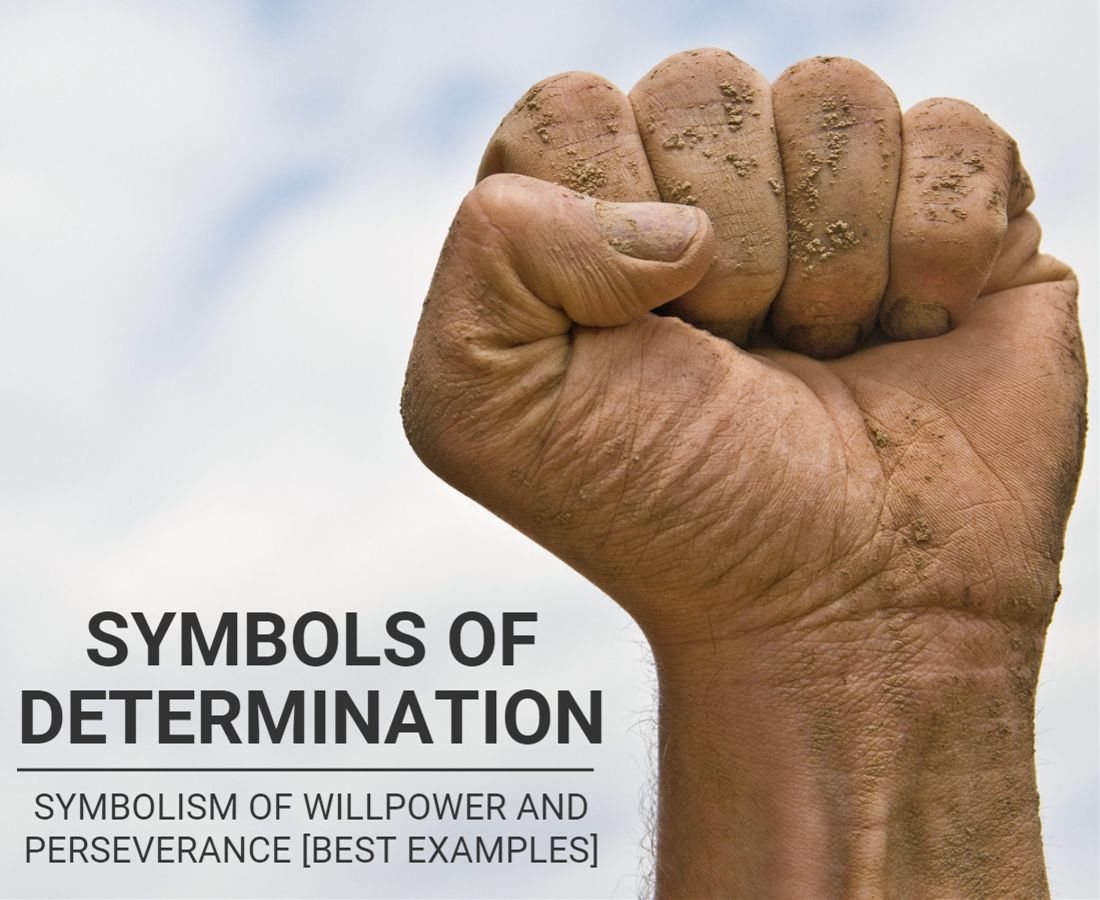 Most of us consider life a journey full of adversity and trials. However, it has been proven that the slightest persistence helps keep us motivated to achieve our goals. While a lack of willpower may lead us to give up on things we want the most, having a solid mindset allows us to overcome challenges that are against our best interests.

Regardless of the number of times you fail, these symbols of determination can make a huge difference by boosting your willingness to work and making you eager to pursue your goals.

“America was not built on fear. America was built on courage, on imagination and an unbeatable determination to do the job at hand.”

Known as a mythical bird that sports dazzling gold and flaming red feathers, the phoenix’s ability to burn itself and rise from its ashes makes it a beloved symbol of rebirth, renewal, healing, and determination. Described to have a crest of blue and silver feathers on its head, it is a powerful bird of prey that is more striking than an eagle.

Legend has it that the phoenix lives for about 500 years before it bursts into flames and rejuvenates itself, symbolizing immortality, tenacity, and perseverance.

An imposing figure that has accompanied humans for centuries, the mighty oak is one of the most honored trees in the world. Playing a critical role in many mythologies, this towering tree’s amazing strength and durability led various cultures to view it as a symbol of wisdom, endurance, and determination.

Ancient warriors identified themselves with the traits of the oak tree, often channeling its knowledge and resistance in battle. Truely a good example of a symbol of determination.

Deriving its name from the Irish word “doire” which means “oak tree,” the Celtic Dara knot’s complex knot work is based on this colossal tree’s magnificent root system. This intricate symbol indicates survival, consciousness, and determination.

Apart from giving us courage in times of significant challenges, the Dara knot reminds us that we have the strength and knowledge to remain stable regardless of the circumstances.

Admired for her fierce defense of her daughter, Persephone, the Greek goddess Demeter inspires us to stand firm and determined even when faced with trouble and misfortune. According to myth, when Hades abducted her daughter and brought the girl back to the underworld, Demeter relentlessly searched the world day and night with nothing but a torch.

Finally reunited with her daughter, this story signifies how times of great sorrow are followed by great joy through great persistence.

Bearing a familiar image that shows a man carrying the weight of the world on his shoulders, Atlas is a powerful Titan well-known across Greek mythology. Legend tells us that upon their defeat at the hands of the Olympians, his role in leading the rebellion urged Zeus to condemn him with such a severe punishment.

Atlas is known for his incredible knowledge of . His task was to maintain the separation between the Earth and the heavens, making him a powerful symbol of endurance and determination.

Typically represented by a bull, those born under the Taurus sign are known for their intensity, passion, and determination. Much like the animal that represents them, many admire Taureans for being hardworking, dedicated, and stubborn.

The second of the 12 astrological signs, they don’t back down from hard work and are willing to take on anything to get the job done. The Taurus awakens our ambitious and hardworking nature.

While we have all been fascinated with how Ancient Egyptians held jewelry in high regard, certain gemstones were seen to open their minds to the future or even protect them from harm. A famous symbol of nobility, devotion, and love, Egyptians saw rarity and the difficulty of finding diamonds as a symbol of power, determination, and resistance.

Often used to ward off evil spirits and to prevent nightmares, the Peridot is also known to inspire steadfastness and dedication. Its association with the sun and its life-giving rays motivate us to go after the things we have always longed for.

In African culture, Kwanzaa is widely considered a time of commemoration, observance, and celebration. During the week, families and communities come together to honor their ancestors, reaffirm their bonds, and share a great feast.

Kujichaguila symbolizes the African’s long-enduring fight against adversity and discrimination. This tradition also reminds them of their forefather’s determination to take control of their nation’s future.

A symbol of the importance of fishing to the Maori, the Hei Matau or “fish hook,” has long stood for prosperity, safe travels, and abundance. By highlighting their close connection to the sea and the rigors of fishing, this stylized fish hook has come to represent the Maori’s strength and determination.

Using only a woven line and a hook crafted from his grandmother’s jawbone, legend tells us that the North Island of New Zealand was once a colossal fish caught by the great seafarer Maui. Apart from its ability to bring in good fortune, the Hei Matau signifies the Maori’s connection to Tangaroa, God of the Sea.

Water plays a significant role in many civilizations and our lives. It is known for its ability to help us survive and thrive. Vast and constantly on the move, it has inspired many throughout history to remain steadfast, determined, and persistent.

Water can take on any form and still flow downstream. Although it takes up to 1000 years to break stones, it does so eventually. Water adapts its shape to fit its environment, reminding us of our need to be flexible, responsive, and persistent.

The lotus flower is admired for its ability to emerge all clean and pretty despite being in dark and murky waters. It has long been held as a symbol of purity, rebirth, and determination. Featuring a thin layer of protection that keeps out debris and water, it reminds us how we can go through our hardships unscathed.

The lotus flower grows in muddy water yet emerges pristine. It gives us the courage to remain calm even when faced with difficulties and stress. One of the best symbols of determination around.

The popular children’s story “The Turtle and The Hare” tells us how slow and steady eventually wins the race. Their tenacity in carrying an oversized hard shell on their backs shows that turtles never give up, even when faced with seemingly insurmountable odds.

Turtles motivate us to trust in the process and not skip steps. Their persistence and determination teach us that being stronger and faster than others does not guarantee success.

Throughout history, the eagle has been a revered figure, representing bravery, freedom, and strength. Its ability to soar through the air and relentlessly swoop down at its prey led various cultures to see these hunters as symbols of great willingness and determination.

A powerful bird that flies high above the rest, these majestic flyers inspire us to be unwavering in our pursuits, aim for greatness, and achieve greater heights.

Geranium flowers offer a host of symbolism, including trustworthiness, firmness, and dependability. Their colorful blooms represent all things satisfying and pleasant in life.

Found in the subtropical regions of Asia, Africa, and Europe, the geranium’s ability to adapt well to its environment makes this sweet-scented flower a symbol of inspiration, persistence, and inner strength.

Featuring a term originating in shooting competitions in 19th century England, the arrow and bullseye symbol indicate our need to remain directed and focused. It tells us that when we are centered and determined, we can use our capabilities in the best possible ways.

The arrow and bullseye indicate that persistence allows us to be most skillful, strategic, and valuable.

Typically illustrated as the wires lined up when a shooter aims a gun, crosshairs are an optical piece that brings an image into focus. It inspires us to remain fully conscious, attentive, and determined. Apart from making our work and activities extremely enjoyable, a weapon’s crosshairs enable us to achieve our desired results.

This symbol of determination teaches us how to focus fully on making positive progress.

Characterized by a clenched fist pointing upward, the raised fist has been used to show solidarity and support for many political causes. Often seen as a sign of defiance, it is used by various groups to symbolize unity, determination, and empowerment (see symbols of empowerment).

Known to have been first used in an illustration titled “Solidarity” on June 30, 1917, the raised fist urges us to be determined in our personal and professional lives and to focus on achieving bigger and better results.

Widely recognized as one of the most influential spiritual and political leaders, Mahatma Gandhi is honored across India for pioneering resistance to tyranny through non-violent civil disobedience. His resistance and determination, while instrumental in liberating his country from foreign occupation, frequently landed him in prison.

Later gaining the name Mahatma which translates to “great soul,” Mohandas Karamchand Gandhi’s struggle inspired millions to fight for and achieve equal rights for their people.

Practiced by countless entrepreneurs, artists, and leaders, stoicism is a branch of philosophy that inspires many to be happier, more virtuous, and highly determined. From the Roman Emperor Marcus Aurelius to George Washington and Thomas Jefferson, the Stoics are a group of distinguished men that stir us to be wiser and better individuals.

They taught us that determination makes us more skillful and responsive to even the most unfavorable and taxing situations.

For years, people have viewed the image of a lone man with shopping bags in both hands standing in front of a column of army tanks with awe and fascination. Recorded in Tiananmen Square in China, this now iconic stance is recognized worldwide as a symbol of bravery, resistance, and determination. Simply known as Tank Man, this mysterious and still unidentified individual shows the rewards of being highly persistent.

Inspired by the story of a legendary Greek messenger, running a marathon requires hours of training, discipline, and a heart full of persistence and determination. A sporting event involving a 40-kilometer run teaches us how to keep going and never give up, even when life gets exhausting and tiresome.

Although the original runner died from fatigue, his tenacity is perhaps one of the most endearing symbols of determination.