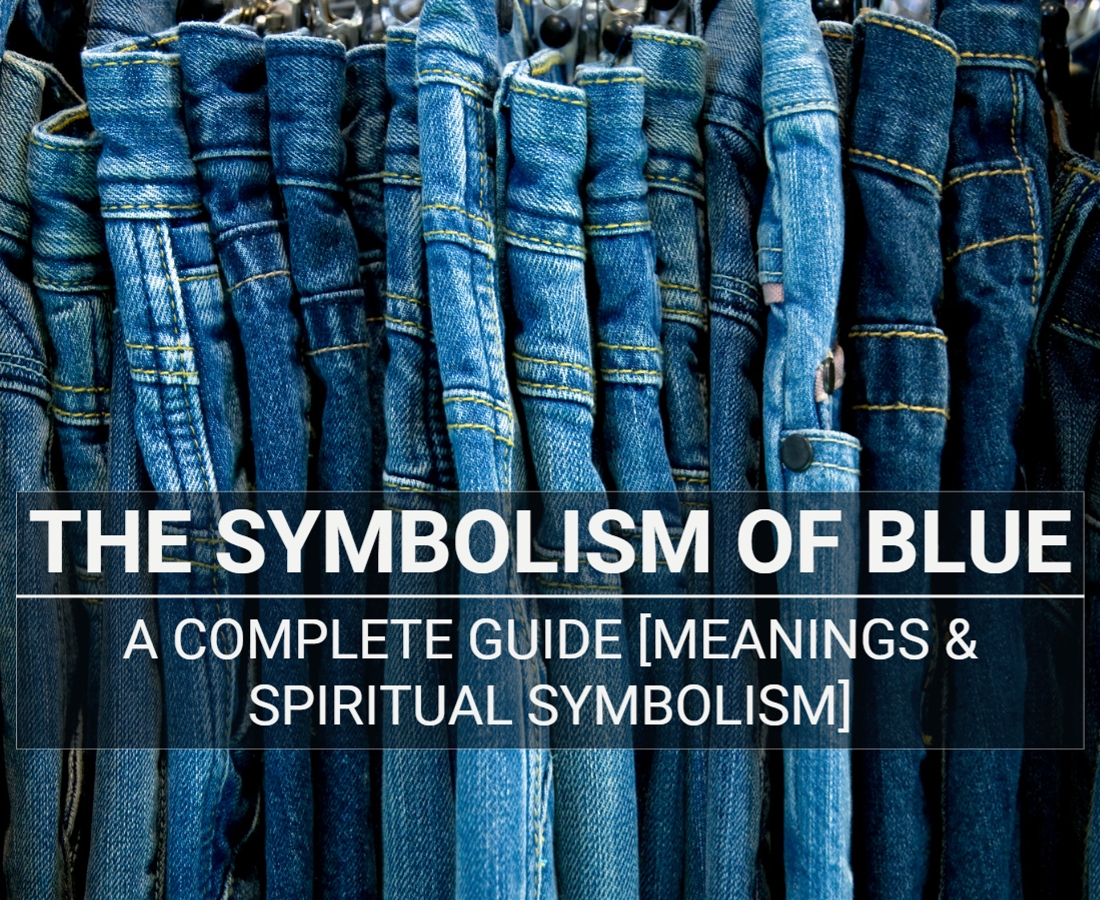 Blue-Chip Signs: The Symbolism of Blue

Whether watching the waves of the vast blue ocean or looking up at the boundless blue skies, blue is one of Earth’s most common and favored colors. A color that symbolizes freedom, sensitivity, and calmness, it has fascinated cultures and traditions for centuries and inspired countless creative minds.

From the blue moon, a blue light, and the calming effect of a blue background, our list of the symbolism of blue will show why this shade remains one of the most common and popular colors.

What are the origins of blue, and how was the color blue made?

Believed to have been developed in ancient Egypt, evidence shows that Egyptians combined minerals, limestones, and sand to create a blue opaque glass to use for the Great Pyramid. Known to be the first blue pigment, the Egyptians intricately manufactured the mineral azurite. They spearheaded its distribution throughout the ancient world.

Quickly gaining popularity and was widely used for arts and fashion later, the discovery of a method where blue dye is extracted from the leaves of plants made it a popular and expensive pigment for centuries to come.

“A certain blue enters your soul. A certain red has an effect on your blood-pressure.”

Psychological meaning and effects of blue

Did you know that the dominant color in your surroundings can influence your emotions and state of mind? A color that tells us to relax and keep calm, here’s how the blue color in your space may be playing its part.

How the color blue affects you physically and psychologically

Often associated with the sea and the sky, many perceive the color blue to transmit feelings of coziness, serenity, and calmness. While it is also considered a color symbolizing courage and determination, tradition suggests that blue inspires spiritual reflection, deep understanding, and wisdom.

Highly associated with a period of peaceful rest, the blue color is known to lower our heart rate, body temperature, and blood pressure. It can also positively affect our pituitary gland, resulting in better sleep patterns.

From American Express and Ford to Facebook and Oreo, blue is at the top of the list of the planet’s most commonly used corporate colors. Known to represent trustworthiness, knowledge, and accessibility, about 33% of the most popular and influential brands use the color blue on their logo.

It is often associated with cleanliness and is the best color for promoting household products. Its ability to indicate coolness makes it the color of choice for brands that sell drinks and refreshments.

Throughout history, colors have helped shape our beliefs and judgments. Here’s a look at the various meanings of the color blue worldwide.

Adopting the color of the sky, people often associate blue with heaven and the healing power of God. A color that symbolizes truth and the Holy Spirit, it encourages us to deepen our understanding of the scriptures by digging deeper into the Bible’s pages.

Blue represents the Virgin Mary and is recognized as the color of peace and hope. And blue birds are sometimes considered messengers of god.

Developed from copper with a mix of silica, iron oxides, and calcium, Egyptian blue signifies fertility, birth, and rebirth. Commonly referred to as irtiu or khesbedj, it was widely used to indicate the presence of water, which closely associates it with the river Nile. Donning tattoos and amulets in blue, Ancient Egyptians considered blue the protection color.

Giving great value to colors, Native Americans trusted the blue color’s ability to affect people’s frame of mind and emotions. Often used in religious ceremonies, many of their tribes saw the blue color’s deep connection to life and nature.

Blue takes the color of the sky and the heavens. People recognize blue as the color of serenity, enlightenment, and spiritual healing.

Worn by Saint Louis of France in the 13th century, people saw blue as the color of the powerful, the fashion-conscious, and the wealthy in European cultures. Many once believed that blue clothing was limited to the nobles. The elegant-looking blue business suit has its roots in 17th-century England, becoming the outfit of choice of English merchants and country gentlemen.

The color of royalty and the elite

Many countries adopted blue to represent the elite and the royals, taking their cue from the French monarchy. Eventually becoming a part of France’s coat of arms, the difficulty in finding and producing the blue pigment made it a rare and expensive piece that only the wealthy could afford.

Its frequent use in paintings depicting the mythical King Arthur further enhanced its reputation as a color of extravagance.

Spiritual meaning of the color blue

Much like spirituality, colors are a form of non-physical and non-verbal communication. Because of its association with positive qualities, the color blue has been the shade preferred by most for providing feelings of friendship, harmony, and balance over time.

Known to play a crucial role in the flow of energy in the body, the Vishuddha, or the blue encourages communication, inspires self-expression, and enables us to speak the truth.

Recognized as the throat chakra, any imbalance manifests as difficulty expressing our feelings, thoughts, and judgments. It also makes us highly critical of others and ourselves.

Soul color and the color of the infinite

Recognized for its ability to provide hints about our physical, emotional, and spiritual well-being, those with the blue soul color are more relaxed, easy to get along with, and serene.

The blue color’s association with the sky and the ocean, both seemingly boundless, quickly makes it the color of the infinite. Blue, as a soul color, reflects peace, quietness, and calmness.

Feng Shui combines colors, symbols, and structure to provide all the necessary physical and spiritual modifications to boost a person’s life. Symbolizing the open sky and Earth’s far-reaching waters, the blue color works best for those who need peace and calm.

As a color that promotes good health, it is best placed in bedrooms and living spaces; consider areas where we rest.

Top 3 blue gemstones and their impact

Long held as the color that symbolizes sensitivity, intuition, and freedom, many people adorn themselves with blue gemstones. Often used in unblocking and cleansing the chakra, here’s our list of the top 3 gems in this color.

Aquamarine is a famous stone used in various types of jewelry that indicates financial stability, good health, and fruitful married life. Aquamarine is also the birthstone for March. This highly transparent gem catches more light, allowing it to sparkle more than the others.

A rock composed of natural minerals such as calcite, lazurite, and sparkling pyrite, lapis lazuli is one of the oldest gems used to adorn jewelry. It is found in various countries, and numerous traditions see it as a symbol of strength, royalty, truth, and wisdom. It is also known for warding off evil and improving the wearer’s eyesight.

Sapphires are acknowledged as the world’s most famous blue gemstones. Many favor them for their resistance to damage and their intense blue color. A symbol of love, spiritual insight, loyalty, and protection, its strong symbolism and durability make it an ideal gem for wedding and engagement rings.

While it is often associated with excellence and high distinction, the blue color has long held significance in art, politics, and culture. Here’s what the symbolism of blue tells us in our everyday lives.

The best phrases and idioms about the color blue

Being blue-blooded indicates that one is of noble birth, including the king, the queen, and the other royal family members.

Out of the blue

Often used to describe an event that unexpectedly took place, this expression was derived from a clear blue sky from which nothing out of the ordinary is expected.

Once in a blue moon

Much like the rarity of this phenomenon, we use this phrase to describe something rare and uncommon.

Like music, colors hit us in the most potent and unexplainable ways. Here are a few of the songs that help chase the blues away.

Originating in the African-American communities in the southern United States, blues music is a fusion of religious hymns and songs belted out by those who work in agricultural fields. Featuring the lyrical traditions of the Scottish, English, and Irish, it expressed the sorrows and desires of those who suffered from segregation and slavery in the early 20th century.

This musical genre derived its name from the blue devils, which many perceive as depression and sadness.

Tangled Up In Blue (Bob Dylan)

Inspired by an event in the singer/songwriter’s life, the song talked about a woman that Bob Dylan once knew.

Symbolizing his childhood, Pink Floyd sings about his journey to make a life of his own and how he is bidding his last goodbye.

As this shoe style indicated luxury in the South, the song talked about Elvis’ riches and his fondness for them.

A piece of clothing that implies sincerity and competence, wearing blue is considered by fashion experts the best way to create a good impression and set your best foot forward.

Widely used in uniforms, it allows its wearer to communicate a message of authority and confidence. Symbolizing nobility, loyalty, and peace, it doesn’t surprise that it is the color of choice for weddings, baptisms, and other important life events.