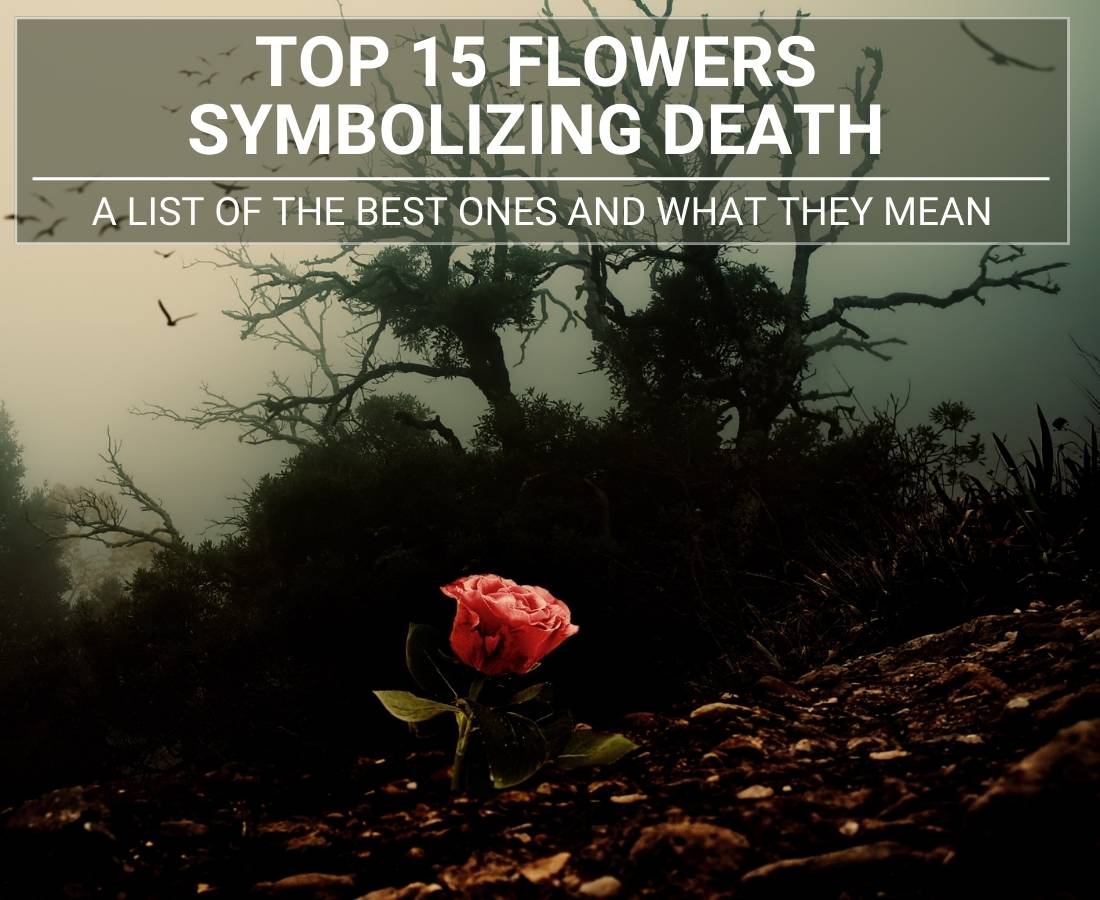 Death is a natural part of life, and it happens to everyone eventually. One way that people deal with death is by using symbols. One common symbol of death is flowers.

Flowers have been associated with death for centuries. In some cultures, flowers are seen as a way to respect the dead. They are also often used in funerals and gravesites. In this article, you’ll find the top 15 flowers that symbolize death.

While white roses are traditionally associated with purity and innocence, black roses are often seen as a symbol of death. This is because black roses are not a natural color for roses, so they must be dyed.

The process of dying flowers is called “senescence,” which comes from the Latin meaning ‘to grow old.

(Black roses do not exist naturally, although scientists have managed to darken the color on some selections).

Carnations are one of the most commonly used flowers in funerals, and as such, they have come to symbolize death. They are also inexpensive flowers, making them a good choice for people who want to honor their loved ones without spending a lot of money.

Hyacinths are beautiful flowers that have a deep meaning. The name of these flowers appears in the title of the painting “The Death of Hyacinthus,” which associates them with the dead.

The painting was made in 1752, and since then, the Hyacinths have been commonly used at funerals to honor the deceased.

Forget-me-nots first gained their dark reputation in medieval times. It was believed that if you gave a loved one a forget-me-not before they died, they would remember you in the afterlife.

This led many people to give forget-me-nots to those who were dying or grieving to remember their lost loved ones.

In some cultures, lilies are associated with funerals and graves. In others, lilies are seen as symbols of transformation or rebirth.

In the US, Lilies are one of the most common funeral flowers.

They are often seen as a symbol of the soul’s ascent to heaven. White lilies are particularly associated with purity and innocence, making them popular for funerals.

Lilies can also symbolize new beginnings. In ancient Greece, lilies were associated with Demeter, the goddess of fertility and agriculture. Lilies were said to bloom in her sacred garden, and they came to symbolize rebirth and new life.

Orchids are often associated with death and mourning. In many cultures, they are seen as symbols of the afterlife and are used in funerals and gravesites.

Orchids can also represent the impermanence of life and the fragility of existence. For some, the flower is a reminder that death is inevitable and that life is fleeting.

The peace lily is a popular choice for funeral arrangements as its name implies a sense of calm and serenity. These beautiful flowers represent a restful afterlife in heaven.

They can be used at funerals or hospitals to help create a smooth transition into the afterlife.

Poppies have been associated with a night of everlasting sleep, much like the transition into death. Because of their association with a sense of unconsciousness, these flowers have sometimes been considered back luck, although that can be debated.

In ‘The Wizard of Oz,‘ the characters in the story come across a field of poppies, almost falling to their deaths.

The poppy is also a symbol of remembrance for all who have served and lost in war. The flower grew on fields near trenches, and battlefields around Europe where it became something that everyone knew well – from French troops to British soldiers fighting abroad or even Americans joining up after features such as “Over There.” This popularity can be attributed largely due to its association with Armistice Day (11 November), which honors those who died during conflicts worldwide from 1914-18and World War II(1939–45).

In some cultures, the blue iris is also a flower that has been considered a bad omen. The rich blue hue of these flowers creates an ambiance of peace, which can be associated with eternal slumber.

While these flowers are beautiful, some view them as sad, depressing, or simply a symbol of the dead.

Dahlias have long been associated with death and mourning. In Mexico, they are often used in Day of the Dead celebrations, and in Europe, they were once used to adorn graves.

The dark, rich colors of dahlias represent the cycle of life and death, and their large blooms are thought to symbolize the frailty of life. While dahlias may not be the most cheerful flowers, their unique beauty makes them a popular choice for those looking to add a touch of darkness to their garden.

Lilacs symbolize the brevity of life and the sorrow of losing a loved one. The flowers also represent hope and rebirth.

Lilacs are also symbols of springtime and new beginnings despite their association with death.

The Chinese associate these flowers with death, but they also believe that flowers can bring good luck and fortune.

The ancient Greeks believed that the chrysanthemum flower symbolizes death and rebirth. This is because the flower blooms in the autumn and dies in the winter, only to be reborn again in the spring.

Wolfsbane is often associated with death, as it is a poisonous plant. In folklore, it is said to be able to kill werewolves, and so it was used as a weapon against them.

Wolfsbane was used in magic spells and charms to protect against evil spirits and witches.

Monkey orchids are one of the most popular flowers in Japan. These flowers are also referred to as the Dracula flower, associating them with vampires and the dead.

The flowers are often used to decorate gravesites and memorials. The monkey orchid is a popular choice for funeral wreaths and bouquets.

For more information on flowers that symbolize death, check out this video!

We also have lists of animals representing death and birds symbolizing death.