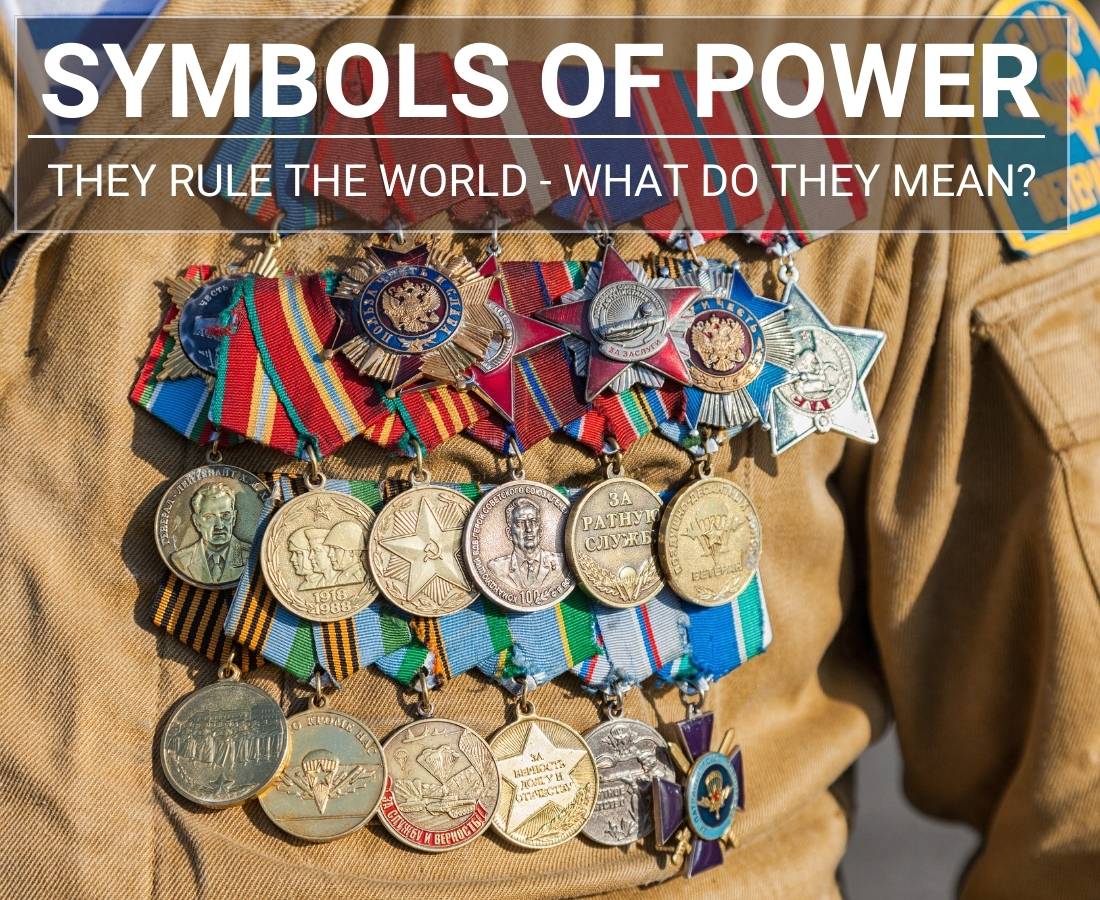 When you think of the word ‘power,’ what comes to mind? Some will think of money, government, and status, while others think of peace, freedom, and contentment.

There are symbols of power all around us, and we may not even be aware of them. These symbols can be seen in the way people dress, the way they behave, and the language they use. Symbols of power can also be found in architecture, art, and advertising. What do these symbols mean, and how do they influence our behavior?

In this article, you’ll find some interesting symbols for power and how power is depicted in different cultures and learn how to cultivate power in your life.

Symbols of power in society

In societies symbols of power can be divided into two categories: those that represent authority, and those that represent wealth. Symbols of authority include things like uniforms, badges, and titles. These symbols let others know that we are in a position of power and should be respected. Symbols of wealth include things like expensive cars, jewelry, and houses. These symbols let others know that we have money and are successful.

“Mastering others is strength. Mastering yourself is true power.”

Symbols of power can have a significant impact on our behavior. For example, studies have shown that people are more likely to obey orders from someone in a uniform than someone not in a uniform. This is because we associate uniforms with authority and respect.

Symbols of power are everywhere, but they are not always obvious. To recognize them, we need to be aware of the different ways that people can display symbols of power. Here are some examples:

The symbols of power

Power symbolism comes in many forms, such as government structures, a state of being, and nature itself.

Government represents the people who have the ability to make decisions and enact change. The government is a representation of the will of the people; through this institution, we express our desires as a society.

The government is also a source of stability, ensuring that there is order in our lives and that we are able to live in harmony with one another.

The fist can be seen as a symbol of unity, as it brings people together for a common cause. It can also be seen as a sign of defiance, often used to protest against injustice or oppression.

Many movements have used the first symbol for cultivating the power to make a change.

Some people believe that money is a symbol of power. They think that having an abundance of money means having power over themselves or some external aspect of their life.

But, some believe that power is not necessarily connected to money. A person can have power without having a lot of money, and vice versa.

The eye (eye of providence) can see into the soul, and it is the window to the soul. The eye is also a symbol of knowledge and wisdom.

In many cultures, the eye is seen as a protective force, and it is believed that it can ward off evil spirits. The eye is also a symbol of royalty and authority.

Even something as simple as a blade of grass can be a reminder that nature is always moving, always growing, always changing.

Lightning is one of the most powerful forces of nature. Full of power and electricity, lightning symbolism often suggests change, excitement, and danger.

Gods have also been associated with lightning bolts, the power of this phenomenon originating from the sky above.

The Stropholos of Hecate, sometimes referred to as Hecate’s Wheel, is an ancient Greek emblem used to depict the Moon Goddess Hecate. The symbol consists of a circle with three radial spokes. It is often seen in magical and occult contexts, as it is associated with Hecate’s role as a goddess of sorcery and magic.

The Eye of Horus Swarowski Symbolic Evil Eye Pendant Necklace
4.8
$115.00$78.95
Check on Amazon
The classic cross is among the most widely used protective symbols

The Ankh is an ancient Egyptian symbol that represents life and immortality. It is often seen in funerary contexts, as it was thought to protect the dead in the afterlife. The Ankh is also a popular symbol in Egyptian revival architecture and art.

The power of love

Finally, it is important to remember that the most powerful symbol of all is love. Love can conquer hatred, overcome fear, and break down barriers. It is the ultimate symbol of power.

“Power is of two kinds. One is obtained by the fear of punishment and the other by acts of love. Power based on love is a thousand times more effective and permanent then the one derived from fear of punishment.”

The neutrality of the symbols

“A crown is merely a hat that lets the rain in.”

Throughout history, power has been associated with animals, colors, religion, and planets.

Christians also believe the cross is a symbol of power against evil. It represents the victory of good over evil. The cross is a reminder that God is more powerful than any force in the world. It is a sign of hope and a symbol of God’s love for humanity.

In China, the dragon represents strength and authority and is often seen as a positive force. Dragons are often associated with wisdom and good luck and are revered by many people in China.

They are a very powerful being that some Chinese folklore believes once existed and dominated the earth. These creatures are used as symbols in artwork, parades, clothing, and design throughout China.

The yin-yang is a symbol that is widely recognized in Chinese culture. It represents the perfect balance of forces in the universe and is often used to represent power.

The yin-yang has been used in art, literature, and philosophy for centuries and continues to be an important part of Chinese culture today.

In ancient Egypt, the sun was a symbol of power. The sun was seen as the source of all life, and it was believed that it had the power to protect and heal.

The sun god Ra was one of the most important gods in the Egyptian pantheon, and he was often depicted as a falcon or a man with a solar disk on his head. The sun was also associated with other powerful gods such as Horus and Isis.

Cats were also a symbol of power. The Egyptians saw cats as goddesses and revered them.

In fact, cats were so important to the Egyptians that when a cat died, the family would shave off their eyebrows as a sign of mourning. Cats were also believed to have special powers, such as the ability to see into the future.

Pyramids were also a symbol of power in ancient Egypt. They were often built to be the final resting place for a Pharaoh or other powerful figures.

The largest and most famous pyramid is the Great Pyramid of Giza, which was built for Pharaoh Khufu. Pyramids were built using massive amounts of stone and labor, which took many years to complete. They are a reminder of the great power and wealth of the ancient Egyptian civilization.

The bald eagle is the national bird of the United States of America and has been used as a symbol of power since the 18th century. The bald eagle’s wingspan can reach up to 7 feet, and its talons are incredibly powerful, able to kill prey with one swift strike.

The US military and government have used the bald eagle’s powerful image throughout history, and it remains an enduring symbol of strength and freedom today.

You can experience seeing symbols for power in your dreams, and they often contain a specific message for each individual.

Seeing an eye in your dream

If you dream of eyes, it can signify that the universe is protecting you. Someone in your life may have ill intentions, or maybe you’re going through a difficult time.

Either way, your dreams show you the guidance and safety around you now.

Seeing a lightning bolt in your dream

Lightning is a magnificent sight to see, even in your dreams! If you dream of lightning, it may be a sign from the universe to “wake up” or be aware of your current situation.

When lightning strikes, it illuminates everything around it. There may be something in your life that is unseen or hidden that you would benefit from uncovering for yourself.

Dreaming of the government

Dreaming of the government is often associated with extreme circumstances, such as legal issues, the apocalypse, or mass hysteria. This is because the government holds a large portion of power within a society.

If you’ve had a dream about the government, it may be a sign that you feel disempowered in some area of your life because you’re giving your power to external circumstances.

Check out this video for more symbolism of power!