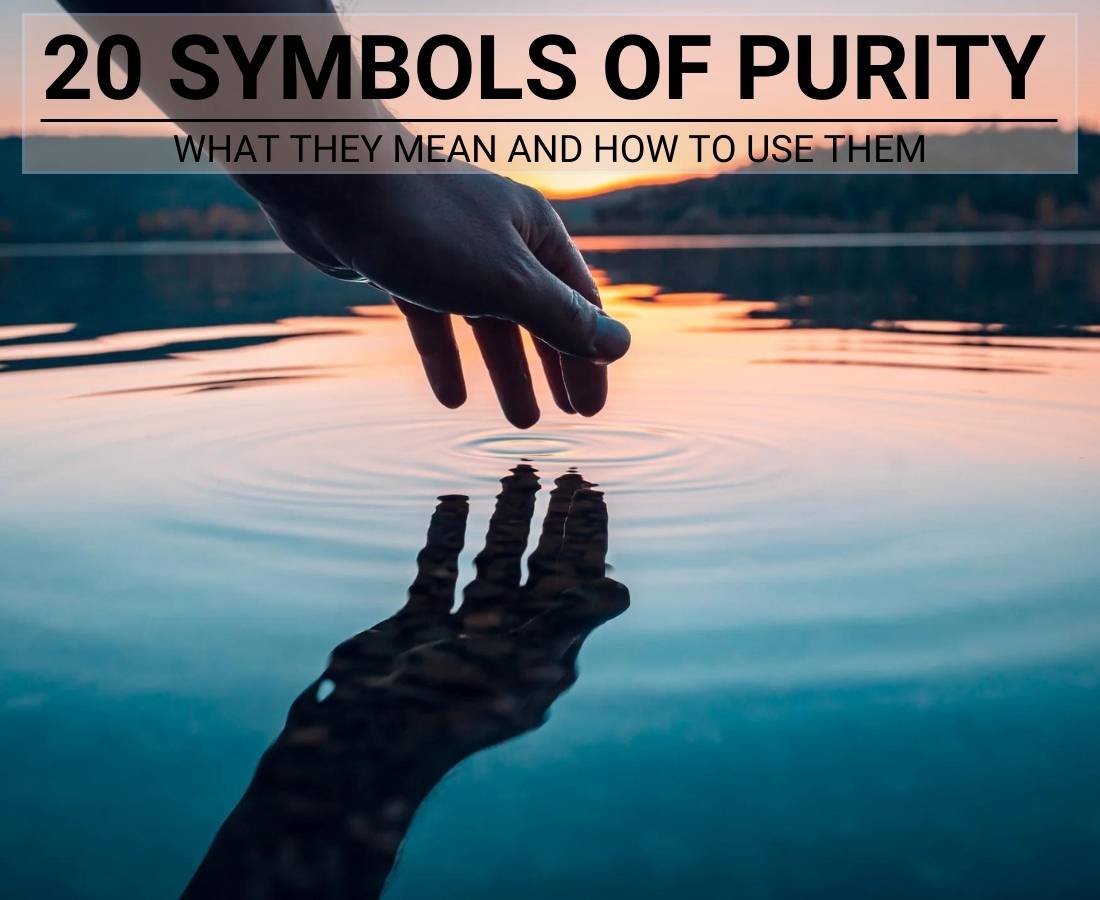 What does purity mean for you? Purity has been an idea depicted in almost every culture and religion throughout history.

The idea of this word has been influenced by religious beliefs, gender, and spirituality. Follow along for 20 of the best symbols for purity found throughout history. You are reminded of your power and purity when wearing or carrying a clear quartz crystal. The crystal helps you to connect with your highest self and live in alignment with your truth.

In Christianity, the lamb is often used to represent Jesus Christ, who was sacrificed for the sins of humanity. The animal is also seen as a symbol of innocence and sacrifice in other religions, such as Islam and Judaism.

In ancient Egypt, lambs were sacrificed to the gods and mummified after death. Today, many people still see the lamb as a symbol of purity and innocence.

Read more about the lamb symbolism

The ocean represents purity, serenity, and peace. The ocean is also a source of life and sustenance for many creatures.

It is a place of refuge and a place of healing. The ocean has the power to cleanse and purify.

The ocean is a powerful force that can wash away all the impurities in our lives. When we feel lost or confused, we can go to the ocean to find our way again.

Nature has long been seen as a symbol of purity. In many cultures, it is seen as a representation of new beginnings and the natural state of being. It is often used in religious ceremonies and rituals to cleanse oneself or start anew.

This symbolism can be traced back to ancient times when people saw nature as something untainted by man’s hand. It was a place of refuge, where one could go to escape the world’s chaos.

White is seen as the color of innocence and virtue. This is because white represents cleanliness and purity. When someone is pure, they are free from sin or guilt.

They have not been tainted by the world around them. White also symbolizes new beginnings and fresh starts.

This is why many brides wear white on their wedding day. It represents their purity and readiness to start a new life with their husband.

In many cultures, yellow is associated with purity. In Hinduism, for example, the color is often used to decorate temples and holy sites. It’s also a popular color for brides in India.

In the Western world, yellow is typically seen as the color of innocence and purity. However, in some Eastern cultures, yellow is associated with death and mourning.

The dove has been associated with these qualities for centuries and is often seen in art and literature as a representation of hope and peace. The dove is also popular for religious iconography, representing the Holy Spirit in Christianity.

In many cultures, the dove is seen as a positive symbol, and its white feathers are often used in wedding ceremonies to represent new beginnings.

Read more about the dove symbolism

Salt purifies people or objects in many other religious ceremonies and traditions. Some people even take salt baths as they believe the mineral helps remove negative energies and helps resolve unwanted emotions within the body.

Rain washes away dirt and impurities, leaving behind fresh, clean Earth. Rain is also associated with fresh starts. When something is new, it is often seen as being pure and free of any impurities.

A waterfall is one of the most beautiful natural wonders. They are often found in forests and near mountains. Waterfalls are sometimes seen as a place of spiritual power and healing.

Waterfalls are a sign of nature’s abundance and fertility. They represent the cycle of life, death, and rebirth. Waterfalls remind us that even though times may be tough, there is always hope for new beginnings.

Ailm is a Celtic symbol of purity. Ailm represents the highest point on the tree of life and is believed to be a doorway to the other world. The leaves of the ailm tree are said to have healing properties, and the tree itself is considered sacred.

Children are seen as innocent and free from the troubles of the world. They are also seen as being in a time of exploration and discovery. For these reasons, childhood is often used as a metaphor for innocence and purity.

The fool is often interpreted in tarot readings as a sign of new beginnings, hope, and potential. The card can also represent naivetý, innocence, and childlike wonder. To some, the fool may represent the querent themselves.

Choose the tarot reading psychic that best suits you & get 5 min FREE for the 1st session!

Tested and experienced psychic advisors are waiting to give their insight, day or night. In Buddhism, the lotus flower is often cited as a symbol of purity. The reason for this is that the lotus grows in muddy water yet still manages to produce a beautiful blossom. For Buddhists, this is a powerful metaphor for how we can rise above our difficult circumstances and emerge as better people.

Whether you see the butterfly as a symbol of rebirth or new beginnings, its appeal is universal. The beautiful and delicate butterfly is an apt symbol of purity.

The creature’s short life span and transformation from caterpillar to winged adult make it a powerful metaphor for hope and change.

Read more about the butterfly symbolism

This flower is also seen as a symbol of purity in other religions, such as Buddhism and Hinduism. The lily of the valley is a beautiful flower representing innocence and kindness.

The cross is a widely recognized symbol of Christianity. It is often used to represent the suffering and sacrifice of Jesus Christ. The cross is also a symbol of purity and new life.

In many cultures, the sun is seen as a symbol of purity. For example, the sun god Apollo was often associated with purity and healing in ancient Greece.

In the Christian tradition, Jesus is often referred to as the “Son of God” and is seen as a symbol of purity and hope. In many Native American cultures, the sun is seen as a powerful force that can bring about positive change.

A diamond is one of the hardest natural substances on Earth, and it has been used for centuries to symbolize purity, strength, and invincibility.

A diamond is also a precious stone, and its value has been increasing steadily for centuries. The most famous diamonds in the world are the Hope Diamond, the Koh-i-Noor Diamond, and the Regent Diamond.

Sage is used for cleansing and purification rituals. This herb is thought to be able to cleanse negative energy and create a space for positive energy.

Sage is often used in smudging ceremonies, where sage is burned, and the smoke wafted around the space or person to be cleansed.

For more information on purity, check out this video!